People take the fight against traditional leaders to president Ramaphosa 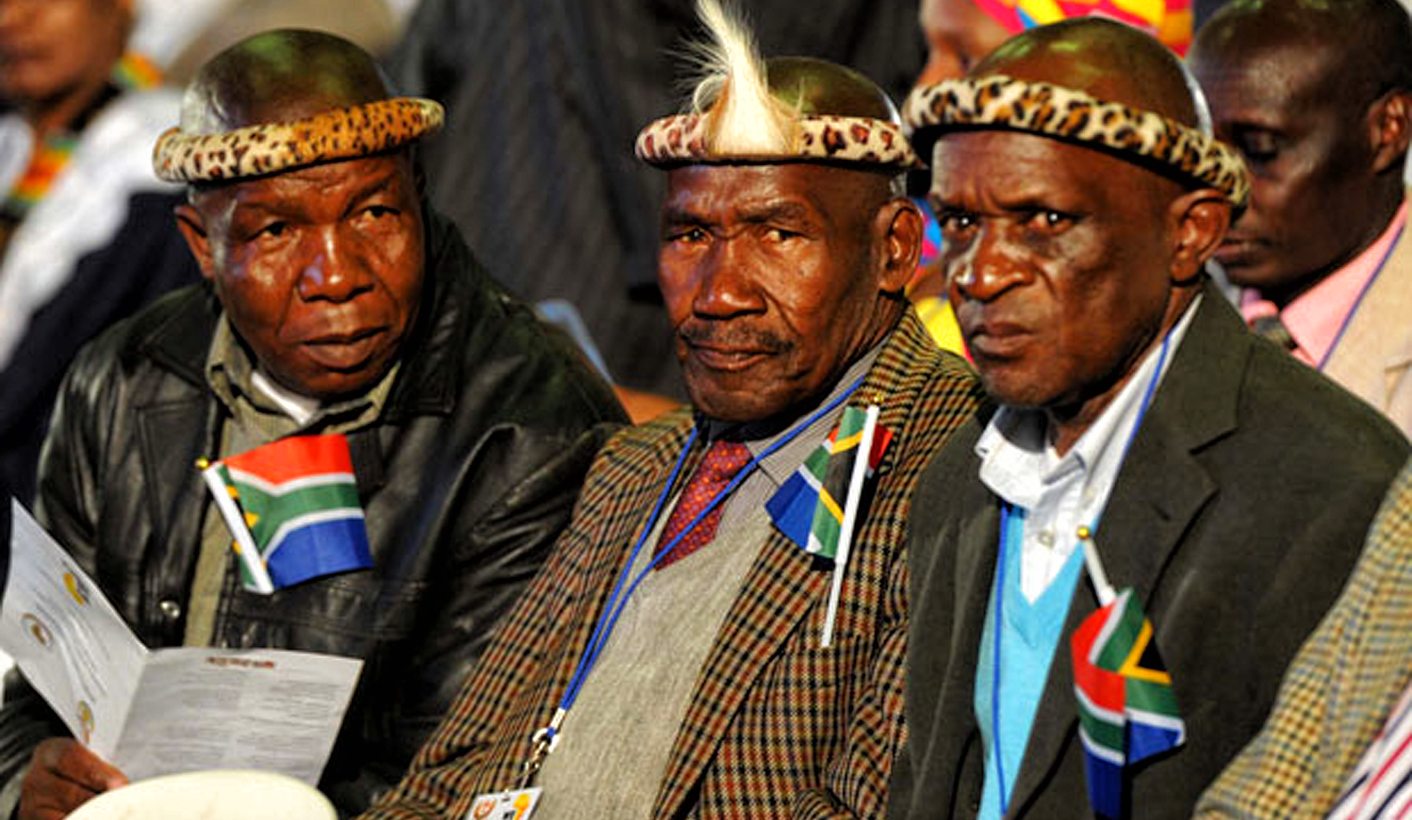 Rural communities across the country marched to the Union Buildings on Wednesday to demand more land rights and for President Cyril Ramaphosa not to sign into law two key bills affecting them.

Under the banner of the Alliance for Rural Democracy, South Africans from seven provinces trekked from their rural communities to the Union Buildings in Pretoria on Wednesday, 5 June 2019. Their aim: to demand President Cyril Ramaphosa not sign the Traditional Courts Bill (also known as the Bantustans Bill) and the Traditional Khoisan Leadership Bill (TKLB).

After a 3.2km walk from Paul Kruger Square in Pretoria, members from rural community organisations arrived at the Union Buildings, where they were addressed by their leaders, affectionately introduced as comrades.

“We want Ramaphosa to come down here,” said Mbhekiseni Mavuso from KwaZulu-Natal, adding that the TKLB conferred powers on traditional leaders that would allow them to “chase someone away” from the land. This could be a person with whom they had quarrelled.

According to the Land Accountability Research Centre (LARC), which is part of the alliance, although this “will give overdue recognition to the Khoi and San communities”, it “poses a serious threat to rural democracy for South Africa’s rural citizens in the former Bantustans”.

Under Clause 24 of the Bill, traditional councils can enter into agreements with third parties without obtaining the consent of the community – although it says “in consultation” there is no requirement for consent.

Mavuso argued that this would allow traditional leaders to terrorise people and even go to the lengths of killing them. The only thing people could say was “you have no right to do that”, but they could continue to do it.

These were the things we faced, Mavuso said. They had gathered there to tell Ramaphosa to not allow this.

Humphrey Magagula, from Limpopo, spoke about the Traditional Courts Bill, saying the “law must be made by people and not by the traditional leaders”.

“If you look here, we are at the Union Buildings, at a time when (we) should be at work,” said Magagula.

Traditional leaders were sitting on mines in “our communities” and they only shared among themselves, he said.

Zukiswa White, media and communications officer for the alliance, said that when talking about the TKLB, the government was using a genuine struggle for the recognition of the Khoisan people to trample on the rights of rural communities by giving the traditional leaders custodianship over their land.

“They can use and misuse the land without consulting let alone (getting the) consent of the community. Mining deals can be made without their approval,” said White.

This Bill cut the red tape for traditional leaders and would allow them to use land that belonged the community however they wished, White said. It was a sneaky way to give more power to chiefs who were not elected.

The alliance believes rural communities should have a say in how the land is used, without the red tape of a custodian chief.

After the speeches on stage, the group continued to sing, as they had done during their march, while they waited for Ramaphosa on the lawn at the Union Buildings.

According to Tshepiso Fokane, a researcher for the Alliance for Rural Democracy, there had been a constant historical campaign by rural communities to obtain their rights stemming from the fight to repeal the Communal Land Rights Act, which took decision-making away from households and into traditional councils, as far back as 1994.

Fokane said the bills, if signed into law, would erase the strides that had been made by rural communities over the years.

The Traditional Leadership and Governance Framework Act was supposed to have changed the apartheid architecture of traditional authority in 2003 by placing members of the local community in 40% of the seats in traditional councils.

And although this process has been delayed over the years, the TKLB would replace it and reverse the human rights progress.

Concurrently, the rural communities are fighting the Traditional Courts Bill, which would create two parallels of the justice system.

White said that this was out of order in accordance with the Constitution and democracy.

Fokane said the Traditional Courts Bill would be enacted in former homelands where the boundaries had not changed at all but in name, a process that prejudiced rural communities.

If a person decided not to pay levies enacted by traditional leaders whereas they paid tax, she said, they were at the mercy of the people whom they did not pay in the traditional courts.

In combination, these two bills will mean parallel systems of governance (by the TKLB giving power over communities to traditional councils rather than municipalities) and access to the law (through the traditional courts instead of the national justice system). Rural communities would continue to be excluded from access to land, which was their only way of making a living, said White.

Mandla Feni, the chief director of corporate services in the Presidency, met the marchers. He signed a memorandum of demands, which included stopping the two bills and giving more power to communities.

He apologised for the delay in coming to accept the memorandum and gave assurances that the president would respond in 14 days.

Constance Mogale, national co-ordinator of the alliance, said what they were able to do today had given her hope. People came from across seven provinces to say they wanted to be recognised.

“I was inspired by the resilience of the rural communities who arrived from across the country. Some in the early hours of the night and in the cold,” said Mogale.

Even though her legs hurt, she said she was happy they marched and were united on these issues. DM