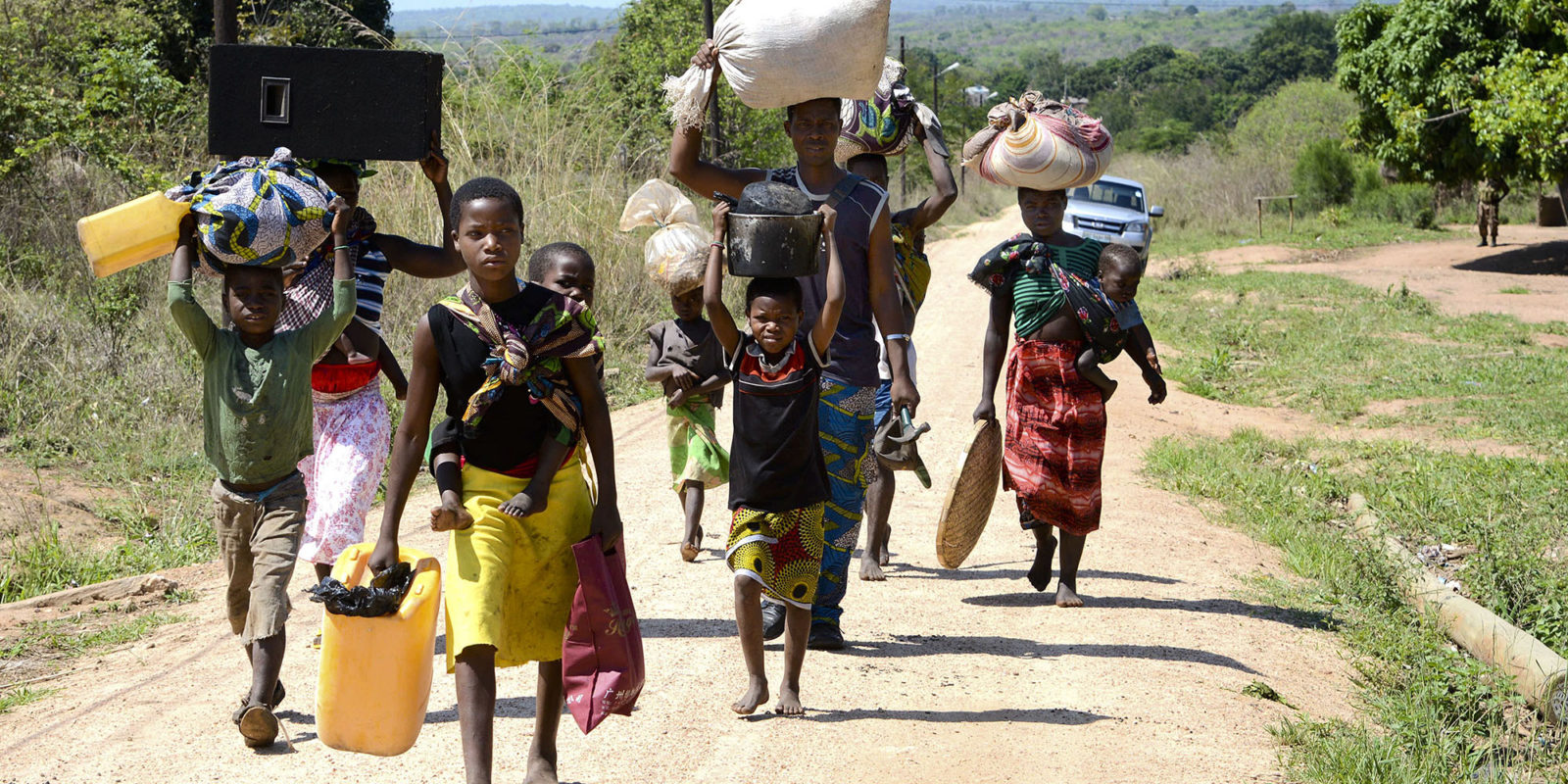 Islamic State has its eyes on the country, with the environment in northern Mozambique now regarded as a perfect gateway appropriate to its strategy. (Photo: EPA/ANTONIO SILVA)

The escalating attacks in northern Mozambique are now being claimed by Islamic State. They signal a significant shift in the terror group’s strategy. Urgent intervention is needed before it becomes a full-blown regional crisis.

On 4 June 2019, the Islamic State (IS) claimed credit for an attack in Mozambique under the banner of the Islamic State Central Africa Province (Isca), saying: “The soldiers of the Caliphate were able to repulse an attack by the Crusader Mozambican army in Metubi village, in the Mocimboa area. They clashed with them with a variety of weapons, killing and wounding a number of them. The mujahideen captured weapons, ammunition, and rockets as spoils.”

The attack most probably refers to that of 28 May 2019 in the Macomia district, in which a truck was ambushed. Source reports refer to about 15 people killed and say weapons were seized as soldiers were part of the group being transported. During the ambush “homemade bombs” were used.

A photo report showing weapons seized interestingly show South African ration packs, which could have been distributed as part of cyclone relief operations.

Inevitably, the question arises – has the motivation for attacks in Cabo Delgado stepped out of the shadow of searching for a cause? To answer this question, we need to read this claim in the context of the current position, strategy and tactics of the Islamic State.

On 29 April 2019, Islamic State’s official al-Furqan channel released a video message by its leader, Abu Bakr al-Baghdadi, titled “In the hospitality of amir al-mu’minin”. The video is of paramount importance in that it redefines the role of al-Baghdadi, but also announces the Islamic State’s renewed strategy of an “expanded jihad”.

Compared to his appearance on 5 July 2014, as Caliph of the Caliphate, the video portrays al-Baghdadi as a fighter, displaying him as an operational leader in control of all actions taken by Islamic State commanders wherever attacks are claimed.

Second, Africa did not escape his messages, with references to the recognition of the Islamic State in the Greater Sahel (ISGS) – active in Niger, Mali, Burkina Faso, Algeria and Sudan. In the video al-Baghdadi says he regrets that people have “replaced one tyrant by another” and believes that only “jihad can suppress tyrants”.

The video also shows al-Baghdadi receiving “reports” from commanders from several wilayahs (provinces), and with that “officially acknowledges” the Islamic State relying on expansion via an expanded jihad.

This, however, is not the first reference to a change in Islamic State tactics. In April 2019, the Islamic State’s official al Nabaa weekly propaganda magazine put forward this change. The article states that the insurgency focus is one in which attacks are aimed at seizing weapon resources and damaging infrastructure. The article also advises its commanders to refrain from open confrontation (for translation refer to Aymenn Jawad Al-Tamimi’s blog):

“Recently there have been multiple expeditions by the mujahideen of the Islamic State – for which God Almighty granted them success – against villages and localities in different areas, during which the mujahideen managed to take them over temporarily, in order to realise aims defined beforehand, then withdraw from the area, before the enemy forces managed to reach them in order to rescue their soldiers or supporters.”

The Islamic State message is clear: where opportunities avail, attacks will be claimed so as to reinforce a message that the implosion of the Caliphate does not imply a final victory in which the group has been defeated.

For this strategy to succeed the Caliphate has merely diversified into wilayahs where the group is taking the lead in the fight against the kufar. Hence, the Islamic State will find homes in areas of instability, a lack of government to counter attacks, and maintain control and, more importantly, will exploit all available opportunities to entrench itself in areas not comparable to that of Iraq and Syria.

Africa is not escaping this reality, as seen in a series of claims of credit in the Democratic Republic of the Congo (DRC) and now Mozambique.

For this to succeed there are certain prerequisites:

First, the Islamic State needs proxies already present in areas of conflict. In the case of the DRC, the Allied Democratic Forces (ADF) provided that opportunity, irrespective of the lack of any verified facts that the ADF is aligned to the Islamic State. In Mozambique, the Shabaab cells provide such an opportunity.

Second, there is a lack of government capacity in dealing with acts of violence: Attacks in northern Mozambique now number close to 150, with more than 170 people killed, and there are no signs it will end soon. Mozambique is faced with a tragedy showing no signs of abating. There are concerning indications of a shift in the group’s preferred targets, targeting vehicles, with the first attack on a convoy of petroleum company Anadarko.

In February 2019, an Anadarko convoy under the armed escort of Arkhe came under small arms fire while travelling from Mocimboa da Praia to the Afungi base close to Palma. The attack has resulted in a temporary suspension of construction at the liquefied natural gas (LNG) plant in Cabo Delgado. Added to this are indications of the use of more sophisticated weapons, such as machine guns, and during one attack an RPG rocket launcher most likely seized from government soldiers.

Villagers are left exposed to brutality and increased levels of fear, forcing the internal displacement of people at a macro level. Central to these attacks remain suspicions of Shabaab cell fighters taking the lead in executing them, motivated by an extremist Islamist ideology.

Aggravating the current dynamic is a Mozambican security force confronted with an unfamiliar threat, over-reliance on hard-power tactics such as indiscriminate arrests of suspects, a media clampdown, and more significantly a latent fear of directly confronting cells in the region. This last merely allows the free roaming of cells that thrive in a situation of lawlessness to instil fear and execute killings.

Third, there is a lack of trust in the government – non-state extremist groups and government security forces are both feared by local communities. The Mozambican government is struggling to be even close to gaining for several reasons, such as forces being poorly trained, ill-disciplined and lacking the necessary equipment to effectively deal with the threat.

During follow-up operations in response to militant attacks, the situation is further exacerbated by the hard-handed tactics used by government forces against the local population. The Mozambique Police arrested large numbers of potential suspects and kept them incarcerated for extended periods without any charges brought against them. Many innocent bystanders were also rounded up and put in jail.

In follow-up operations, the Mozambique Defence Force destroyed a large number of villages suspected of harbouring militants and in the process created even more discontent. An additional concern is a government seeking to limit information on actual developments in northern Mozambique, leaving more questions than answers. Hilary Matfess, in an article published in Foreign Policy, correctly notes that this merely aggravates the situation, and to add, where clarity lacks, the Islamic State will see opportunity.

Fourth, numbers are more important than content. The Islamic State is in search of demonstrating to its followers that the group is still taking the lead in a global jihad, and with that, where opportunity exists its focus will shift to use such opportunity, irrespective of actual verified accounts of fighter presence and its extent of influence. A scenario where +1 is better than zero is central to this strategy, and Mozambique has now been added to this list.

No matter the facts, the Islamic State is talking to a potential audience and fomenting a belief of expansion is their desire. For more on this refer to ISIS Relaunches as a Global Platform, by C Winter and Aymenn al-Tamimi. Responses stating that the Islamic State has no presence in Mozambique lack understanding of the current broader context. The Islamic State is not talking to them, but to its followers, and how they respond is paramount to Mozambique.

Last, the invisible threat: whereas the Caliphate provided a tangible target for counter-terrorism forces, following its implosion, the Islamic State is now relying on underground cells (irrespective of size and weapons) with Sri Lanka attack a prime example. Where foreign fighters stood out as a list of targets, cell member identities are set to become more complicated. Big-scale attacks are simply not the name of the game – for now, it is the type of attacks in Mozambique that suit their strategy to perfection.

Overall, in the words of Dr Colin P Clarke, the Islamic State “centre of gravity” is no longer confined to a single physical entity, but has shifted its tactics to where there are centres of gravity, and Mozambique has now been added to that list.

Irrespective of endless debates on the actual presence of Islamic State in Mozambique, there is one undeniable reality: Islamic State has its eyes on the country, with the environment in northern Mozambique now regarded as a perfect gateway appropriate to its strategy. More claims will follow.

The question is straightforward: Will the international community, the UN, the African Union and the Southern African Development Community wait for current violent trajectories to evolve into a full-blown crisis? Or are these bodies going to be proactive and intervene in time during the development phase of extremism where strategic interventions of soft- and hard-power approaches will have immediate and direct benefits not only for Mozambique, but the region? There is no doubt the human and financial cost will be dire, and such a crisis would feed into the Islamic State’s agenda.

Southern Africa is about to meet the Islamic State and it is not going to be a pleasant experience. DM