‘We are grieving — it feels like losing a family member’ 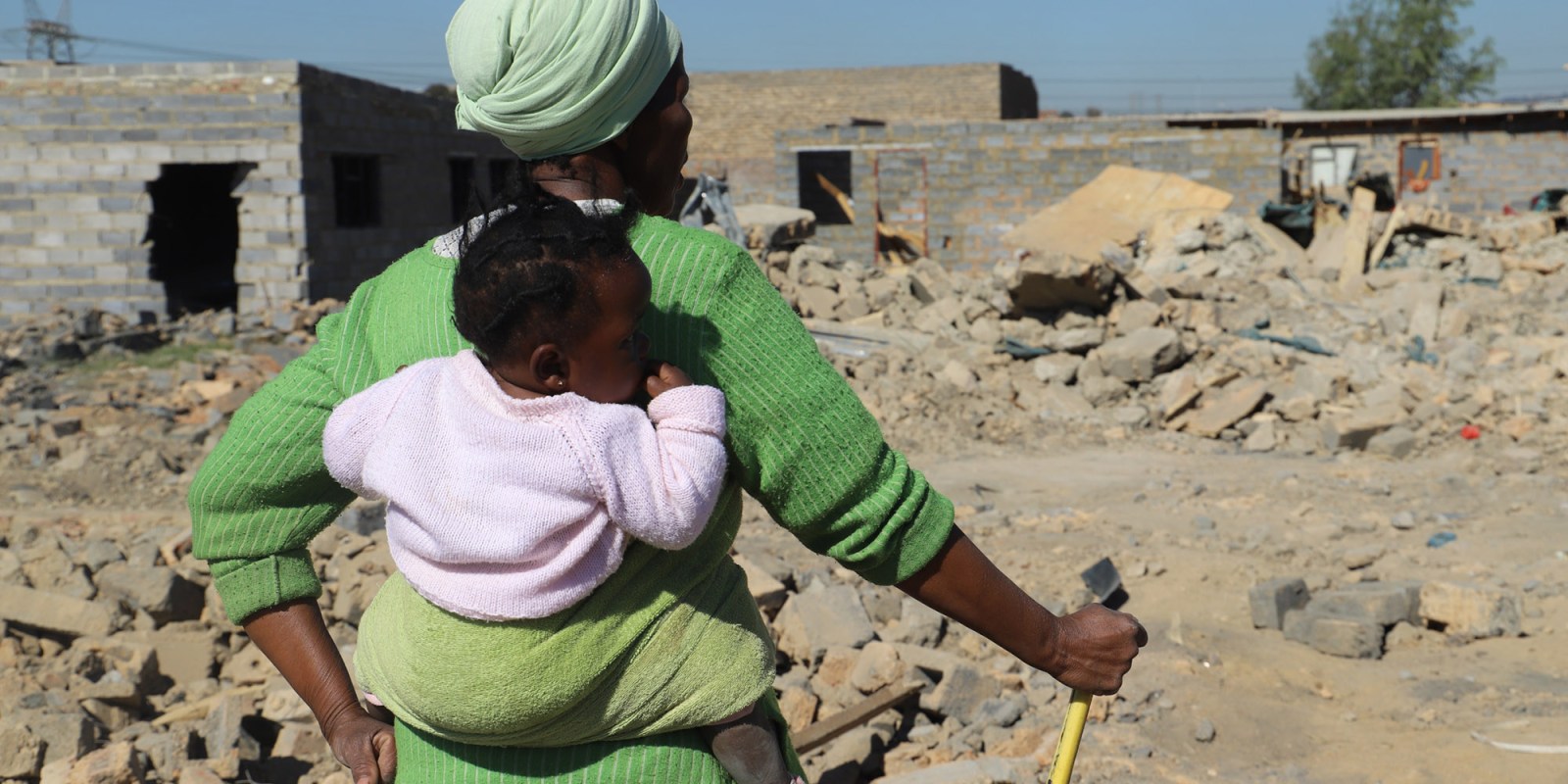 Joyce Monare carries her grandchild as she tries to gather what is left of her home that was demolished on Friday the 31 May 2019. She says that even when she sleeps she can hear the sound of the bulldozer. (Photo: Chanel Retief)

In the aftermath of the Alexandra evictions on Friday, residents say they can only liken the pain to losing a family member. Dozens of homes were destroyed when the Red Ants descended on the area.

Speaking to Daily Maverick on Monday 3 June 2019, Nowelile Nomaqhiza recalled the trauma visited on her family by the government she said she voted for. The 51-year-old domestic worker was at work when she was phoned and told her home was being taken down.

“At first I thought it was a joke, but knowing this country, I immediately asked to be excused from work.”

Nomaqhiza said she was horrified when she arrived to find that her home, which she had just moved into at the end of February 2019, had ceased to exist.

“I just fainted,” she said. However, this was the beginning of a terrible 24 hours which left her pregnant daughter, who was asleep in the house as the Red Ants closed in, in hospital.

Nomaqhiza’s daughter tried to salvage a few household items before their house was taken down. When the house was finally destroyed she decided to walk away, but was overcome with emotion when she heard the crashing sound of the demolition.

“She immediately started bleeding and I had to drop everything and rush her to the Masakhane Clinic. We took her to the clinic at 6pm, but she only managed to see a doctor after 12 midnight. We spent the night at the hospital, and all the while we kept thinking that we have no home to go back to,” said Nomaqhiza.

Doctors said the bleeding had been caused by the lifting of heavy goods as her daughter helped the family salvage some of their belongings. But they couldn’t save much and the only visible item was a half-filled bucket of mealie meal that stood among the ruins as she relived the family’s ordeal. The mealie meal was unusable as it was full of sand.

Doctors told Nomaqhiza her daughter’s bleeding had also been caused by the trauma she had endured after losing her home.

“We lost everything,” a distraught Nomaqhiza said. Her seven-year-old son’s dictionary lay among the rubble, with the light wind ironically blowing the half-torn pages to reveal a page with the word “destroy” at the top.

Nomaqhiza asked her neighbours to look after her younger son and pregnant daughter for a few days while she and her older son, who is in college, salvaged what they could.

The victims of the forced removals told Daily Maverick they were staying with neighbours. They put the blame squarely on President Cyril Ramaphosa and the ruling party and vowed they would never vote for the ANC again.

“They just wanted our votes. A few weeks after we voted for them they destroy our homes, which we built with our own hard-earned cash. What kind of government fails to understand that we saved them millions which could be channelled to building RDP houses for those who cannot afford to build for themselves? They are heartless,” said Joyce Monare, 54.

“What angers me is that they did this after we voted them into power, and during winter. “Outsiders are laughing at us. They say these people are not only xenophobic, but also capable of fighting among themselves,” said Monare, who is staying with a neighbour.

In April 2019 Alexandra residents took to the streets to protest against the dismal conditions in the area.

They continue to blame foreign nationals for their housing woes.

“Ramaphosa should get rid of all the foreigners, and instead, a few weeks after we voted for him, he destroys our houses. Ramaphosa is to blame for this mess,” said Monare.

She said everyone, including adults and children, would require counselling. “We are still traumatised. I can still hear the sound of bulldozers and trucks now and in my sleep.”

Monare said the first thing she did when the demolition crews arrived was to grab her three-month-old granddaughter and run out of the house.

“This is not (Herman) Mashaba’s fault, it’s the ANC’s. They put the blame on Mashaba — its wrong. The national government is responsible for this.”

In a statement on Monday, the ANC said City of Johannesburg Mayor Herman Mashaba was aware of the court order authorising the demolitions. But during his visit to Alexandra, also on Monday, Mashaba said “anyone talking about the court order is talking nonsense. We already know the people behind this. We cannot blame the JMPD.”

Mashaba promised residents whose houses had been demolished that the City would rebuild them.

“Tomorrow the department of housing, social development and other relevant stakeholders will come in the area to get in motion the process of rebuilding your houses and provide some counselling.”

Mashaba did not say when the rebuilding would begin, but added that there would be consequences for those responsible. He did not spell out what the consequences would be.

“I was on a plane waiting for take-off when I was informed of the forced removals,” Mashaba said.

Gauteng EFF chairperson Mandisa Mashego called for a separation of politics and government. Mashego said the mayor was not lying when he said he would rebuild the houses. She said 163 houses had been affected by the forced removals.

Asked why he was promising people the City would rebuild houses when the land had been illegally occupied, Mashaba asked: “What choice do I have?”

Asked who made the call for the evictions, Mashaba said “evil forces” were responsible, but added that he had yet to have full feedback on what had really transpired.

Mashego said the brutalisation of poor communities by the Red Ants had to end. She said the EFF was seeking legal solutions to the problems affecting residents.

“The people who came here… acted against the Constitution of the country. We need to stop the Red Ants countrywide. The battle for our immediate emancipation is coming to an end.,” said Mashego.

Yvonne Pilusa, 34, said: “I was going to move in on Sunday, a day before they destroyed my house. It’s painful. We are deep in debt because we took out loans to build these houses. I was happy that the days of paying rent were over as I had my own home. I even used up all my savings, but clearly, we lost. My only regret is voting for the ANC. Just after we voted they destroy our homes. They didn’t even warn us.

“We are grieving. This is so painful that it can only be likened to losing a family member. I will never vote again. We were meeting the government halfway and saved them millions they would incur building us RDP houses, but this is the thanks we get.

“We are made to suffer in our own country. We were given sponges and blankets, but where are we going to sleep with these? I don’t need a sponge or sanitary pads, I want my house. I always figured myself staying in my own house, moving around in my nightdress.”

Norman Masia, 39, said he had been over the moon as he finally had a home of his own.

All that remains as a reminder of his house is the baby powder he used to mark where his house once stood.

After Mashaba’s promise to rebuild their houses, residents burst into songs of excitement. Others said politicians were in a constant bickering contest and that they were not necessarily holding out too much hope over those promises. DM