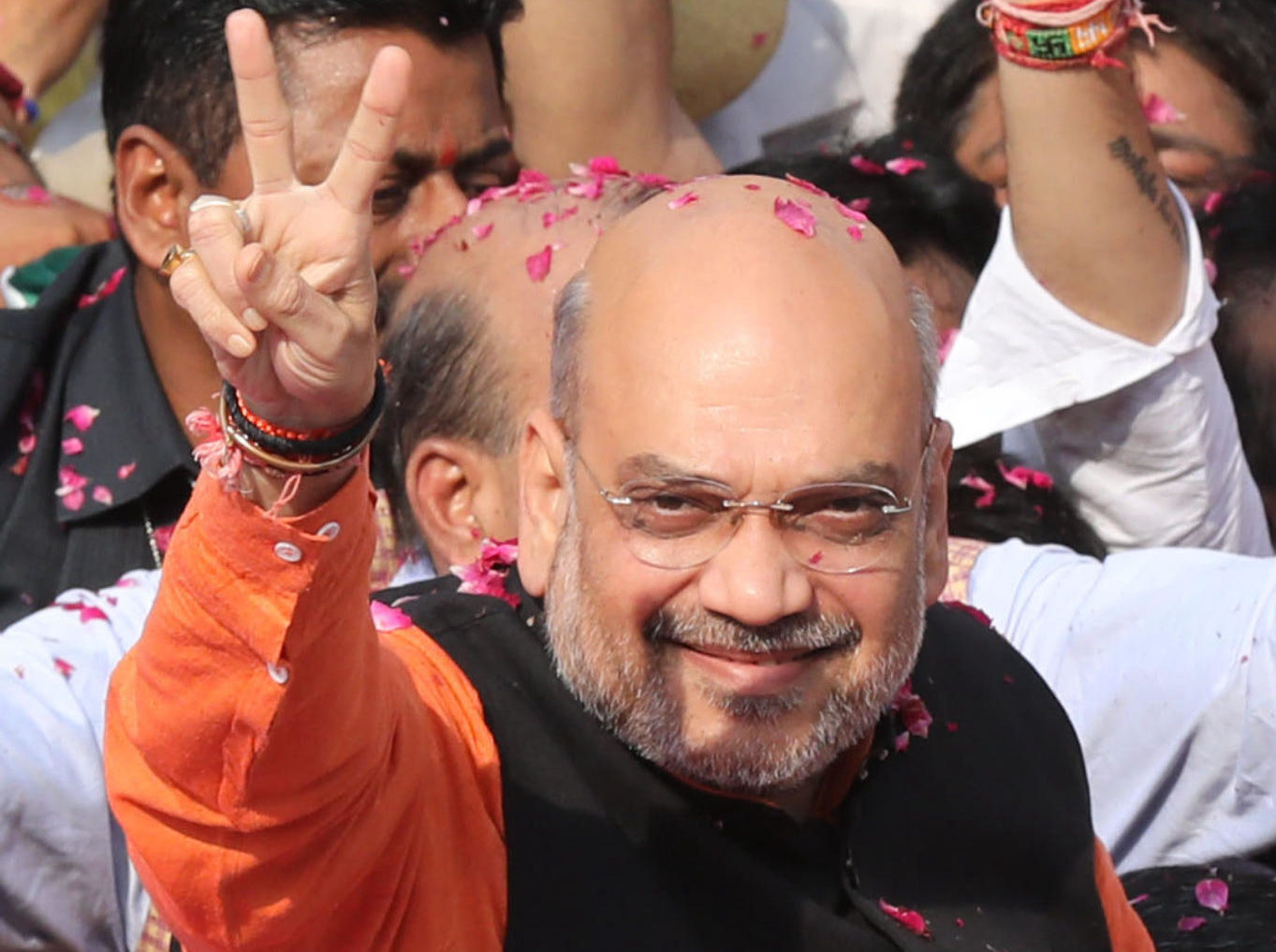 Amit Shah flashes a victory sign as he arrives at party headquarters in New Delhi, India, 23 May 2019. EPA-EFE/HARISH TYAGI

Despite his controversial past, Amit Shah has now cemented his role as the Prime Minister's confidant and enforcer. He can take policy decisions without the prime minister’s approval.

On May 17, just before the end of the election season, Indian journalists were abuzz with news that Prime Minister Narendra Modi would give his first-ever press conference. Modi has been the only prime minister in the history of independent India not to take questions from the press. But instead of a news conference, Modi delivered a monologue. When asked to take questions, he looked to his left, to Amit Shah, then president of the ruling Bharatiya Janata Party party. Shah would answer all questions, Modi said.

Shah stepped up, as he has done for Modi for years now. He is the second-most-powerful man in India. Many in the party call him the invisible prime minister. Shah is Modi’s shadow, loyal attack dog, spokesman and campaign strategist. He has now been named home minister, one of the most influential cabinet positions.

Shah, 54, has been a Modi loyalist since the ′90s. They go back to Modi’s early days in Gujarat, when Modi was not content with being general secretary of his party — he wanted power. In 2001, a few years after his arrival, Modi became chief minister of Gujarat with the help of Shah. Shah served as a young minister in Modi’s state cabinet, holding a wide portfolio. Shah’s mission was to thwart all trouble that came Modi’s way, with his office getting the infamous tag of the “dirty tricks department” of the chief minister.

Since that time, Shah has only grown more powerful. He is one of the most divisive and hateful politicians in India. He has told audiences that a vote against the BJP will be celebrated in Pakistan. He has referred to Muslim immigrants as “termites” who need to be thrown in the Bay of Bengal. It was his idea to introduce a bill to grant citizenship to minorities from neighbouring countries, except Muslims.

More troubling, he has a checkered past on human rights. He has been accused of extrajudicial killings against Muslims labelled as being terrorists.

In 2010, I reported on the killings. I produced Shah’s call records and an internal note by the Gujarat state intelligence agency that noted he was in conversation with officials as they took victims to be killed. Two weeks after my investigation was published, Shah was arrested (he denied the accusations and called the charges “fabricated and politically motivated”).

The Central Bureau of Investigation had been investigating Shah for his role in the killing of a Muslim man, Sohrabuddin Sheikh, and his wife, Kauser Bi. The CBI, under the watchful eye of the Supreme Court of India, named Shah a key suspect and conspirator in the crime, but also accused him of being the head of an extortion racket that involved underworld thugs and politicians. The charges were so serious that the Supreme Court banned Shah from entering his home state so he could not influence or intimidate witnesses. Shah was also investigated for his role in the kidnapping and murder of a 19-year-old woman, Ishrat Jahan, who had been illegally detained.

Shah didn’t spend long behind bars — he was soon out on bail. It was speculated that Shah’s downfall would also bring down Modi. But in 2013, Modi was named the BJP’s candidate for prime minister. Shah was made the president of the BJP, the first party leader to hold the position despite the criminal charges against him. As the Modi government came to power, witnesses in Shah’s case turned hostile, judges recused themselves, and within months Shah was acquitted of all criminal charges.

In 2013 Shah was also accused of illegally spying on a young woman. Two journalism organizations produced taped conversations with senior police officials, where he was heard directing them to keep surveillance. The BJP’s explanation was that her father had requested security, but the police couldn’t produce any official requests or authorizations.

Despite his controversial past, Shah has now cemented his role as Modi’s confidant and enforcer. He can take policy decisions without the prime minister’s approval. In 2014, when the opposition Congress Party gave up on its electoral prospects, Shah began preparing for 2019. He relaunched a massive membership drive of BJP workers. In a span of two years, the number of verified BJP members rose from 35 million to 110 million. Shah has also built political alliances across the country, which helped the BJP obtain its recent massive electoral mandate.

Some speculate that Shah has set his eyes on the prime minister’s chair for 2024. For now, as head of the home ministry, the most significant department in the Indian parliamentary system, he will oversee the disposal of justice and be responsible for maintaining peace and harmony in the country.

But he’s clearly all too willing to abuse power. India is living in one of its most polarized political and social moments. The country needs a healing touch. But Modi and Shah only care about amassing power, even if it means weakening institutions, undermining human rights and eroding trust in the rule of law. India could not be in more dangerous hands. DM

This article, first published by Washington Post, is republished here with permission from the writer, Rana Ayyub. an Indian journalist and author of Gujarat Files: Anatomy of a Cover Up.