Ramaphosa’s New Dawn is here — but what it will take to bring the civil service back to life? 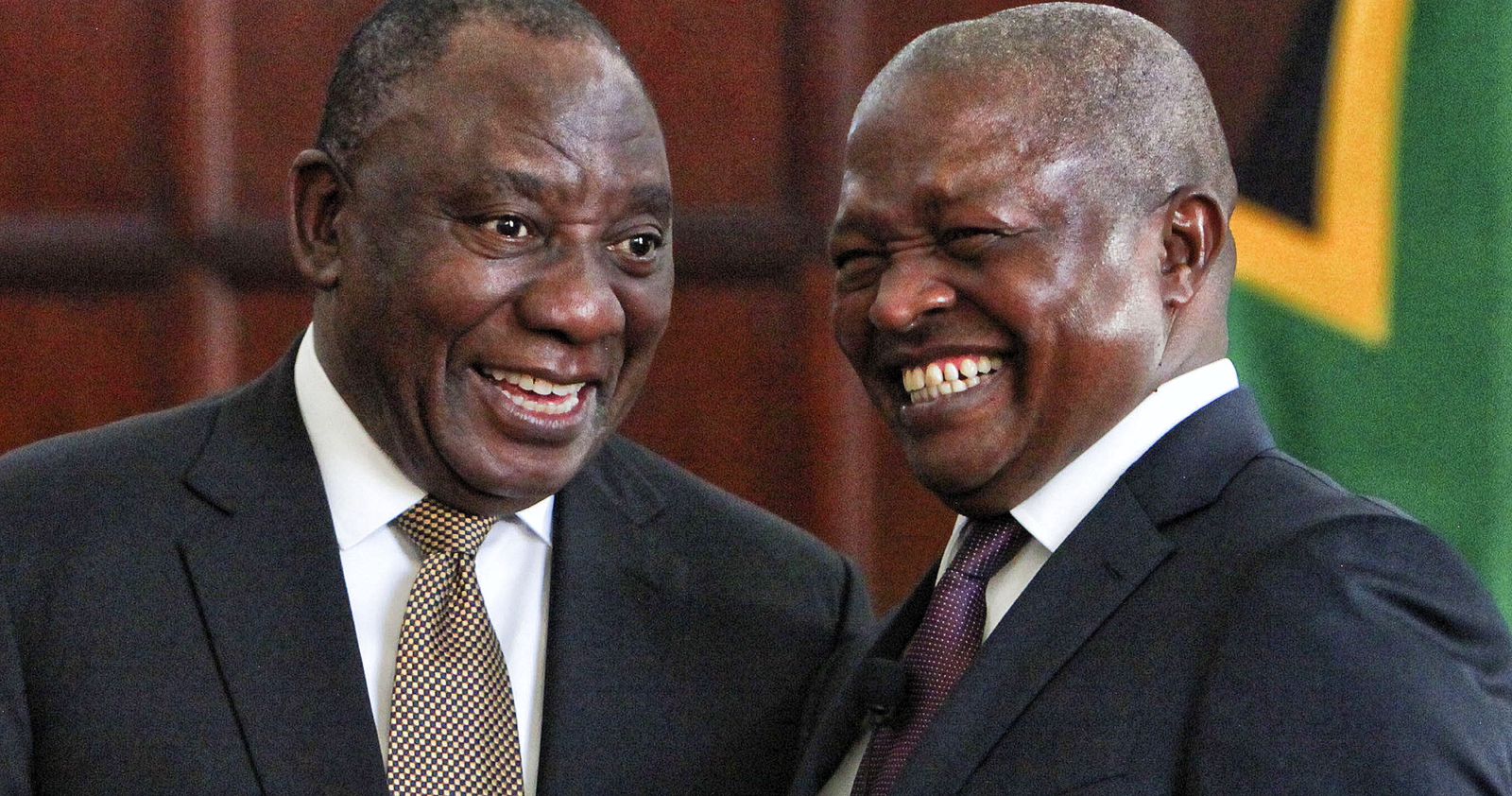 David Mabuza shares a light-hearted moment with President Cyril Ramaphosa after Mabuza was sworn in as a member of parliament Chief Justice Mogoeng Mogoeng, 28 May 2019, at the Presidential Guesthouse in Pretoria. Picture: Alaister Russell/The Sunday Times

A new president, a new Cabinet, but the same old civil service. The compliance culture that has evolved since 1994 has all but killed the developmental state. Deeply fearful of making mistakes in an environment where it is impossible not to make mistakes, officials minimise risk and maximise compliance. If they can just tick the boxes, they will be safe. Result: Zero experimentation and innovation.

President Cyril Ramaphosa became quite nostalgic as the 8 May 2019 election came to a close.

It reminded him, he said, of 1994 — a time of new beginnings, new ways, new focus. In short, his New Dawn. But then, as now, what happens in practice depends to a large extent on the role of the state, and in particular how thousands of officials across all departments and spheres of government think, behave and relate to one another.

Ramaphosa’s team is aware of this and discussions have already begun. And unlike during the Zuma era, these discussions seem to be asking the right questions.

Read as a package, the Constitution defines the South African state as a “developmental state”. What this means is that the state has the primary responsibility for envisioning and implementing strategies to address our development challenges. The cornerstones of the developmental state have been “co-operative governance” between the departments and spheres (not tiers!!) of government, and “participatory governance” with civil society, academia and private sector.

Unfortunately, the compliance culture that has evolved since 1994 has all but killed the developmental state. The compliance culture is simple: Deeply fearful of making mistakes in a regulatory environment where it is impossible not to make mistakes, officials minimise risk and maximise compliance.

Co-operation across departments and participation with society becomes a risk worth avoiding when initiatives are not aligned to mandate. If they can just tick the boxes, they will be safe. Result: Zero experimentation and innovation. And without innovation, navigating complex social problems (such as development) is impossible.

To make matters worse, the response to State Capture since Ramaphosa became president has been increased vigilance, tightening of the screws and more regulations. Protests happen every day, but officials worry more about what the Auditor-General will say, or whether politicians will throw them under the bus, than what the people think of them. Result: Deepening of the compliance culture and therefore, even more, fear and less innovation.

At least during the State Capture years, we had firm evidence that some officials can be innovative: They found ingenious high-risk ways of looting state coffers. Can they now use these skills for good?

We also know of inspiring innovative cross-departmental, inter-governmental, non-corrupt and inclusionary alternatives, especially in the renewable energy space. So, we know officials can do it. The question is, can environments be created that allow officials to take the risk of being innovative for good without the fear of being punished?

President Ramaphosa’s team needs to connect development, innovation, learning and experimentation if the New Dawn is to be the start of a new era.

In a culture of compliance (reinforced now by an anti-Capture climate) officials tend to look inwards and upwards: Inwards at those who can catch them out, and upwards to those who might not like what they do. Instead of stretch targets in their KPIs, they aim for less.

Underlying institutional paralysis is the technocratic image of the state as a service delivery “machine” rather than an enabler of development. A machine is operated by technical specialists. Consultation with and participation by real people and communities is thus viewed as a barrier. Sustaining development through building relationships, which requires “soft” skills, is not seen as adding value as it is difficult to measure.

Instead, the core business is “effective service delivery” via a vast array of so-called “mechanisms” — “stock-taking”, “performance dashboards”, “real-time reporting”, “outputs” and “audits”. In this self-perpetuating autocracy, every meeting is an echo-chamber. And management consultants write the meaningless scripts.

Even if you did want inter-departmental or inter-governmental co-operation, auditors prefer functions that do not overlap and budgets that are not pooled. As a result, officials must deliver on their mandates via their silos and segregated budgets. But to address complex system problems with multiple parts, they need at the very least to blend mandates and collaborate with other departments. And so, ironically, we have a developmental state driven by a nominal service-delivery culture, but where actual implementation is high risk.

Where co-operative governance happens, it is hollowed out. People arrive at coordination meetings to defend departmental mandates and protect budgets, not engage.

Inter-governmental forums tend to be formalistic, non-discursive, non-learning and non-reflective soulless events. In these fora, a particular mode of leadership is replicated: The “higher” you are, the less you are expected to listen and the more you are expected to speak. As a result, leadership is about positions and the gradual accumulation of ignorance as you rise through the ranks.

The alternative to all this starts by getting rid of the notion that “the state” exists. It exists only as an idea, a political project. But in reality, it is a vast ramshackle affair comprising a loosely coupled set of institutional assemblages. The best way to “see” the state is to see relationships and then lead accordingly.

If leadership abuses relationships (by, for example, deploying fear or patriarchal power), performance will drop; if relationships are generative, empathetic and enabling, performance will improve. It is as simple as that (albeit easier for women to grasp than it is for men who have been socialised into cultures of control). But how does it work?

Officials should start with “what is” rather than “what it should be”, that is, state-as-reality rather than state-as-ideal. The key questions then become: What do I have at my disposal to work with? Who should I work with to achieve the goal? What is beyond my direct control that I need to influence?

There are two types of environments that are misunderstood and conflated.

The “top-down” Authorising Environment is of necessity about command-and-control: Regulatory and policy-driven; subject to budgetary and electoral governance cycles; rules-based and upwardly accountable; rigid and compliance-oriented.

The “bottom-up” Mobilising Environment has the potential for safe-to-fail experimentation, complexity, flexibility, learning and institutional agility via partnerships with stakeholders — businesses, social movements, faith institutions and research institutions (although when institutions in this environment fail to connect and communicate, their impact is muted).

In general, the Authorising Environment tries to suppress the Mobilising Environment. The latter then goes into resistance mode, as we have seen in our protests, or takes the government to court; while the former turns inward, hollows out and eventually disconnects from society.

Both environments need each other, but both need to find better ways to connect and communicate with each other.

This mindset is a paradigm shift from “good governance” to “good enough governance”. Officials need to become adaptive managers of complex realities that defy linear thinking, planning and measuring. More importantly, officials need guidance and support as they navigate through adaptive management. This is best illustrated by comparing two strategic management approaches.

The traditional model is a low-risk three-year cycle: Year one, investigate; year two, strategise and plan; and year three, budget and implement.

The alternative is very different: Start something with others now (which contributes immediately to building trust in action); evaluate early (within a month or two which implies unrestricted information flows); learn-by-doing (which is about creating safe-to-fail spaces); incrementally budgeting as the project expands over time (no “big bangery” thinking); and continuously make small adjustments (which is about responsiveness and agility).

If your starting point is “state-as-reality” then the next logical step is to accept that the state cannot do everything. Instead, a “whole-of-society” approach is needed that rebalances the Authorising and Mobilising Environments. This means enabling officials to empower and work with people, communities and businesses to engage and partner. It is all about enabling: Encourage simple protocols rather than complex rules, substitute plain language for public sector acronyms and techno-speak, be a good listener!

In practice, this relational way of thinking leads to the classic South African response: “Let’s bring all the stakeholders together in a consultative workshop.”

To put it bluntly, this does not work any more. Higher-level people arrive at the first meeting, but never again. The energy peters out as attendance drops. Discussions seldom result in action or implementation. No-one is assigned to sustain the activities in between meetings. The end result is a waste of time and money. Dialogue as an end in itself does not work.

The alternative is to establish the terms of engagement in advance, including the goal, who needs to be in the room, capacities, seniority (authorising and technical) level. Trust gets built by negotiating the terms of engagement and then collaborating. The result is fear reduction because participants can say: “If I have got to know someone by working with them, I will be prepared to take risks.” In this way, influence and implementation get expanded beyond the limits of the mandate of each and every single department.

For co-operative governance and participatory governance to regain their place as the foundation stones of the developmental state, it will be necessary to bring adaptive management capacities into the governance processes. Traditionally, the core governance competencies were policymaking, regulation, compliance, administration and monitoring/evaluation.

Adaptive management is a new skill for a time of complexity and transition. Without collaborative leadership, adaptation and learning capabilities, the chances of reviving public service as a life mission will be close to zero. DM

Professor Mark Swilling and Amanda Gcanga are with the Centre for Complex Systems in Transition at Stellenbosch University. Andrew Boraine is CEO of the Western Cape Economic Development Partnership.