The World Cup’s Big Five, with Afghanistan out in lef...

The World Cup’s Big Five, with Afghanistan out in left field 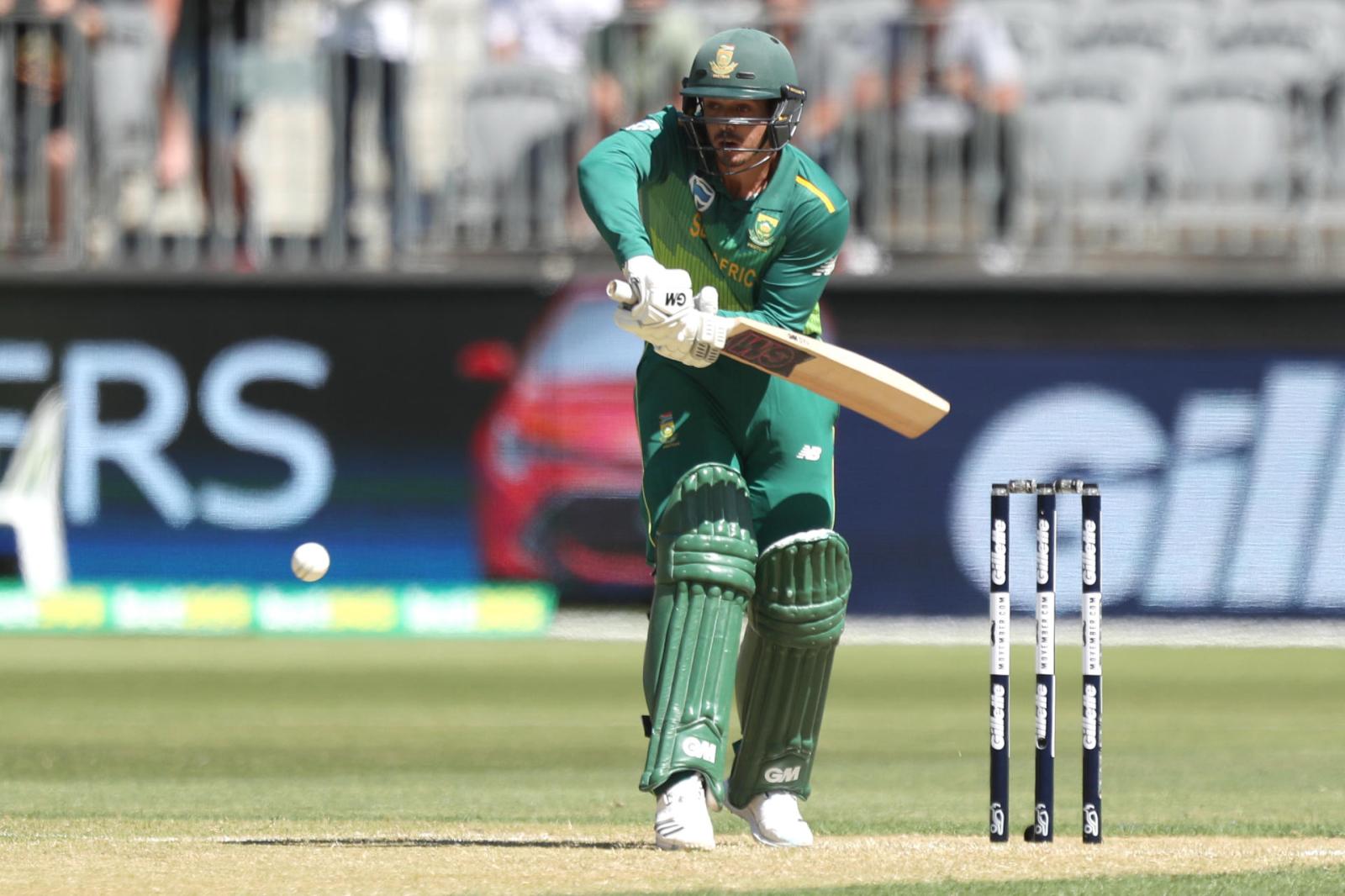 With rule changes favouring a rapid accumulation of runs, cricket fans are waiting with bated breath to see which team will be the first to clock the 500-run mark in an ODI innings. (Photo: EPA-EFE/RICHARD WAINWRIGHT IMAGES)

Over the next two weeks, 10 nations will do battle to lift the most prestigious trophy in cricket. There are many contenders for the big prize. We look into the prospects of the top-five ranked teams, as well as those contenders peering in from the boundary.

The 12th ICC Cricket World Cup is about to start in England and Wales, with the first game taking place on Thursday, 30 May 2019 at The Oval. The tournament will have 10 teams which will go toe to toe in a round-robin format where they will all play one another once, with the top four teams at the end of the cycle going to the semi-finals.

Daily Maverick looks at how some of the teams might perform throughout the tournament, as well some of their key players.

England come into this tournament as the top-ranked team in one-day internationals (ODIs). Add into the recipe that they will be enjoying home ground advantage and it’s easy to understand why many commentators and those in the betting world have tipped the co-hosts to go all the way in this tournament.

Despite making it to the final on three occasions, they’ve never won the World Cup. However, coming into the tournament, they have what is arguably one of the most fluid batting line-ups. They have in their ranks batsmen such as Johnny Bairstow, Jason Roy, Joe Root and Eoin Morgan. And all have been in good form this season.

Spinner Adil Rashid, who has taken the most wickets (129) of any bowler in the period between the 2015 World Cup and the 2019 edition will be vital for the home team. The pace bowling of Chris Woakes and Mark Wood will also be crucial for the home team’s chances of success.

Another major contender in this tournament are India. The two-time champions come to the tournament having lost 3-2 in a home series against Australia. Most of the players were also involved in the Indian Premier League season which concluded recently, less than ideal preparation. Expectations are also very high back home, but India have shown over the years that they are adept at handling the pressure.

Their squad is also quite well balanced. The trio of Rohit Sharma, Shiktar Dhawan and captain, Virat Kohli, is incomparable (they have amassed 42 ODI hundreds between them since the last World Cup).

Then there is an elder statesman and iconic wicketkeeper, Mahendra Singh Dhoni. Throw into the mix number-one ranked ODI bowler Jasprit Bumrah and left-arm spinner Kuldeep Yadav, who showed the damage he can do when the pitch conditions favour him when he took 6-25 in a rare England defeat last summer at Trent Bridge.

Player to watch: Undoubtedly Virat Kohli. He is the number-one ranked ODI batsman in the world, captain of the team and is tipped to be the top-scoring batsman at the end of the tournament. If he finds his stride, India will be very difficult to stop.

Unlike in previous tournaments, South Africa head into this year’s World Cup not as one of the strongest teams, but one that still holds promise.

In the 2015 World Cup, they broke their hoodoo of having not ever won a knockout game at the tournament when they comprehensively beat Sri Lanka in the quarter-finals, only to narrowly lose to co-hosts New Zealand in the semi-finals. In this World Cup, they’ll be hoping to go two steps further and win the tournament for the first time.

They have the firepower across the board and a bold leader in Faf du Plessis to do it. It’s just a matter of whether they can hold their nerve at the business end of the competition.

In the absence of retired AB de Villiers, Quinton de Kock will need to provide the spark. Sage Hashim Amla and captain Du Plessis will need to be at their best to adequately support him. The experience of JP Duminy with both bat and ball will also be key.

In the bowling department, South Africa boast two of the top five ODI bowlers in spinner Imran Tahir and quickie Kagiso Rabada. If the Proteas are to have any hope of going all the way, these two — plus the colossal Dale Steyn — and Lungi Ngidi will have to be in fine nick. Steyn is already set to miss the team’s opening game against England with a shoulder problem.

Player to watch: Quinton de Kock. The left-handed batsman has an incredible ODI record with 14 centuries in 106 innings. He also has a variety of shots and recently displayed them during the Indian Premier League this season with eventual champions Mumbai Indians.

New Zealand come into the tournament with a very solid and well-rounded team. The seam attack, spearheaded by Trent Boult, with the wiles of Tim Southee and blistering pace of Lockie Ferguson in support, holds the key.

In the batting department, they are dependent on the trio of Kane Williamson, elder statesman Ross Taylor and Martin Guptill, All have been in excellent form. Taylor is in the form of his life, averaging 81 since the end of the 2017 Champions Trophy.

Player to watch: Ross Taylor. As mentioned above, Taylor is in great form. Over and above that, he has been consistent for the past few years. Also, he brings with him a wealth of experience; this will be his third World Cup on the trot. Expect Taylor to be right up there challenging for leading run-scorer in the tournament.

Since winning a record-extending fifth ICC World Cup trophy on home soil in 2015, Australia’s star has gradually dimmed. Culminating in the infamous ball-tampering scandal, now known as sandpaper-gate, that rocked them while on tour in South Africa in March 2018. Following the embarrassment emanating from that, they’ve kept their heads down and gone about their business trying to rebuild and move on. This has seen them pick up 13 wins in 14 ODI matches.

The two players suspended during sandpaper-gate, batsmen David Warner and former captain Steve Smith, have been eased back into the fold and have hit the ground running. Warner, in particular, has been in devastating form since his ban ended. He recently top-scored in the IPL, raking in 692 runs from just 12 innings. Furthermore, he has scored 394 runs at an average of 131.33 in Australia’s last five warm-up matches prior to the tournament.

If this duo, along with the likes of Glenn Maxwell, Aaron Finch, Usman Khawaja and Shaun Marsh hit their stride with the willow in hand, the Aussies will be tough to beat.

They also have what is arguably the best opening pair of bowlers in Pat Cummins and Mitchell Starc. The duo is deadly with the new ball and will be bombarding batsmen at breakneck speed throughout the tournament.

Player to watch: Pat Cummins. He has taken 17 ODI wickets in five matches in 2019.

Pakistan have managed just three wins in their last 20 ODIs heading into the World Cup – but that’s generally a poor indicator when it comes to Pakistan before a major tournament. They have continually defied form to spring a surprise, most recently when they went all the way to win the ICC Champions Cup in 2017, coincidentally also held in England.

They have talented players, but have failed to click as a unit in recent times. The batting can be managed with the likes of Babar Zaman, veterans Shoaib Malik and Mohammad Hafeez, as well as Haris Sohail in their ranks.

They are a bit thin in the bowling department, with little support for new wunderkind Shaheen Afridi. The lanky paceman has hit the ground running since making his international debut as an 18-year-old in 2018, picking up 24 wickets in 14 ODIs.

West Indies have the Gayle Force, Chris Gayle, in their ranks. Gayle is one of the most feared batsmen in the game, and has announced that he will retire from ODIs after the World Cup.

With that in mind, he will be looking to go out in style and maybe lead the Windies to their third World Cup success, and their first in 40 years. He will rely on the captain and all-rounder Jason Holder, plus hard-hitting Andre Russell and youngster Shai Hope to help shoulder the run accumulation.

Bowling-wise they have Shannon Gabriel and youngster Oshane Thomas, as well as old head Kemar Roach.

Afghanistan have just about no chance of winning the tournament. However, they might be quite exciting to watch as they slug it out with the big boys, with nothing whatsoever to lose. They might nick a surprise win here and there.

Keep an eye out for leg-break bowler Rashid Khan, who ranks third in the world in ODIs, and keeper/batsman Mohammad Shahzad.

The tournament kicks off on 30 May 2019. The final will be played at the iconic Lords Cricket Ground on 14 July. DM