Show the way: Plea to light up dark streets takes marchers onto roads of southern suburbs 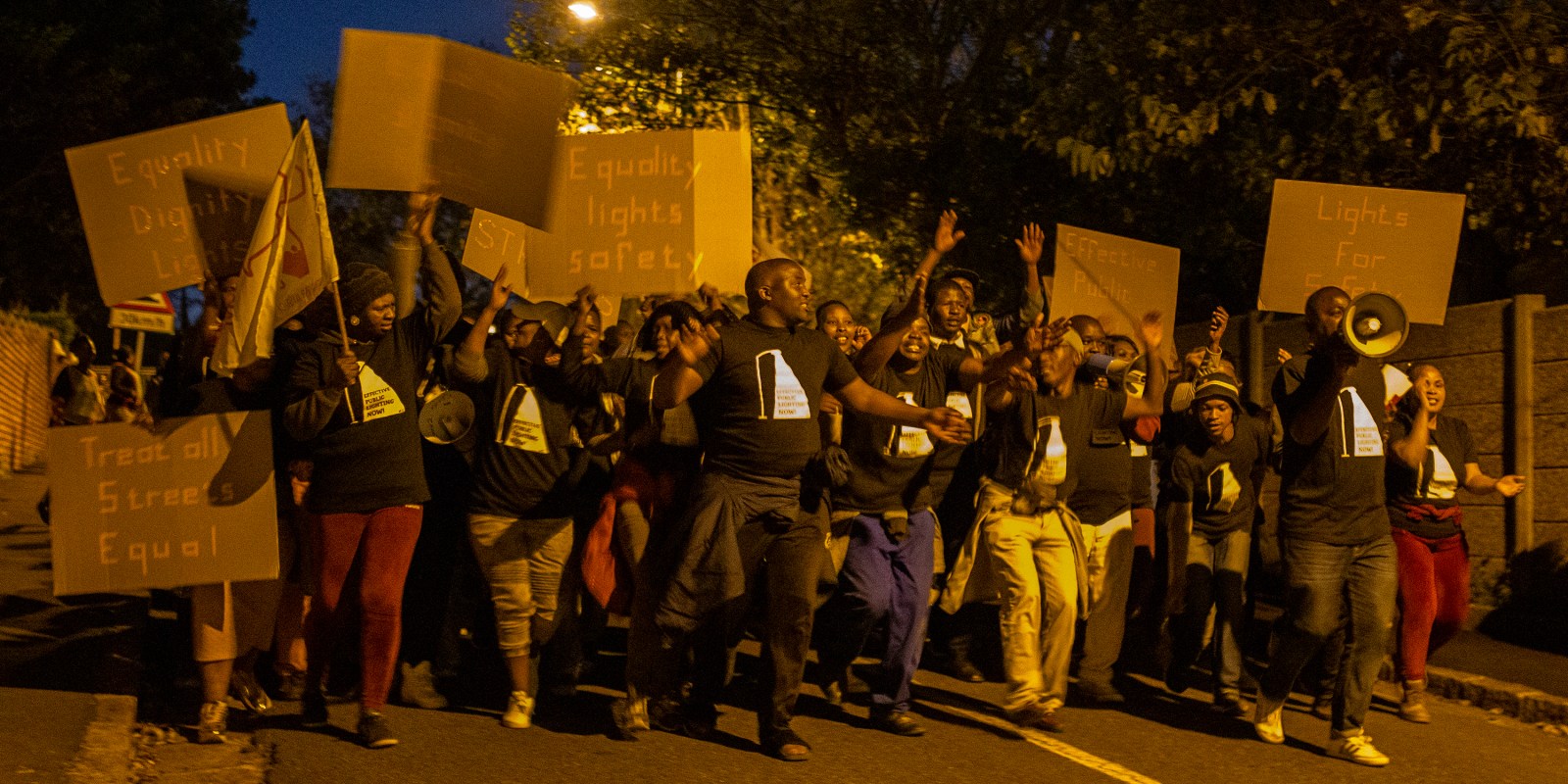 A group of around 150 residents from Khayelitsha, Kraaifontein, and Philippi marched through Rondebosch, Cape Town, to demand better public lighting in their communities on 28 May 2019. Photo: Aisha Abdool Karim

Calls for better public lighting rang through Rondebosch as township residents participated in a Social Justice Coalition night march on Tuesday, 28 May. Around 150 residents from Khayelitsha, Kraaifontein and Philippi gathered in the southern suburb yesterday to protest against the lack of adequate street lights in their own communities.

“People can walk freely here, but where we come from it’s dark,” said Axolile Notywala, Social Justice Coalition (SJC) general secretary, when addressing a crowd at Rondebosch Park on Tuesday, 28 May.

The SJC planned their second night march for the year “in suburban Rondebosch to highlight discriminatory allocation of public lighting”, according to a statement.

The area was chosen to directly contrast against the previous night march in Khayelitsha, which took place in February and showcase how much better public lighting is in suburban areas.

“We could have chosen any other wealthy, predominantly white area,” Notywala told Daily Maverick.

“It was for people that have never been to this side of town as well to see and to feel how it is to walk in a street that is well-lit because many of these people walk in corridors that are pretty much pitch-black where they are at risk.”

A group of around 150 people from Khayelitsha, Kraaifontein, and Philippi arrived, in transport provided by the SJC, at Rondebosch Park to participate in the night march. They began the evening by enjoying the various parts of the playground, with several people queueing up to use the swings, seesaw and slide.

“This area feels different because we don’t have parks in our area,” Nwabisa April, a 20-year-old Khayelitsha resident, told Daily Maverick.

“There is a lot of difference I see in just these two minutes I stay here. Where I stay, if it’s like this time, I won’t see you because it’s very dark but here there is lights everywhere.”

After the light-hearted start to the evening, the group began to march through the streets of Rondebosch, singing and brandishing signs that read: “Treat all Streets Equal” and “Equality, Lights, Safety”.

“We are not safe in our communities so it’s important to have lights for our safety,” Ayanda Ntsukumbini, a 19-year-old Khayelitsha resident, told Daily Maverick.

“I don’t feel safe at all, not even a little bit, because we don’t have lights, we don’t have street lights. How could I feel safe when it’s dark because like anything can happen to me.”

Despite the amount of noise generated by the marchers enthusiastic singing, few Rondebosch residents were curious enough to venture outside and find the source. Aside from two people who came out to watch the march go by, other residents instead opted to close their curtains or switch off their lights as the march progressed through the street.

Three SJC members walked ahead of the group to leave pamphlets, titled “We demand: Equality, Dignity & Effective Public Lighting”, explaining the purpose of the protest in mailboxes of each house passed.

“People that don’t live in townships don’t know about these issues and so it’s to highlight that,” SJC general secretary Axolile Notywala told Daily Maverick.

Cape Town mayor Dan Plato delivered the city’s budget for the 2019/2020 financial year on Wednesday, 29 May. The SJC made a budget submission to the city after a draft version of the budget put forward in March did not allocate money for public lighting in Khayelitsha.

While the city has plans in place to install high-mast lights in Khayelitsha over the next five years, the city’s own design safety guidelines state to “avoid high-mast spotlights that cast dark shadows”.

The guidelines also go on to say: “Good lighting is one of the most effective means of increasing levels of safety and deterring crime, because it increases levels of visibility when it is dark.”

This was supported by a 2014 commission of inquiry into policing in Khayelitsha, which found that there was increased crime in areas without effective public lighting.

In previous correspondence with the SJC, the city has highlighted vandalism as one reason for the lack of investment in street lights for areas like Khayelitsha.

“They blame vandalism, but it’s also not understandable how you can vandalise something that is not there,” Notywala told Daily Maverick.

Notywala also highlighted the discrepancies between resources put into areas like Constantia, where street lights were removed at the request of residents.

“Someone that lives in Constantia is much safer even without street lights because they have a house, they have a home that has a toilet and a tap inside and they probably have cars that they drive,” Notywala told Daily Maverick.

Notywala said this is not the case in informal settlements where things like water and toilets “are not inside people’s homes”.

“They are communal and so people have to walk long distances, so those are areas which should have more and better adequate lighting.”

Councillor Phindile Maxiti, the City’s Mayoral Committee Member for Energy and Climate Change, said the city will either install conventional or high-mast lighting, depending on whichever they feel is more suitable for the area – with  “instances of vandalism, theft and illegal connections” forming part of the consideration.

“The city can engage with the affected community to gauge their preference, however a choice is not always possible.”

He stressed that both types of street lights have advantages and disadvantages, saying: “Assertions that are made that one is superior to the other in every way are not correct”. DM