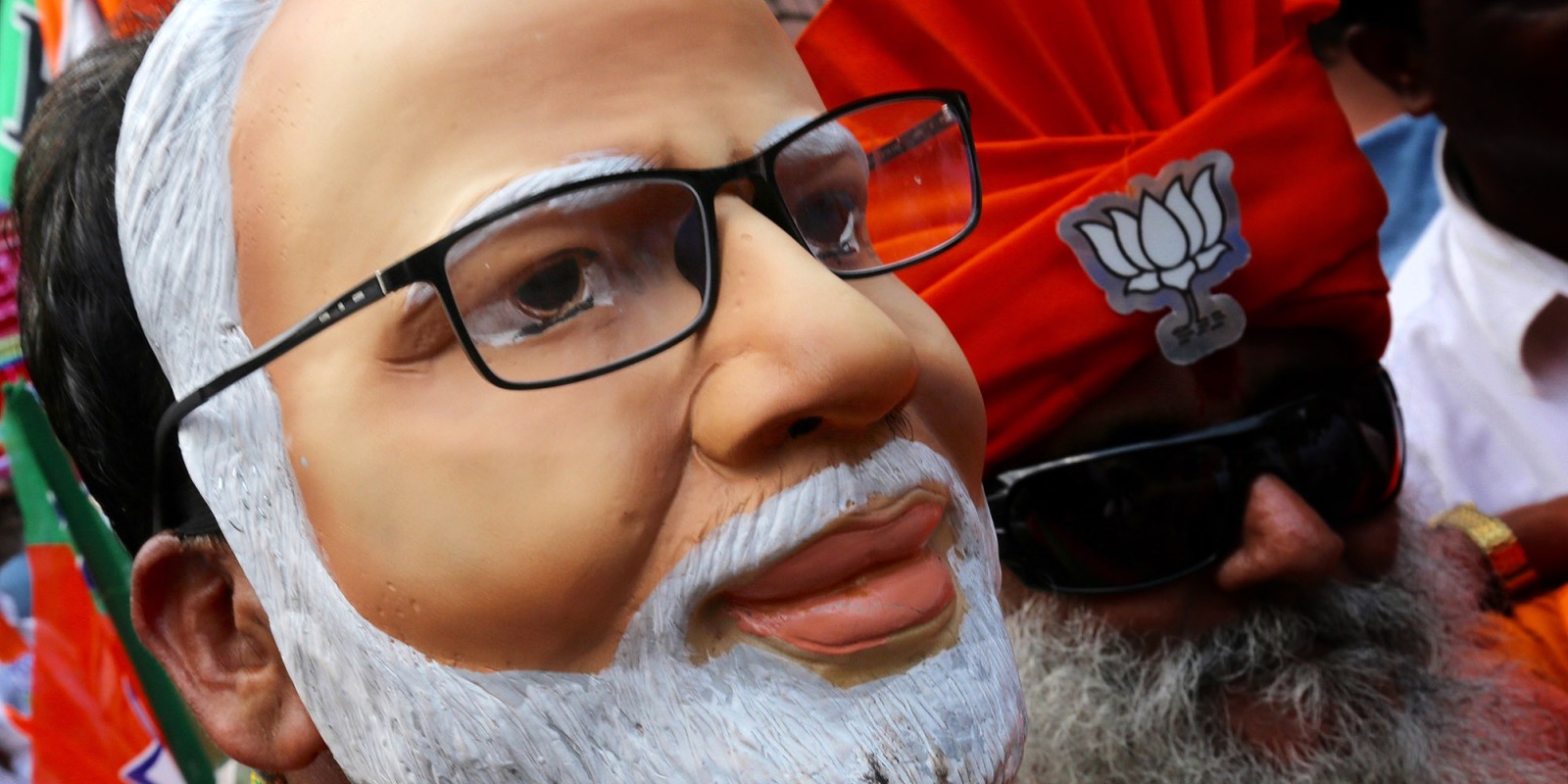 Bharatiya Janata Party (BJP) supporter wear Narendra Modi mask as they celebrate BJP's potential win as votes are counted for the Lok Sabha election in Bangalore, India, 23 May 2019. The Lok Sabha, the lower house of Parliament, elections, which began on 11 April 2019, is having the results tallied on 23 May. The Lok Sabha elections were held for 542 of the 543 lower house seats, and a party or alliance needs 272 seats to form a government. According to initial polling Narendra Modi could retain the position of Prime Minister along with the Bhartya Janta Party (BJP). EPA-EFE/JAGADEESH NV

Prime Minister Narendra Modi has secured a lock hold on the leadership of India, for at least a decade, it seems, after his surprisingly large triumph in the national parliamentary elections which ended last week.

He has fundamentally changed the character of Indian politics, entrenching an extended era of strong religious nationalism, many Indian commentators believe.

This holds some dangers for the unity of the world’s largest democracy.

Modi’s right-wing Hindu-nationalist Bharatiya Janata Party (BJP) trounced the centre-left and secular Indian Congress Party of Mahatma Gandhi which took India to independence in 1947 and governed for 30 straight years after that, and a total of 49.

The BJP by itself won a clear majority, taking 303 seats of the 573 seat Lok Sabha (lower house of Parliament), with the Congress – the ANC’s old ally – trailing a very distant second with just 52.

“After that huge victory, it’s hard to see Modi being unseated in at least the next 10 years,” one close observer, who requested anonymity, told Daily Maverick.

Like most others, he expected Modi and the BJP-led National Democratic Alliance coalition to win again, “but the scale of his victory was a complete surprise”.

In his first victory, in 2014, Modi ran and won to a larger degree on an economic platform. But the economy began slowing before the polls in 2019. And Modi was widely criticised for what was largely perceived to have been a bungled demonetisation campaign, the withdrawal of billions of rupees of notes from circulation, supposedly to counter corruption. Instead, it created cash shortages and general chaos.

And so, in the 2019 campaign, Modi didn’t mention demonetisation and didn’t focus on the economy generally. Instead, he canvassed support on the basis of his personal claim to be India’s “watchman”, his ability to protect the nation – and particularly ordinary Hindus – against external threats.

He was hugely helped in this narrative by his “muscular” response to the killing of at least 40 Indian paramilitary police in a suicide car bombing by Pakistan-based militants in Indian-controlled Kashmir in February. Modi ordered the Indian air force to bomb what it said was a militant training base inside Pakistan.

The military clash with Muslim-majority Pakistan played into Modi’s nationalist narrative as the defender of Hindu-majority India.

“The ‘watchman’ tag was considered tacky when he first raised it,” said one Indian observer. “But it clearly worked for him.”

Modi unashamedly played the Hindu nationalist card and it was this more than anything else which had secured his victory and launched Indian politics into a new era, he added, pointing to the analysis by Vir Sanghvi on the Daily O website, where he called this election “pivotal” in the history of Indian democracy.

Sanghvi wrote that the first phase of Indian democracy was the consensus politics of the old Congress. Then in 1969 Prime Minister Indira Gandhi (daughter of Jawaharlal Nehru who took India to independence) launched a phase of class politics, targeting the rich by nationalising banks, the grain trade and the coal industry, imposing ceilings on salaries, raising tax rates to “absurd” levels and stripping the Maharajas, the princes, of their titles.

Indian politics entered its next big phase in 1990 when caste supplanted class as the major mobilising force. The VP Singh government launched a policy of affirmative action for the lower castes, by reserving 50% of government jobs for them.

Sanghvi said that in retrospect, the next phase of Indian democracy had begun with Modi’s first victory in 2014, and this trend had now been confirmed.

“Just as it had moved from class to caste, India moved now to religion… triumphant Hindu majoritarianism.

“At its base was the suggestion that India had been run, so far, by privileged dynasts who admired Western values – Mr Modi’s India, on the other hand, would use traditional Indian (Hindu) values to assert its place in the world.”

The name of Modi’s party, Bharatiya Janata, is based on the Hindi word for India, Bharat. Daily Maverick’s anonymous observer says there are two Indias, one is “India”, the English-speaking, well-educated, elite minority. The other is “Bharat”, the uneducated (or less educated) Hindi-speaking majority, of about 90%, suffering an inferiority complex and aspiring to a better life.

And Modi even projected himself as a “fakir”, an ascetic, incorruptible holy man – an image he underscored by retiring to a Himalayan cave, complete with saffron robe, to meditate on the eve of the election campaign. This image helped offset the accusations of the opposition that crony capitalism was rife in the ruling party.

All commentators have noted that the BJP ran this election as a presidential campaign, not the parliamentary campaign it technically was. The campaign focused on Modi. And that clearly worked.

Its president is Rahul Gandhi, whose father, grandmother and great-grandfather were all prime ministers of India.

Congress has evidently now exhausted the Nehru-Gandhi card, which has come to be seen as the politics of entitlement. It must now seriously reconsider the role of that family and its policies more generally if it wishes to regain power, Indian analysts believed.

Even economically, Modi scored, notwithstanding the recent dip in some macroeconomic trends, by meeting the needs of poorer Indians, with extensive and practical welfare programmes such as building millions of toilets and sinking wells.

The Congress party’s counter to this was socialist programmes drafted by left-wing French economists, which appealed to intellectuals but not the masses, Indian commentators said.

And to the extent that the opposition tried to capitalise on the disastrous demonetisation policy, Modi and the BJP successfully countered that it was intended to take on the rich and the corrupt.

“Modi can sell a comb to a bald man,” quipped Daily Maverick’s source. “He has no match in political oratory anywhere in the world.”

Modi also probably benefited from the worldwide swing to the right.

Most Indian commentators have expressed concern, though, about the consequences of Modi playing the Hindu nationalist and religious card even more strongly this time. Muslim Indians who number several hundred millions are apprehensive. Will Modi be able to control the more extremist fringes of the BJP without jeopardising his support base, is a question many are asking.

Daily Maverick’s source shares some of these misgivings but does not believe that Modi will go as far as trying to alter the Indian constitution to remove the clause which enshrines India as a secular state, and instead to make Hindu the national religion, as some of his critics fear. That would immediately render religious minorities second-class citizens.

Modi himself has given the assurance that he won’t do that as he regards the constitution as sacred. And the Supreme Court had ruled in 1973 that the secularity of the state is enshrined in the constitution and so is beyond amendment.

One thing Modi could very well change in the constitution, though, is to explicitly assert that the Kashmir territories disputed with Pakistan actually belong to India. This would allow Indians to own land there. Such a move would, of course, be extremely provocative for Pakistan but Modi has shown himself ready and even eager to raise the stakes with India’s arch-foe.

Many had expected that Modi would be lukewarm to foreign policy initiatives embraced by the Congress party such as the BRICS Forum (which comprises also Brazil, Russia, China and South Africa). But Indian diplomats insist he remains fully committed to it, as it provides an opportunity to host and engage with leaders of important countries. DM