Unemployment has increased in the first three months of 2019, according to the Stats SA statistics, but UCT graduates seem to be safe from job-searching hardships. Only 10.71% of graduates are actively seeking jobs, found a recent survey, while nearly a quarter of employed students earn up to R30,000 a month.

A 13 May survey of 4,791 University of Cape Town (UCT) graduates, conducted by UCT’s Centre For Higher Education Development, found that at the time of graduating 44,48% of students were employed. These students were questioned the day before graduating, after spending approximately three months in the labour market.

A further 30.78% of respondents opted to continue studying after graduating, and only 10.71% were still actively seeking employment.

But according to a Stats SA report on unemployment, youth aged 15-24 are the most vulnerable group in the labour market. The youth unemployment rate currently sits at 55.2%, with almost two-thirds of unemployed South Africans falling into the youngest age bracket. Among graduates, the national unemployment rate is 1.7%.

While universities are more accessible to young South Africans — free higher education officially kicked off in 2018 — young people still struggle to get jobs, even straight out of higher education.

According to Pearl Pillay, Managing Director of Youth Lab, a local policy think tank, graduates are more likely to find work than young people without tertiary education, but the work graduates are forced to accept can be exploitative.

“If you’re going to look at employment as a numbers game then sure, having a degree makes you more employable,” Pillay told Daily Maverick. “But a lot of first-time jobs are exploitative, low paying, and people will take it just to get a foot in the door.”

Acting Director of UCT’s Careers Service, Nawaal Boolay, told Daily Maverick that the department is pleased with the number of graduates who choose to continue studying.

Despite many young people struggling to find jobs after university or college, UCT graduates in the healthcare department are most likely to be employed after graduating, with only 7% of graduates seeking employment. 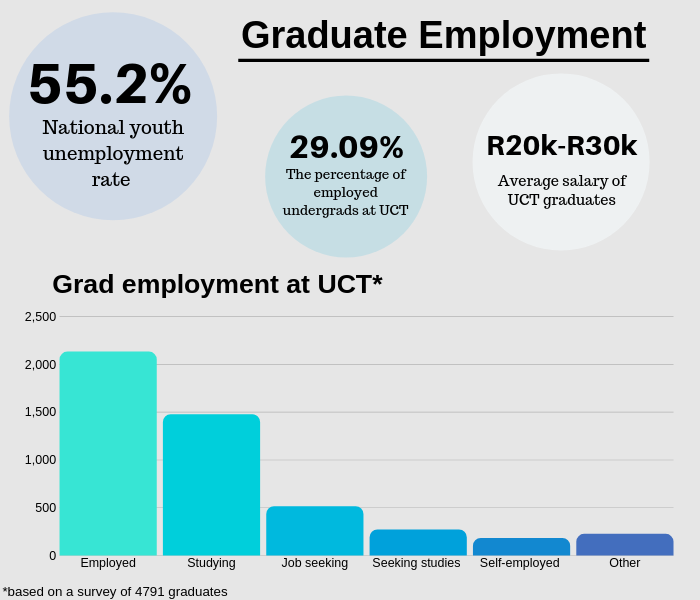 Pillay told Daily Maverick that most graduates in the healthcare faculty will have a job or an internship at the time of graduating, and do not often struggle with unemployment.

“If you look at industries like medicine, law, accounting, that have work stipulations to complete a degree, those graduates are almost guaranteed a job,” said Pillay. “But humanities or science students, their career paths are less rigid. If I’m a BA student, I don’t have work experience as part of my degree.”

Graduates with degrees in Engineering and the Built Environment (EBE) were most likely to have issues finding jobs, with just over 15% of graduates unemployed.

Boolay says she worries about the students who are still unemployed three months after completing their studies.

“We would like to improve the unemployment data,” Boolay said. “It has remained constant over the last three years.”

This may be why nearly a quarter of recent UCT graduates earn between R20,000 and R30,000 per month. According to Pillay, most graduates’ first jobs are not high earning, and companies often exploit graduates who need job experience by offering them unpaid or low paid internships.

Although UCT was recently ranked 108th globally in the 2019 Quacquarelli Symonds (QS) Graduate Employability Rankings, which measure employment three months after students leave university, the university remains the top university in Africa, with the highest graduate employment rate in the continent. DM 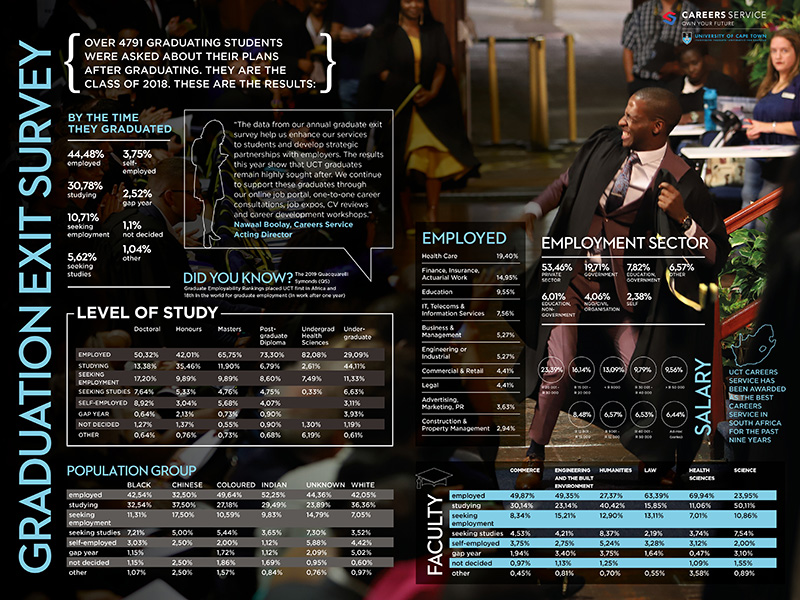