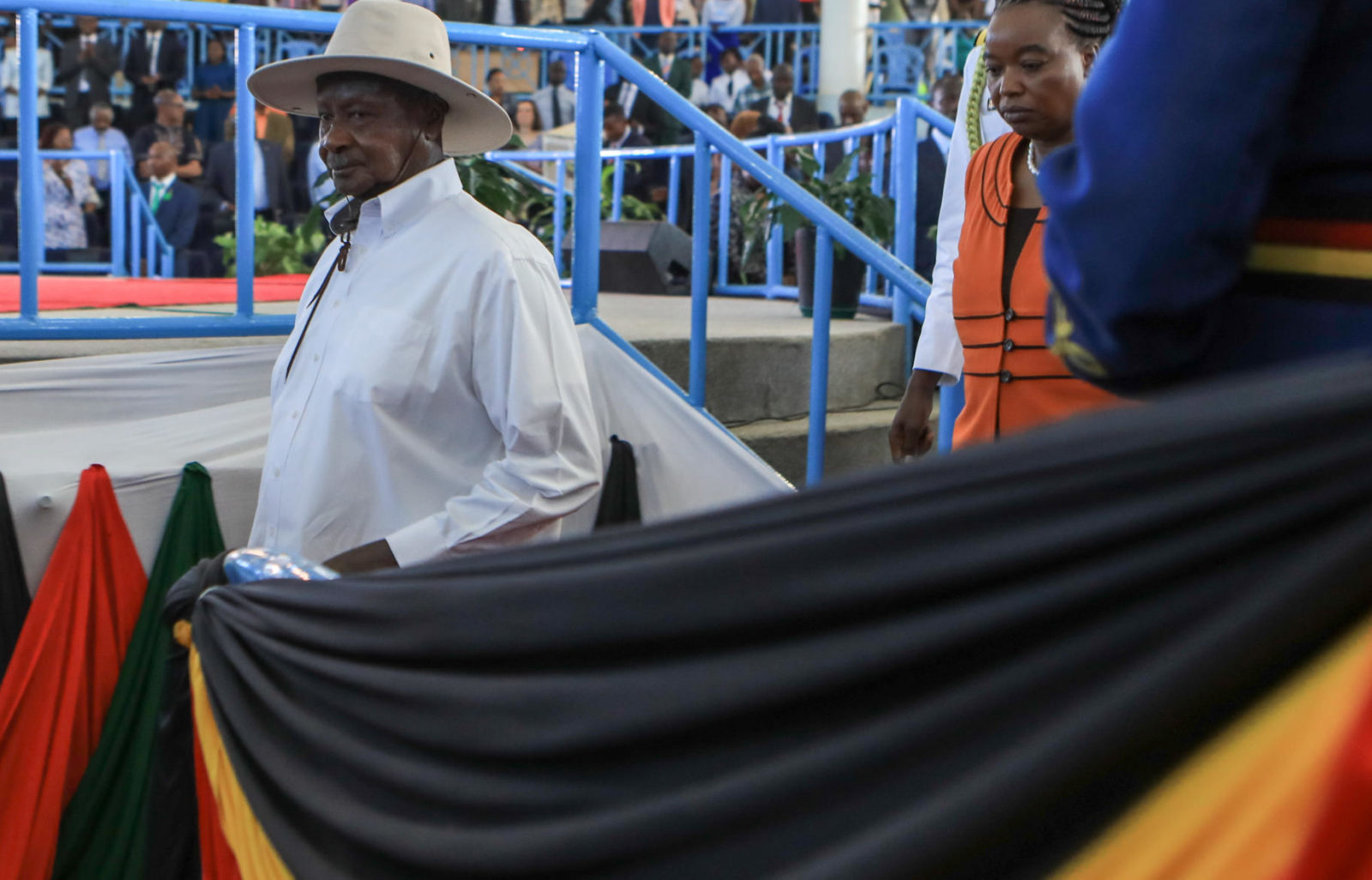 President of Uganda Yoweri Museveni (L), walks out after giving his public lecture on 'Integration in Africa', to students as part of his three-day visit to the country to strengthen bilateral relationships with Kenya at the Kenyatta University in Nairobi, Kenya, 29 March 2019. EPA-EFE/DANIEL IRUNGU

The East African Community could tower above others when it comes to economic growth and trade opportunities. By Duncan E Omondi Gumba

Can the threats to the East African Community (EAC) trade bloc, including accusations of “trade wars” and border closures between Rwanda and Uganda, be turned into strengths through mediation by countries such as Kenya? And will the EAC continue taking a lead in Africa’s transformation into a continental economic bloc?

The EAC is one of eight regional economic communities recognised by the African Union (AU). One of the ominous questions at its Council of Ministers meeting from 6 to 10 May in Arusha, Tanzania, was whether it would again survive the upheavals that brought it crashing down in 1977, at the height of a customs union success.

Will political differences between leaders and feuds between member states halt the momentum achieved since its relaunch in July 2000? Will the new EAC remain possibly Africa’s most successful case for regional integration?

Recent headlines highlighting the tensions between Rwanda and Uganda, and Burundi and Rwanda echo the difficulties that precipitated the collapse of the old EAC. These feuds threaten progress within the bloc of six countries with an estimated population of 195-million.

The ministerial meetings were set to look at how regional integration could be strengthened. These included reviewing plans for a common currency and a political federation. Discussions of these proposals began at the February summit, where President Paul Kagame of Rwanda took over the presidency from his Ugandan counterpart Yoweri Museveni.

The success of such plans will confirm the community’s reputation as the most rapidly integrating regional economic bloc over the past few years. This is perhaps because of the need to make up for lost time after its relaunch and its pursuit of the ultimate goal of political federation.

Since its rebirth in 2000, with three original member states – Kenya, Uganda and Tanzania – the regional bloc has expanded. Burundi and Rwanda became members in 2007, while South Sudan joined in 2016.

The EAC is also “the fastest growing region on the continent with a robust GDP growth forecast of 5.9% from an estimated 5.7% in 2018”, according to the African Development Bank’s 2019 African Economic Outlook.

Following the ratification of the African Continental Free Trade Area (AfCFTA), the trade deal will enter into force on 30 May. The EAC, with its vast experience, could contribute to this ambitious continental project. However, it first has to overcome its current difficulties.

With the disintegration ghost in the EAC’s history threatening to resurface, icy diplomatic ties and accusations of a “trade war” from both Kampala and Kigali precipitated the 27 February closure of the Katuna/Gatuna border post between the two countries. This closure of their busiest crossing point has drawn in Kenya’s mediation, which stands to lose from an escalation in the trade stand-off.

Rwanda closed the border post to stop its nationals crossing into Uganda, allegedly to protect them from what officials termed “illegal arrest, torture, harassment and deportation by Ugandan authorities”. For its part, Uganda accused Rwanda of espionage and infiltration of its security agencies.

Two months later, as the countries sought to end the impasse through diplomatic channels, tensions seemed to ease as Rwanda allowed Gatuna residents to cross the border. Other Rwandans, however, were still prevented from crossing at Gatuna.

Kenya’s ability to mediate is key to preventing an EAC break-up. It will determine whether the current threats of disintegration and internal conflict are transformed into strengths that can take the regional bloc forward.

The country’s hand has been strengthened by its February re-election to the AU’s Peace and Security Council. Its diplomatic status will likely receive a further boost as it lobbies for a non-permanent seat at the UN Security Council for the 2021-22 term. This raises hopes of Kenya successfully weighing in to help resolve the crises in Burundi and South Sudan.

The consequences of an EAC collapse would be felt across the region and beyond. This is a time of economic slowdown in China, a protracted Brexit, trade wars between the US and other major world powers, and cautious optimism about sub-Saharan African economies. Turning the current upheaval into a positive could deliver a stronger region that towers above others in terms of economic growth and trade opportunities.

The EAC should build on Ethiopia’s current optimism and enthusiasm – the result of reforms by Prime Minister Abiy Ahmed – to further regional trade by negotiating economic alliances beyond the EAC. This would produce an alternative economic bloc or regional realignment that considers geo-political realities. It would also build on East Africa’s rapid economic growth and potential to spearhead continental integration. DM

This article was first published by the ISS Peace and Security Council Report.