No room in the class for Kraaifontein schoolchildren

No room in the class for Kraaifontein schoolchildren 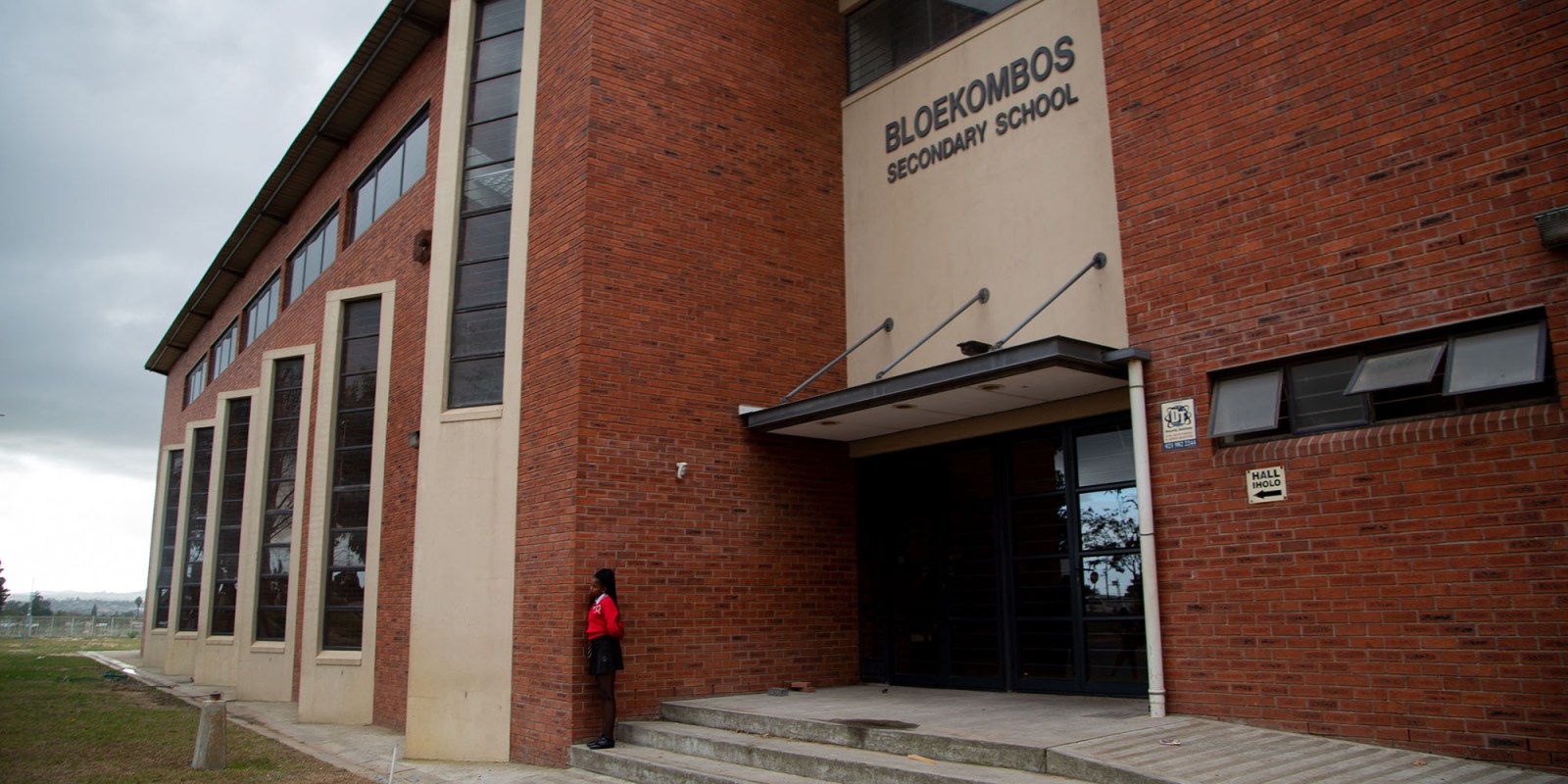 Learners at Bloekombos Secondary School in Kraaifontein, Western Cape, protested against large class sizes and a lack of space at the school on May 16 2019. Photo: Aisha Abdool Karim

High schools in Kraaifontein are demanding more space as they try to deal with a growing population and a large intake of new pupils. Bloekombos Secondary School enrolled almost 1,000 children above its capacity in 2019, leaving many without a desk or space in classrooms. Pupils and parents protested against the overcrowding and demanded the Department of Education add more buildings in the area.

The protest action began on Wednesday, 15 May, with pupils and parents demanding that a new school be built in the area to help alleviate the burden on Bloekombos Secondary School. The four-day action was suspended on Monday, 20 May after talks with the Department of Education.

At the centre of the issue was Bloekombos Secondary School, which can accommodate 1,200 students, but at the beginning of 2019 had enrolled more than 2,000. This meant that several teachers have between 70 and 80 pupils in their classes, with many not equipped with enough desks or chairs.

“Whenever they (pupils) have to change in between periods, every time if a bigger class comes they have to go out and get chairs from the other classes or move around hallways with chairs and desks,” Bloekombos school governing body secretary Buhlebekhaya Buso told Daily Maverick.

“The issue is not only at Bloekombos, but Bloekombos is just a tip of an iceberg,” Buso said.

“We’re looking (at) about eight primary schools feeding four high schools, which is more than the capacity.”

The limited number of schools in Kraaifontein has led to a longstanding issue of over-enrollment. Bloekombos has a history of being over-capacity since it officially opened in 2013.

The Department of Education had asked the former principal of Bloekombos that the school serve “as a hub school for learners that do not have accommodation”, said Buhlebekhaya Buso, school governing body secretary.

The school has been overcrowded from its inception, said Buso.

In addition to these mobile spaces, Bloekombos is using speciality classrooms such as the physics lab and music room for pupils, which means these spaces cannot be used for the practicals for which they were designed. Despite the extra classrooms being used, space remains an issue, with some children having classes outside and in hallways.

Pupils at Bloekombos Secondary were expected to begin their exams on Monday 20 May, but were unable to do so. Exams at the school are now scheduled to begin on Monday 27 May in order to give children and teachers time to prepare.

One concern going into the exam period was that there would not be enough space for all pupils to sit in designated rooms and ensure that everyone would have a desk. The school has since decided to redesign the exam timetable, allowing for exams to be taken in two sessions — one in the morning and one in the afternoon.

“It was made very clear to the school management last year (2018) not to increase admissions into the school,” said Education MEC Debbie Schäfer’s spokesperson, Jessica Shelver.

“The growth in numbers exceeded an additional 400 learners, despite warnings not to do so.”

Shelver said the land next to Bloekombos had been earmarked for the development of a primary school, given that the newly built high school in the neighbouring area, Scottsdene, was under-used.

The construction of the new Scottsdene Secondary School was raised by the Bloekombos school governing body. Buso said: “The building of that school was never communicated with the community of Bloekombos so parents refused to take their kids to that school.”

This was partially due to the extra travel costs that would be incurred by sending learners to a school in a different area. The school also offers only Grade 8 and is “being used by Afrikaans-speaking learners only”, according to Buso.

“I wanted to go to another school, but I moved from Gauteng where I was doing Zulu, and here there are no schools with Zulu,” a Grade 10 learner at Bloekombos Secondary, who asked to remain anonymous, told Daily Maverick.

“Here they do Xhosa, which is close to Zulu, so I can manage because I do not know Afrikaans, so this was the only school I could go to.”

Despite the fact that the Western Cape has continuously seen growth in the number of pupils — more than 113,000 had moved to the province since 2014, according to Shelver — the Western Cape Department of Education did not respond to questions from Daily Maverick about steps being taken to prevent the issue of over-enrolment at schools.

Instead, Shelver cited budget and resource constraints, saying: “We cannot keep up with the demand that is being placed on this province.”

“We are aware of the accommodation demands, but we do not have the funds, or the manpower, to do it at the rate that some people demand in certain areas. We plan in advance, but new areas of growth do occur, as learners and parents shift around the provinces and within the province,” Shelver told Daily Maverick.

At present, there are still an additional 450 pupils unplaced, the majority of whom are in the growing Metropole North district, the district Bloekombos Secondary School formerly fell under. DM