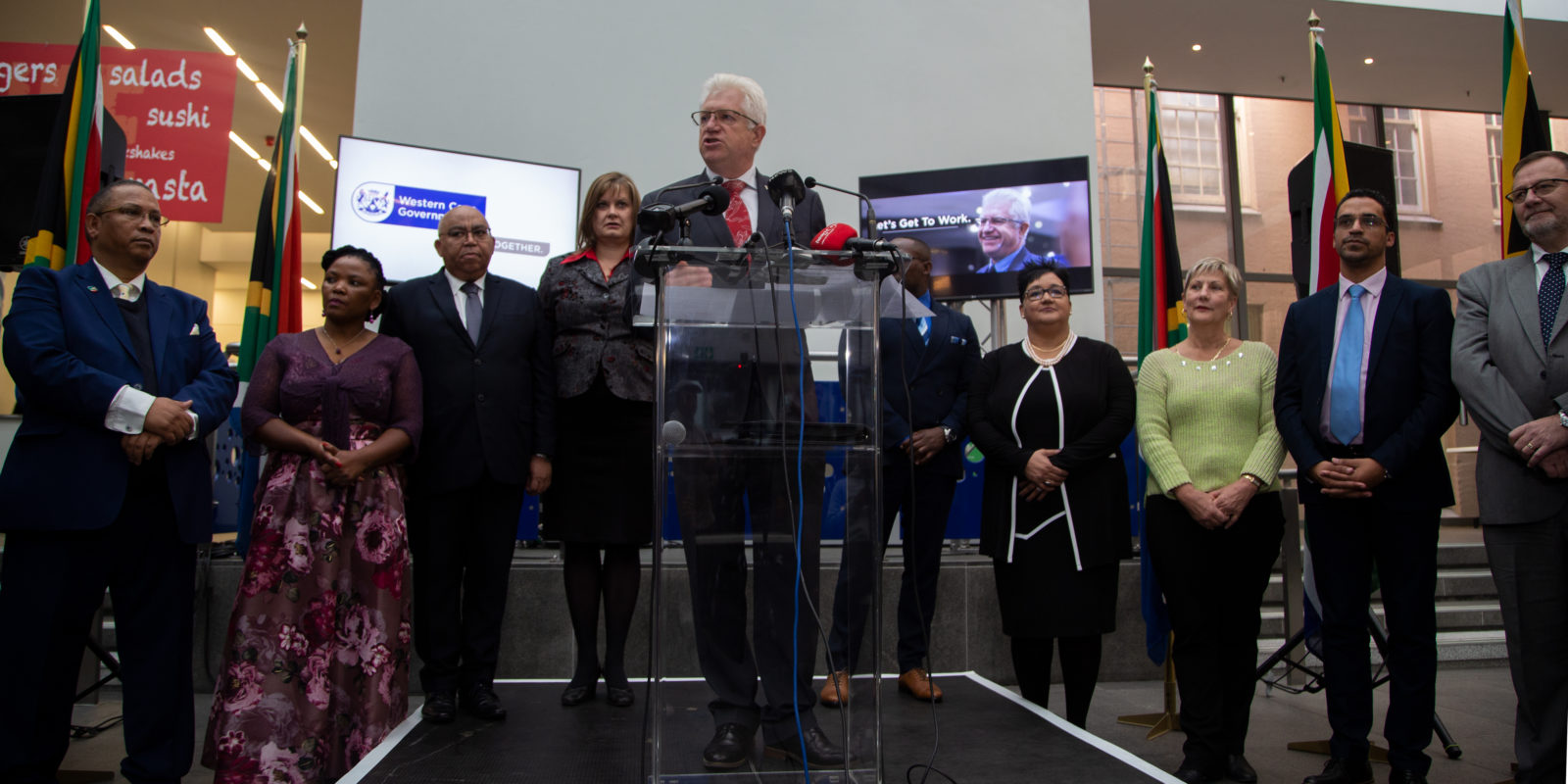 New Western Cape Premier Alan Winde hit the ground running after he announced his new Cabinet on Thursday morning to journalists and members of the Western Cape government.

“The work begins now,” said the new premier as he introduced his 13-member provincial cabinet, one day after assuming office as the Premier of the Western Cape.

Read in Daily Maverick: Winde officially becomes premier — but not without ANC drama.

The new Cabinet was sworn into office by Western Cape Judge President John Hlophe on Thursday.

Cabinet members under the premiership of Helen Zille, such as Nomafrench Mbombo (MEC for Health), Debbie Schäfer (MEC for Education) and Anton Bredell (MEC for Local Government, Environmental Affairs and Development Planning) and Anroux Marais (Cultural Affairs and Sport) retain their positions.

Speaker of the fifth provincial legislature, Sharna Fernandez, is now MEC for Social Development — a position she takes over from Albert Fritz.

Fritz now becomes MEC for Community Safety — a position he held between 2010 and 2011. The former Social Development MEC spoke to Daily Maverick about his plans for his five-year term.

“First of all, let me say I’m really honoured — nobody wanted to take this portfolio — I said let me take it”

Fritz said there are four points that need to be looked at, “including — the fact that I come from Social Development — I understand the causes of poverty, what happens to young people who don’t have any hope”.

Fritz said he would look at the issue of CCTV cameras across the province — “not only in Constantia”, safety in rural areas and foster greater relationships between him and neighbourhood watches and community policing forums.

Another MEC who changed portfolios is DA Western Cape leader Bonginkosi Madikizela — who moves from Human Settlements to Transport and Public Works.

Madikizela comes into a portfolio where the DA — particularly on the campaign trail — punted rail to become a provincial mandate.

Coupled with not only the issues involving rail, but the sporadic flare-ups of taxi violence, Madikizela is responsible for Public Works, which involves issues of using provincially owned pockets of land for social housing for working-class coloured and black communities.

Madikizela had previously come into conflict with housing activist groups such as Reclaim The City for their stance that provincially owned land should be used as affordable housing. In one instance, Madikizela labelled Reclaim The City’s tactics as “lawlessness and thuggery” after activists went to speak to Cape Town’s deputy mayor Ian Neilson at 6am at his home.

“I know what’s happening in this department and have some ideas on how to handle some challenges,” said the MEC.

“This department must play a crucial role in bridging that social gap,” said Madikizela, who added that he would work closer with other spheres of government to deliver on what he said were “challenges”.

“We’ve got to look at our property portfolio in the areas that you’ve mentioned, including inner-city development. I mean, that is the work that I have previously started in my other portfolio.”

Madikizela’s successor in the Human Settlements portfolio is Tertius Simmers, one of three newcomers to the provincial cabinet.

Simmers, a skills development facilitator by profession, makes his first appearance in the Western Cape cabinet after a stint in the provincial legislature.

“I’ve seen the way Human Settlements changes lives, and ultimately it is a need that we will never be able to catch up on as government,” said the new MEC.

Simmers picked out the challenges of his department, such as the accuracy of the housing waiting list, how to transform government land for housing delivery, the backyarder situation in the province and how to use innovation within the human settlements space.

Simmers remained tight-lipped on plans for his portfolio. He did say that he would raise issues of state-owned land to be used for housing in inner-city areas, backyarders and farm evictees who required housing — a matter that he discovered on the campaign trail.

Additionally, at Thursday’s briefing, Winde said his ministers would need to provide regular reports on their portfolios and would have to undergo lifestyle audits now — and in five years’ time. DM