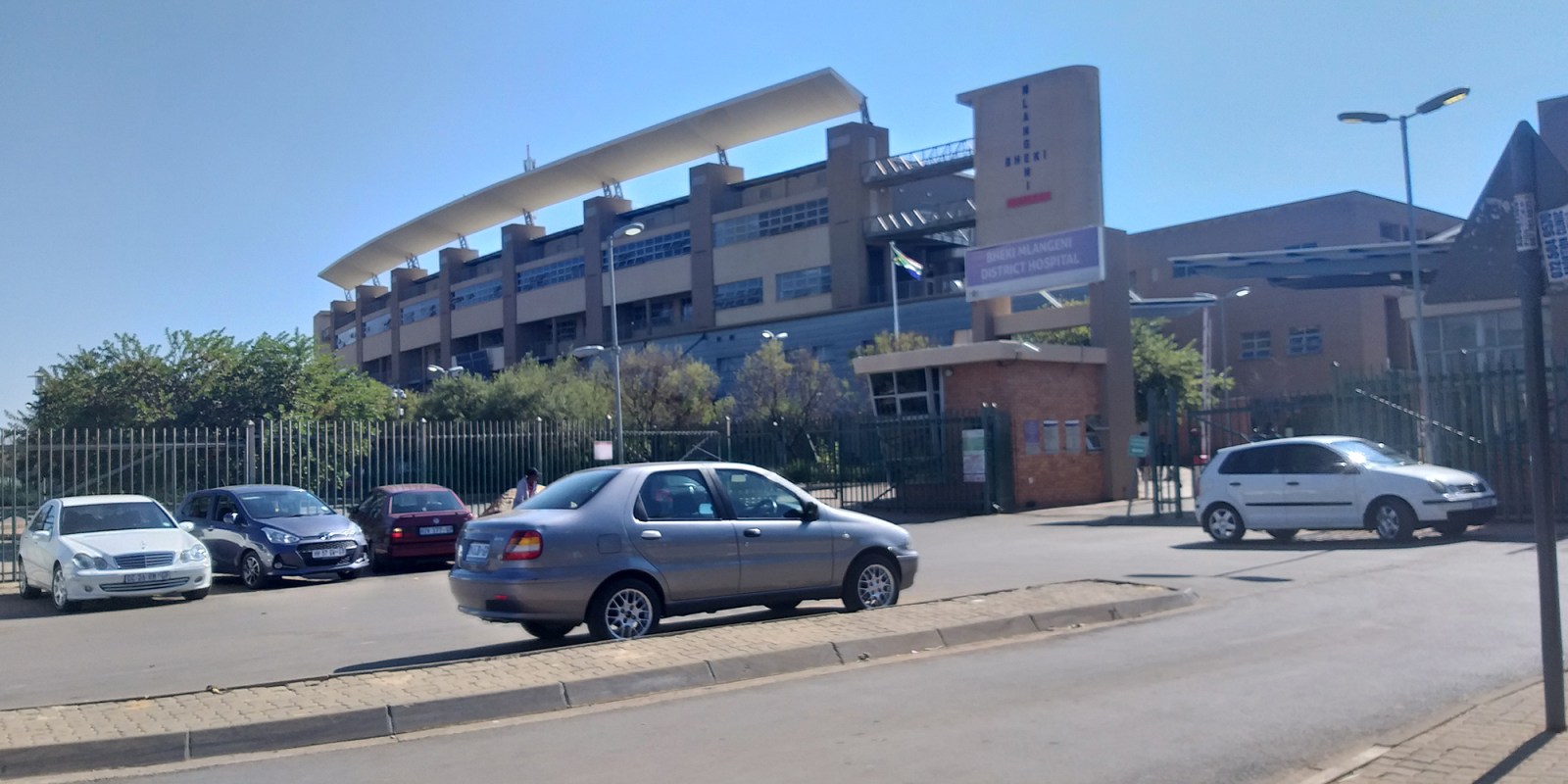 The Bheki Mlangeni District Hospital stands empty. Operations at the hospital have been suspended after a fire broke out in the human resources building. Photo: Bheki Simelane

Patients, staff and the community of Jabulani say they were shocked, but not totally surprised, that a fire had broken out on Monday at the human resources building of the Bheki Mlangeni District Hospital in Soweto.

Patients at the Bheki Mlangeni District Hospital in Soweto said they witnessed a commotion as management struggled to move people to safety when a fire broke out there on Monday.

A total of 86 patients were transferred to other health centres in Gauteng. The Lenasia South Clinic received the most patients, with 30 requiring medical attention.

Eight patients were taken to the Rahima Moosa Mother and Child Hospital for gynaecological attention and 13 were transferred to the Sterkfontein Hospital. It was not immediately clear how many patients, if any, were transferred to other health centres.

“Bheki Mlangeni hospital is currently on divert and we would like to appeal to the health users to utilise surrounding healthcare facilities till further notice,” the hospital said in a statement on Monday.

“I was more terrified by the commotion that ensued afterwards. I thought the hospital management could have handled that better. It was mad and it was terrifying,” said Sibusiso Ndebele, 28, from Rockville in Soweto.

“I had never felt so unsafe. It was all too fast and scary. There was the siren that went off first, then it was commotion as those who were too ill were taken away. I was in my ward when the siren went off and when I tried to look outside, I could see that people were scurrying about, terrified. I was so scared, more so because I cannot walk or run.”

Ndebele told Daily Maverick that after the siren went off, hospital staff came to his ward and told patients to stay calm. He said they were told that they would be moved to a safe place at the hospital.

“They kept telling us different things, but eventually they moved us to a safer place inside the hospital,” said Ndebele.

When Daily Maverick arrived at the hospital on Monday, patients were lying on stretchers at car parks, waiting to be transported to other health centres.

During Daily Maverick’s visit on Tuesday, a senior nurse who asked to remain anonymous confirmed that the hospital was non-operational. All her colleagues had been sent to other health centres, with the patients.

“All that we are doing now is phoning the next of kin of all the patients to alert them to their relatives’ whereabouts. There are no health services being provided here today,” she said.

The senior nurse said staff felt unsafe. She said a hospital should be “like a sanctuary, there should be no questions regarding its safety”.

Staff had panicked when the fire broke out, especially because they were not sure of management’s competence in dealing with a disaster.

“We were scared and panicking, but waited for word from management on what to do next,” said the senior nurse.

Samson Noko, a vendor in the area, said:

“It was a very painful thing to see. They must now get to the bottom of what caused the fire because this should never happen in a hospital again. The government should support the Bheki Mlangeni hospital, there seems to be a lot more challenges every time.”

People who arrived at the hospital on Tuesday morning were turned away and told to seek medical care at other health facilities. Many opted for the nearby Zola Gateway Clinic, putting it under strain. On Tuesday morning there was a long queue of patients which extended outside the clinic.

He said investigations into the cause of the fire had begun.

Lerato Lipholo, 33, a former patient from Moletsane, who was accompanied by her mother to the hospital and was turned away because it was not operational, said:

“I’m not surprised that the fire broke out here. This hospital has attracted controversy ever since it opened. Corruption rules in this hospital, but not everyone is corrupt. It all just boils down to management.”

Lipholo said she came face to face with the challenges at the hospital when she came to deliver her baby a few months ago. She said staff kept complaining about personnel shortages.

“Government rushed into opening the hospital. They were not ready. There are far too many problems at this hospital. If they are short-staffed, why not hire the many nursing graduates who are sitting at home looking for work? It’s poor management,” Lipholo senior said.

“I don’t feel safe. We ask ourselves how a hospital would burn when it is full of people, most of whom, if not all, are sick and cannot move on their own. The government opened the hospital, yet they were not ready. There is never calm,” added Lipholo.

Various scandals have plagued the hospital. On 5 November 2018, the Democratic Alliance held a picket in protest against cash for jobs and sex for jobs scandals.

A total of 111 cases were opened between January 2016 and August 2018, including employees “charged for selling of jobs, irregular appointments (meaning that the procedure and policy were not adhered to during the recruitment process), nepotism, performance of remunerative work outside public service without prior authorisation, gross negligence and putting the employer into disrepute,” said hospital communications officer Mosasane.

The hospital has also been accused of poor management of the psychiatric department, which had caused harm to some mental patients and staff.

In June 2018, it emerged in the Gauteng Legislature that seven mental health patients had been injured and four staff members assaulted at the hospital as a result of inadequate facilities.

Gauteng Health MEC Gwen Ramokgopa had said that the hospital did not have a dedicated psychiatric ward, and had admitted 2,428 mental health patients from March 2017 to March 2018, who had been placed in ordinary wards.

Daily Maverick could not immediately establish if the hospital now had a dedicated psychiatric ward.

Attempts for additional comment about allegations that the hospital had been opened in haste and suffered from staff shortages were unsuccessful at the time of publication. DM