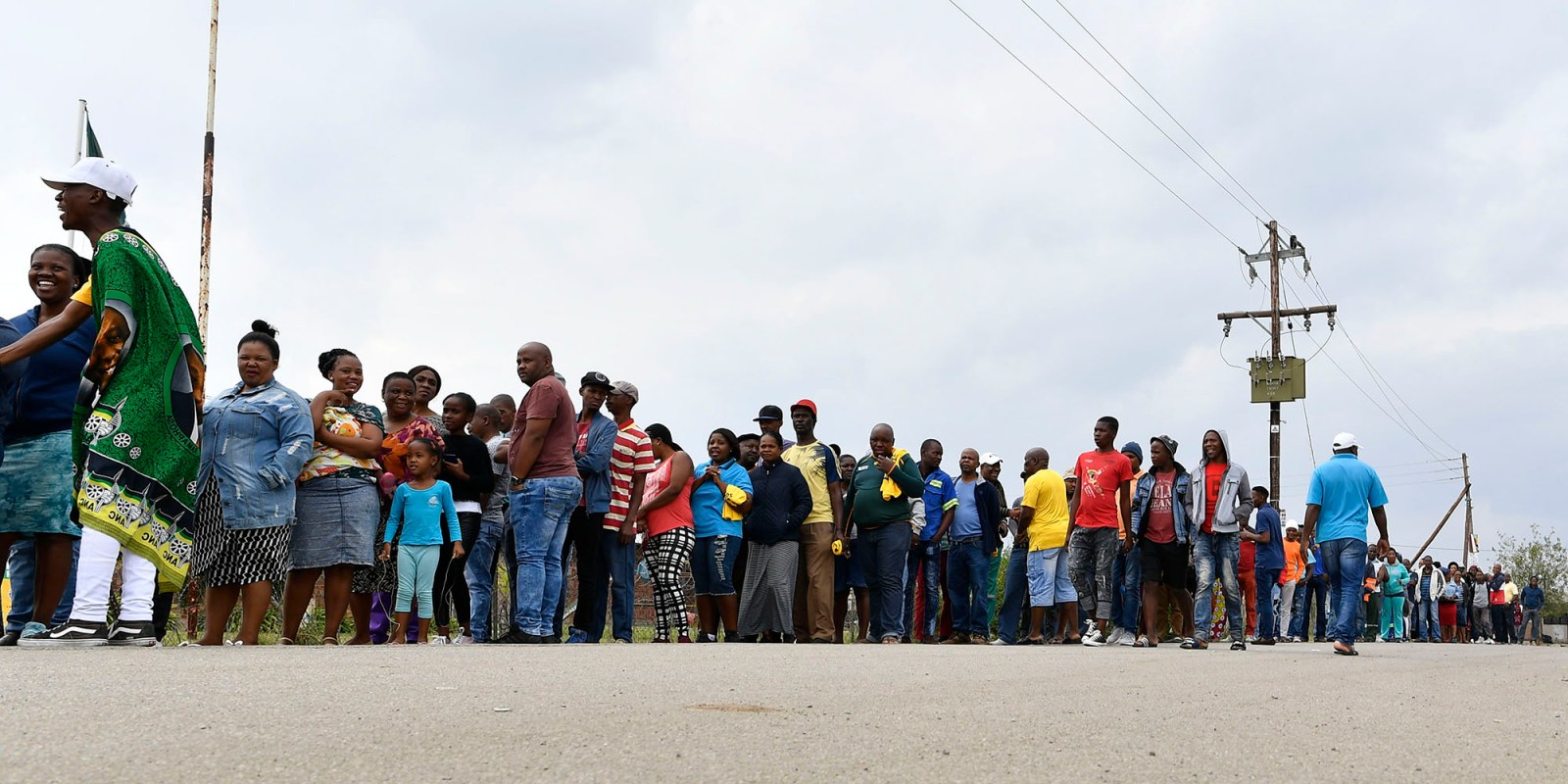 People at a voting station at Marikana Primary School during the 2019 general elections on May 08, 2019 in Marikana, South Africa. (Photo by Gallo Images/Lefty Shivambu)

The legal standards for conduct expected of public representatives and office bearers are inappropriately low.

The ANC led by President Cyril Ramaphosa has won a sound, if not resounding victory in the general elections of 8 May.

Despite Ace Magashule’s attempt to credit the ANC “collective” for the victory (which is not entirely inaccurate), several opinion polls before the election strongly indicated that Ramaphosa’s popularity comfortably exceeded that of the party. The party will be the largest in Parliament because of CR’s promises of a New Dawn where corruption is dealt with effectively, thereby contributing to an environment in which the economy can grow and create jobs.

Data produced by the HSRC’s South African Social Attitudes Survey (SASAS) has shown that, for the past several years, two of the top three issues that most concern voters are unemployment (and associated poverty and inequality) and corruption. The other is crime. These are the considerations that in all likelihood contributed strongly to the ANC’s electoral victory.

The Electoral Commission (IEC) last week handed over to Chief Justice Mogoeng Mogoeng the list of candidates eligible to be sworn in as members of the legislatures. They have met the criteria prescribed in s.47 of the Constitution – that is, they are citizens who are qualified to vote; they are not unrehabilitated insolvents; they have not been declared by a court to be of unsound mind; and they have not been convicted of an offence and sentenced to more than 12 months imprisonment without the option of a fine.

Within days, the Chief Justice will ask new MPs in the national legislature to take the oath/solemn affirmation of office prescribed in Schedule 2 of the Constitution. Other judges appointed by him will do the same in the nine provincial legislatures. The prescribed text includes the promise that they “will obey, respect and uphold the Constitution and all other law of the Republic”. The same promise is required also of Cabinet ministers, and the President and Deputy President.

After President Ramaphosa appoints his new cabinet, the Chief Justice will ask them to take the oath/solemn affirmation also prescribed in Schedule 2. The stipulated text requires the inductees to “…undertake to hold my office as Minister/Deputy Minister with honour and dignity”. (Emphasis added.)

Remarkably, this is a higher ethical standard than is required of even the President and Deputy President, who, however, are also required to promise to “do justice to all”. Perhaps this is the result of each minister’s constitutional duty to “be a true and faithful counsellor” to the President and Cabinet.

Notably, the ANC’s own constitution contains similarly high ethical standards, including the following provisions regarding misconduct:

25.17  The following conduct by a member, officer bearer or public representative shall constitute misconduct in respect of which disciplinary proceedings may be invoked and instituted against him or her: …

25.17.4  Engaging in any unethical or immoral conduct which detracts from the character, values and integrity of the ANC, as may be determined by the Integrity Commission, which brings or could bring or has the potential to bring or as a consequence thereof brings the ANC into disrepute. (Emphasis added.)

On the basis of these standards, there were efforts before the elections by ANC stalwarts to appeal to the consciences of “tainted” electoral candidates to “seriously introspect” and “voluntarily step down” in the interests of the party. ANC stalwarts and members of the Ahmed Kathrada Foundation board Cheryl Carolus and Barbara Hogan observed that President Ramaphosa couldn’t be expected to clean up corruption alone – he needed support, including from those who would lead the new government and those in Parliament who would be required to exercise oversight of the executive.

ANC veterans’ league president Snuki Zikalala is reported to have said that a Gauteng conference in March declared that people who were implicated in wrongdoing should step aside from the lists. “Those who are tainted and implicated should not stand for nominations and should not be part and parcel of those who are on this list – and should sincerely introspect and step down,” he said.

The Ahmed Kathrada Foundation issued a statement supporting the call by the Council for the Advancement of the South African Constitution (CASAC) and Corruption Watch urging political parties to review their candidate lists:

“The two organisations have stated that the ‘legal grounds for formally objecting to the inclusion of particular candidates on the Parliamentary lists are extremely and inappropriately narrow, thus affording little opportunity for successful legal challenge to the inclusion of candidates, some of whom have been found to have lied under oath, others of whom are the subject of strong prima facie allegations of corruption, allegations made under oath, while still others have had persuasive allegations of racism and sexism levelled against them’.” (Emphasis added.)

“Respect for Parliament is heavily dependent on the integrity and standing of its membership to execute its constitutional mandate to ‘represent the people and to ensure government by the people’. This can only be done by MPs who are fully committed to upholding the law and the Constitution.”

All of these appeals fell on deaf ears.

Given the narrow legal grounds referred to, these calls did lead to the involvement of the ANC’s Integrity Commission, which was called on by the party’s NEC to review the list of electoral candidates submitted by the ANC to the IEC. In mid-April, the Chair of the Integrity Commission, George Mashamba, said, having submitted the Commission’s report to the NEC, “They [the NEC] said we must review the list and we have done that.”

As we know, the NEC failed to take any action in response to the Integrity Commission’s recommendations – the party’s lists remained unchanged. In addition, the IEC found that the conduct complained of by members of the public did not meet the constitutional and legal criteria for exclusion described earlier.

Against this background, Chief Justice Mogoeng, shortly after receiving the lists from the IEC, was characteristically forthright:

“Nobody who does not have the capacity to do the job should ever be given the responsibility to do that job. Nobody whose integrity is questionable must ever be allowed to occupy a position of responsibility,” said Mogoeng.

“I can only hope that none of those to whom oaths will be administered will see that exercise as just one of those inconvenient processes [they] have to go through, itching to occupy an office,” he said.

Despite the Chief Justice’s laudable sentiments, the reality is that there are several returning MPs and MPLs whose integrity is not only in question but has been found wanting by a court of law and other authoritative forums. The legal standards for conduct expected of public representatives and office bearers are indeed inappropriately low.

If the ANC is the type of organisation it claims to be, and if President Rampahosa’s new government is serious about its promises to effectively combat corruption and enable economic growth to create jobs, they cannot but respect and adhere to the ruling party’s own ethical standards. These two bodies should not stop there, however, but should then align legal standards for public representatives with their own laudable principles. Now is the time for more “honour and dignity” in our public life. DM