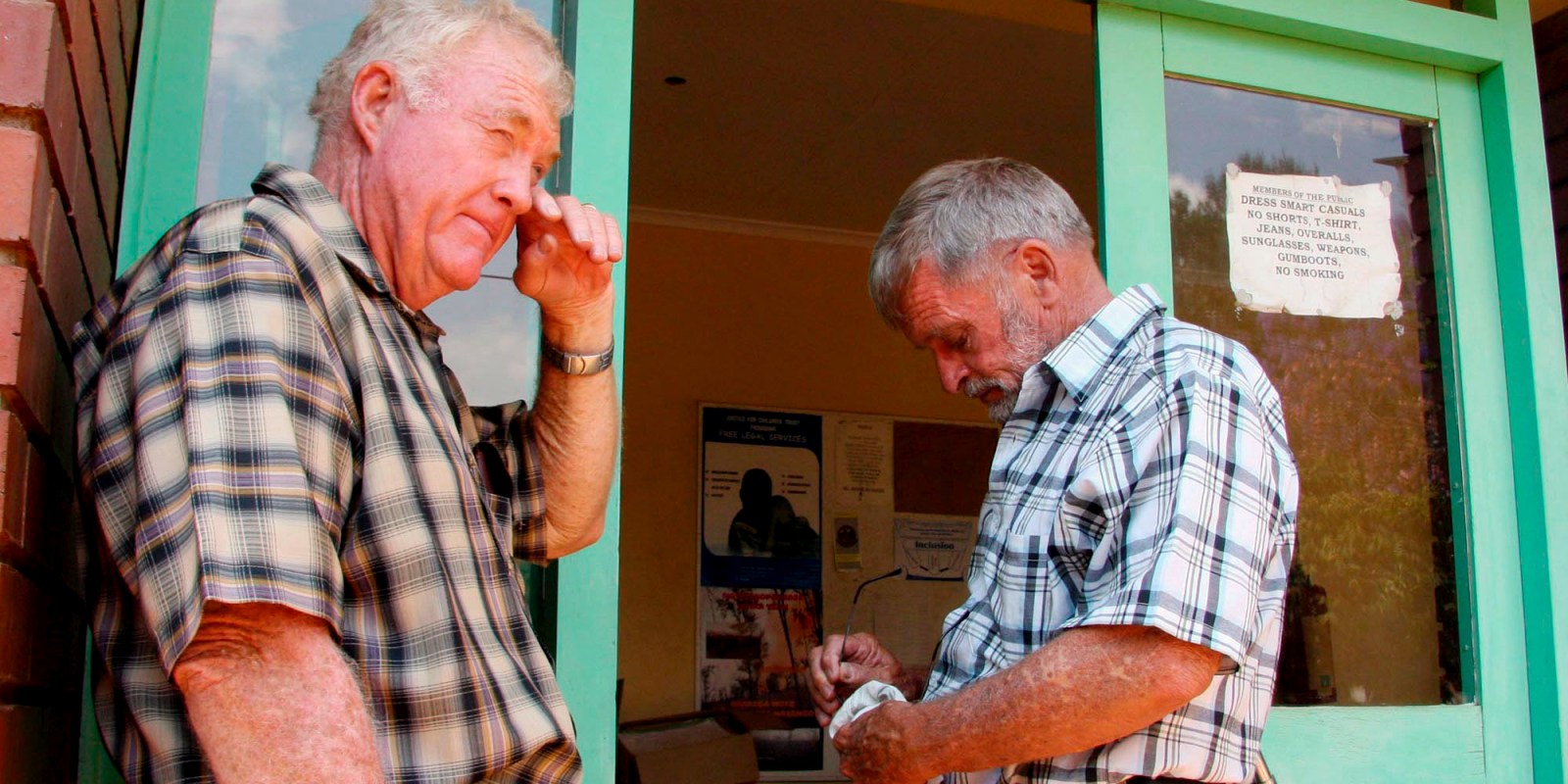 The dispute rages on about the after-effects of the Mugabe government-sanctioned practice 19 years ago of expropriating commercial farmland without compensation. Meanwhile, compensation on improvements made on the land before expropriation is being considered and plans to award interim advance payments have been agreed upon by government and the Commercial Farmers Union (CFU) and Compensation Steering Committee representing former farm owners.

The Zimbabwean government has agreed to pay an Interim Relief of RTGS $55,000 for each farmer who lost land during the rapid reform Programme at the turn of the millennium.

According to Ben Gilpin, the director of the Commercial Farmers Union (CFU), the government has promised to pay by the end of May to mitigate circumstances of former commercial white farmers left in dire straits. This is an interim plan while a proper, comprehensive compensation package is worked out.

“The money was initially denominated in the 2019 national budget at US$53-million but since the floating of the dollar we will get paid in RTGS dollars, which diminishes the amount in real terms,” says Gilpin.

In a statement on the implementation of compensation of former farm owners issued in April 2019, the Minister of Lands, Agriculture, Water, Climate Change and Rural Resettlement said: “Government allocated RTGS$53-million in the 2019 National Budget for interim advance payment, and these payments will be made to former farm owners affected by the land reform programme and who are in financial distress.”

More than 800 applications are being processed by the commercial farmers’ body and under 600 have been passed on to the government. Further, former commercial farmers have forwarded their bank details through CFU to facilitate payment.

The commercial farmers’ body told Daily Maverick that ever since the Fast Track Land Reform Programme (the land redistribution exercise) was introduced around 2000 by the government, more than 3,300 commercial farmers (largely white farmers) lost their land. Of those, around 600 have since died.

However, the “new administration” gave hope to former commercial farmers that the land dilemma can be dealt with, after former president Robert Mugabe was ousted through military intervention in November 2017.

“The issue of land compensation to former commercial farmers is a hot topic because of the commitments made by the government, certainly since President Emmerson Mnangagwa was inaugurated firstly in 2017 and subsequently last year as he made it one of the key issues that he wants dealt with,” Gilpin said.

A senior researcher at the Research Advocacy Unit, Tony Reeler, told Daily Maverick that government compensation would assist a few elderly ex-farmers, but the real problems needed to be fixed – land title deeds and adequate compensation.

“The government nationalised land and hence eliminated property rights without compensation. This is not a good basis for encouraging investment as the government owes a fortune in legitimate compensation to foreign farmers,” says Reeler.

However, Gilpin said that the move has given hope to most former commercial farmers.

“Farmers were happy that the issue that has been on the cards for a long time is finally dealt with, this is a gesture of goodwill,” said Gilpin.

The government of Zimbabwe sparked controversy in early 2000 when it embarked on the controversial Fast Track Land Reform Programme, whereby it acquired commercial land without paying compensation.

Farms previously owned mainly by white commercial farmers were taken away and redistributed to indigenous people in what was seen as a political gimmick by Mugabe to regain his grip on power.

This, according to government, was to redress past colonial injustices and land inequalities that saw the majority of the black community not owning land and living in congested and arid communal areas.

Adrian Mpofu, a smallholder farmer who received benefits from the Fast Track Land Reform Programme, said it was great to have land but they faced multiple challenges.

Mpofu, whose farm is situated in Umguza district in Matabeleland North and who produces small grains, says she lacks adequate agricultural inputs and finances to enable her to properly utilise the land. She added that this has been exacerbated by the impact of climate change.

“The good part of it was that we felt the sense of ownership as Zimbabweans on the land that was ours,” says Mpofu.

Paul Zakariya, executive director of the Zimbabwe Farmers Union, says more than 500,000 households were resettled on small farms (average size 30 hectares) and more than 5,000 farmers got settled on medium to large commercial farms.

In 1930, white settlers introduced the Land Apportionment Act, which became the first piece of law enacted to institute land segregation.

CPI stated that it was during this colonial period that the half of the country’s land was designated for whites, who made up only 5% of the population. Whites were assigned the better land and the act also made provisions for evicting indigenous farmers to drier and less fertile land.

However, in 1980 when Zimbabwe became independent of Britain, efforts were made to distribute land under the willing buyer, willing seller principle and the former colonial power, Britain, was to pay for land to be acquired.

“The land issue is an emotive issue because it was not dealt with definitively and after independence, hence it came back to haunt us. The fact that there was a breakdown in terms of the bilateral assistance from Britain and other countries, triggered the discontent,” reasoned Gilpin.

Gilpin said there have always been various pieces of legislation regarding land.

The constitution clearly spells out, in Section 8, the obligation of the former colonial power to pay compensation for land that has been acquired for resettlement. Section 72 (3) states that where agricultural land is acquired, no compensation is payable in respect to its acquisition except for improvements effected beforehand.

Gilpin explained that farmers – mostly white commercial farmers who lost their land – are to be paid for the improvements made on the farms, such as buildings, roads, dams, fences, electricity, and land clearing.

“The land compensation excludes immovable property or assets such as vehicles or livestock, among others,” Gilpin said.

In its statement, the lands and agriculture ministry, said that “the government of Zimbabwe under the new dispensation is committed to finalise compensation to all former farm owners who were affected by the Land Reform Programme as this is being done in accordance with the country’s constitution and the country’s obligation under the Bilateral Investment Promotion and Protection Agreement (BIPPA)”.

While the land issue remains unresolved, Gilpin said that there has been progress in the last year towards compensation through consented dialogue with the government.

The CFU head further highlighted the need to move forward but called for the government to implement reforms and put policies in place that ensure economic recovery.

“It’s great that government is prepared to consider compensation but it’s also important that government enacts policy that will drive recovery as to be able to service not only this commitment but commitments that will grow the economy. We need to have good farmers to utilise the land for the country’s economy,” Gilpin advised.

Zakariya concurred, stating that other countries could draw lessons from the Zimbabwean experience.

“We have learnt that a …. land reform programme, must be well thought out. Plans to vet and equip beneficiaries must be put in place long before land is allocated,” says Zakariya.

Zakariya added that plans to finance infrastructure development and production must be in place so that production was not interrupted.

Zimbabwe was known for its thriving agriculture on the continent, but after the land reform programme, the sector went to its knees, resulting in the country struggling to feed its populace.

Mpofu said other countries should learn that not everyone is a natural farmer and people needed to be screened to ensure land is effectively utilised and that the country won’t go hungry. DM