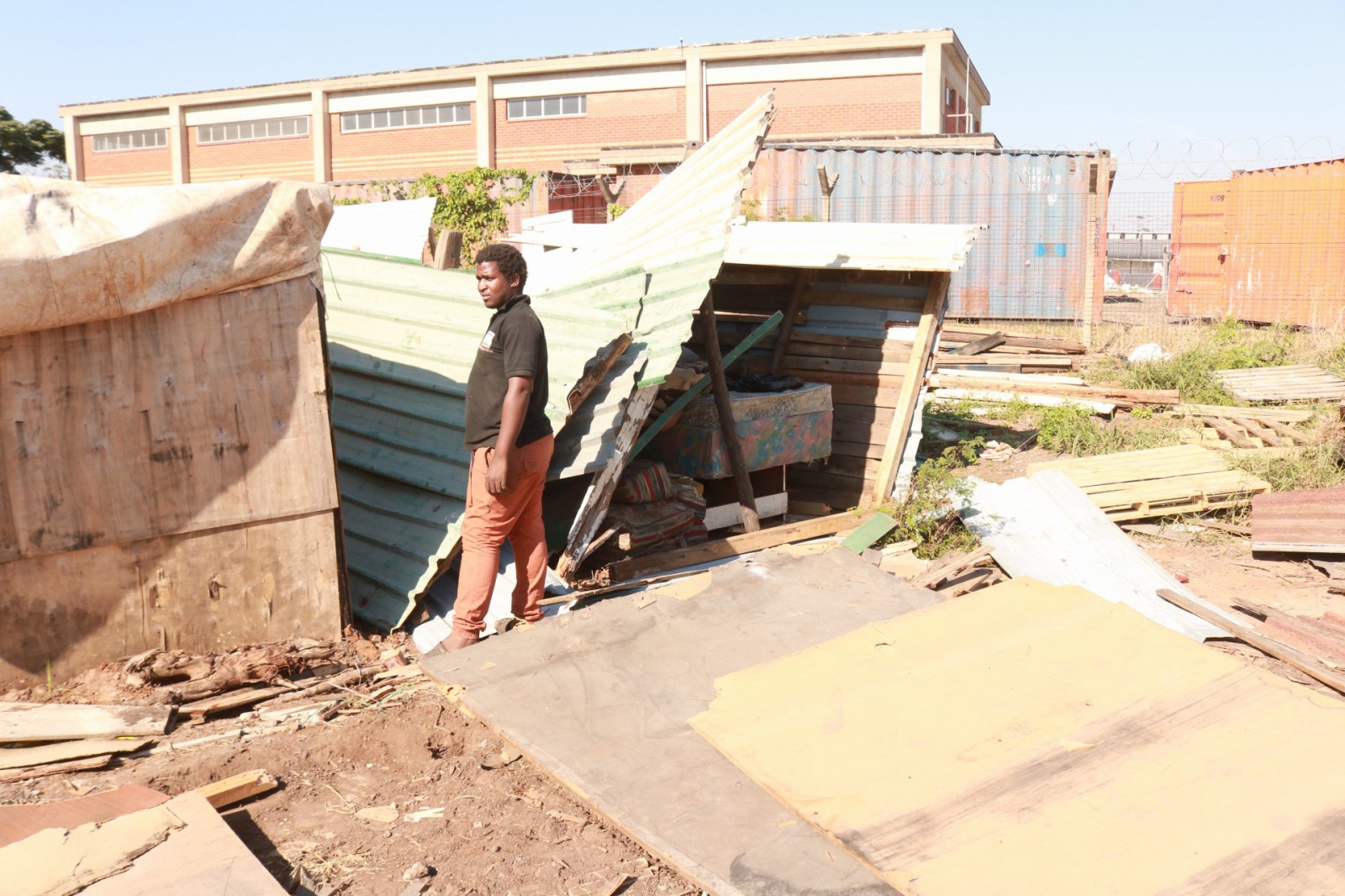 Zamokwakhe Hlongwa stands next to what remains of his shack. Photo: Musa Binda

Dozens left homeless after shacks demolished on Sunday. By Musa Binda for GROUNDUP.

Forty-five people were left without homes when the eThekwini Municipality’s anti-land invasion unit demolished 24 shacks in Daytona River Village informal settlement in Lamontville, in the south of Durban on Sunday.

Zamokwakhe Hlongwa has lived in the informal settlement for the past four years. He said he lost almost everything during the demolition.

He said he was less worried about finding shelter than where he would get money to buy food for his two small children for the next 10 or so days. He only gets paid on the last day of the month.

“They mixed all my food during their heartless demolition. I found rice mixed with maize meal and flour. I had to throw it away because it was messed up,” said Hlongwa.

He said he was home when the demolition took place. But everything happened so quickly.

“My fiancé was bathing when they stormed the informal settlement, she had to grab a towel and cover her body and run out of the shack. As a result, all our belongings were left inside the shack,” said Hlongwa. This is why his goods and food were damaged.

He added that his children were not going to school because their uniforms had been torn.

Lunga Mgwaba has lived in the informal settlement for eight years. He said he was not home when the demolition took place. He had gone to deliver the products he sells to a nearby township.

He said he got a call from one of the shack dwellers telling him to stop what he was doing wherever he was and rush back to the informal settlement because the demolition had started.

“I was so lucky that they did not start near my shack. I called my brother who lives a few kilometres away and we packed my belongings in a van and drove off. Even though my shack was demolished and the material [it was made out of] was destroyed, my belongings were saved,” said Mgwaba.

The settlement was established in 2002 and the first demolition took place on 7 May 2019, a day before the general election. Residents claimed they were not given any court order, and they could not understand why the demolition was taking place only now.

Mqapheli Bonono, the provincial chairperson of housing movement Abahlali BaseMjondolo, said: “As usual there was no court order for this eviction and it was, therefore, an illegal and criminal act by the municipality.”

Bonono suspects the demolition took place because some residents recently joined Abahlali. “We suspect that the gangster administration, eThekwini Municipality, was angered by the shack dwellers’ decision to join our movement,” he said.

The municipality has not responded to questions sent on Monday. DM