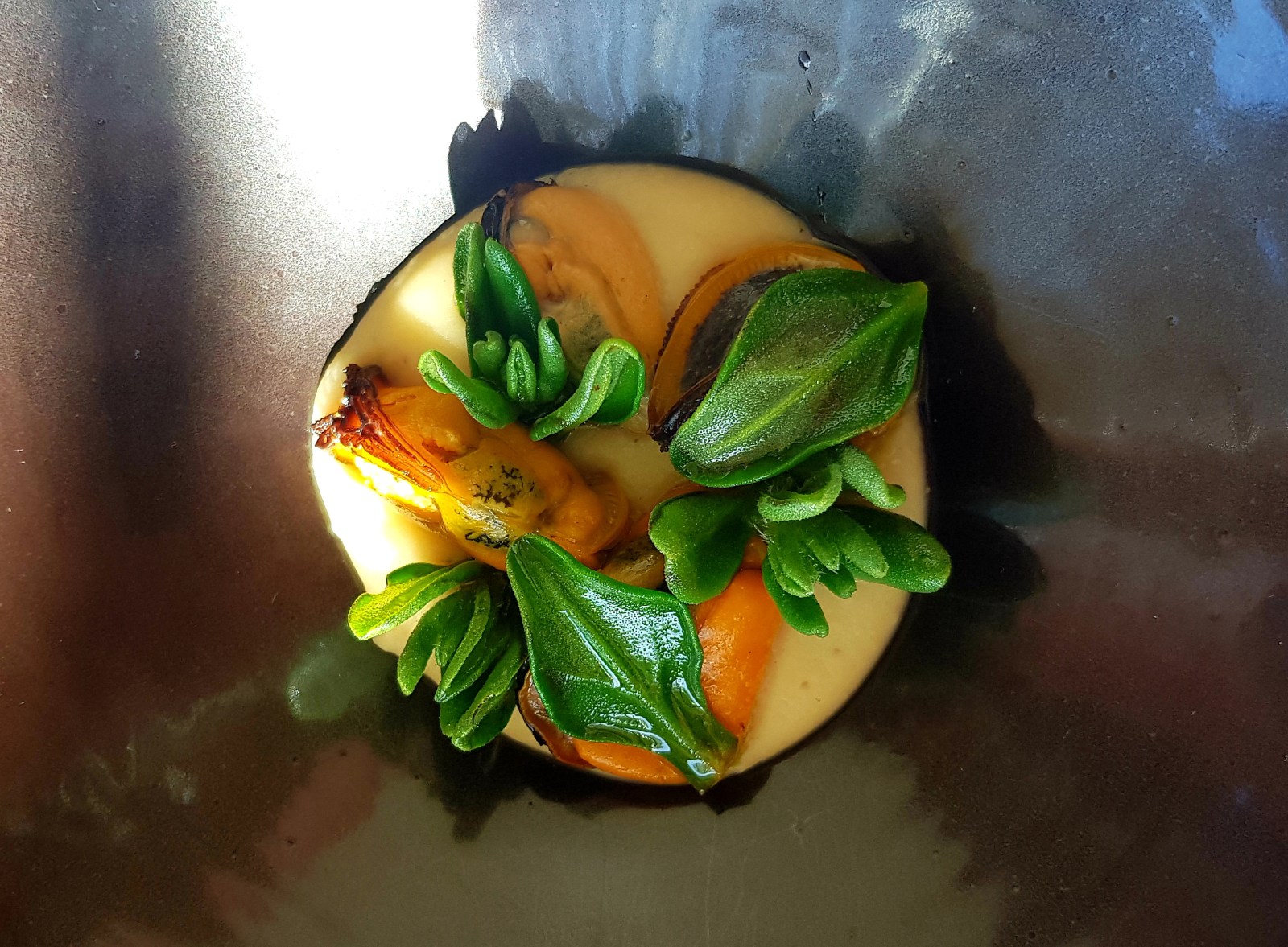 Wolfgat, and chef Kobus van der Merwe, are on every food-obsessed person’s lips. Websites and magazine articles proclaim his rise to fame. But who is this young man and what makes his food so unbelievable? Is it just hype or is this for real? I set out to fill in the blanks, first by finding out a little more about him.

At school, Kobus van der Merwe’s two favourite subjects were art and music and, naturally, he thought of pursuing a career in classical music or fine arts. At the time, though, these didn’t seem like realistic career choices, so he followed Plan B and went to culinary school. He comes from a family of food lovers and so this seemed an obvious, practical choice.

But the allure of cooking in an industrial kitchen did not excite Kobus and he decided to drop out and go travelling. And, right here, I begin liking him even more.

On returning to Cape Town he completed a media studies course and ended up as Eat Out’s web editor. Working daily with food content featuring top restaurants reminded him of how much he missed being in the kitchen, so in 2000, bored with his desk job, he quit and returned to Paternoster to help with the family business.

His parents were running the country store selling collectables, preserves, breads, cookies and the like. Adjacent to the shop was a small eatery called Oep ve Koep where they were serving a small menu featuring mainly fish, calamari and chips. Kobus took over and soon realised not only that several other restaurants in the village were serving exactly the same menu, but also that the ingredients arrived frozen from the suppliers in Cape Town – not exactly representative of wholesome West Coast seafood.

And that bold statement on that blackboard most certainly altered this man’s trajectory in the restaurant business. In a way, he was returning to his roots. Kobus comes from a foraging family and they would use things like seaweed and wild cucumbers in their cuisine when he was still a boy.

And there you have it. My next step was obvious, and when the opportunity arose to worship at his shrine of gastronomy, I grabbed it with both hands and decided to go and taste for myself.

I had not known quite what awaited us in the picturesque fishing village of Paternoster on South Africa’s West Coast, in the 130-year old converted fisherman’s cottage and cave, on which the little white-washed home was built and from which the name is derived.

I have always admired him and the work he does from afar. I have read about his many awards – number four on 2018’s Eat Out Awards list, Restaurant of the Year at the inaugural World Restaurant Awards held in Paris in February 2019, San Pellegrino and Acqua Panna’s Chef of the Year, and many more – yet he is not one for all the fuss and awards. I was excited to experience his magic.

A lovely, relaxed drive from Cape Town to Paternoster saw us arriving at his doorstep just after noon. We entered the space and were shown to our table. Had I not seen pictures of him before, I would not have known who the unassuming guy was that we passed in the kitchen. Everyone was working together. There was no loud head-chef-vibe. Just a quiet, creative space where equals were working together to bring something spectacular to each table.

Ours was out on the stoep with the winter sun warming our knees as we parked them underneath the table, ready to go on this culinary adventure. With every dish that was presented, Kobus arrived to tell us what we were eating. With every mouthful we were transported back to nature, from where our food had come. The blue skies and the white beach stretched out in front of us, and the smell of the Atlantic Ocean filled our senses – the perfect backdrop to this inspired meal.

Bottles of water with buchu (Coleonema alba) in them were brought to our table, we ordered a bottle of AA Badenhorst White Blend 2016, which paired exceptionally well with all the dishes, and the food began arriving.

Next to arrive was white mussels with a pickled waterblommetjie (Aponogeton dystachios) and buttermilk rusk crumbs, and an elegant glass with a shucked oyster, preserved quince and soutslaai (Mesembryanthemum guerichianum).

Our second course comprised a purée of heerenbone (our very own, authentic South African heirloom lima beans, still regarded by many as the aristocrat of beans) with Saldanha Bay mussels and dune spinach (Tetragonia decumbens). (See main image.)

This was followed by a traditional South African dish of pickled fish made using angelfish, with a wild garlic masala (Tulbaghia violaceae) and sambals, including deep-fried geranium leaves (Malva neglecta).

The smoked snoek course came wrapped in a blanket of sea bamboo or kelp (Ecklonia maxima), and in a bath of warm tomato broth that tasted of the ocean (below). 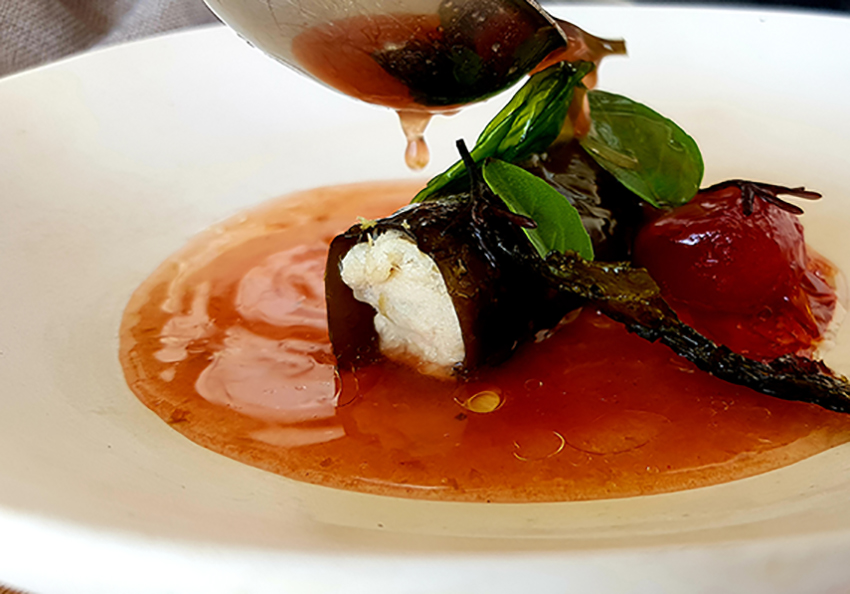 The only red meat course was one of blesbok (Pyropia capensis), two small fillets, one topped with finely shaved blesbok biltong and the other with a creamy seaweed. (Below.)

By now the women at the table were quite sated, so we tasted before sliding the plates across to the men to finish. Strategically a good move as we had seen what was on the dessert menu.

A very simple and light, yet effective, palate cleanser arrived next. A slice of Adam’s fig topped with drained Amasi and seepampoen (Prenia vanrensburgii).

The final course arrived and we were not disappointed. I find that often meals start out strong but tend to fizzle out at the end. Kobus’ plum ice-cream was delicious, and the light green wild sage (Eriocephalus africanus) meringue that was also on the plate was ambrosial.

(If, by now, you’re thinking that I am a botany genius, my response will be to give credit where credit is due – I found all these scientific names on Kobus’ menu.)

The wine list and menu are representative of the area, and Kobus pays beautiful homage to the West Coast. Next time I go, and yes, there will have to be a next time, I would like to see what wines he pairs with each dish. The wine list was interesting, and many of them we had not heard of before. However, knowing the standard of his food, we were sure that all the wines would be a pleasant surprise, and one we look forward to.

Kobus works with nature to bring dishes to our tables that are simple yet innovative. The area is so rich in fauna and flora, and he has made it his business to understand both and to use them to his advantage.

What I enjoyed most about the experience at Wolfgat, other than the inspired cuisine, was this man’s humility and the calm way in which he arrived at our table to explain each dish. I could sense his connection to nature, the very thing that keeps us humble and grounded.

Today his genius is being spoken about globally, and written about and edited, probably at the same desk where he sat at the offices of the Eat Out guide. What did I learn from Kobus van der Merwe? Well, to remain true to oneself, grounded and authentic in one’s beliefs, and pure in one’s pursuits.

But, back to my question: Who is this humble, unassuming man, and how did he come to run the world’s top restaurant in the simple fisherman’s village of Paternoster? Kobus van der Merwe reminds me of Magnus Nilsson who has been running Fäviken north of Stockholm in Sweden, on a remote estate since 2008 (he will be closing his doors later in 2019) – like Magnus, I believe that Kobus just wants to create beautiful dishes using nature’s abundance around him. He is, after all, the guy out every morning, hunting for interesting ingredients to use in his seasonal menus and finding inspiration in nature. He is the guy who makes use of forgotten indigenous ingredients and focuses on honouring the very environment from which we eat at Wolfgat. And he’s the guy who owns this destination restaurant, a two to three-hour drive from Cape Town.

I once heard Prince Harry saying that no royal wakes up and wants to be king. And I believe that Kobus van der Merwe did not aim to be voted best restaurant in the world earlier in 2019 – his aim was, as his blackboard stated a few years ago, to make “hyper-local, considered, heritage, slow, seasonal Strandveld food”. And he has succeeded. DM