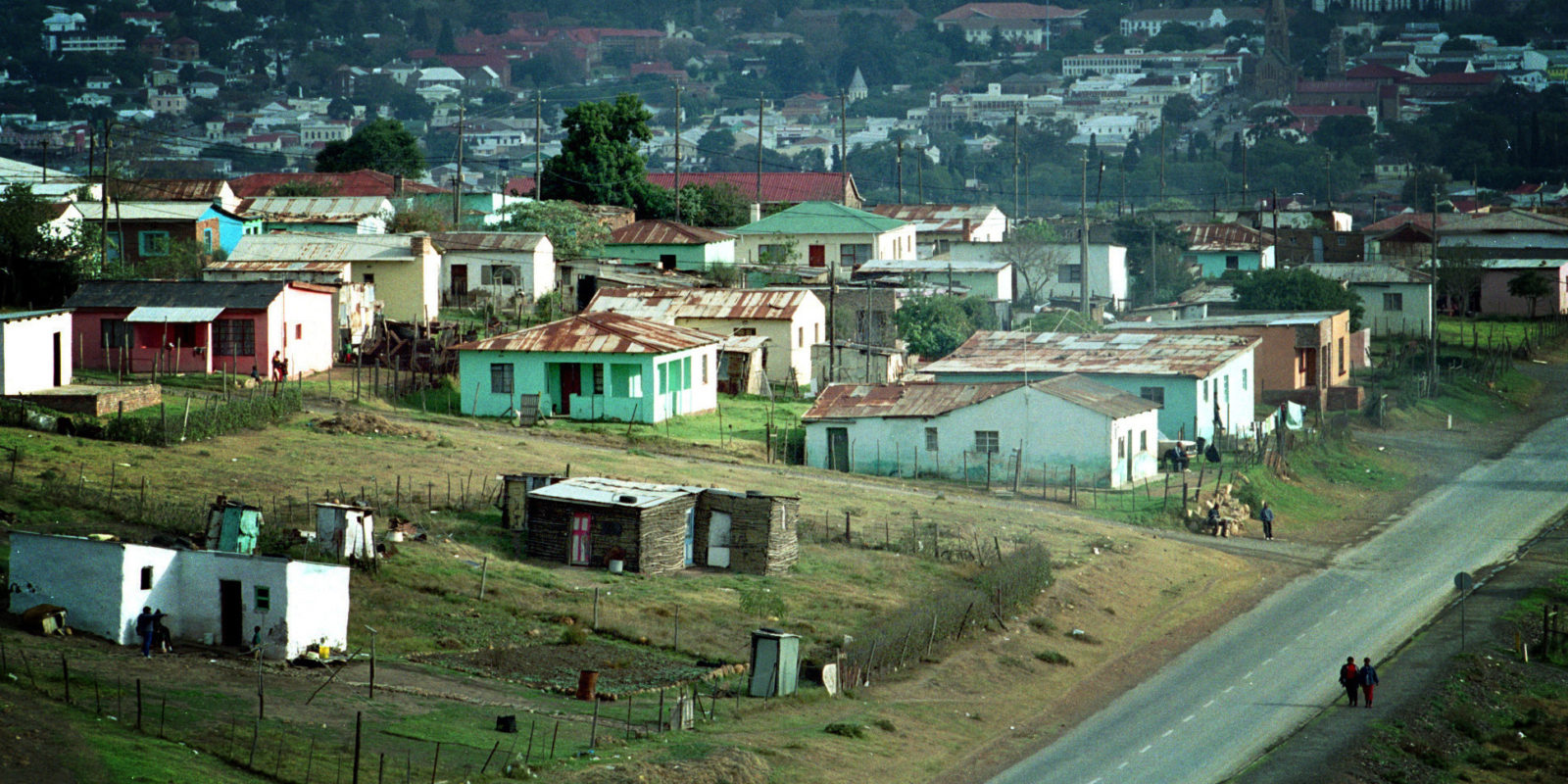 After spending millions drilling boreholes of its own accord to bring water to the people of drought-stricken Makhanda in the Eastern Cape, the humanitarian organisation Gift of the Givers has abruptly upped and left as accusations swirl in the City of Saints over verbal agreements for payment, procurement processes and corruption.

Outside the stadium where a huge, white marquee housed the 2019 national Freedom Day celebrations (with a few weeks to go to the elections, most of the crowd came in ANC gear) in April, Gift of the Givers parked a few of its lorries – one or two with green JoJo tanks containing borehole water – to serve the sanitation and other water needs at the occasion, and some more huge trucks from which 60,000 two-litre bottles of water were distributed to anybody who queued for it.

Few in the queues wanted to give us an interview, but some of those who did were from elsewhere in the drought-stricken province, taking back home with them six-packs of bottled water, free of charge. In supermarkets in Makhanda, water is sold for R1 a litre – a steep price for something that should be free, if you’re struggling with money. In the small towns of the Eastern Cape, water supply is a big issue.

How Gift of the Givers came to Makhanda

Gift of the Givers project manager for Makhanda, Ali Sablay, was around on the day. He readily agreed to an interview and explained how it came about that the humanitarian organisation intervened in Makhanda. He said the Makana Local Municipality asked them to help, and they came on 9 February and distributed bottled water to those in need. The organisation also put up signboards at entrances to the town to announce their presence.

Two days later, Gift of the Givers realised the need was greater, and within days they were drilling boreholes with a verbal agreement from the municipality that they would be paid for it, should the municipality find the money.

Legendary hydrologist Gideon Groenewald came to help – the rocks in the area make drilling particularly difficult and expensive – and soon the town had two to three million litres of water at hand.

Sablay said Groenewald has no equal, compared to the others who had tried to help the municipality before.

The man who reads the rocks

Groenewald is a loner and an eccentric, but also a genius with a passion for his job, which he describes as “reading the rocks”. Wearing a leather hat that is now 40 years old, he said he has walked 9,000 kilometres around various mountain ranges in the country, documenting the terrain in 10 centimetre strips – by measuring it with a ruler.

When someone asks him to look for water, he uses this knowledge and Google Maps, and then prays, or meditates, or focuses (he’s not particular about how this is described) between 1am and 4am at night. As a devout Christian, Groenewald felt at ease with the religious motivations underpinning the work Gift of the Givers does. He said he helped out of conviction, and did not expect payment for services rendered, although his expenses for the project were covered.

Sablay said Gift of the Givers provided the town with two to three million litres of water within those first few days.

“There are tenders going out from government, and we’re not badmouthing anyone, but [the contractors] will tell you they have done all the studies. They will drill, drill, drill, they won’t find water, they will get paid for it. We drill, we find water, that’s the main thing,” he said.

“Some of the tenders put out there, they put out a drilling contract, and when the drilling is done, they say ‘you paid us to drill, not get water. We drill, and the first time we get water’.”

Sablay also gave a vague indication that Gift of the Givers’ work in the town was done after the two-month intervention. By all accounts, Gift of the Givers dragged Makhanda out of its crisis on the eve of the 8 May general elections, and public sympathy for the organisation is strong.

Potholes littering the roads of this once quaint town and sewage leaks tell the story of municipal neglect. Even though it was put under administration in 2014, the municipality still hasn’t got a grip on its fiscal management. It owes Eskom R51-million, Amatola Water R36-million, and the department of water and sanitation (DWS) R38.4-million. It hardly has any money in its kitty to run the town.

Unemployed People’s Movement member Ayanda Kota said he believed Gift of the Givers had refused to pay kickbacks to local officials and therefore was not paid by the municipality.

“In Makana Municipality we are living through the worst of times. Our city has become an island of sorrow,” said Kota.

“Now the company has to leave and again we will have dry taps and drink contaminated water.”

A presidential ‘thank you’

President Cyril Ramaphosa, who gave the keynote address during the Freedom Day event, personally enquired from Sablay how Gift of the Givers’ intervention over the previous two months was going.

“I gave him an update on the stuff,” Sablay said.

In his speech, Ramaphosa acknowledged the depth of the crisis:

“We cannot be a nation of free people when the residents of places like Makhanda have to go for so long without a reliable supply of clean water.”

He also told Eusebius McKaizer show on Radio 702 on Thursday morning that his organisation had met with the director-general in the President’s office (Cassius Lubisi), who promised a task team would look into the matter. They’ve also notified the soon-to-be premier, ANC premier candidate Oscar Mabuyane, about the impasse. Ramaphosa’s spokesperson, Khusela Sangoni, hadn’t reacted to a WhatsApp message for comment.

The costs of disaster

It’s not clear exactly how much Gift of the Givers had already spent on the intervention, but amounts of “more than R20-million”, R22-million and “R23- to R30-million” have been mentioned. In the Freedom Day interview, Sablay said: “Gift of the Givers has spent, and so far we haven’t received a cent from any government department or municipality. All this funding is coming from ourselves.” He added: “Of course, we cannot do this alone. It’s a very, very expensive exercise.”

Incidentally, the DWS’s Sputnik Ratau in a statement on Thursday mentioned the department’s obligations under the Public Finance Management Act and said it had previously transferred “an amount of R22-million” to the local municipality “with the sole purpose of assisting them to deal with drought challenges in the area”.

He said the DWS had no agreement with Gift of the Givers. (DWS, incidentally, hasn’t got a proud track record either, and minister Gugile Nkwinti, who hails from the Eastern Cape and who took over from Nomvula Mokonyane in February 2018, has spooked many in senior management by instituting anti-corruption probes.)

Gift of the Givers had some beef with the department, and claimed one of its officials told the organisation on Freedom Day to move its water trucks because there was no water crisis in Makhanda.

Sooliman claimed DWS was prescribing to the municipality about who to pay.

“This is R10-million of taxpayers’ money handed out freely by the government to people as remuneration for work that Gift of the Givers did.”

He added: “Our hearts are with the people of Makhanda, the elderly, the women and children and everyone who waited so patiently for water, but as a matter of principle, we cannot continue.”

The municipality’s version and the red tape

“No guarantees were given by Makana Municipality about reimbursement or funding. The fact of the matter is, at the time, we were awaiting clarity from the National Department of Water and Sanitation around the status of our appeal for drought relief and we were unsure in what form and to what extent such relief might come. We played open cards with Gift of the Givers and all parties went into the project with their eyes wide open – the priority was providing relief to the residents of Makana,” the statement said.

There is also the red tape, for which Gift of the Givers had little regard, arguing that it was an emergency situation. The municipality said the DWS gave an undertaking in October 2018 that it would fund the drilling of boreholes to assist drought relief efforts, and, “in line with the Municipal Finance Management Act and the conditions of a grant, a proper process was followed in appointing a consultant as the first step”.

This consultant would compile an underground water study and register the boreholes already drilled.

“The tender was awarded following a proper and lawful tender process, to undertake the necessary environmental impact studies and assessment of the aquifer to determine the viability, scale and scope of drilling boreholes,” the municipality said.

The municipality further said DWS has since indicated that “proper regulations must be followed in considering any funding to Gift of the Givers. We need to follow these processes so that we do not flout supply chain regulations and give rise to audit queries.”

It added that it was in the process of appointing a service provider in keeping with these processes to connect the Waainek boreholes (that Gift of the Givers made) to the Waainek Water Works “as it is crucial to augment the water supply to Makhanda West”.

The municipality also said it has “on a number of occasions engaged Gift of the Givers around possible solutions and to find another funding mechanism whereby they can be compensated for the work they have done in the City, cognisant of the fact that their work was undertaken entirely ‘on risk’ by themselves and without the same thorough and rigorous due diligence that we required of an outside contractor.

“We agreed to this deviation on the basis of the immediate and pressing need being experienced by the City, but at the same time need to ensure that we exercise fairness and diligence in the awarding of tenders and the spending of public money.”

For now, at least, it seems that the humanitarian organisation which rushed in and risked considerable expenditure is caught up between some red tape and a dry place. DM