THE ART IN ARTISAN

Getting ahead in the fine craft of chocolate 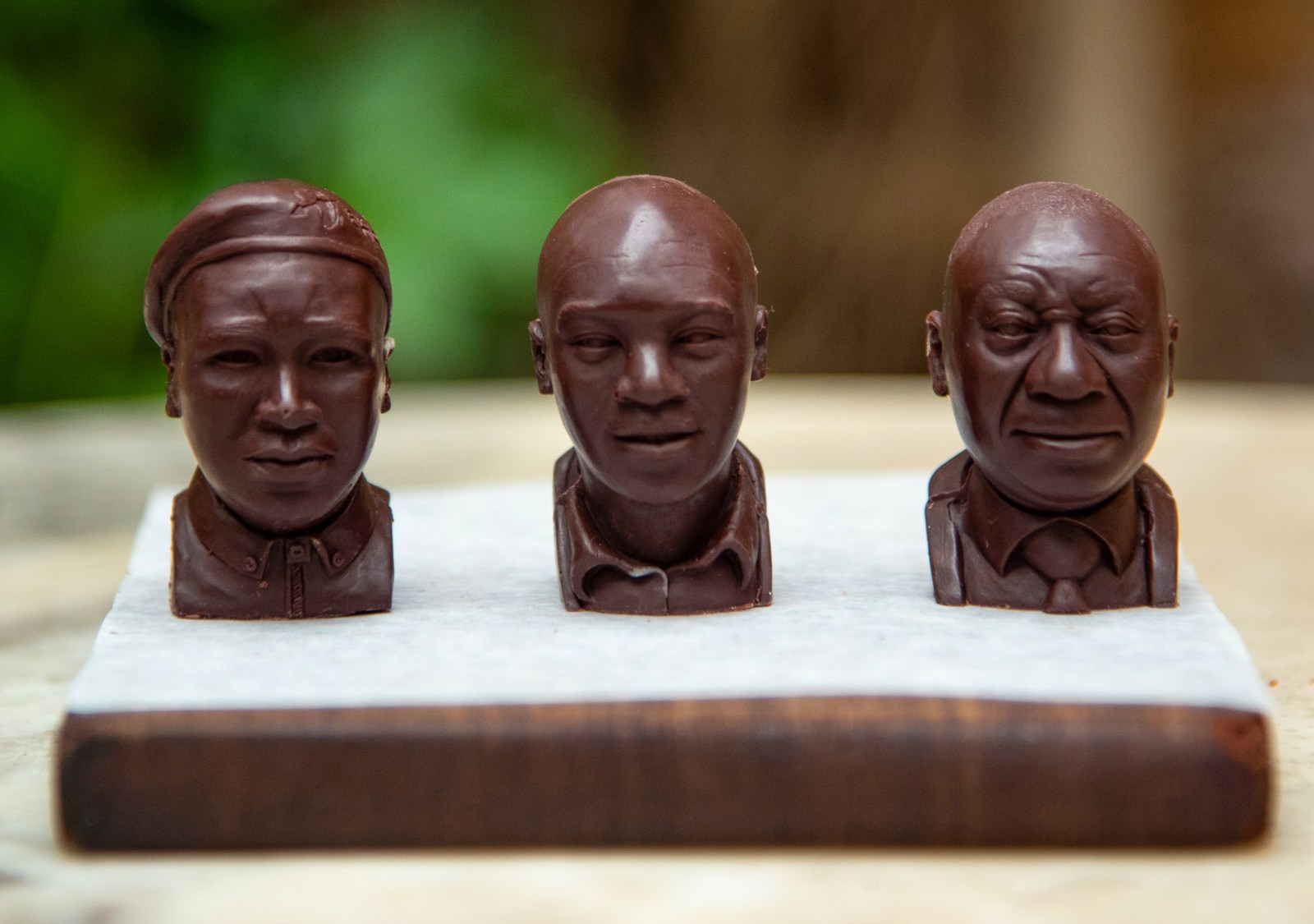 The only café in Cape Town dedicated to dark chocolate is putting the art back in artisan, inside and outside the wrapper, by teaming up with painters, illustrators and sculptors. What artisan and artist have in common shines through their collaboration.

It seems you can have your art and eat it too. Sharp-edged chocolate bonbons glisten under warm lights. Miniature chocolate sculptures of Ramaphosa, Malema and Maimane stand to attention on the café countertop. Dark chocolate slabs wrapped in prints of original artworks line the walls.

The busts were moulded by a local sculptor, the wrappers painted and drawn by artists. The chocolate is ground, cracked and tempered by hand.

The founding chocolatiers at Honest Chocolate started out making chocolate bonbons in their homes as healthy treats for themselves and friends. Anthony Gird, a freelance social development researcher at the time, was living and working in Cape Town when his friends made the grand discovery. He could craft delectable healthy chocolate bonbons from just cacao powder, coconut oil and honey. They wanted more.

Meanwhile, a friend of his, Michael de Klerk, was conducting similar experiments on his own crowd of friends in London. By the time De Klerk had returned from London, Gird had started a brand “just to have fun”, and was selling bonbons at markets.

The two joined forces and for two years they ran Honest Chocolate part-time. By the time they launched the artisan chocolate company full-time in 2014, they had raised almost R70,000 through crowd-funding. They still roast, grind and temper their beans by hand and have opened the only café in Cape Town dedicated to all things dark chocolate. 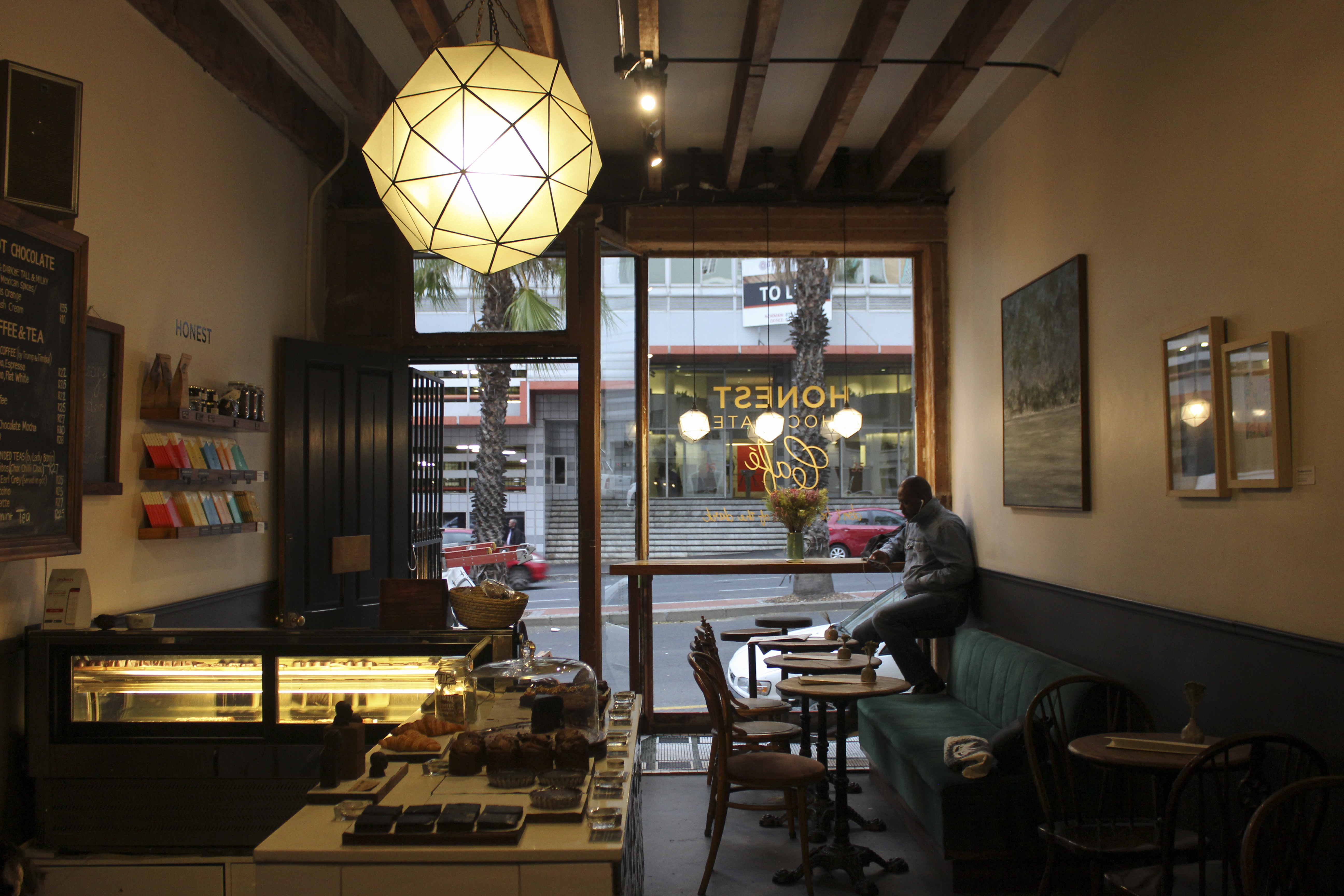 What’s in a name? In this one, only two ingredients.

“From the beginning, and now, it’s about being true to what we’re doing using old-school methods and very pure ingredients. We don’t put crap in the chocolate. Our slabs are literally two ingredients – cacao beans and a sweetener, either unrefined cane sugar or coconut sugar. That’s it. It’s very clear about what it is.

“We source our cacao beans in the most ethical way we can. We get our organic beans from Kokoa Kamili in Tanzania which is close so has a lower footprint and we know the farmers are being paid a higher price than in the normal market. We try to do everything the best we can,” explains Gird.

Other than a passion for chocolate, the two self-taught chocolatiers also had a love for Cape Town’s art scene.

“We decided that that’s what we love, so we’ll put it on the chocolate,” says Gird.

Since the beginning, Honest chocolates have been wrapped up in prints of original artworks made by local artists and illustrators. Not only are the artworks original, but they have been created to express the bean and flavour profiles of the specific bar. They take the multisensory experience of chocolate and put it down in brushstrokes and visual stories.

Honest has worked with more than 14 artists over the years, the first of whom were friends of theirs.

“We can’t afford to pay for an original artwork as a buyer would normally do, so we tell the artist what we can offer and ask if they’re interested, and they’ve all said yes. We’ve been very lucky,” says Gird.

First, Gird and De Klerk develop the flavour and an illustration idea. They search for an artist whose style they think will match the flavour, and then commission. They share their ideas with the artist, but at the end of the day, it’s not up to them.

“You never know what you’re gonna get, but it’s always good,” laughs Gird.

One of the latest artists they have collaborated with is Mike Sherman. Like Gird, he got into his current line of work because of friends. He studied graphic design at Vega in Cape Town and expected to dive right into agency life. Alas, his friends had other ideas. He illustrated something for a friend’s movie and has been an illustrator ever since.

He was tasked to illustrate the slab containing miso and tamari sunflower seeds in 70% dark chocolate with unrefined cane sugar. He explains that because the flavour profile is so distinctive, it was fairly easy for him to attach a narrative to it which he could then translate into an illustration. 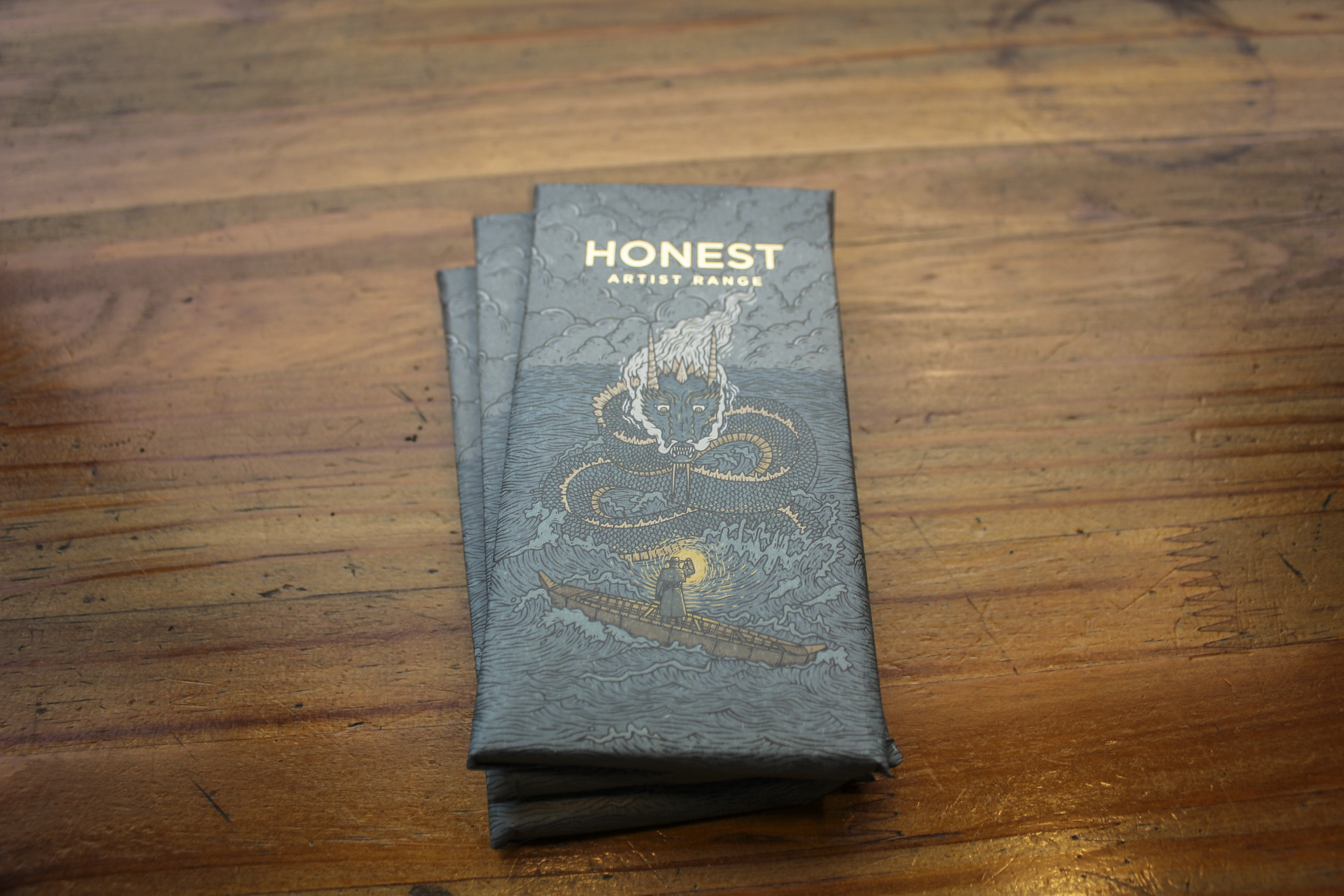 The slab wrapper designed by Mike Sherman is one of the latest to feature in Honest’s Artists Range. Image Christi Nortier

“The chocolate takes inspiration from umami and Japanese flavours and I wanted to incorporate that into my design somehow. A Sea Dragon seemed to be a good fit for those salty taste profiles and the man in the longboat fearlessly holding up the lantern brought in the ‘Don’t Be Afraid Of The Dark’ slogan that Honest lives by,” explains Sherman.

Sherman found that the chocolatiers do hand the reigns to the artists.

“The Artist Range was a true collaborative effort but the fact that they were so trusting in my work gave me the platform to be able to make the final piece my own,” Sherman says.

Fans of the artists’ wrapper were very alarmed in 2018 when Honest relaunched their classic staples with a simplified package design for retail. Some have recycled the wrappers into their own artworks, like light switch covers and découpage trays.

“We always intended to bring back the Artists Range. That was never going to go away. It’s part of how we can change things up and keep having fun. Chocolate is mainly about having fun, so it’s part of that,” says Gird. 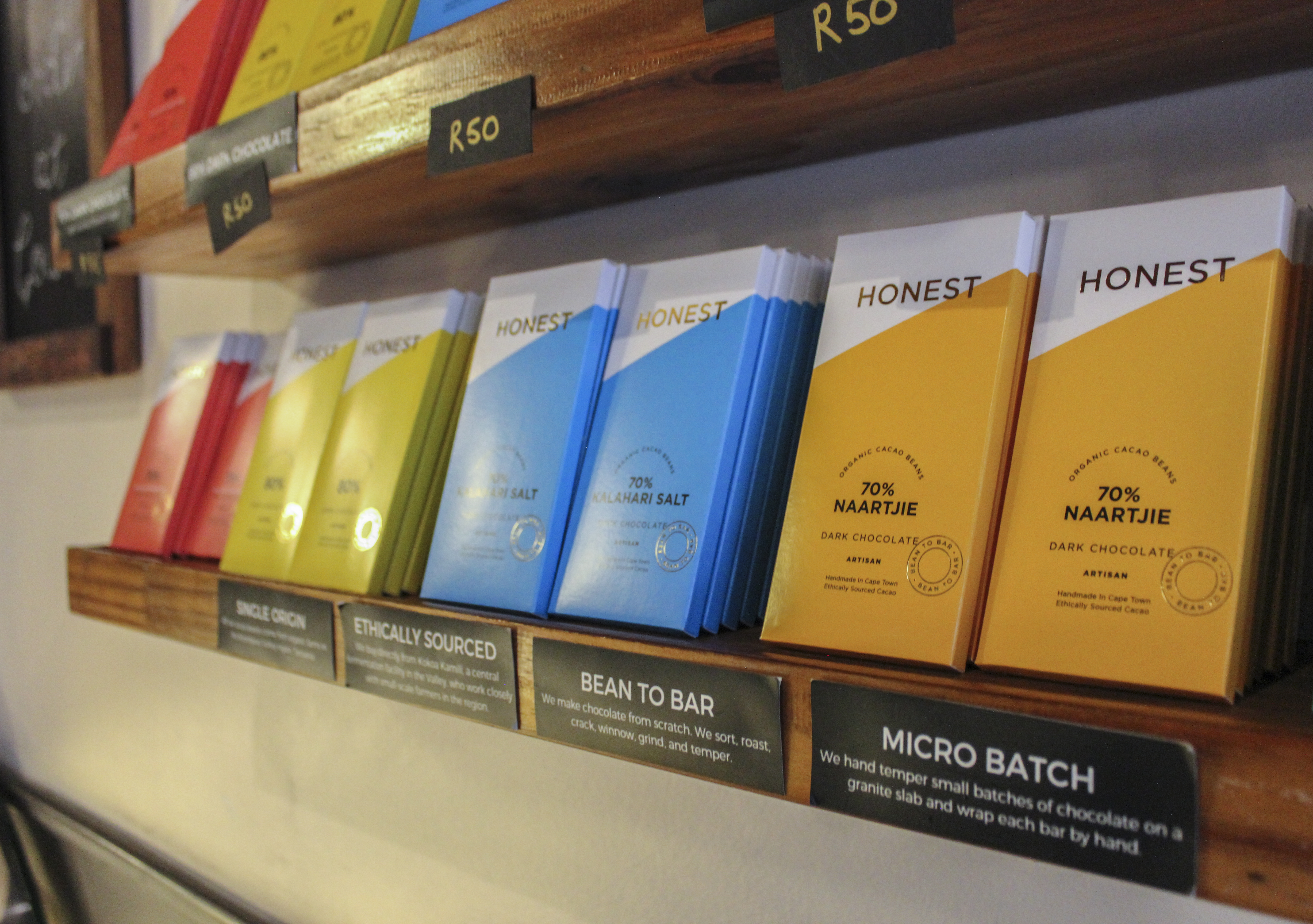 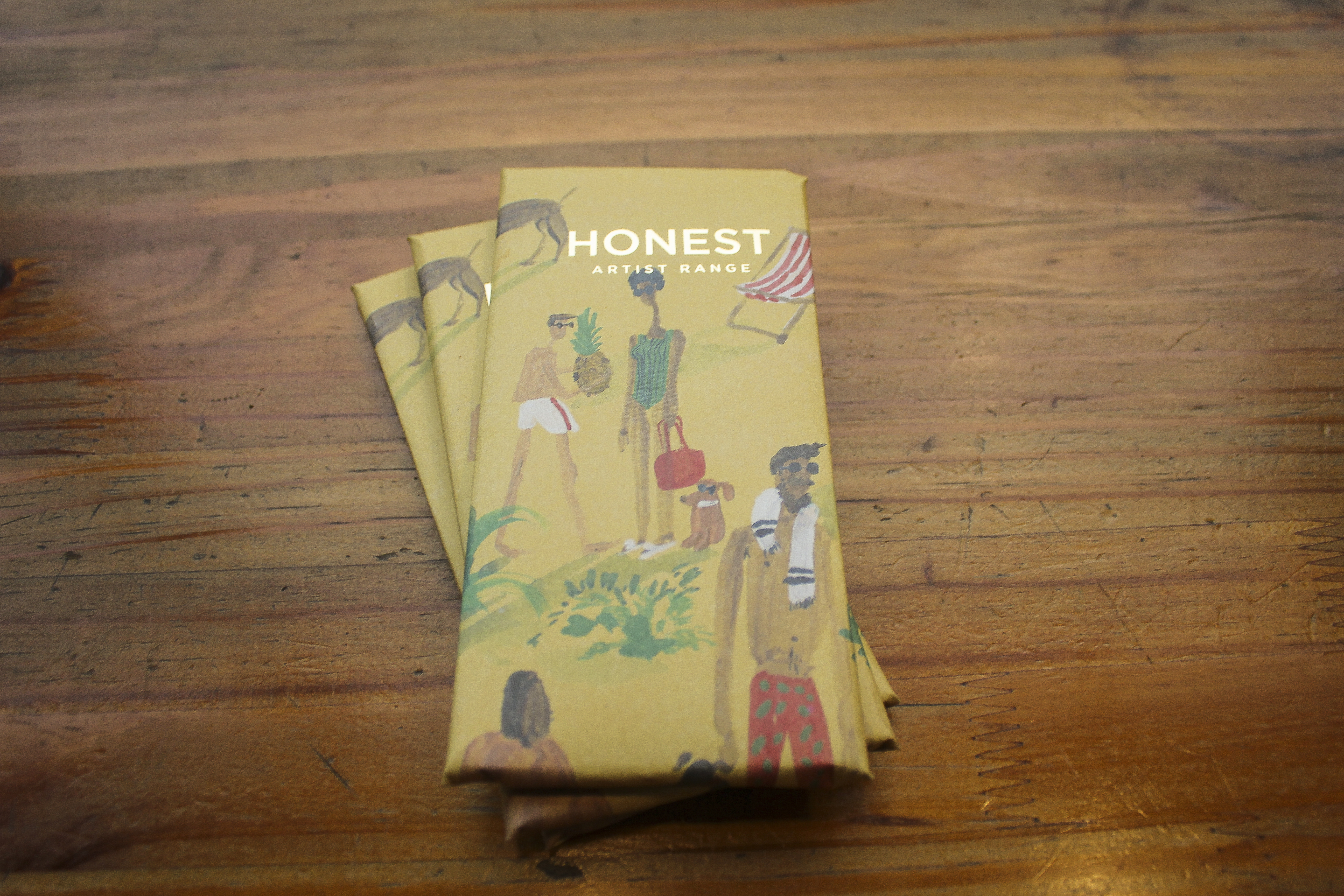 The slab wrapper designed by Kirsten Simms is also new on in the range and packages a 70% dark chocolate slab with pineapple and buchu. Image: Christi Nortier 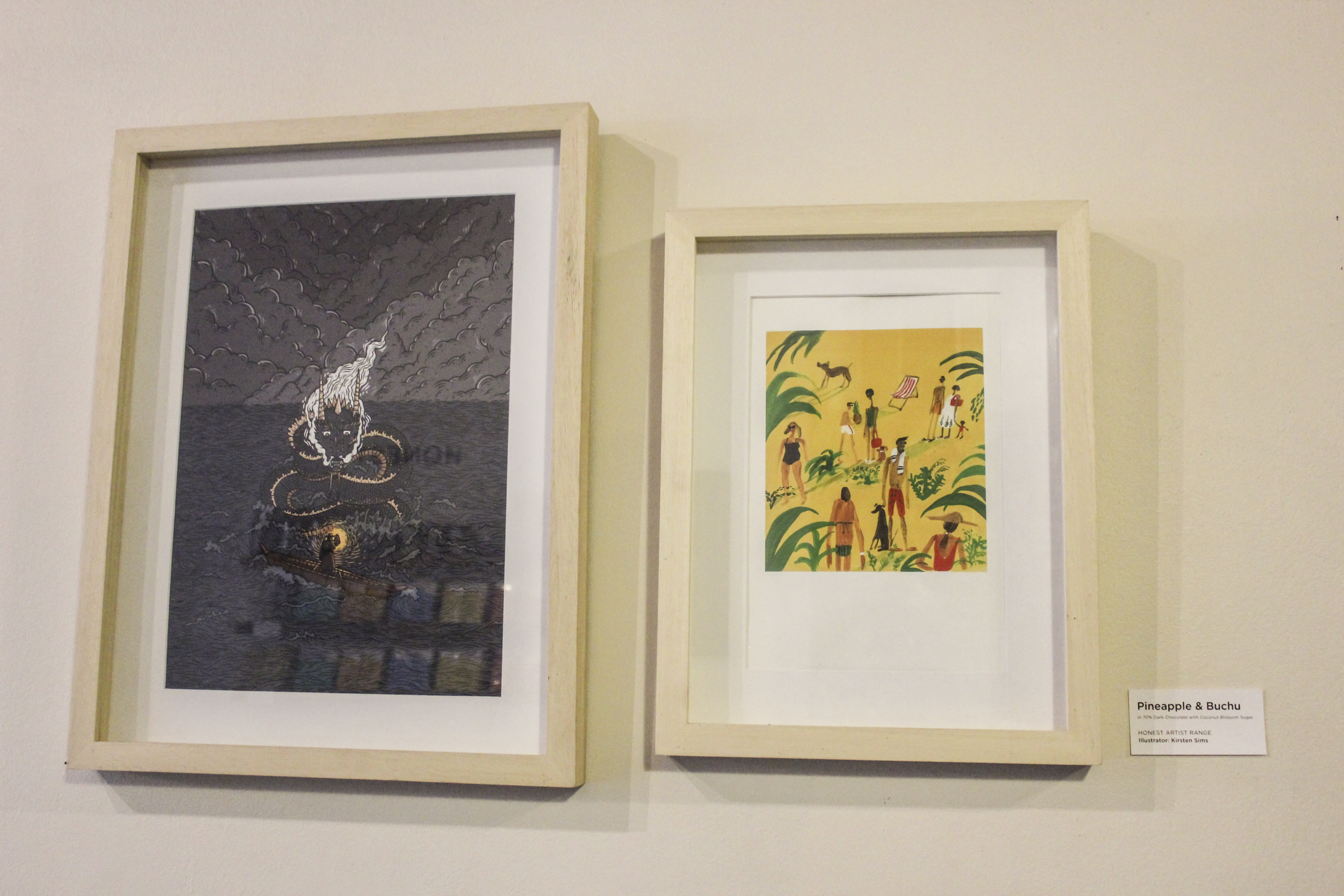 The original artworks created by Sherman and Simms hang in the chocolate café along with those previously featured in the range. Image: Christi Nortier

Their collaboration with the arts doesn’t stop there. During the 2014 and 2019 election seasons, they commissioned the sculptor Margaret Young to create clay sculptures of political leaders’ busts which they could then use to make food-grade silicone moulds which in turn created solid chocolate sculptures.

“We had an intern working with us to learn about chocolate, Margaret Young, and we didn’t know that she was a sculptor at all. I was chatting to Michael about doing chocolate sculptures and she said she can sculpt, so she can give it a go,” recounts Gird.

“We didn’t know, so we didn’t expect anything. We decided on political heads because elections were coming up and we could do a ‘vote chocolate’ campaign. She came back with the Zuma head first and it was amazing, so she did the rest of them.”

“People love them. People order them and give them as presents, all for different reasons of course,” laughs Anthony.

Young adds that people do enjoy them, especially when they see the small size and intricate detail of the faces up close. Otherwise, they are sometimes sceptical of taking the first bite out of someone’s face.

While chocolate was not directly Young’s medium, she had fun understanding this new “clay”.

“The original clay sculptures were created specifically to become chocolates – their size and the level of detail were chosen with this in mind. For example, each political figure is made of solid chocolate. If they were larger, I think it would be too much chocolate to eat in one sitting. If they were hollow or had soft centres, they would be too fragile to be practical.

“Honest has the more challenging task of casting them in chocolate, which can be quite fiddly because of the level of detail. If one isn’t careful, air bubbles cling to the detailed/deep parts of the moulds, like noses and ears,” she explains.

For Gird, this is his staple “clay”, and it gives him immense creative freedom.

“I enjoy the endless possibilities. It is so versatile, and you can make so many different things depending on how you do things and what you add. There are so many options that we have never had a creative block,” he explains.

He and De Klerk have moved more into the business and product development side now that the business has grown into a chocolate café, a chocolate shop and studio with four chocolatiers. Gird sees their café as a platform, or a sort of gallery, where they can show people what they create.

“You start with your bean, which in a way is a blank canvas. But in the everyday, you are more of an artisan because you do what you do well, and the creativity comes when you think of new flavours. Our philosophy is to do what we love, in the same way that an artist wants to,” explains Anthony.

“Their collaboration with local artists has always been part of their identity and they have been supportive and enthusiastic,” says Young.

“Small chocolatiers that choose to still rely on manual labour are creating something with their own hands in a very direct way. In many ways that is a similar experience to making a shape with some clay. And if you learn to do either well, perhaps it becomes an art.” DM