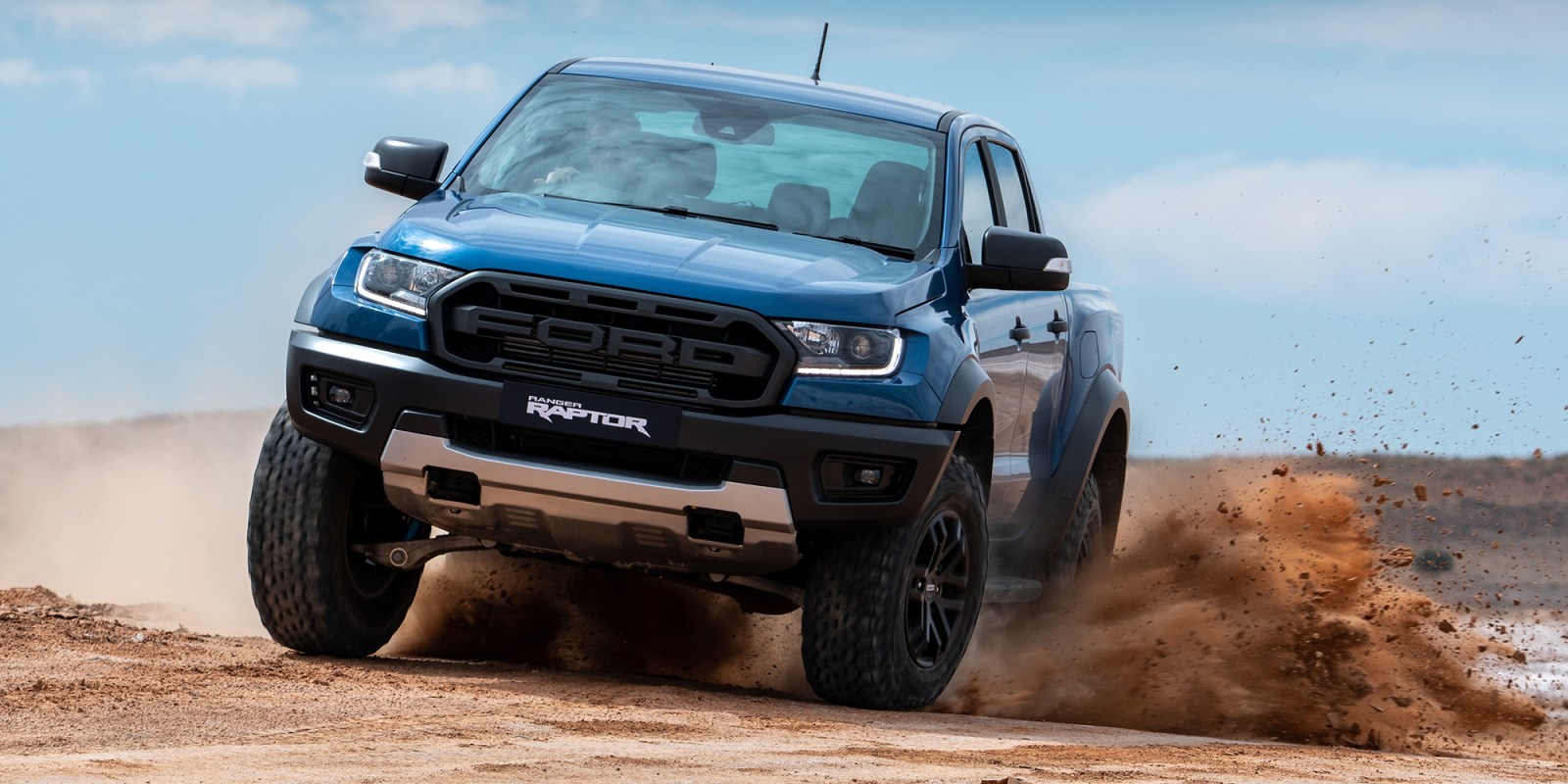 It’s not the most powerful bakkie on the block, nor the fastest. But the new Ford Ranger Raptor is arguably the first true performance bakkie built by a South African manufacturer — and it has the pedigree to match. Is this the start of a new trend?

The horizon is blurred by the midday heat, and all I can see in the rear-view mirror is a rooster tail of billowing dust. Not that I care what’s happening behind me: Right now, my attention is firmly focused on the dirt track rapidly unwinding ahead. 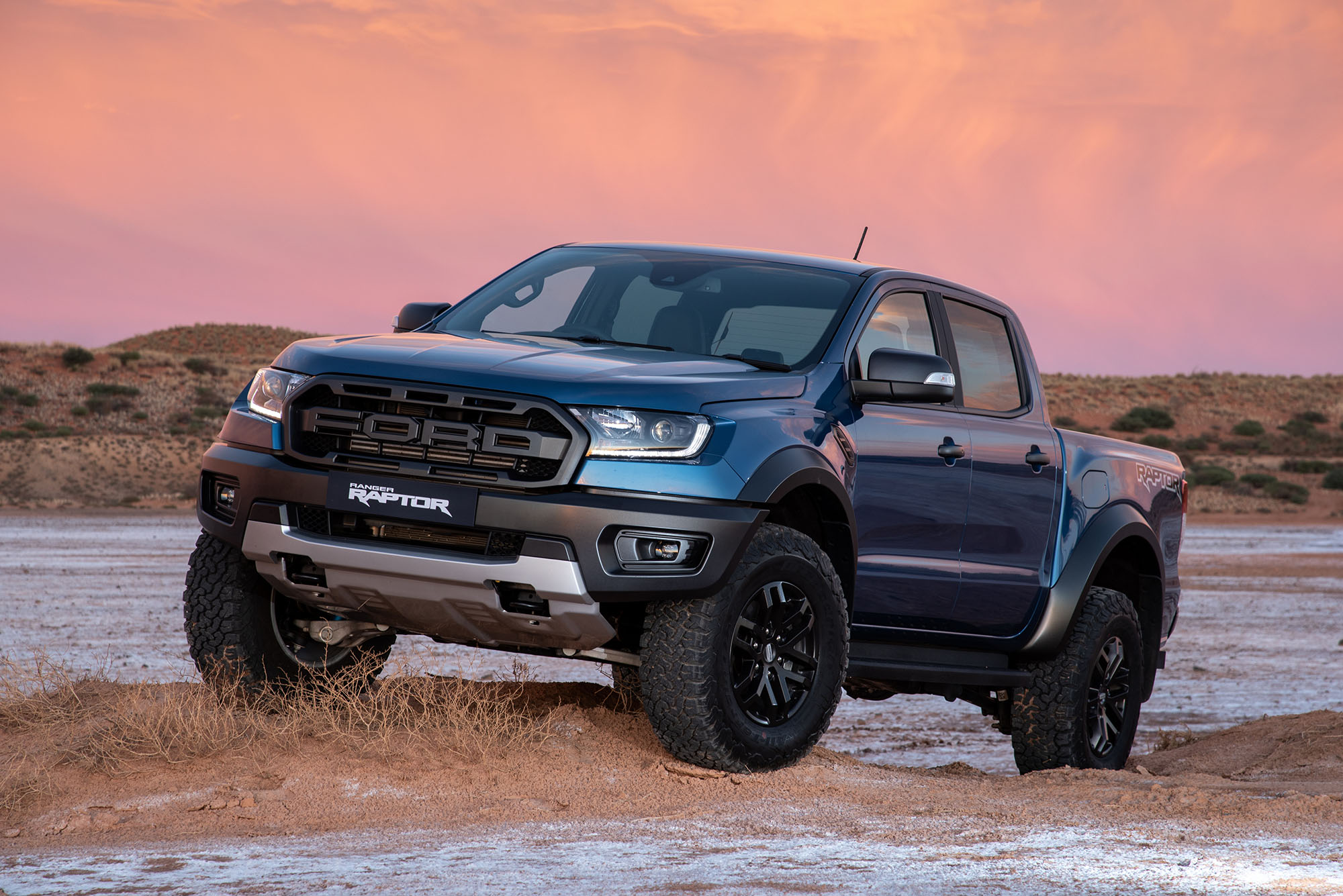 I’m on a vast salt pan about 100km north of Upington, throttle floored in Ford’s all-new, highly anticipated Ranger Raptor — a double-cab bakkie fettled to deliver adrenalin-pumping performance: In bakkie terms, that is.

At 155km/h the sharp right at the end of the long straight comes up faster than you think — and there’s a nasty little culvert just at the point I should be braking. The Raptor isn’t at all flustered: It soaks up the impact of the dip and stays more or less stable as I throw out the anchors.

I turn hard, the Ford still going much too fast — but somehow, the nose obediently follows the steering’s lead, and while the rear steps out and the tyres scrabble for grip, there’s a lot more composure and balance than you’d expect of a bakkie being hammered through soft, salt-encrusted sand. 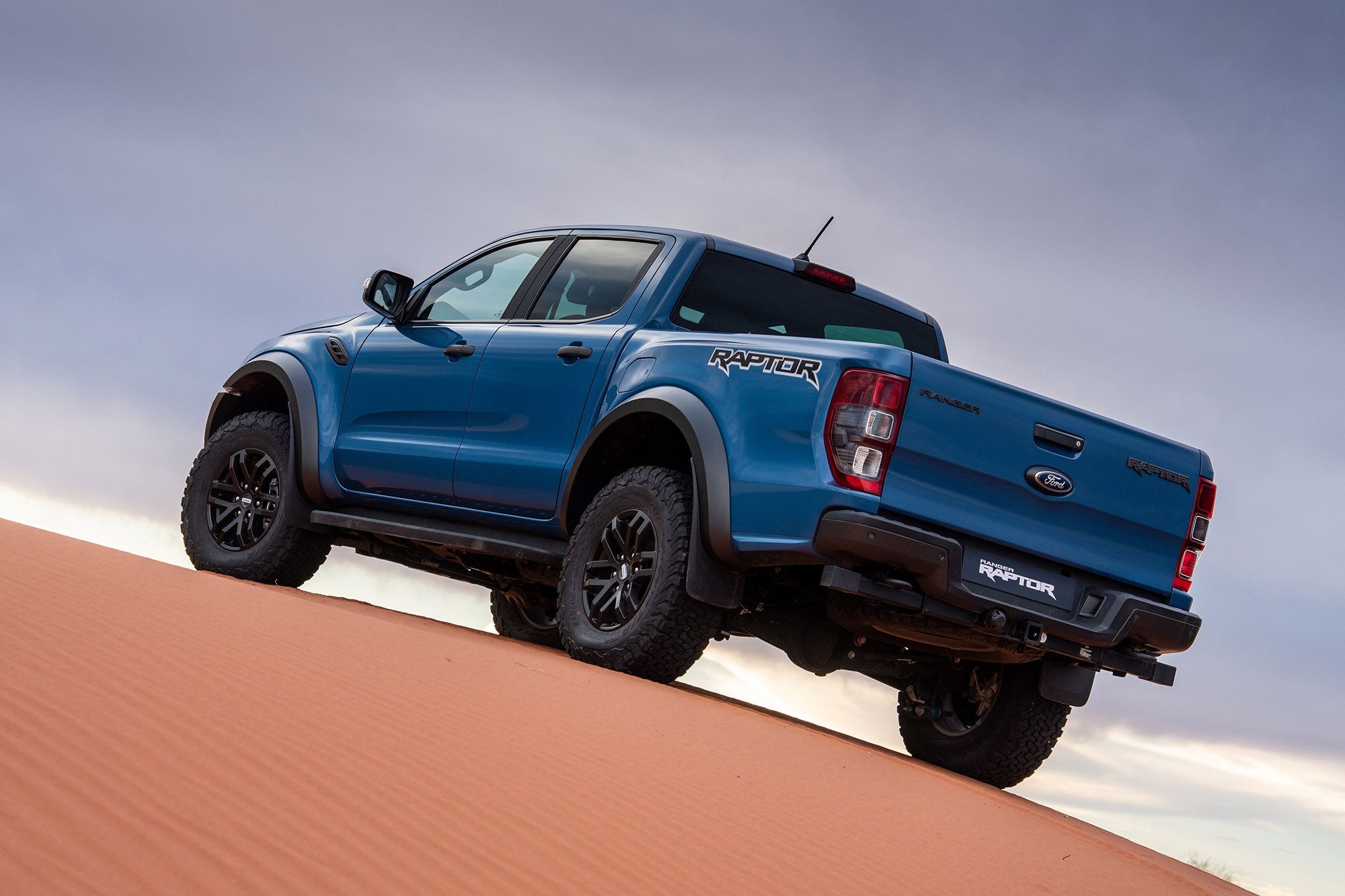 In a standard Ranger, there’s no way I would have made the corner. But then, the Raptor is a far cry from your average double cab.

In a country where the top-selling vehicle is quite often a pick-up, and not a passenger car, it’s surprising that nobody has produced a truly performance-focused bakkie before. I’m not talking after-market go-faster, but a vehicle developed from the ground up.

At the most expensive end of the double-cab segment, Volkswagen and Mercedes Benz have been engaged in a big-engine, big-power slugfest — but the Amarok V6 and the X-Class V6 remain big and heavy cruisers, primarily designed for speed and comfort. 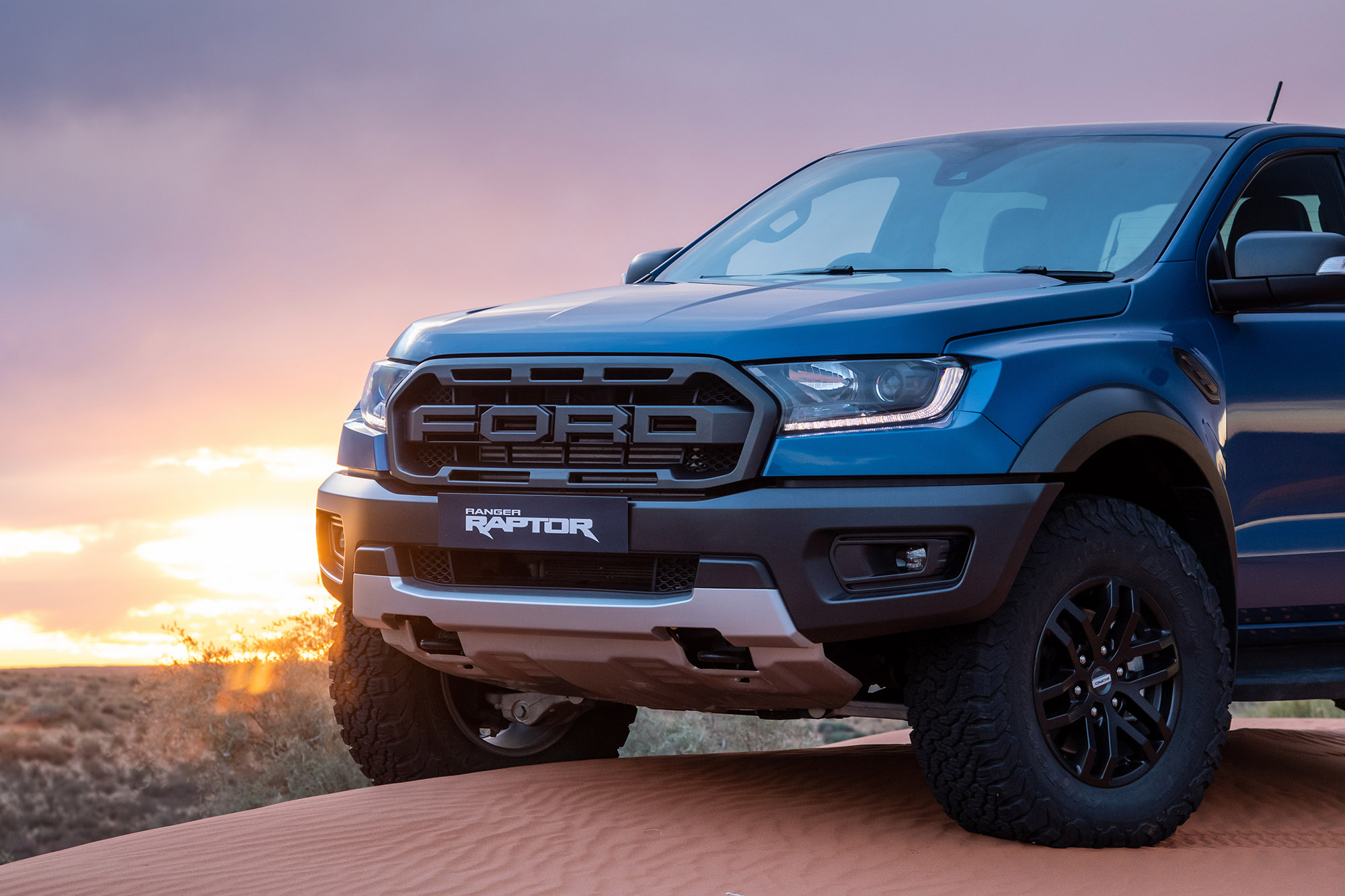 The Raptor’s approach is completely different. Rather than opting for a big V6, or even V8, with huge muscle to match, Ford’s focus is on the chassis and suspension to optimise handling and composure, regardless of the terrain.

Sure, it’s not shy in the power stakes either, thanks to a two-litre, four-cylinder bi-turbodiesel credited with 157kW of urge and 500Nm of torque. That’s the same as a standard 2.0BT Wildtrak — but the secret of the Raptor is how well it applies that urge.

Under the skin, the performance Ranger gets a unique chassis with a bespoke suspension set-up. A lot of engineering love and care has been lavished on those underpinnings, together with an exhaustive rough-terrain testing programme on three continents. 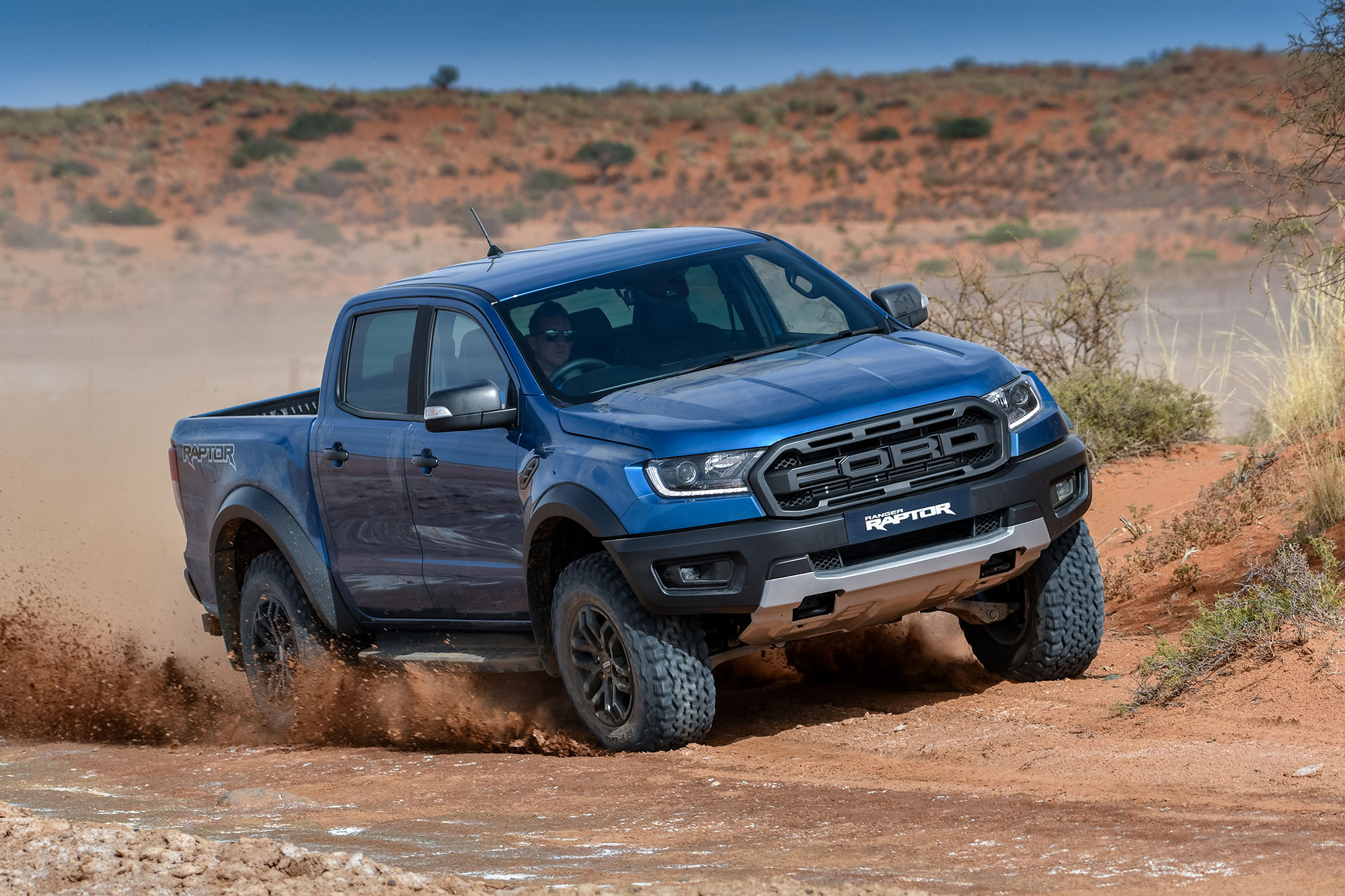 There are purpose-designed, beefed-up suspension arms and stronger engine mounts, while the Ranger’s leaf springs have made way for an independent multilink rear suspension. The tracks are 15cm wider, and the Raptor stands 50mm taller.

And then there are the dampers. Off-roaders and mountain bikers will immediately recognise the Fox brand: A US company that builds shocks for extreme conditions.

In the Raptor’s case, there’s a Fox Racing damper on each corner, delivering a combination of absorption and stability that’s streets ahead of a standard shock absorber. 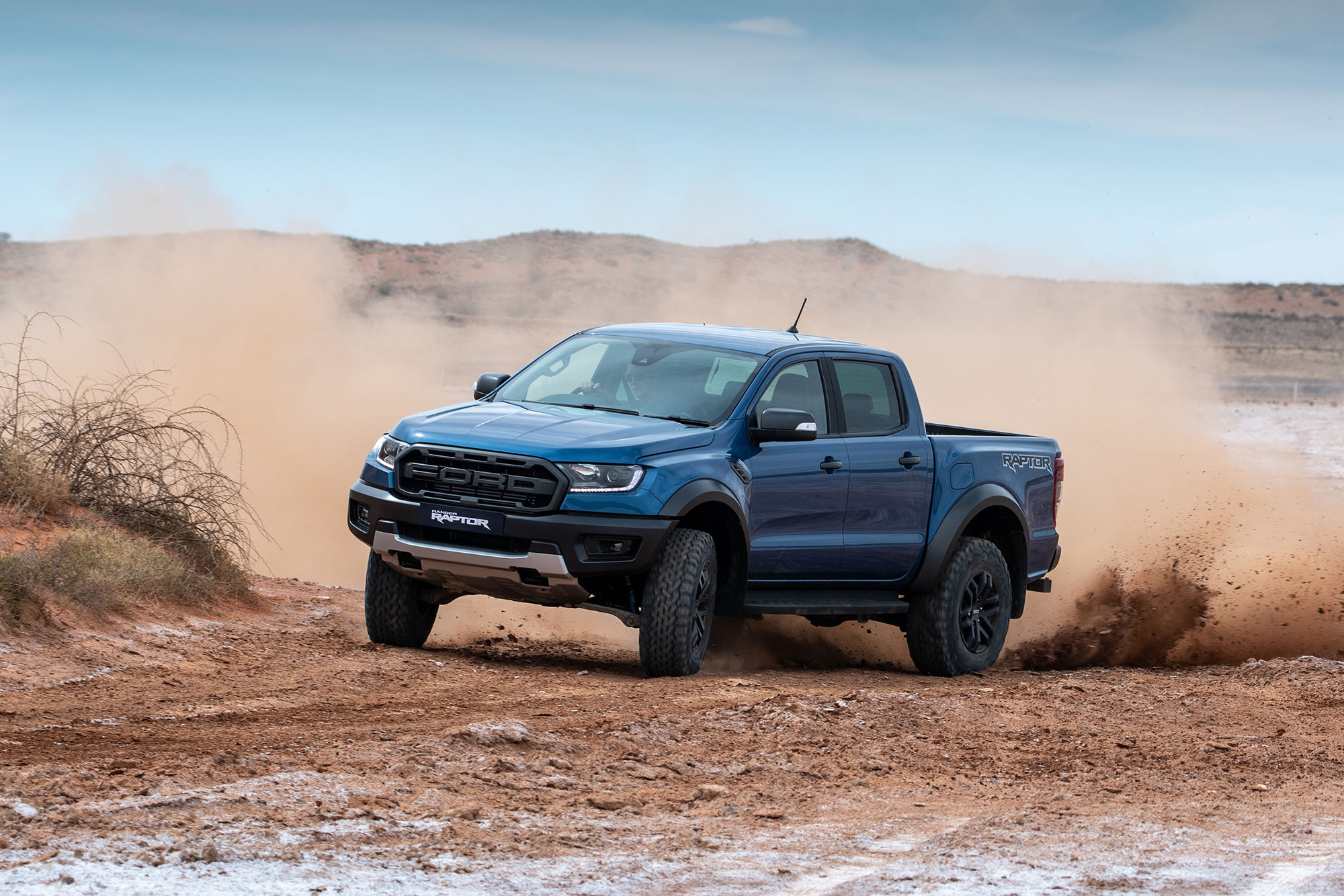 Even the wheels and tyres are special: The blackened 17-inch rims are shod with 285/70R17 BF Goodrich K02 all-terrain rubber specially developed for the Raptor.

Bulging wheel arches barely contain those wheels because of the wider tracks, while a huge, blacked-out grille dominates the front end. A new bumper with LED fog lamps and bigger air ducts also contributes to a look that’s a lot more menacing than the normal Ranger.

Back to that salt pan in the Northern Cape, where Ford laid out a series of test tracks and routes to explore the Raptor’s considerable capabilities in a safe, enclosed (and remote) environment far removed from public roads.

Right now, I’m on the so-called rally track: A course that meanders its way through and around part of the pan. There’s that long, fast straight, followed by a sharp right. Then some S-bends snaking their way through rock-strewn terrain. 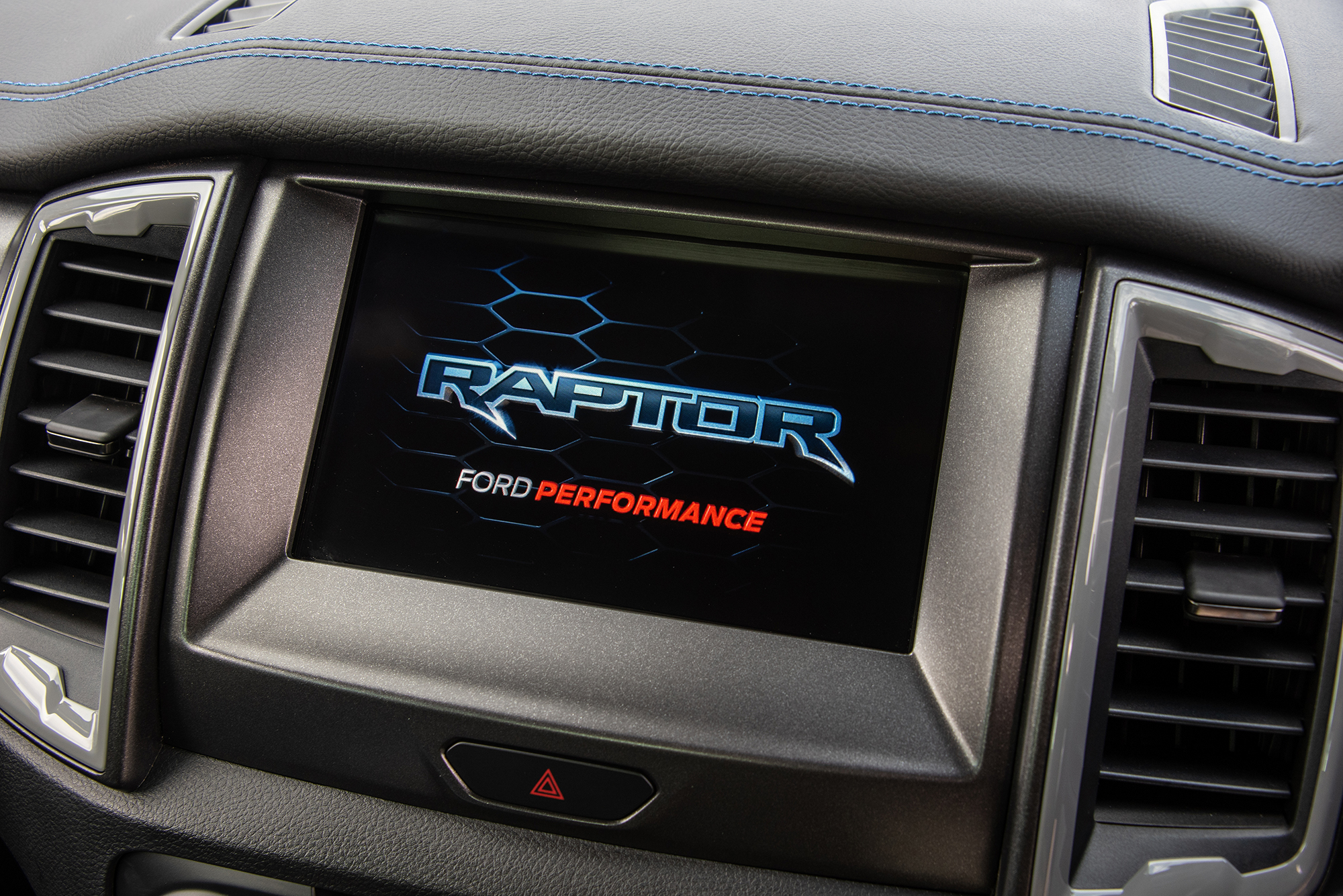 More sweeps, curves and corners follow, with a couple of furrows and bumps to keep you alert — including a mound that launches the Raptor skywards at speed. Think mini-Dakar without the dunes, and you get a general idea.

The big Ford is in its element. It’s not blindingly fast (157kW only goes so far if it needs to propel 2.3 tons of metal) but there’s enough pep for frisky performance, assisted by a 10-speed auto gearbox that tries to find the optimum combination of ratio and urge.

But what it lacks in rip-roaring acceleration it makes up for in sheer handling capability. I have not driven a production bakkie that can absorb as much punishment as the Raptor and still stick to the chosen line with such balanced composure. 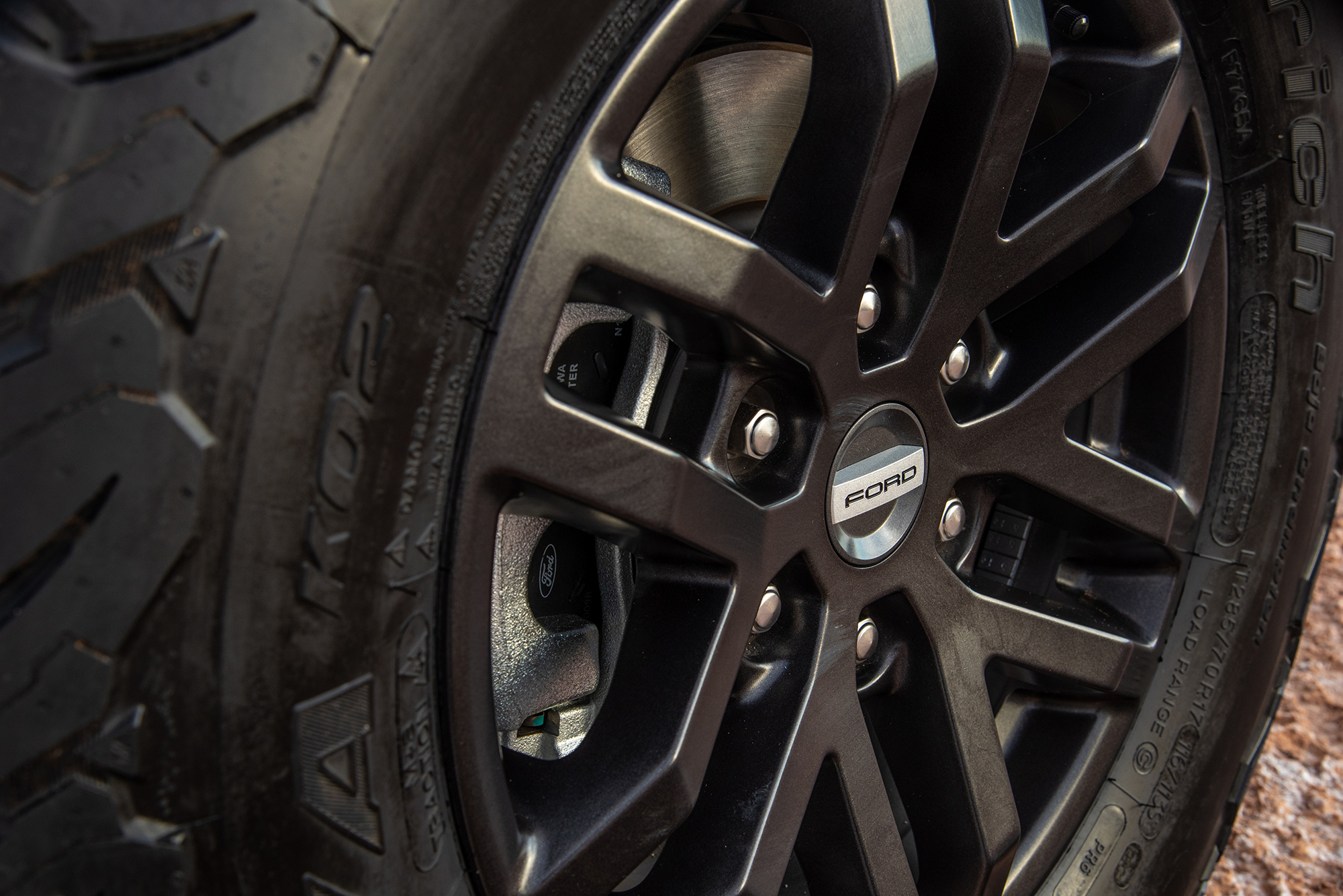 All that focus on the suspension has paid off: the damping is perfectly progressive, soaking up the rough stuff without becoming soggy, and keeping things tidy when normal bakkies would be leaning wildly.

You can leave the braking very late, turn in even later, and still see the Raptor heeding the helm’s command: It’s able to put down the power with purpose, rather than getting bogged down, or the nose ploughing into hopelessly wide understeer.

If that sounds like you need to be a racing driver to enjoy the Raptor, not so: While its talents are brought into sharp focus in extreme conditions, Ford’s combination of poise, precision and urge makes for engaging driving both on and off the road. 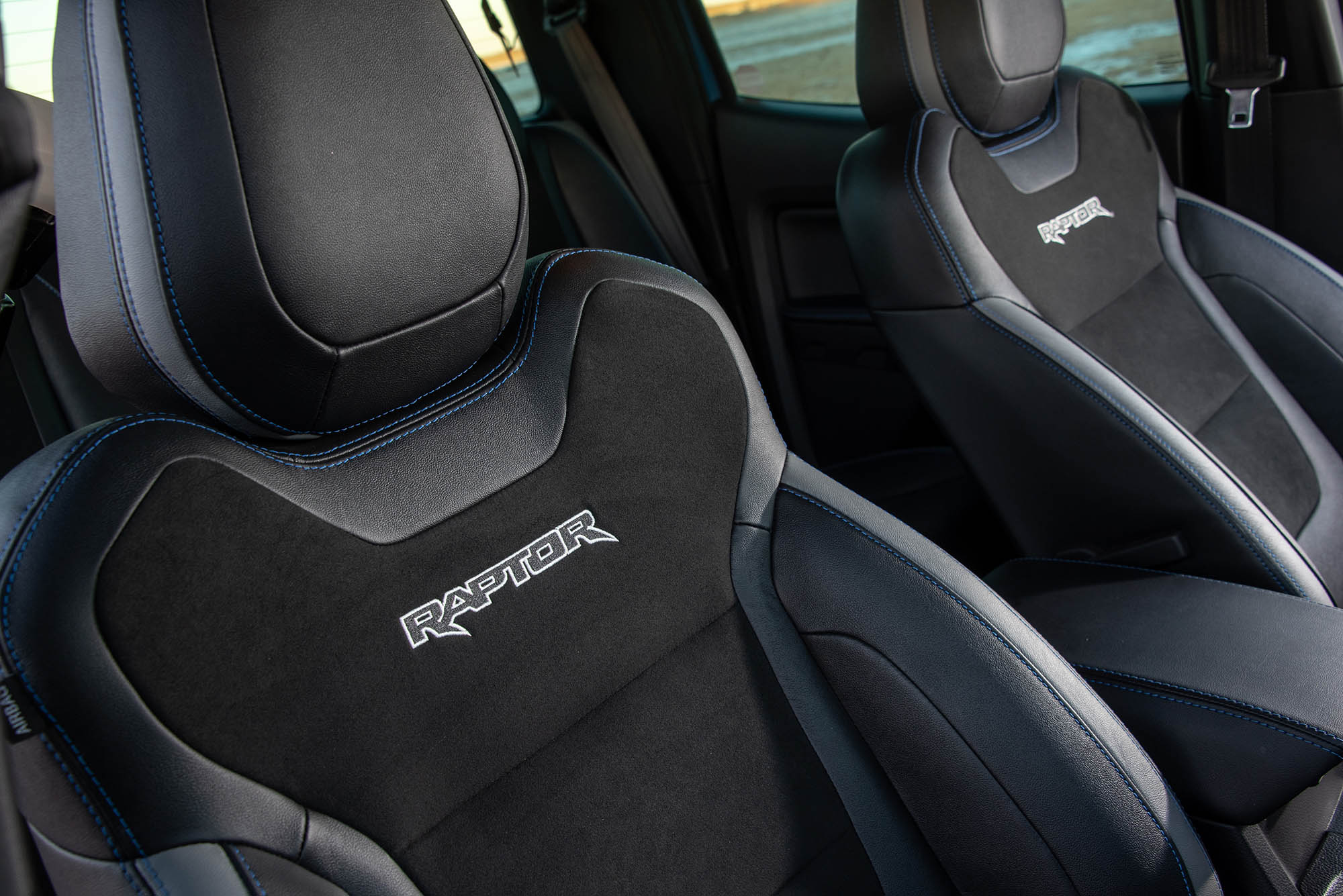 I expected those aggressively treaded tyres to be noisy and scrabbly on tar, but they were commendably well-behaved. And the ride quality is superb on paved surfaces: comfortable and cushy without becoming wafty or vague.

Nor do you have to go fast to benefit from the Raptor’s capabilities. The notoriously soft Kalahari sand of the dunes surrounding the pan posed an altogether different challenge.

The route traversing those dunes had its fair share of steep hills, sharp twists and off-camber slopes. And the high ambient temperatures made the going even more treacherous. 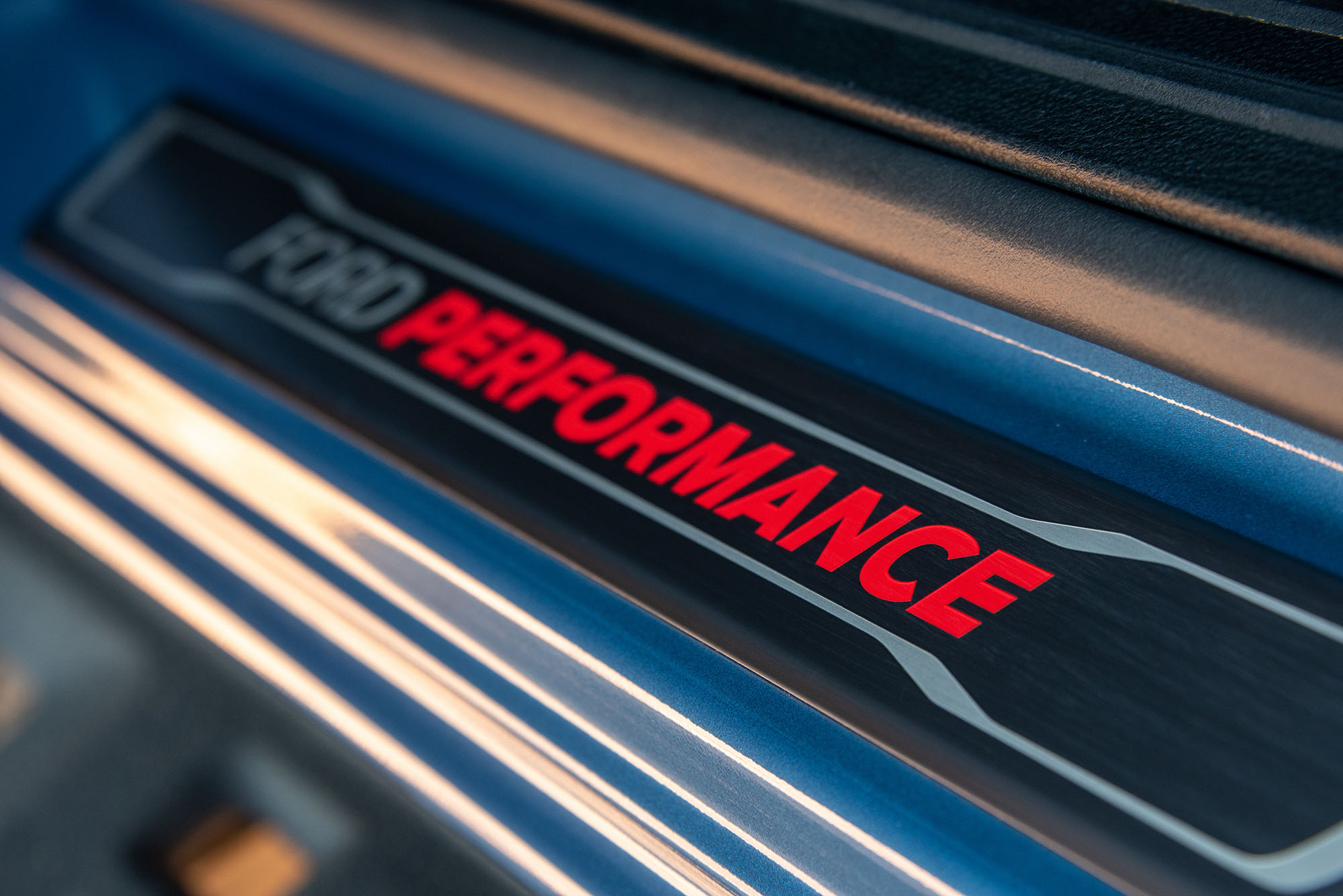 The big Ford picked its way through the route, showing off enough low-down grunt to get up the steep stuff, while the suspension remained unperturbed by the often badly churned-up track.

Any fears that the two-litre mill wouldn’t be up to the task were soon dispelled — although it has to be said that I would have liked some extra low to midrange punch when powering out of tight bends.

The four-cylinder’s twin turbos work in tandem to counter lag and smooth out the power delivery. It also has the benefit of being lighter and more compact than a V6 or even V8, which contributes to the Raptor’s inherent balance. 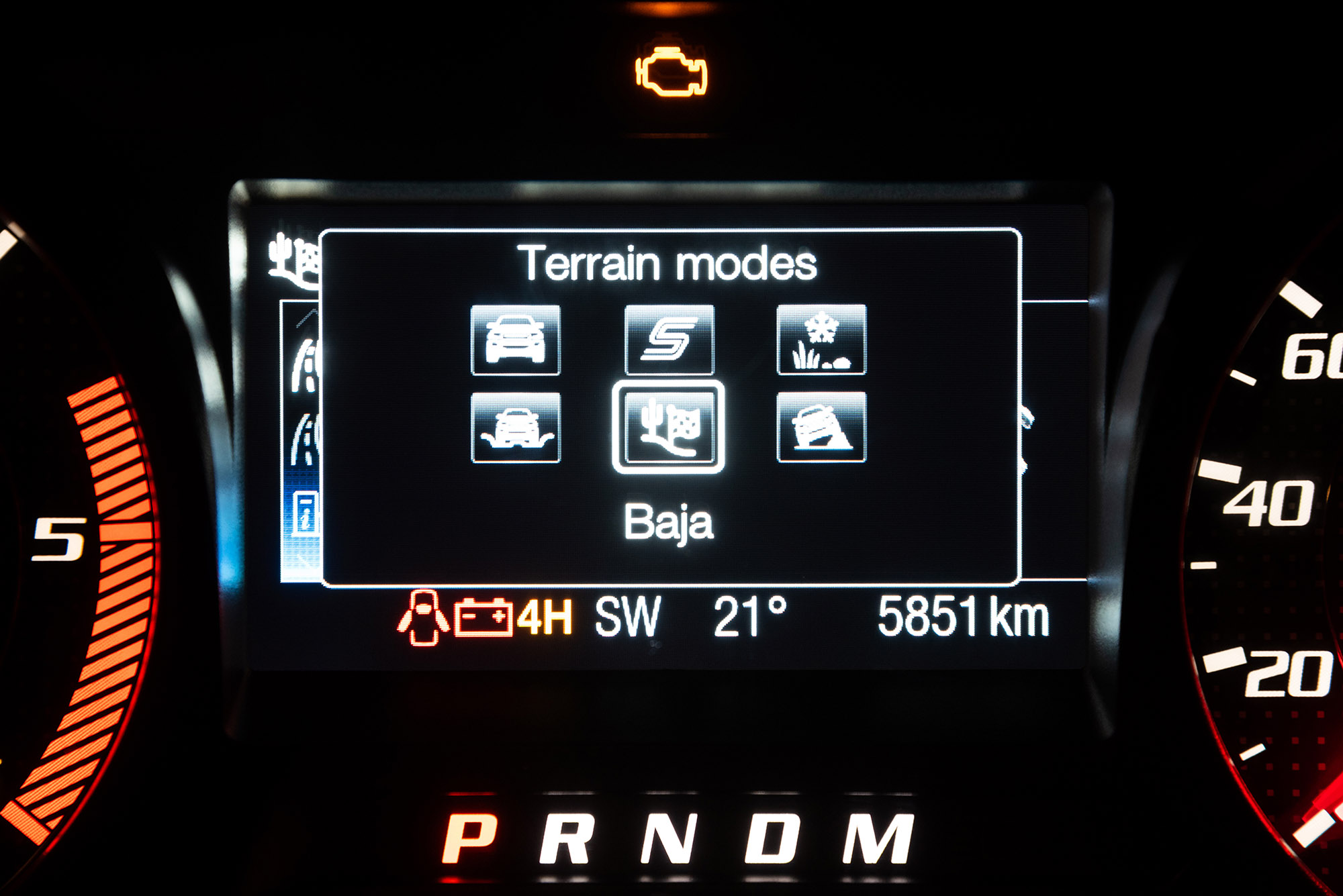 No doubt, a bigger, larger-capacity engine would have more low-down oomph, but to Ford’s credit, the power delivery is easily modulated, and without any sudden peakiness.

Further user-friendliness is ensured by a selection of driving modes, linked to stability control that can be partly or completely switched off, and a rear diff lock. Being a true 4×4, you can also select between rear-wheel and all-wheel drive, as well as invoking low-range gearing for extreme off-road conditions.

Indeed, let’s not forget that the Raptor remains very much an off-roader — even more so than the already adept Ranger 4×4. Ground clearance has been upped to 283mm, together with an 850mm wading depth, while approach and departure angles are also improved. 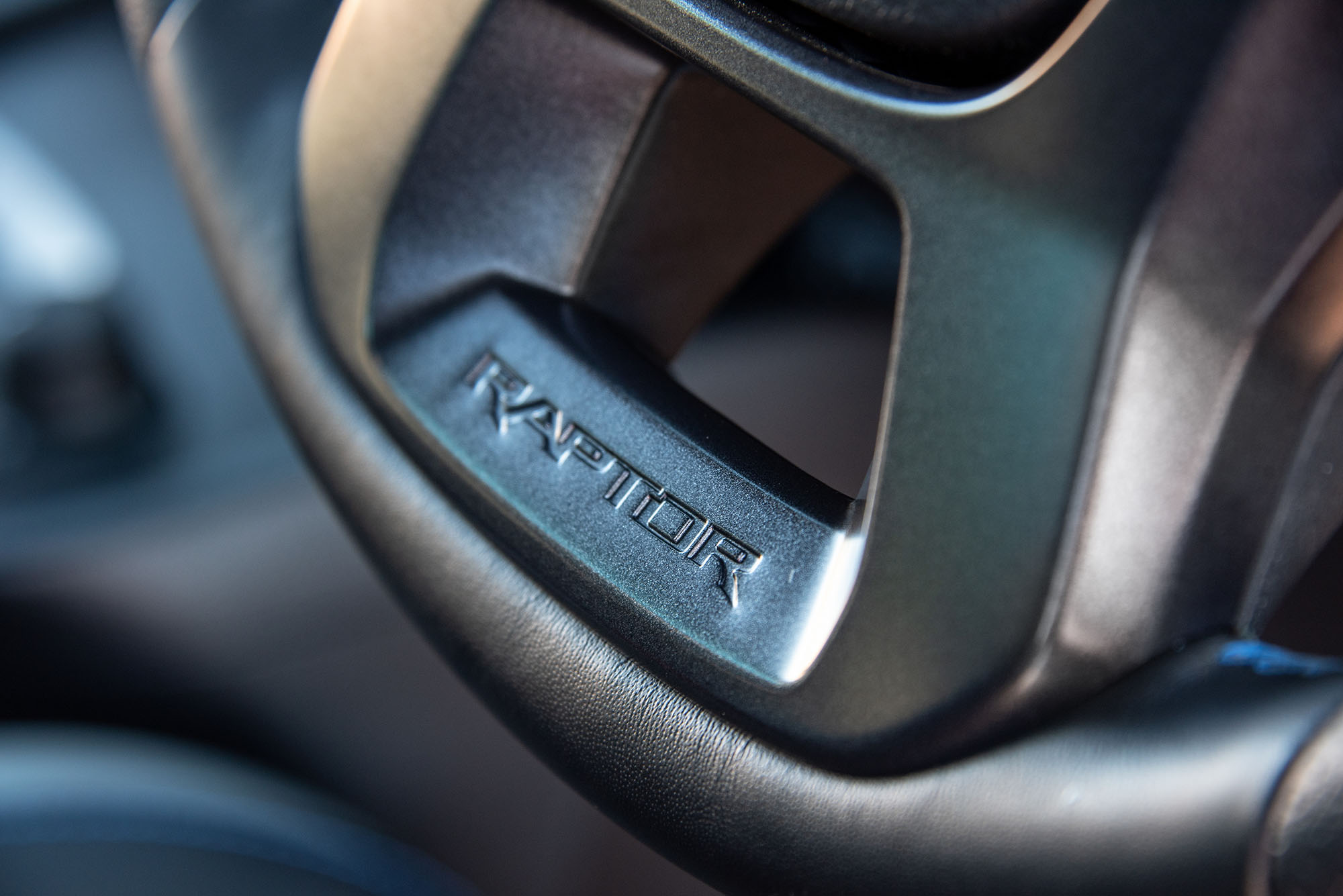 So, the Ranger Raptor will also stand its ground in the most challenging of off-road terrain, giving it a breadth of capability that is arguably the best in the hugely competitive double-cab 4×4 bakkie segment.

At R786,400, excellence doesn’t come cheap: It’s well around R108,000 dearer than a full-spec Ranger Wildtrak with the same engine. You can get a baseline Amarok V6 for less, but the Mercedes-Benz X-Class V6 costs a lot more. 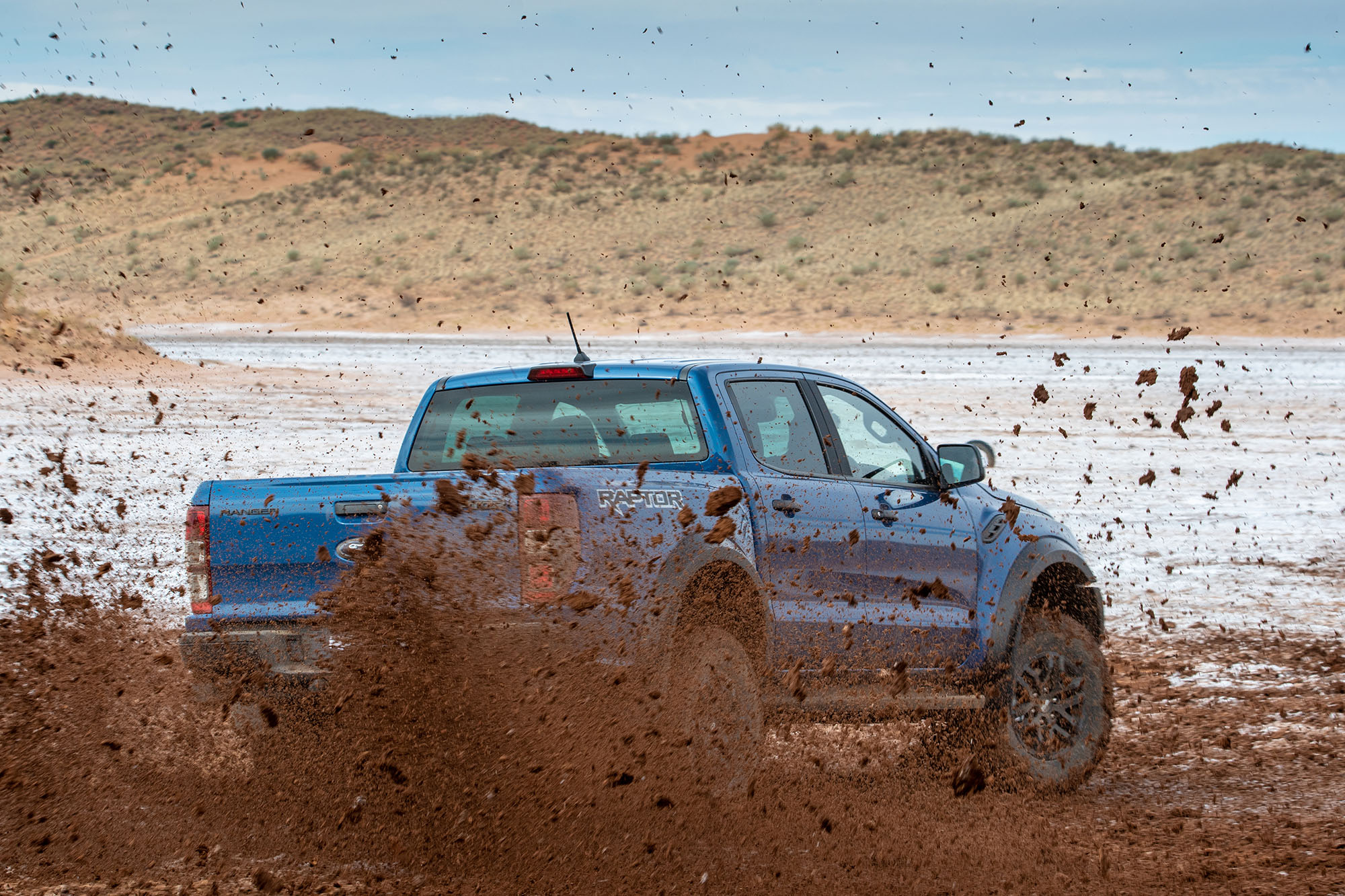 Athletic, comfortable, composed and capable, the Ford Ranger Raptor may be overtly sporty, but it’s hugely competent in almost any situation. It’s not just for boy racers or gung-ho bundu bashers, but for those who want to experience bakkie dynamics taken to a new level. DM