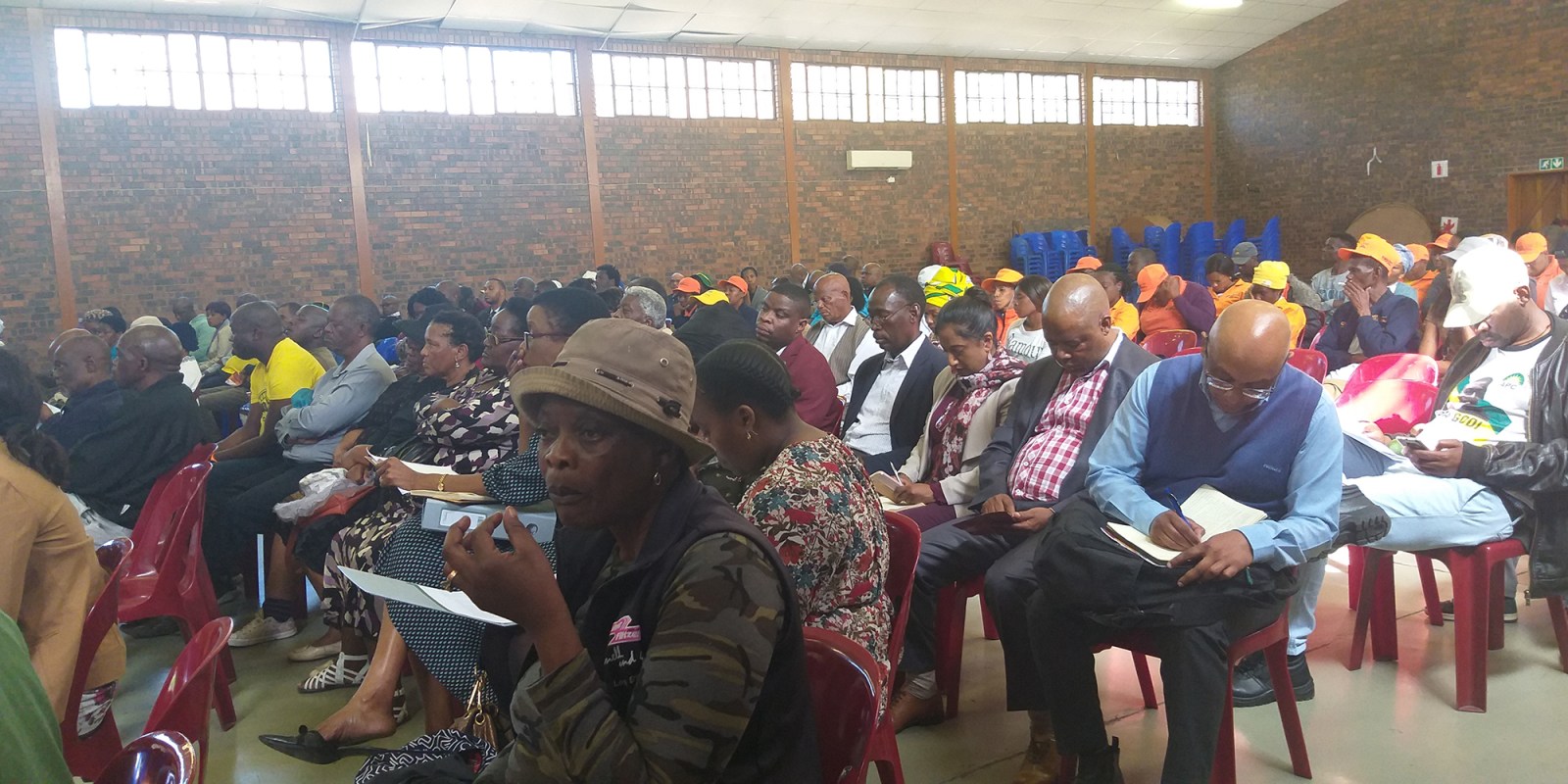 Alexandra residents at the East Bank Hall in Alexandra on Monday during the SAHRC and Public Protector's office's hearings on socio-economic challenges in the area. Photo: Bheki Simelane

Residents of the impoverished township bordering Sandton are likely to be irritated by the disclosure by human settlements officials that an election campaign promise by the president was never made. On the third day of the inquiry by the South African Human Rights Commission and the Public Protector into socio-economic ills in the area, the officials said the media misinterpreted what Cyril Ramaphosa had said.

In a startling revelation that is likely to irk many an Alexandra resident, it emerged from provincial Department of Human Settlements officials during the third day of the inquiry into socio-economic ills in Alexandra that during his visit to the township at the height of the April 2019 unrest, President Cyril Ramaphosa never promised the community of Alexandra a million houses.

This surfaced after the regional manager of the SA Human Rights Commission (HRC), Buang Jones, asked if this target, as reflected in media reports, was feasible.

“Media reports stated that the president promised Alexandra residents a million houses. Is this feasible in light of what you have said in your presentation?” asked Jones.

“There is no way that a million houses can be built in Alexandra. The president was speaking in his capacity as the ANC president,” department MEC Dikgang Uhuru Moiloa said. Media reports to this effect were wrong, he said.

Jones then wanted to know from the officials if all the media reports on the issue had been wrong.

Saving the MEC from this line of questioning was human settlements head of department Daniel Molokomme. He said even the media house that reported on the million-houses announcement had admitted that errors of interpretation had been made in its newsroom.

“It was written out of context,” Molokomme said.

The announcement raised many eyebrows, because judging by the government’s pace of delivery, a million houses did not seem a feasible target.

In the department’s presentation, Moiloa asked the commission to go deeper into its investigations because of the complexity of the issues involved, among them complications resulting from an influx of legal and illegal migrants and refugees. He asked the commission to take cognisance of the huge burden on the department as a result of the influx.

The inquiry is investigating socio-economic issues in Alexandra, their impact on fundamental rights and whether they amount to maladministration, abuse of power, corruption and improper conduct. The HRC is being assisted in the probe by the Office of the Public Protector.

Alexandra Fitzgerald, senior legal officer at the HRC, asked officials about the unavailability of recent provincial annual reports, especially those from previous years dating back to 2015. The officials said they had such reports and would present them at the next sitting of the commission.

Fitzgerald asked the department to make the reports public.

Fitzgerald also asked MEC Moiloa about vacant positions in the department and whether these were affecting service delivery. Moiloa conceded that this was the case.

“The department needs stability in administration. We would have been able to resolve matters that had been sitting there for a long time.

“I would not have made appointments because my preoccupation was spending the budget. There is a need for consistent leadership both politically and administratively in order to properly address the social ills, so yes, it would have had an effect on service delivery,” Moiloa said.

As he prepares to leave the department having finished his term under trying political and financial times, Moiloa called for sufficient investment in infrastructure which, he said, would enable broad-based development.

Moiloa said the government had planned 36 mega human settlements in Gauteng, adding each would not yield fewer than 10,000 houses.

Fitzgerald asked the department to contextualise the proliferation of land invasions in the area in 2016, and how this affected the provision of services.

“We have doubled in population. Planning is informed by population, but increased migration impacts on the infrastructure we have. The level of service is affected. Our plan is that we will deliver mega projects which are also dependent on bulk infrastructure, which is very key,” Molokomme responded.

Fitzgerald asked the officials who else they thought should appear before the commission, to which Moiloa said the Minister of Co-operative Governance and Traditional Affairs (Cogta), Zweli Mkhize, should appear.

“I think for me it’s critical for the minister of Cogta to appear before the commission. There are also political parties who I will not mention by name, who agitate random illegal occupations of land. They tell citizens to occupy land wherever they want. I consider that kind of call to be an abuse of human rights,” Moiloa said, adding that the upshot was that people had to settle in remote areas where government services were inaccessible.

“You know who I’m talking about. They send people to live in conditions far worse than where they are ‘waiting’ for government services. Bring them there so that they can justify their calls for land grabs,” Moiloa said.

Jones said the commission would extend an invitation to the Economic Freedom Fighters (EFF) to appear before it and account for its statements.

HRC senior legal officer Mathew du Plessis asked if by-laws were enforced more swiftly in Sandton than in Alexandra: “How severe is your observation of by-laws in Alexandra?”

“I seriously get agitated by the poor enforcement of by-laws.”

Neville Chainee, the deputy director-general of housing, told the inquiry that the violation of by-laws came at a huge cost to the government.

“Funds have to be diverted to combat this,” he said.

Vusumuzi Dlamini, senior investigator in the Office of the Public Protector, told the inquiry that, in line with the mandate of the office, his line of questioning would address maladministration, improper conduct and corruption.

“Are we on the same page regarding the disputed figure of R1.3-billion?” asked Dlamini.

Molokomme requested more time to compile a detailed costs measure and is expected to furnish the hearing with the figures at the next sitting.

Jones further asked for details of projects undertaken in Alexandra since 2001, when the disputed R1.3-billion is said to have been allocated. Again, the department could not readily furnish the hearing with details and said the Auditor-General’s report would provide more clarity.

Dlamini asked department officials to outline the summary of the findings of the Auditor-General.

Molokomme said the findings were strictly on the use of human settlements grants, which were allocated for specific purposes. He said in the Auditor-General’s language, diverting this money to other causes amounted to irregular expenditure.

Ngcobo pointed out that the Auditor-General’s report did not look at only Alexandra, but also at other areas such as Bekkersdal.

Asked if anyone had been held responsible for the irregular expenditure, Molokomme said the report that would shed some light on the issue was not readily available.

Obviously still not satisfied by the response regarding the Alexandra Renewal Project and the missing R1.3-billion, Dlamini asked officials how the issue of illegal immigrants prevented them from delivering services to the Alexandra community.

No concrete answer was forthcoming. The inquiry will reconvene from 4 to 7 July. DM