On the Cape Flats, voters have turned to small parties in significant numbers 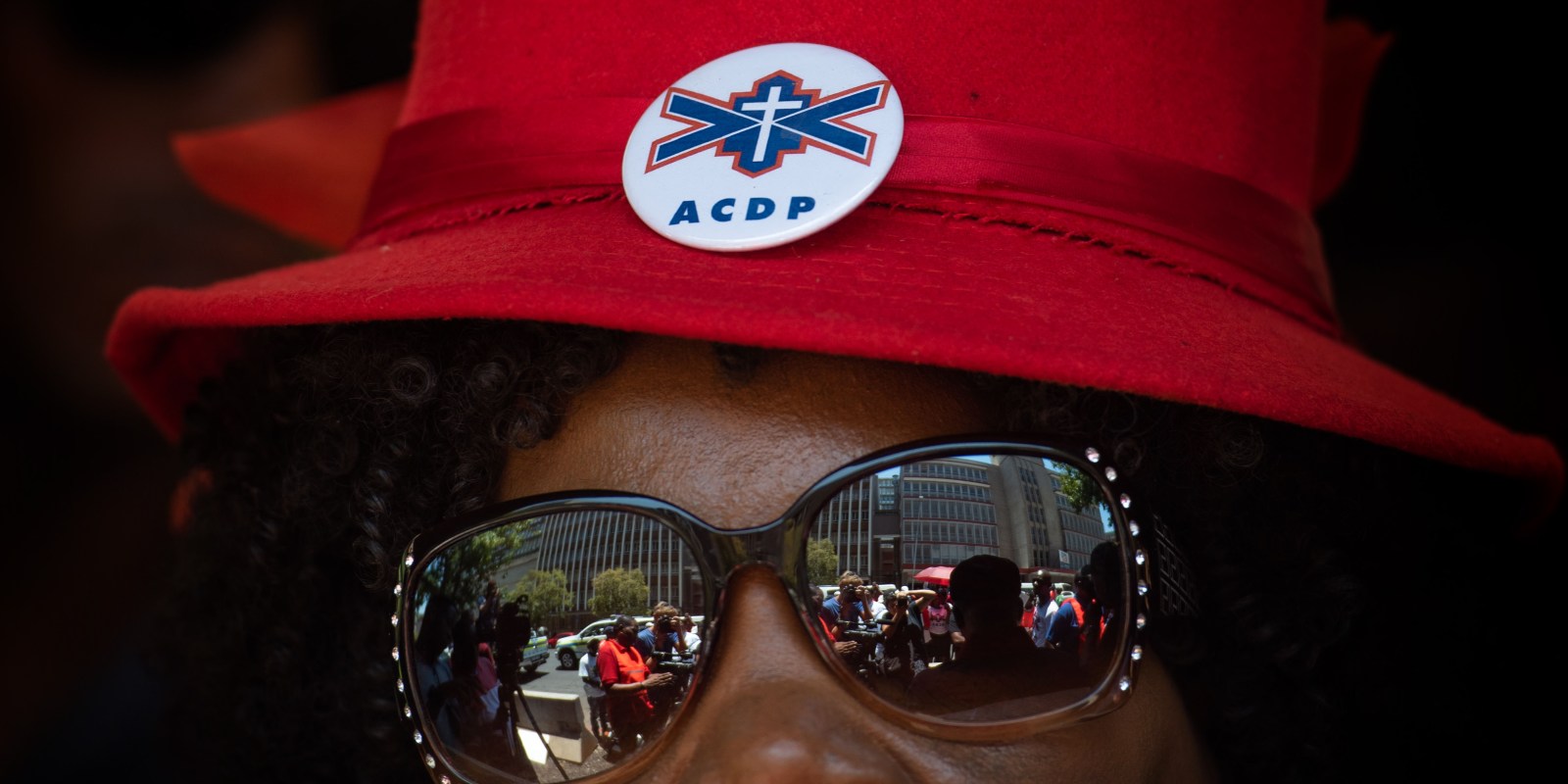 Rev. Kenneth Meshoe, the president of the African Christian Democratic Party leads a march from Burgerspark in Sunnyside to the UN offices on January 24, 2019 in Pretoria, South Africa. (Photo by Gallo Images / Alet Pretorius)

The Western Cape is the only South African province which has the first-hand experience of both ANC and DA governance. Voting results from the Cape Flats suggest increasing disenchantment with both options — but a significant rate of growth for small religious parties and even the Freedom Front Plus.

Every election season, the economically and socially deprived area of the Cape Flats suddenly finds itself a key stop on every politician’s campaign tour.

In the Western Cape, the so-called “coloured vote” is key to the electoral outcomes of the province. It remains the only South African province in which black African people do not make up the racial majority of the population. It is impossible to perform well at the Western Cape polls without winning the support of coloured voters — a reality perhaps best illustrated by the decision taken by the Freedom Front Plus to draft in controversial politician Peter Marais as the party’s 2019 provincial premier candidate.

Although the 2019 election results from the Cape Flats delivered the most votes for the DA, followed by the ANC, there are signs that the political landscape in this region is shifting in interesting ways.

Election data collated by the Foundation for Human Rights’ Zaid Kimmie of two of the largest areas in the Cape Flats show massive growth for two religious parties — the African Christian Democratic Party (ACDP) and the Muslim Al-Jama’ah party — while Patricia de Lille’s new venture, Good, succeeded in slicing thousands of votes off the DA after her acrimonious departure from that party.

Perhaps most surprisingly, the FF Plus — often associated exclusively with white Afrikaans voters — also grew significantly in the Cape Flats, albeit off a low base.

The area of Mitchells Plain — defined as a “Main Place” in the Stats SA 2011 census — encompasses suburbs such as Lentegeur, Rocklands, Strandfontein and Mitchells Plain proper, with a population of whom just more than 90% were classified as coloured in the last census.

The collected results of the 50 voting districts in this area show that although the DA received a comfortable majority of 71.4% in the national poll, its support dropped by 22.2% off the 2014 results.

The DA’s closest contender in Mitchell’s Plain was the ANC, which also experienced a decline of 1.78% from its 2014 national vote share.

The Mitchells Plain voters who turned away from the DA and the ANC this election nationally gave their vote instead largely to the ACDP, GOOD and Al-Jama’ah.

With Good leader Patricia de Lille considered to be a Cape Flats favourite, the new party’s 5.3% share of the Mitchell’s Plain vote may be lower than hoped. Good’s Brett Herron — who is headed to the Western Cape provincial legislature — told Daily Maverick that he couldn’t comment on the Cape Flats results until party data-crunchers had finished analysing the voting results.

“Initial analysis indicates our support was widely spread across the metro and province,” Herron said.

The ACDP delivered stronger results than Good in Mitchell’s Plain, taking home 6.2% of the national vote. Of significance here was the ACDP’s staggering growth since 2014, surging by 245%.

Muslim counterparts Al-Jama’ah also had a strong showing in this area, with 3.6% of the national vote.

Although the EFF grew here by 62% from its 2014 results, its growth has been radically outpaced by the religious parties and points to the Fighters’ ongoing difficulty in obtaining a foothold on the Cape Flats.

The EFF’s growth was also eclipsed by that of the FF Plus, which increased its 2014 vote share in the area by 117% off an admittedly minuscule base of just 95 votes.

Comparable results were delivered from the 20 voting districts which make up the Grassy Park “Main Place”, an area which includes suburbs like Grassy Park itself, Lotus River and Parkwood.

The last census classifies 87.41% of its residents as coloured.

In Grassy Park the DA again registered a comfortable majority on the national ballot (68.3%), but with an identical 22.2% drop off its 2014 results.

Good did slightly better percentage-wise in the Grassy Park area than in Mitchell’s Plain, winning 6%, but De Lille’s party had Al-Jama’ah nipping at its heels with 4.3%.

Growth for the EFF again remained low at 44% from 2014, as compared with the 161% growth of the FF Plus, but the Fighters still finished ahead of the FF Plus.

The suburb of Parkwood, within the Grassy Park area, is of interest because it has been the site of violent protests over housing and land in the year leading up to the 2019 polls.

Daily Maverick’s analysis of results delivered from two Parkwood voting stations shows higher growth for the EFF on the national ballot than the Grassy Park average, but the majority of voters still opted — albeit in decreased numbers — for the DA.

“The vast majority of our whole province’s corps of volunteers, members and structures are on the Cape Flats,” Haskin said.

He said the party’s biggest election day presence was at Cape Flats voting stations, adding that the party had stepped up its campaigning in the area following the DA’s messages to voters that a vote for a small party like the ACDP was a wasted vote.

“Most of our members there are under 40 years old,” Haskin said.

“We targeted church leaders and youth leaders in particular. Our nerve centre was staffed and run by youth volunteers. Our campaign spoke to the youth in particular. So they are our foundation for 2021 and 2024.”

“This can be attributed in part to a drop in turnout of DA supporters on election day. In addition, we perhaps have not communicated both our successes and programmes of action in government — both locally and provincially — enough.”

He added that an “extensive review” would follow “to interrogate these matters thoroughly”. DM