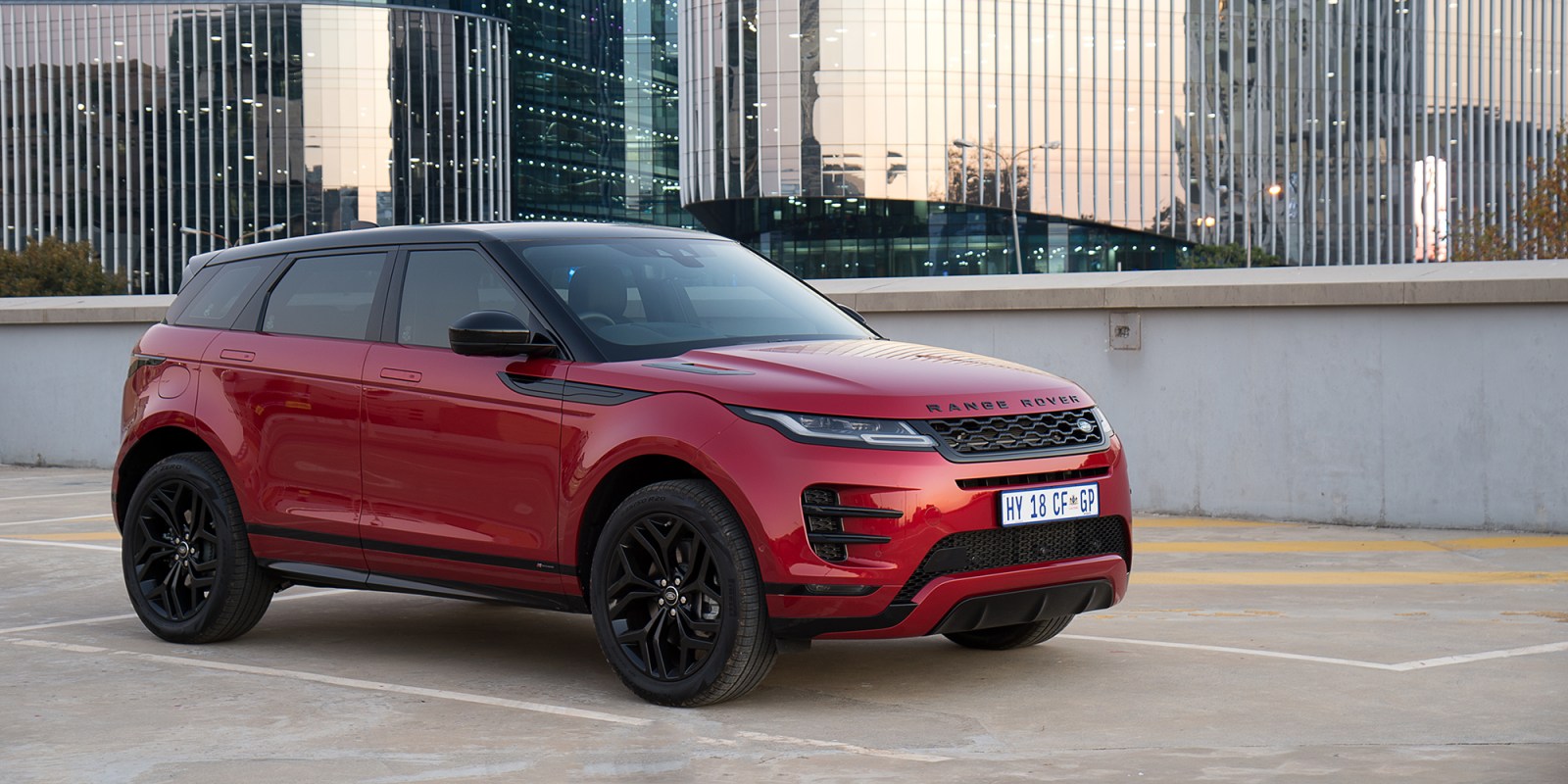 The all-new Range Rover Evoque is unrepentantly urban – a compact, street-savvy SUV with enough design dazzle to keep the fashionistas fawning. But it’s also a high-tech whizz kid – and for those who dare, it can roll up its sleeves and tackle the gritty stuff, too.

The ramp is so steep that all you see ahead as you grind your way up the incline is a black, velvety sky. It’s after dark on a clear autumn Jozi evening, and spotting the Southern Cross through the windscreen is more than a little disconcerting. 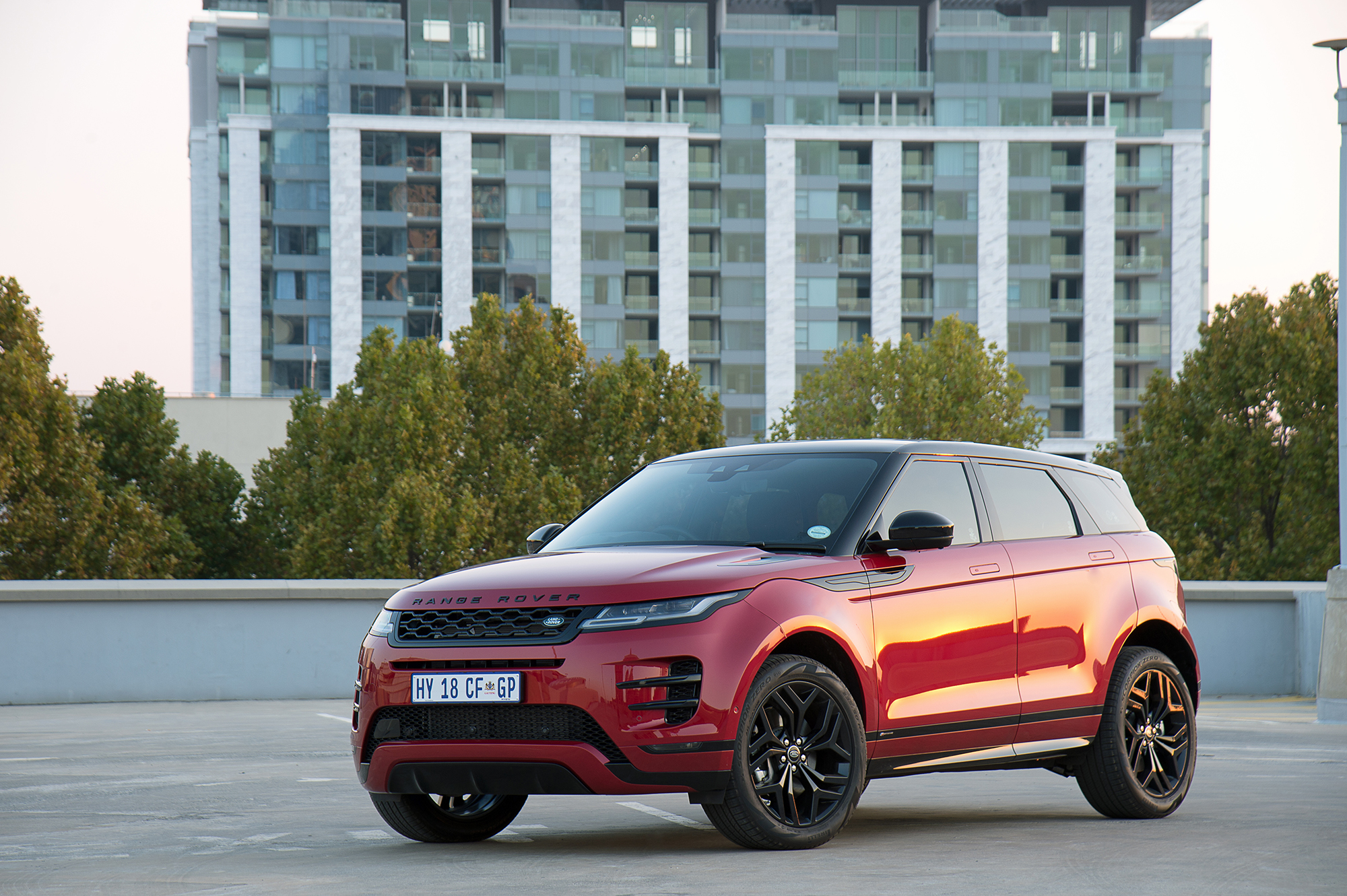 Even more unsettling is that the ramp isn’t just steep and high, but narrow: too much to the left or right and things could turn decidedly, ahem, uncomfortable…

Fortunately, we have a beaming instructor with light batons to direct us. In the gloom, he looks more Darth Vader than Han Solo, but we trust him nonetheless – and before we know it, we’ve crested the hill and survived the challenge.

Off-roading requires skill, a good co-driver/guide – and some competent 4×4 hardware. To be fair, our steed may be fancy and sexy rolled into one, but it doesn’t look the dinkum, dyed-in-the-wool off-roader part.

This is the all-new Range Rover Evoque, arriving eight years after the first-generation model broke new ground by becoming the world’s first design-focussed urban SUV. Back then, it seemed to represent a radical departure from the SUV norm – but 770,000 global sales later, the Evoque is now very much on solid ground. 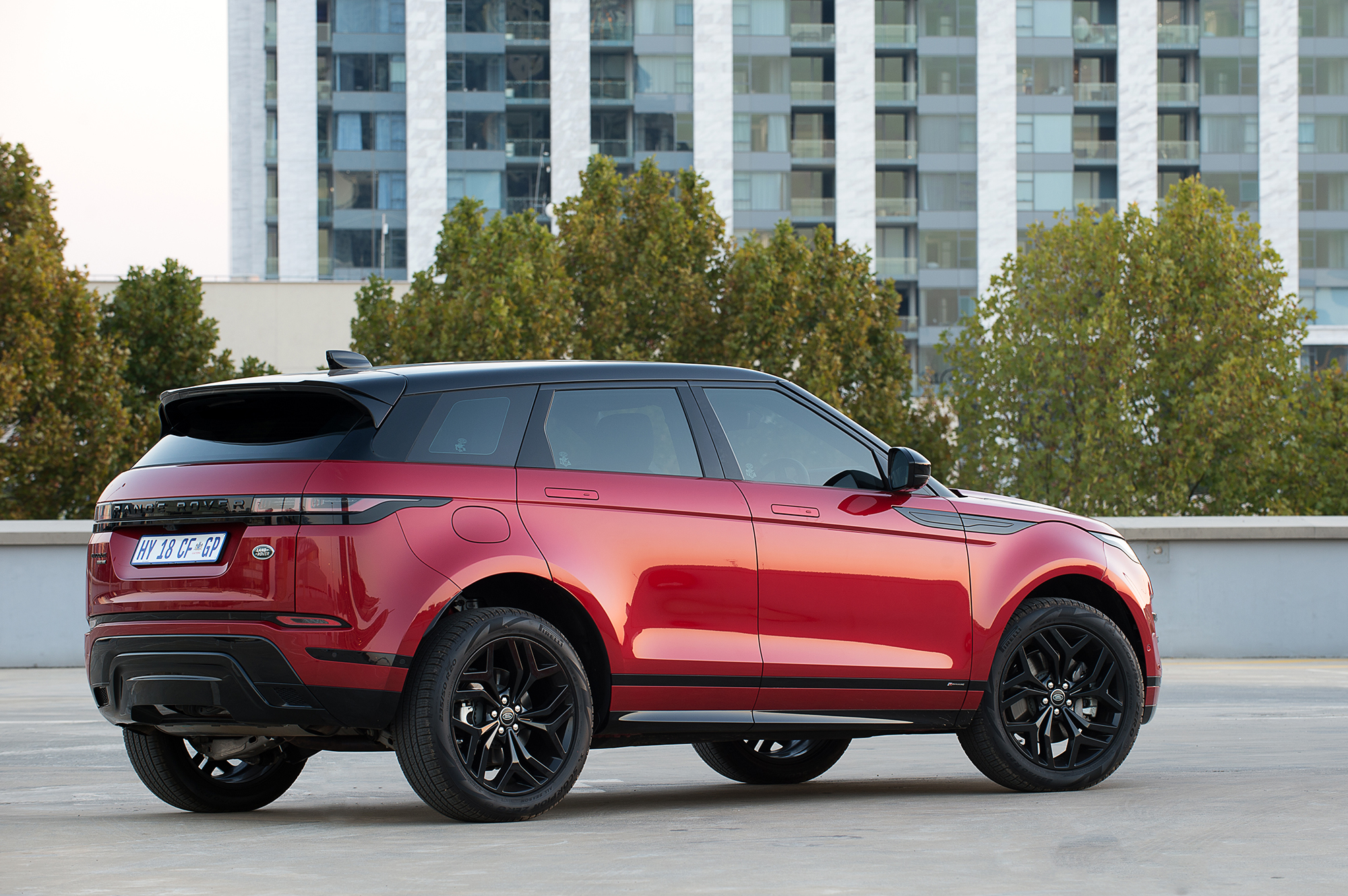 From afar, the shape and execution are almost too familiar for a completely new model. The wedged waistline, narrow side glass and tapering roofline have all been retained, and the dimensions are much the same, too.

It’s gained some bulk and visual muscle, though: this Evoque looks chunkier, as if its designers wanted to place a stronger emphasis on its SUV persona. That’s not a bad thing: the styling is more succinct, and the result more confident. 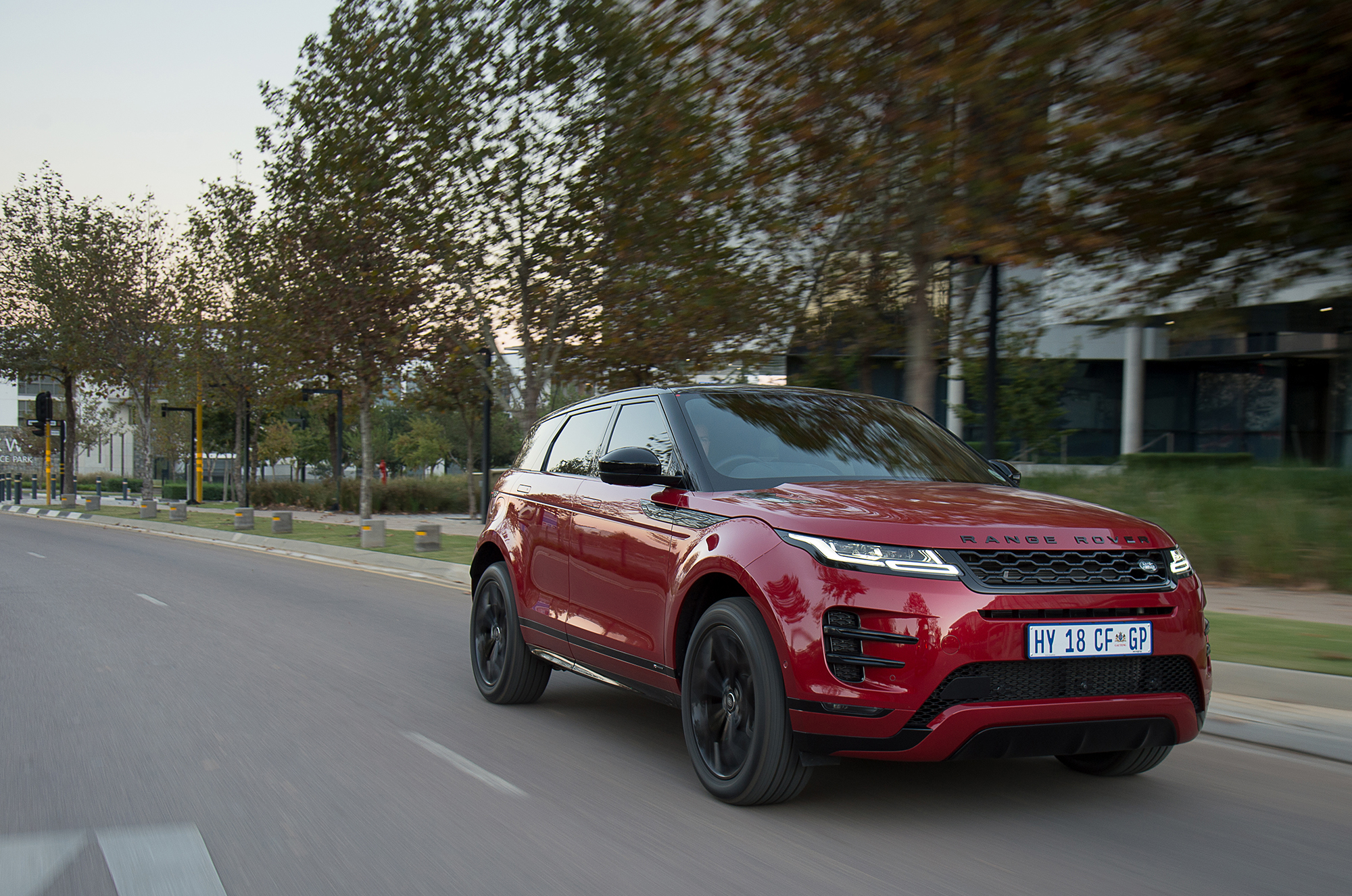 Those changes are mirrored at the rear: narrower, more elegant LED taillight clusters, and a near-vertical tailgate culminating in a bold rear apron endowed with a curved scuff panel.

The wheel arches are more emphatically flared, too, inviting the use of larger wheels: anything from 18-inch to 21-inch rims can be accommodated.

The interior has become sleeker and more minimalist, with a greater emphasis on smooth, uncluttered surfaces and unencumbered space. As you’d expect of a Range Rover product, the execution is fastidious and luxury-driven. 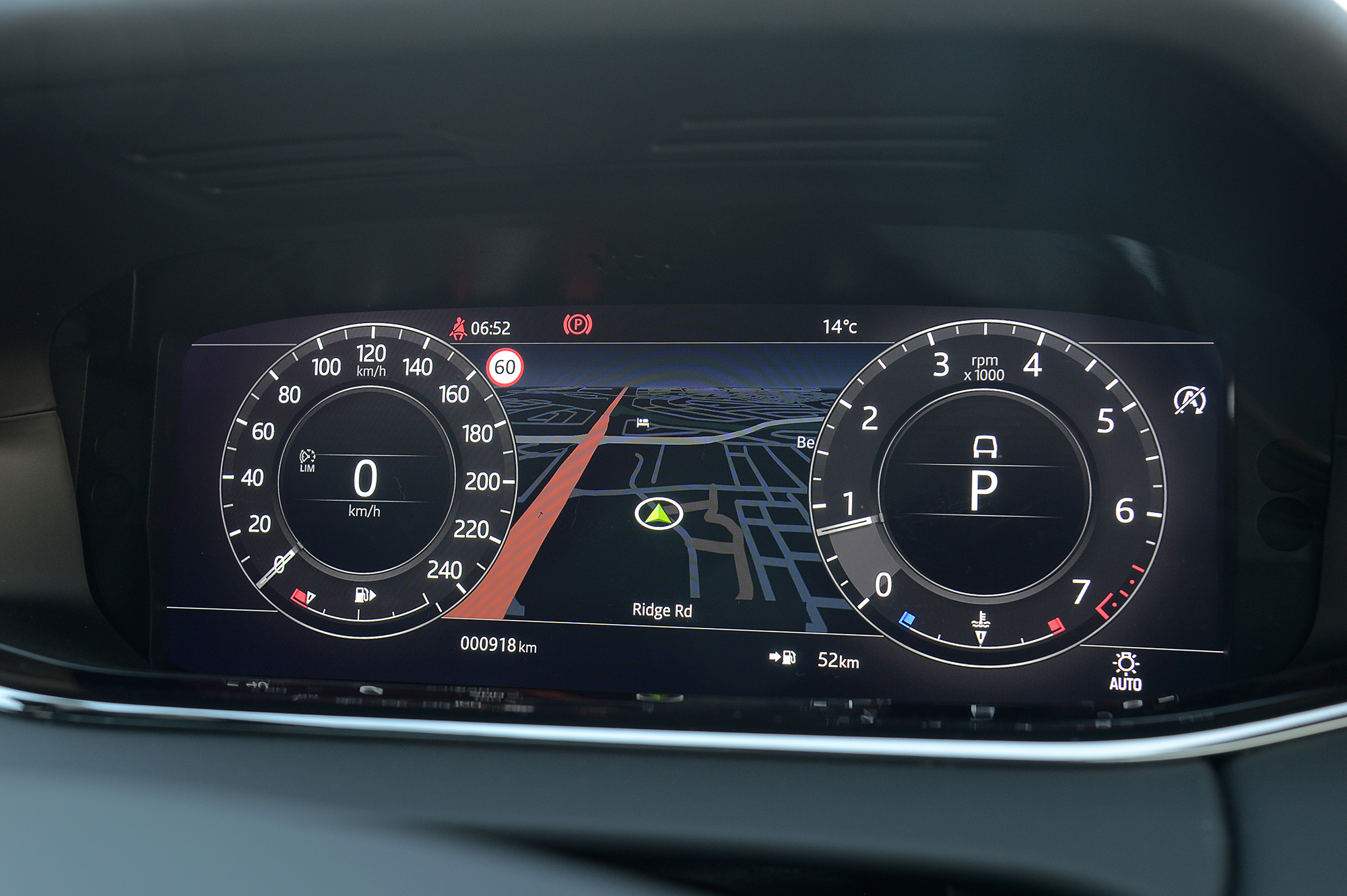 That said, the Evoque has become more eco-conscious: instead of ubiquitous hide upholstery, you can opt for a greener mix of wool and natural textiles, or even a suede material fashioned from recycled plastic bottles.

The launch fleet cars were endowed with more traditional leather, and my guess is that all but the most adventurous of SA Evoque buyers will still prefer that execution to any of those new-fangled options.

The cockpit has been transformed into a high-tech command centre. The instrument cluster is a crisply resolved, all-digital affair, while the centre stack is dominated by a pair of high-res touchscreens arranged one above the other. 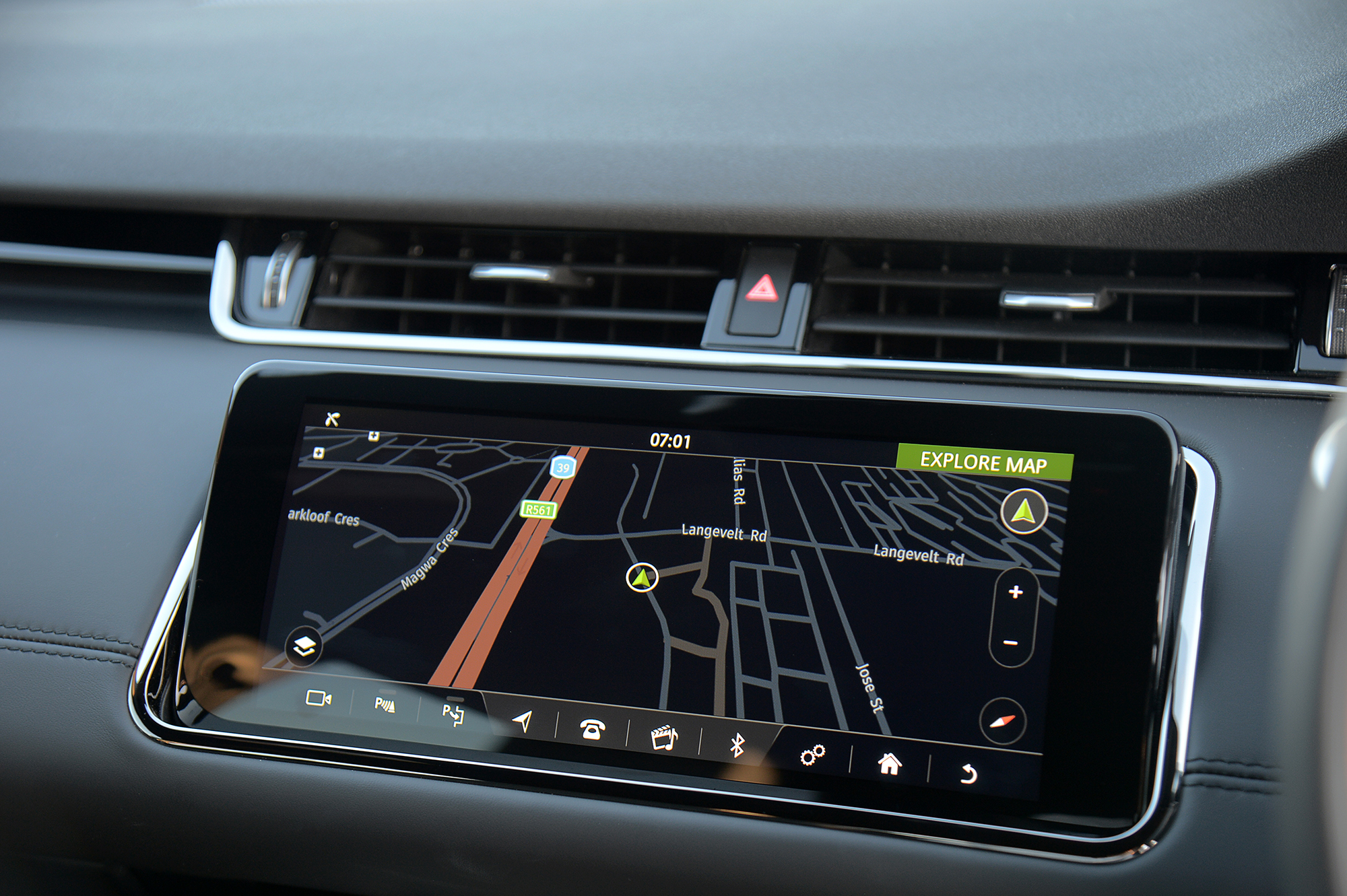 The effect is almost overwhelming: combined, all those screens deliver a visual feast of icons and virtual controls that isn’t exactly intuitive at first glance, and requires some getting used to before navigating your way through them becomes more intuitive.

The tech doesn’t end there, though: the rear-view mirror can be switched to HD video mode if the actual mirror view is obscured by poor weather, a dirty rear screen or an interior loaded to the roof. 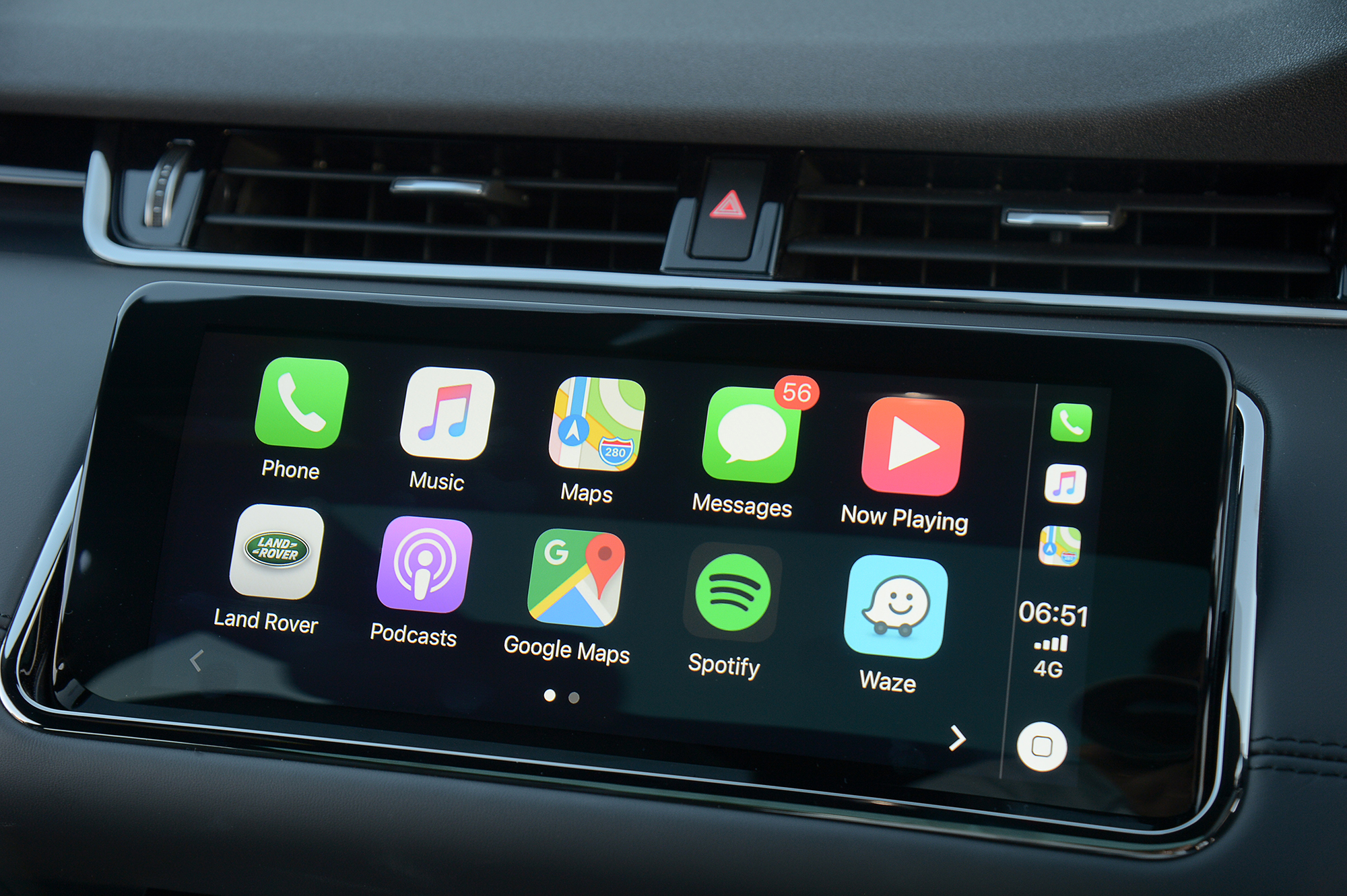 A roof-mounted camera takes over, and provides a widescreen view of what’s happening behind the car. The resulting image is impressively clear, even in the dark, but it tends to be distracting at first.

Then there’s what Land Rover calls ClearSight Ground View, which uses front and side cameras to project an image of what’s happening ahead and underneath the Evoque onto the centre-console touchscreen.

That’s not only extremely useful in an off-road context, but also prevents nicking kerbs, and helps when manoeuvring the Evoque into tight parking spaces. 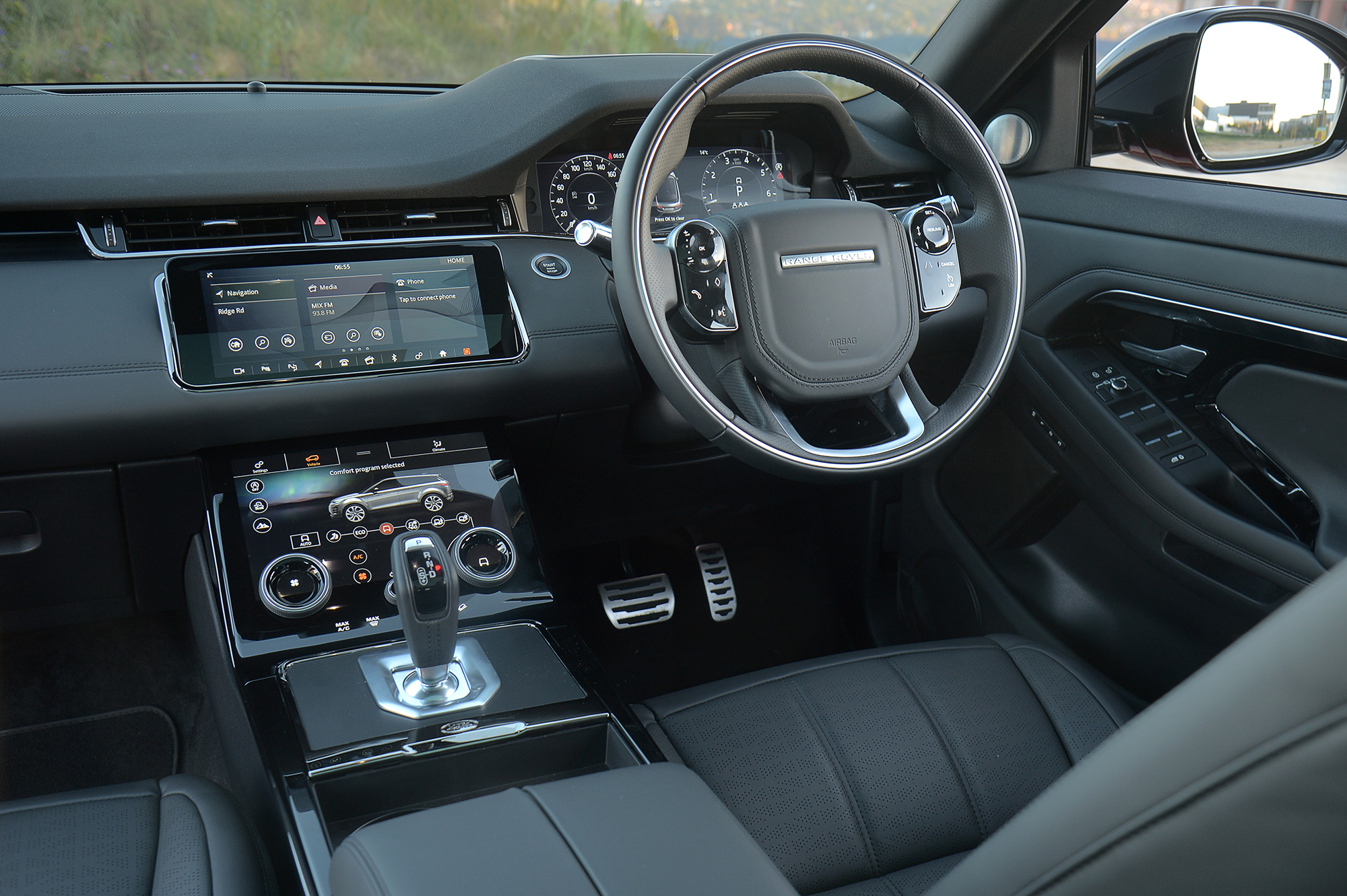 Evoque anoraks will notice that the “little” Range Rover’s wheelbase has grown by 21mm, of which 20mm is applied to improving rear legroom. Overall packaging is much improved, thanks to an all-new, modular platform that’s significantly stiffer.

There are improvements in terms of cargo space, too: boot space has grown by 10 percent to 591 litres, and there are a lot of nooks, crannies and cubbies to stow tablets, mobile phones, takeaway chai lattés and more. 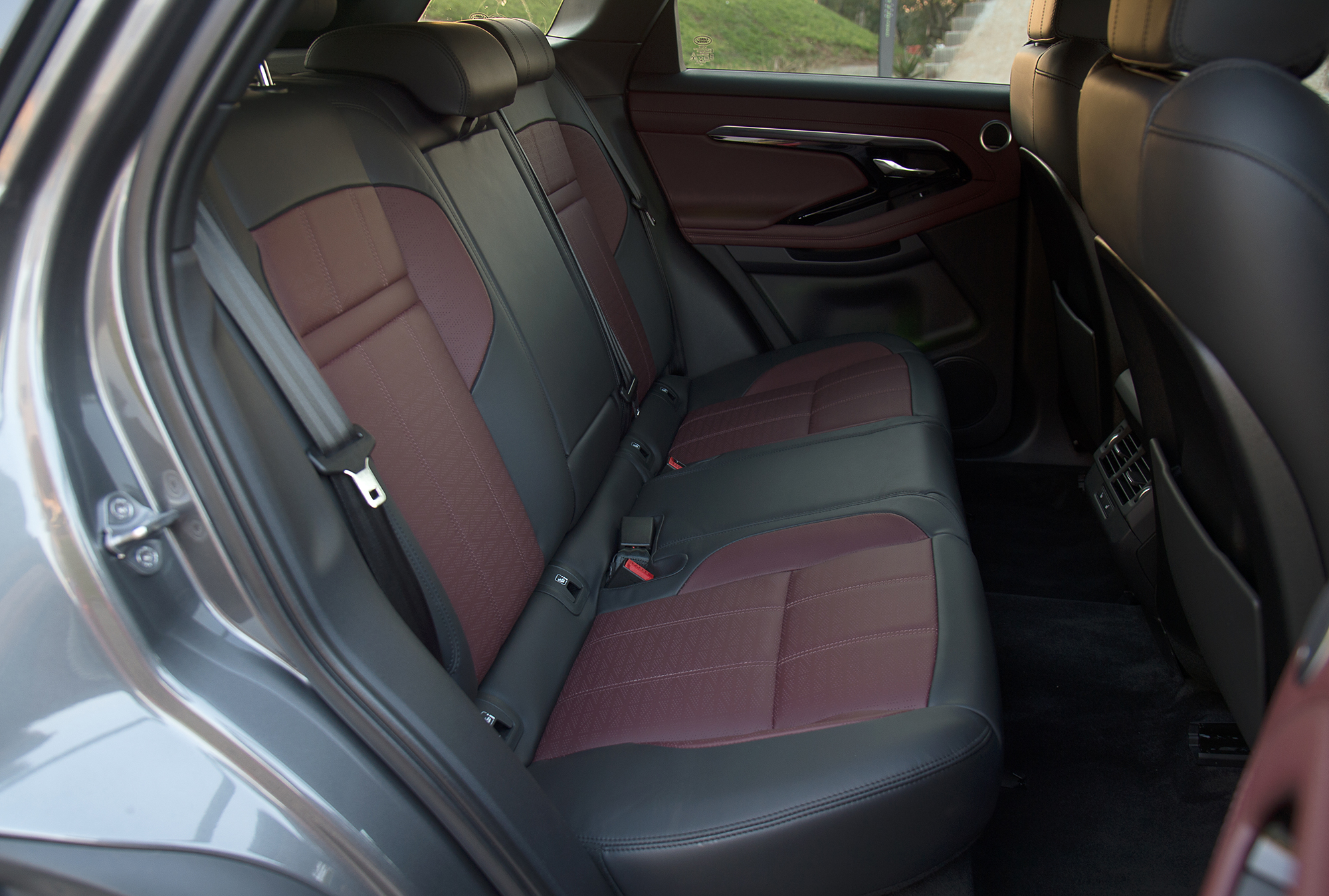 One tends to think of the Evoque as a fashionista 4×4 – a for-show SUV that may be an all-terrainer in name, but is unlikely to see anything more serious than game lodge gravel or polo field turf.

However, Evoque II comes with all-wheel drive and Land Rover’s do-it-all Terrain Response 2 system, as well as gung-ho credentials such as a 212mm ground clearance, and a maximum wading depth of 60cm.

Which brings us back to our little after-dark escapade on the Land Rover Experience Centre’s off-road track in Lonehill, Johannesburg. Guided by instructors flourishing glow-sticks like light sabres, we negotiated water troughs, steep gradients, side slopes and axle-articulating boulders. 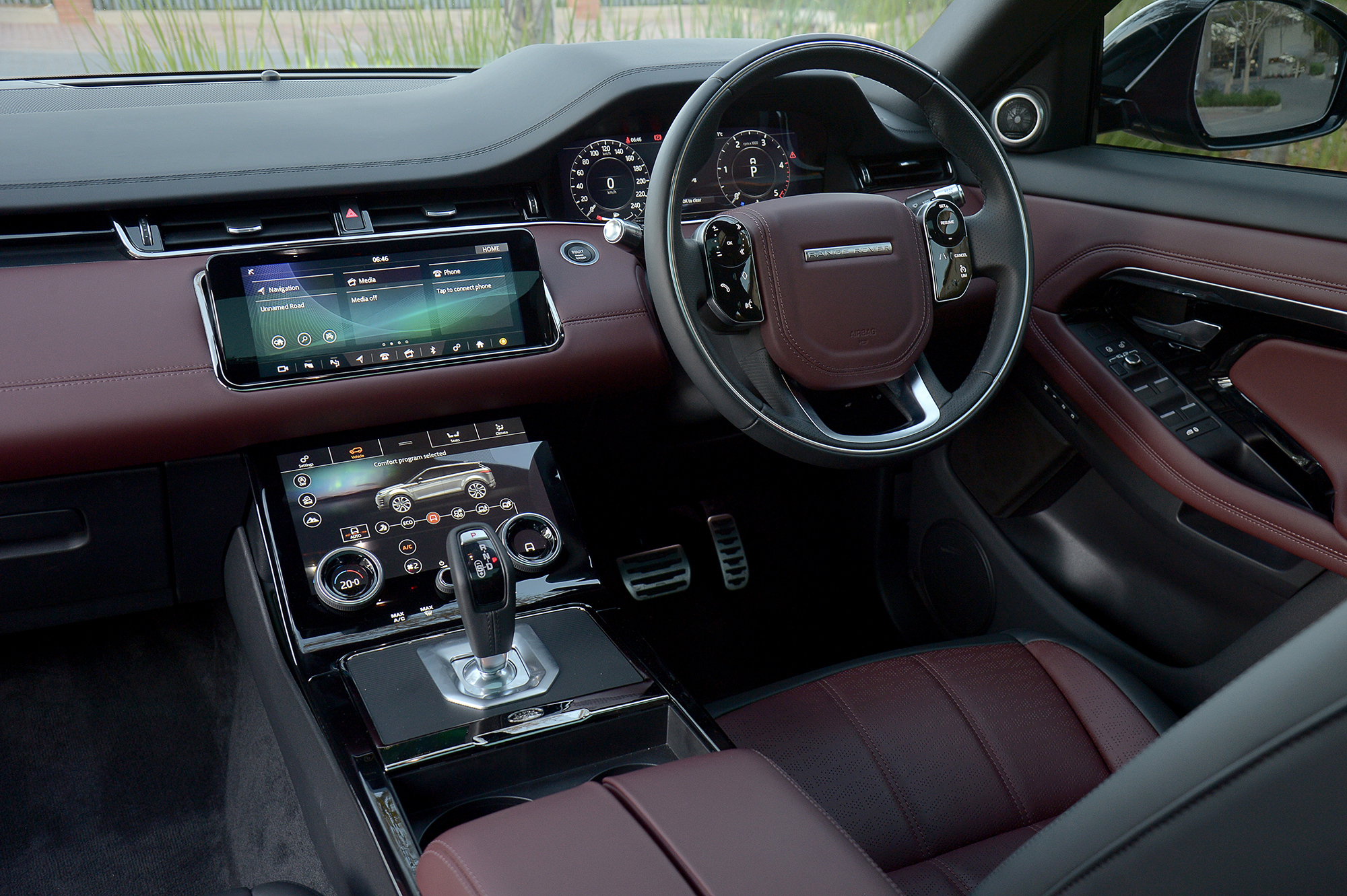 And while the new Evoque has ultra-bright, latest-generation LED Matrix headlights, we drove without their assistance, relying on the rather more modest glow of the daytime running lights, and the instructions of our guides.

The Evoque passed every all-terrain test with flying colours. Admittedly, the track was laid out specifically for the vehicle, and real-world conditions are never as cut-and-dried, but it did demonstrate that the newcomer has earned its Range Rover badge.

Even so, the reality is that very few Evoque owners will dare to – or want to – tackle the rough stuff. In image terms, the Evoque remains resolutely urban and upmarket in appeal and application. 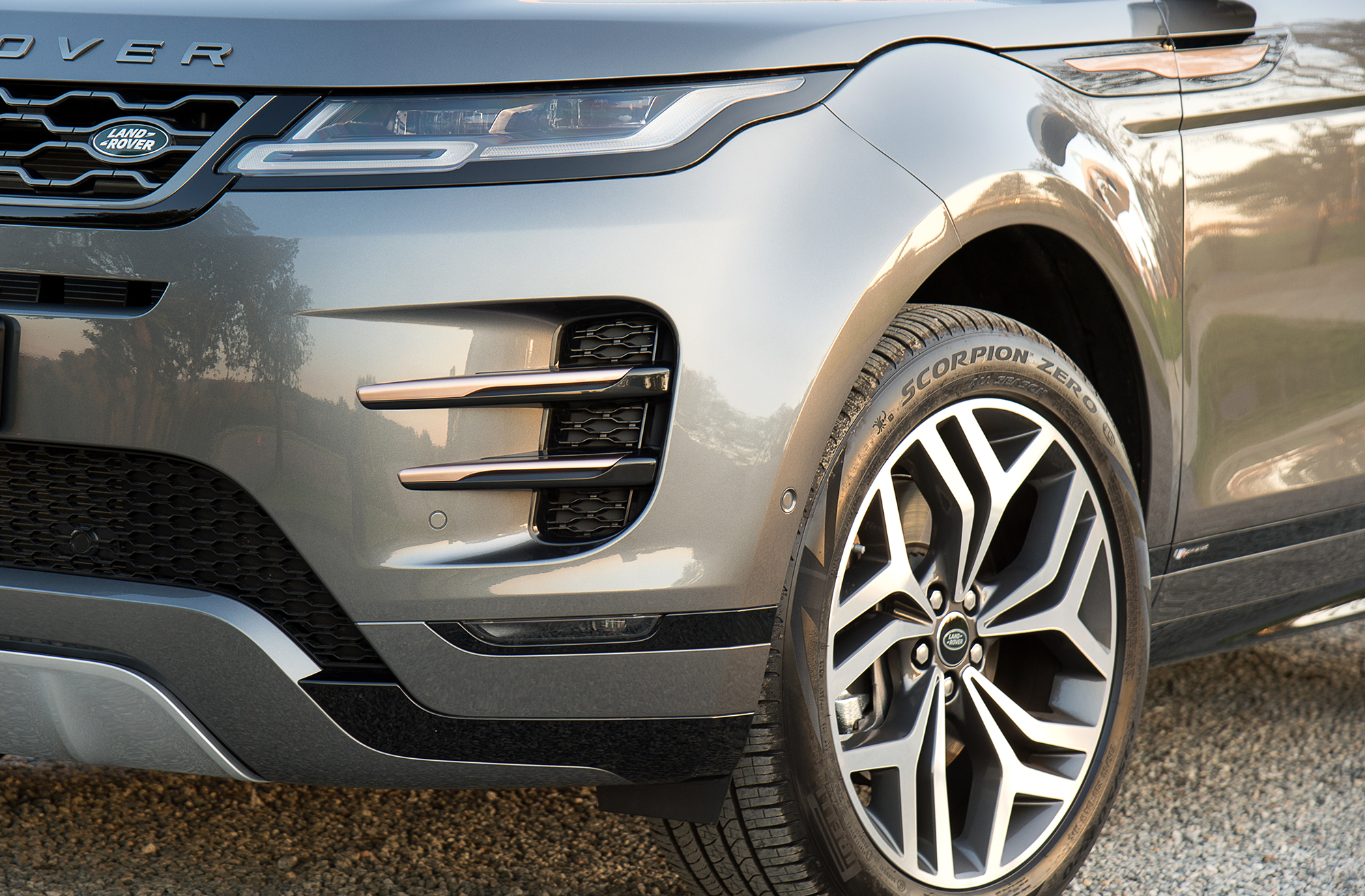 That’s underlined by those big alloy wheels, and the lack of low-range. The Evoque relies on clever electronics to perform diff lock and traction assistance duties.

After our nocturnal adventures, hitting the road in normal daylight allowed ample opportunity to stretch the Evoque’s legs. 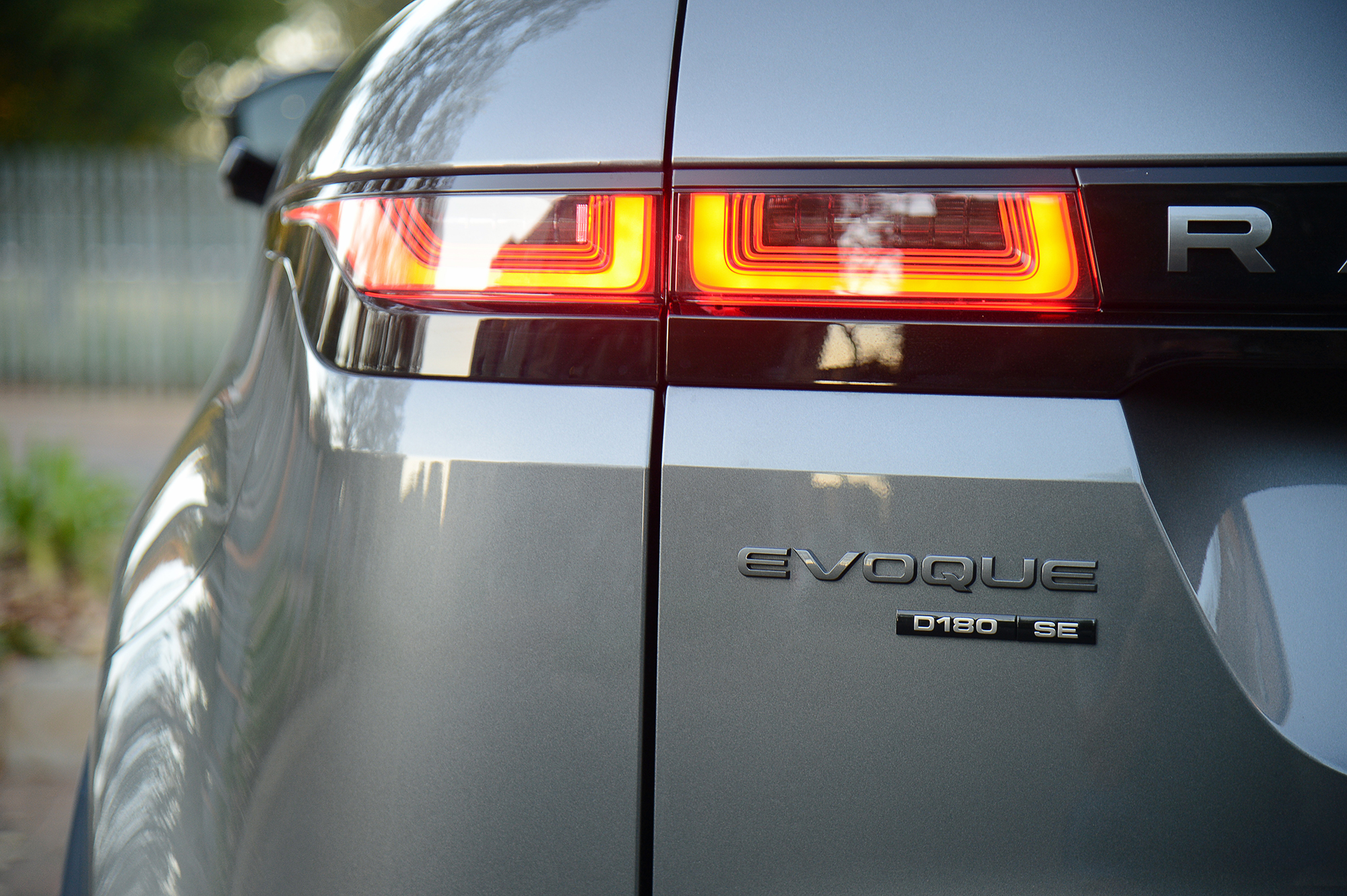 Both engines drive all four wheels via a nine-speed auto gearbox. Default drive is to the front wheels only to save fuel and reduce emissions, but the all-wheel-drive system transfers urge to the rear axle whenever required.

I piloted both models and while the P250 is the more potent model on paper, it’s hampered by a peaky power delivery that requires it to be revved with concerted intent to extract optimum urge. It also means that midrange reactions can be a little tardy.

By comparison, the D180 feels much more eager, regardless of the driving situation. It gets off the mark with more vim, and the in-gear tractability is reassuringly punchy. It’s also better at the slow-speed, circumspect trundling required when tackling off-road obstacles. 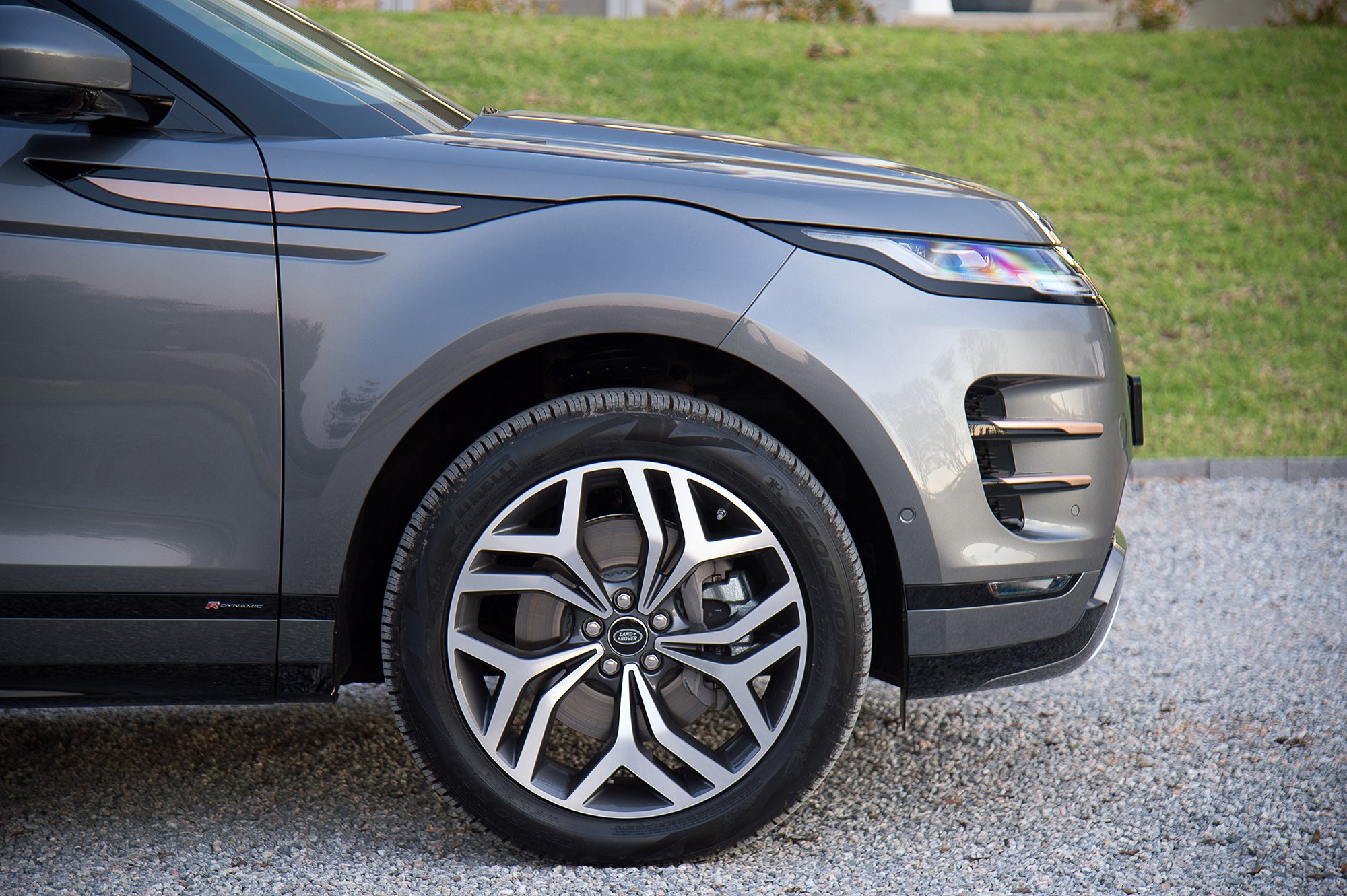 Both models can feel a little choppy on indifferent paved surfaces: the ride is on the firm side of comfortable, and those low-profile tyres on the 20-inch rims fitted to the test units tend to amplify road noise, too.

Overall noise levels are admirably contained, though, and the driving experience finds a good compromise between posh and athletic. 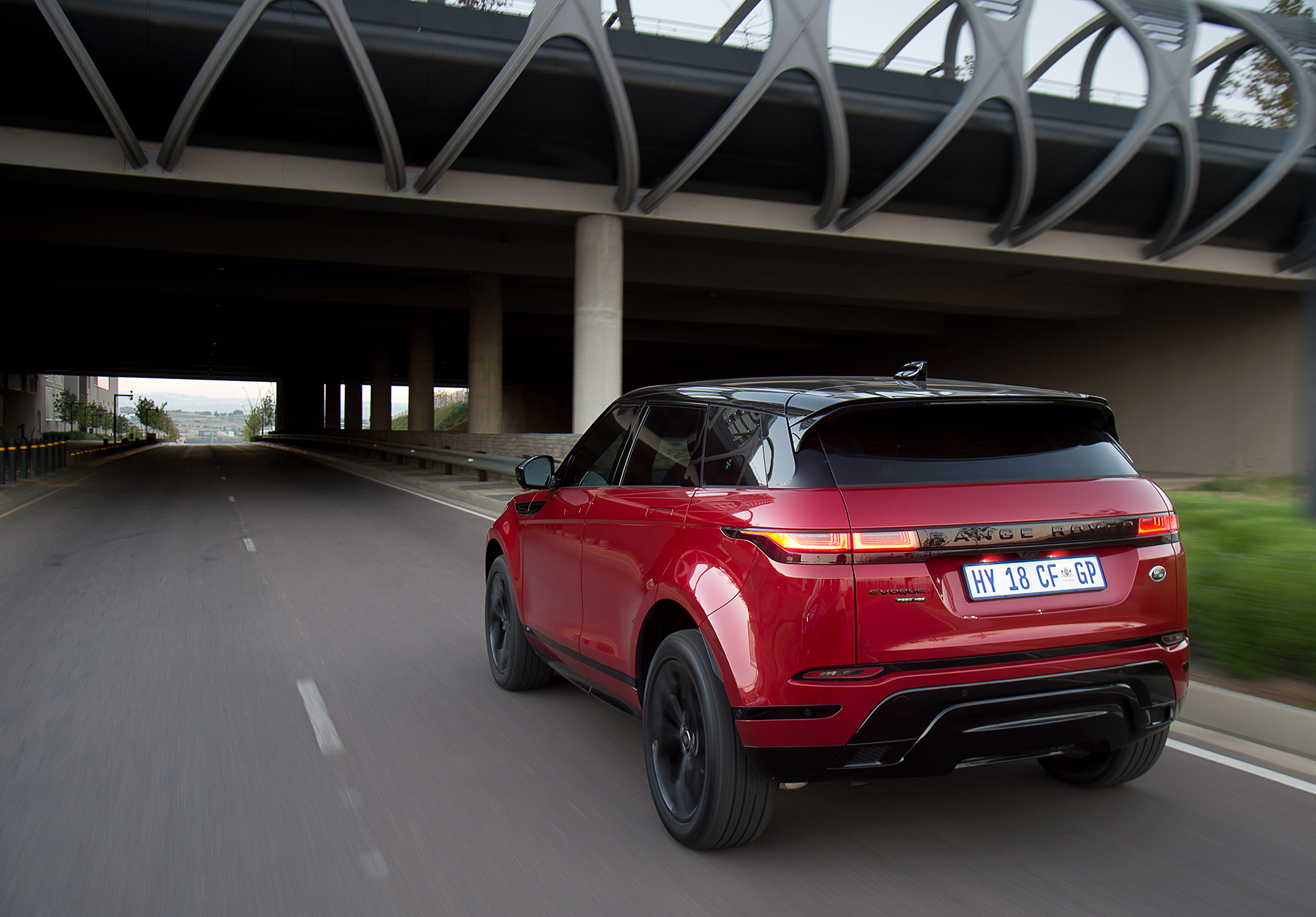 The second-generation Evoque combines the best of the original with a significantly improved interior, a lot more tech, and more all-terrain talent than buyers will ever need. It’s still very much an urban SUV, but with a lot more substance where it matters most. DM