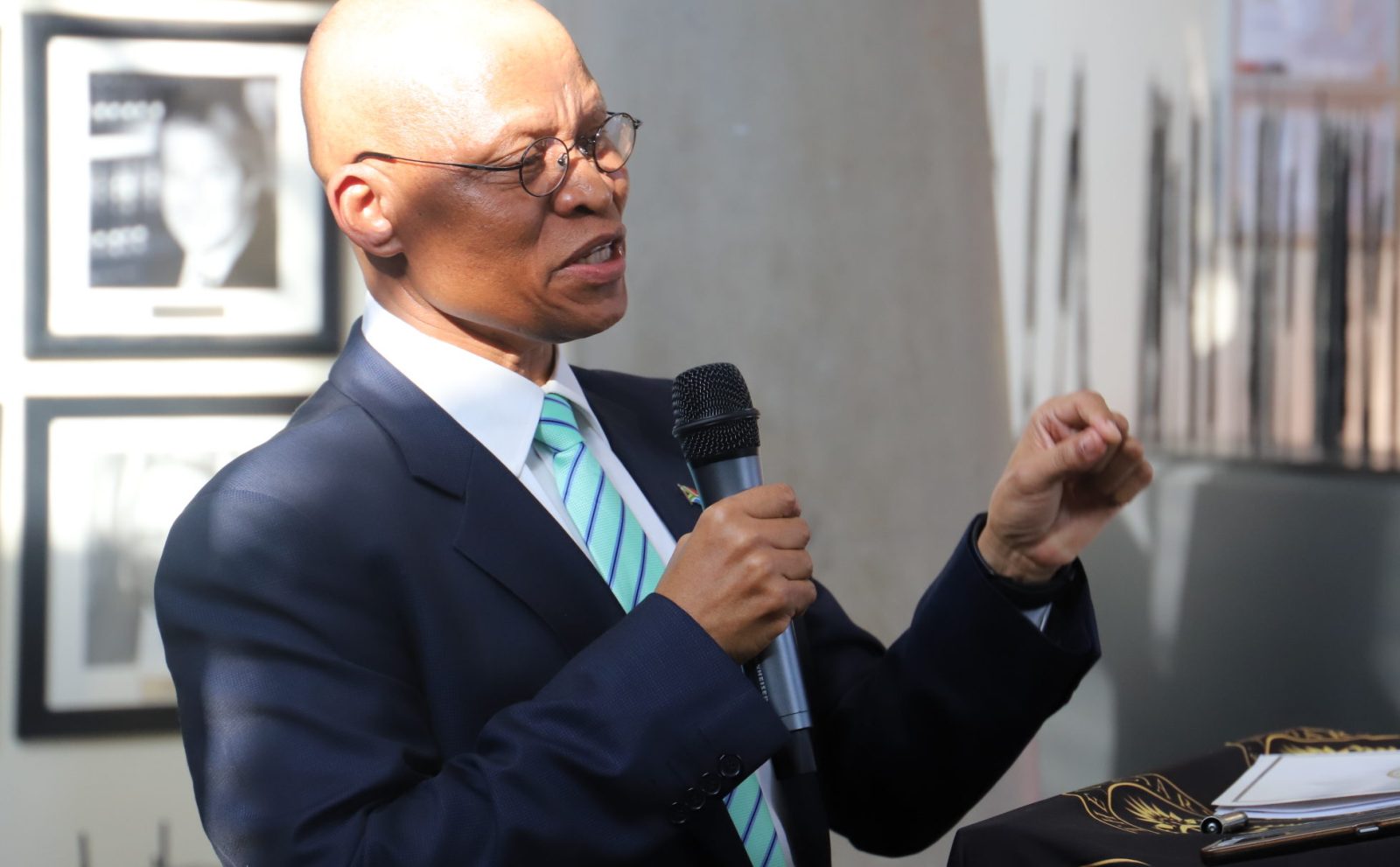 Chief Justice Mogoeng Mogoeng making his remarks after receiving the list on 15 May 2019. (Photo by: Ayanda Mthethwa)

South Africa’s most senior judge said it was apt that he had received the candidates’ lists from the IEC at the Constitutional Court, as he delivered a powerful message for those going to Parliament.

Chief Justice Mogoeng Mogoeng has urged prospective MPs and members of the provincial legislatures not to betray the people of South Africa.

Mogoeng made the comments after receiving the various political parties’ candidates’ lists from the Electoral Commission of South Africa (IEC) at the Constitutional Court in Braamfontein, Johannesburg, on Wednesday after a hard-fought election battle culminating on 8 May.

In total, 830 names were put forward and handed to Mogoeng on Wednesday – 400 for the National Assembly and 430 for the provincial legislatures.

Mogoeng said it was fitting that he was being handed the list first at the Constitutional Court before the swearing-in ceremony in Parliament.

He encouraged all those going to Parliament not to betray the Constitution as the people of South Africa depended on Parliament and the provincial legislatures to work in their best interests – and to resolve major historical challenges that had yet to be addressed.

“We have been here for 25 years and the people of South Africa have spoken. They have elected those who they have confidence in not to betray the Constitution of South Africa, its spirit, its object and its purpose,” Mogoeng said.

“Every member ought never to forget that there were injustices and they are yet to be eliminated. We dare not be defocused from the primary responsibility of ensuring that people do not continue to swim in the injustices of the past as if the new face of South Africa is just to cast a vote.”

The first sitting of Parliament will take place on 22 May 2019. Mogoeng will administer the oath and affirmation of each new Member of Parliament.

The chief justice said that he had been asked whether he felt ashamed about the prospect of affirming some of the selected MPs into Parliament – and admitted that it was a difficult question to answer.

“I can only hope that none of those who will be (sworn) into office will see the exercise as one of those inconvenient processes that one has to go through itching to occupy an office, rather than being determined to internalise the magnitude of the responsibilities that he/she is publicly declaring to the nation that they will discharge. We need a Parliament. We need a provincial legislature that will hold the executive accountable,” Mogoeng said.

Glen Mashinini, the chairperson of the IEC, said at the lists handover event that he believed that the candidate MPs and MPLs were representative of South Africa in all its diversity.

“Between them, the 830 individuals represent the diversity of our country in all its vibrant colours, cultures, languages, religions and traditions. They indeed manifest the rainbow nation that has characterised our country since the dawn of our new democracy,” Mashinini said.

The National Assembly will be comprised of 45.25% female representatives in 2019. Mashinini says this is an improvement, as women MPs made up only 42% of the total in 2014. In terms of the provincial legislatures, the province with the greatest gender equity is Mpumalanga, half of whose representatives are female. By contrast, only 35.71% of prospective MPLs in the Western Cape were female.

The average age of a representative in Parliament is 50 years, the same as in 2014. The oldest Member of Parliament is the president of the Inkatha Freedom Party, Mangosuthu Buthelezi, at 91. The youngest member will be 23-year-old Sibongiseni Ngcobo of the Democratic Alliance (DA). The youngest member of a provincial legislature is 21-year-old Karabo Khakhau, who will represent the DA in the Free State legislature.

Handing over the list to Mogoeng, a smiling Mashinini said:

“It is fitting that we hand over the list at the Constitutional Court because our electoral democracy is firmly rooted in our Constitution and our rule of law.” DM