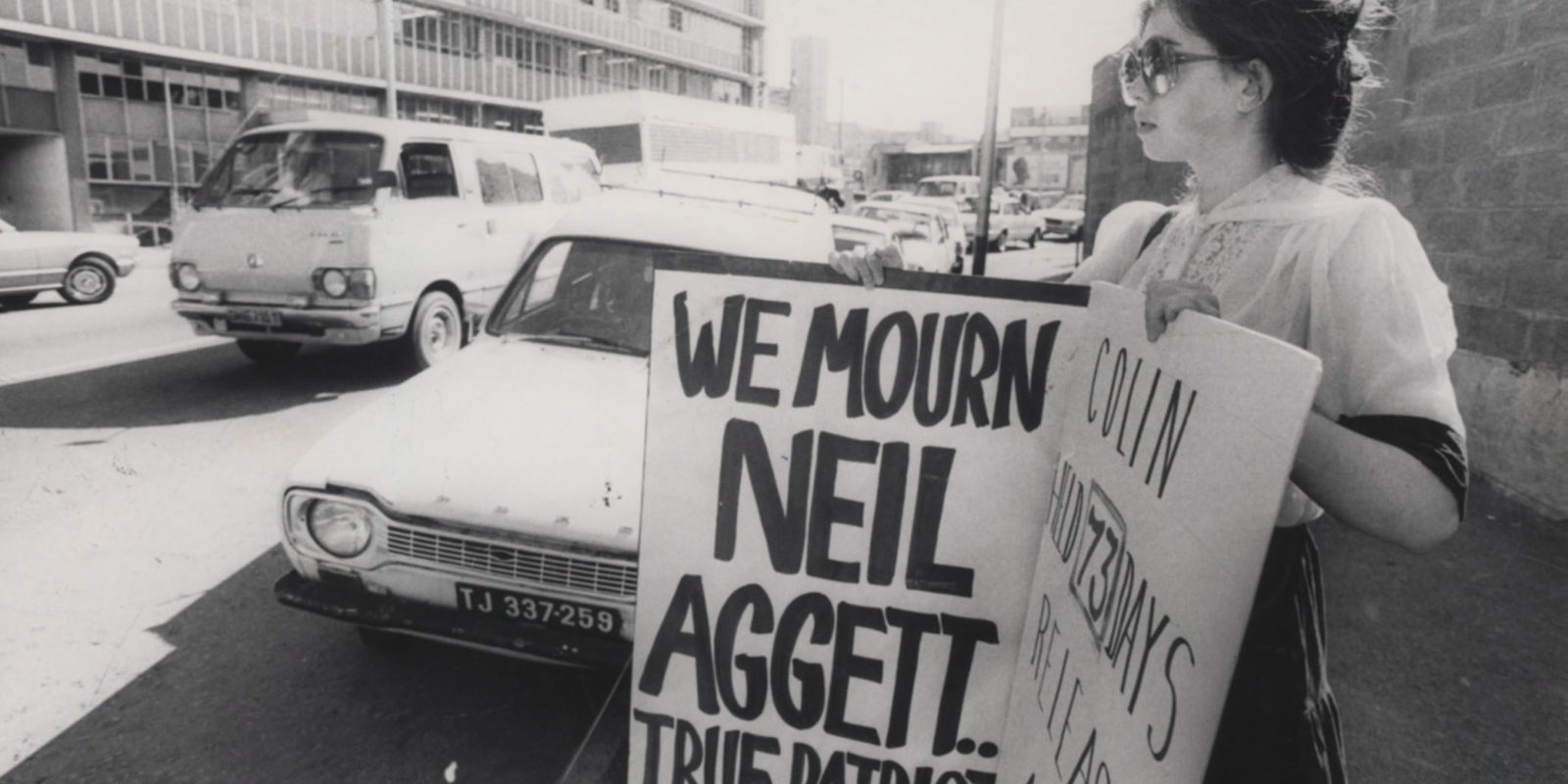 In 1982, anti-apartheid doctor and trade unionist Neil Aggett was ‘found’ dead in his cell while detained under security laws at the notorious John Vorster Square police HQ in Joburg. An inquest ruled his death ‘suicide’. Now his torturer is dead, and 37 years later his sister is still searching for answers.

Old hurts and heartache churned up for Jill Burger when she heard the news that apartheid-era security branch policeman Steve Whitehead died this autumn. Whitehead tortured her brother Neil Aggett, leading to his death in detention in 1982.

In an uncanny twist, the news came just the day after Burger received a call in her Oxfordshire, UK home on 26 April 2019 telling her that the National Prosecuting Authority (NPA) had finally decided to reopen the 1983 inquest into her brother’s death. But with Whitehead dead at 62, apparently from cancer, he will never have to answer.

Testimony from the Truth and Reconciliation Commission (TRC) hearings identified Whitehead, then a police lieutenant, as the man who led the torture campaign against Aggett, a doctor and trade unionist, during his 70 days in detention. Aggett, aged 28, was found hanged in his cell on 5 February 1982 year at Johannesburg’s John Vorster Square police headquarters (now called Johannesburg Central) where he had been held. Aggett’s death was declared a suicide.

Whitehead was never questioned. He never applied for amnesty and never faced prosecution, or even Aggett’s family and friends. Aggett’s case was one of about 300 referred for further investigation by the NPA following the TRC final reports in 2002.

The peculiar timing between the NPA’s announcement on Aggett’s inquest on 26 April being reopened and news of Whitehead’s death on 23 April, has swirled up lingering suspicions and speculations. Without clear answers, questions remain over the NPA’s prevarication, plodding and political interference. It also reframes the genesis story of South Africa’s democracy in the context of trade-offs and dark deals made to protect perpetrators of atrocities in the old and new order.

Burger says: “While I’m elated that the inquest is being reopened, I still don’t have answers into why Neil was targeted by the security branch police and exactly what happened to him, especially in the last days before his death. I’m 70 now, my father and mother have passed away and so has my older brother. It’s just me now and I want to know,” says Burger.

She remains convinced that Aggett didn’t take his own life. She says: “Just days before he died he was asking for a book on surgery. He had intention and purpose and he was going to study further to become a surgeon.”

Burger says she does feel cheated that Whitehead will not face a judicial process, but she says setting the record straight, even posthumously, about Whitehead’s legacy matters.

“His wife will have to hear publicly about what he did, so will his family and friends,” says Burger.

Dr Gavin Andersson met Aggett in the 1970s when he was already a qualified physician and involved in the trade union movement through helping at the Industrial Aid Society, set up to give workers legal advice and support. Aggett would later, after meeting activist and trade unionist Oscar Mpetha, become a full-time, but unpaid organiser for the Food and Canning Workers’ Union (FCWU).

“Neil would work through the night at Baragwanath Hospital’s casualty department, stop for breakfast, go to the union office to work, then head back to the hospital at night. He had remarkable tenacity and will,” says Andersson, who also became a banned person.

He remembers Aggett as a quiet and considerate person, “the opposite of the macho man, but someone with an impish sense of humour”.

Andersson calls it “cruel, insane and Kafkaesque” that Whitehead got to live his life while “our beloved friend’s life was snuffed out before he was even 30, and with the long delays it becomes the accepted norm that nobody gets prosecuted”.

Whitehead went on, in the democratic era, to reinvent himself as a counter-intelligence specialist. His company profile boasts of working for government agencies around the world including the ANC-led government itself. His company, CBIA (Corporate Business Insight and Awareness) in Centurion, of which he was the founder and managing executive is still listed as active and his wife Claudine is listed as an employee there. Whitehead was also a director of a number of other companies and served on the advisory board for an international espionage research institute.

“These people had certain skills and they had lots of intelligence that the new government’s intelligence would have found useful,” says Shaik.

Shaik says that in the days of democracy as a fragile miracle, there was a reluctance to prosecute anyone for apartheid-era crimes. He says Thabo Mbeki’s presidency was confronted with the dilemma of across-the-board prosecutions for atrocities committed by ANC members as well as security branch members. It led to a 2003 decision to suspend all investigations on all TRC cases referred to the NPA.

“At 25 years of democracy, we forget that we were negotiating with enemies in a brutal time in our country in the 1990s. Maybe we were too hasty to put things behind us and we believed that the TRC would close the book on these matters.

“Many apartheid security branch policemen relied on inquests which found no one to be responsible as a way to avoid prosecution. They did not calculate the ferocity of the human rights lawyers who have fought like bulldogs to have these inquests reopened,” he says.

While he doesn’t believe political masters are pulling the strings to cover-ups for particular individuals in the ANC, he says the NPA has been marked by dysfunction in the last five years.

Shaik believes re-opening of the inquests is a “reawakening”; they’re also the opening of a can of worms which he says will make many uncomfortable. It’s those from both sides who may face prosecution; it’s white South Africans who chose wilful ignorance for apartheid crimes committed in their names; and black liberation proponents today for whom the names of Aggett, Ahmed Timol and many others who died in detention are an embarrassment because it means they have to admit that not just blacks were part of the revolution, he says.

For human rights lawyer Moray Hathorn, who has worked on the Aggett case as well as the Nokuthula Simelane, Ahmed Timol and Fort Calata cases, the reopening of the Aggett inquest is a victory. It comes after the Simelane and Timol cases were reopened and successfully led to legal prosecution – even though the matters are still not concluded.

“We believe that by early next year at the very latest the inquest into Neil’s case will begin. The Judge President now has to appoint a judge and a date has to be set,” says Hathorn.

He hopes the inquest will shed light on unresolved questions around Aggett’s death in detention; about Whitehead and possibly others’ actions; and also the political deal-making that allowed Whitehead to never be called to the stand. Hathorn says the NPA damningly “reacted very slowly”, despite new evidence presented to them over many years that would have been grounds to re-open inquests.

This includes evidence of policeman having perjured themselves in the TRC hearings as well as affidavits by former National Director of Public Prosecutions Vusi Pikoli and former head of the NPA’s Priority Crimes Litigation Unit Advocate Anton Ackermann confirming political meddling in obstructing them from doing their jobs.

Hathorn has also last month made submissions to the Zondo Commission on behalf of journalist Lukhanyo Calata. His father was Fort Calata, one of the four activists known as the Craddock Four who were brutally killed by security police outside of Port Elizabeth in June 1985. The submissions lay out “chapter and verse” on how political interference compromised the TRC’s recommendation for cases to be reopened.

The journey to the full closure of the cases in the Simelane and Timol is still some way off. Aggett’s is just beginning and Calata’s is far on the horizon.

It means more waiting for someone like Burger but she’s not giving up. She’ll wait some more because she lost a brother, not a political pawn. DM

Daily Maverick’s questions sent to the NPA’s Bulelwa Makeke for PLCU head Chris MacAdam were not answered despite deadline extensions.

On the up: SA retail sales rise in February after ten months of decline

Interim results: EOH revenue is down — but the technology services group has delivered better-quality earnings