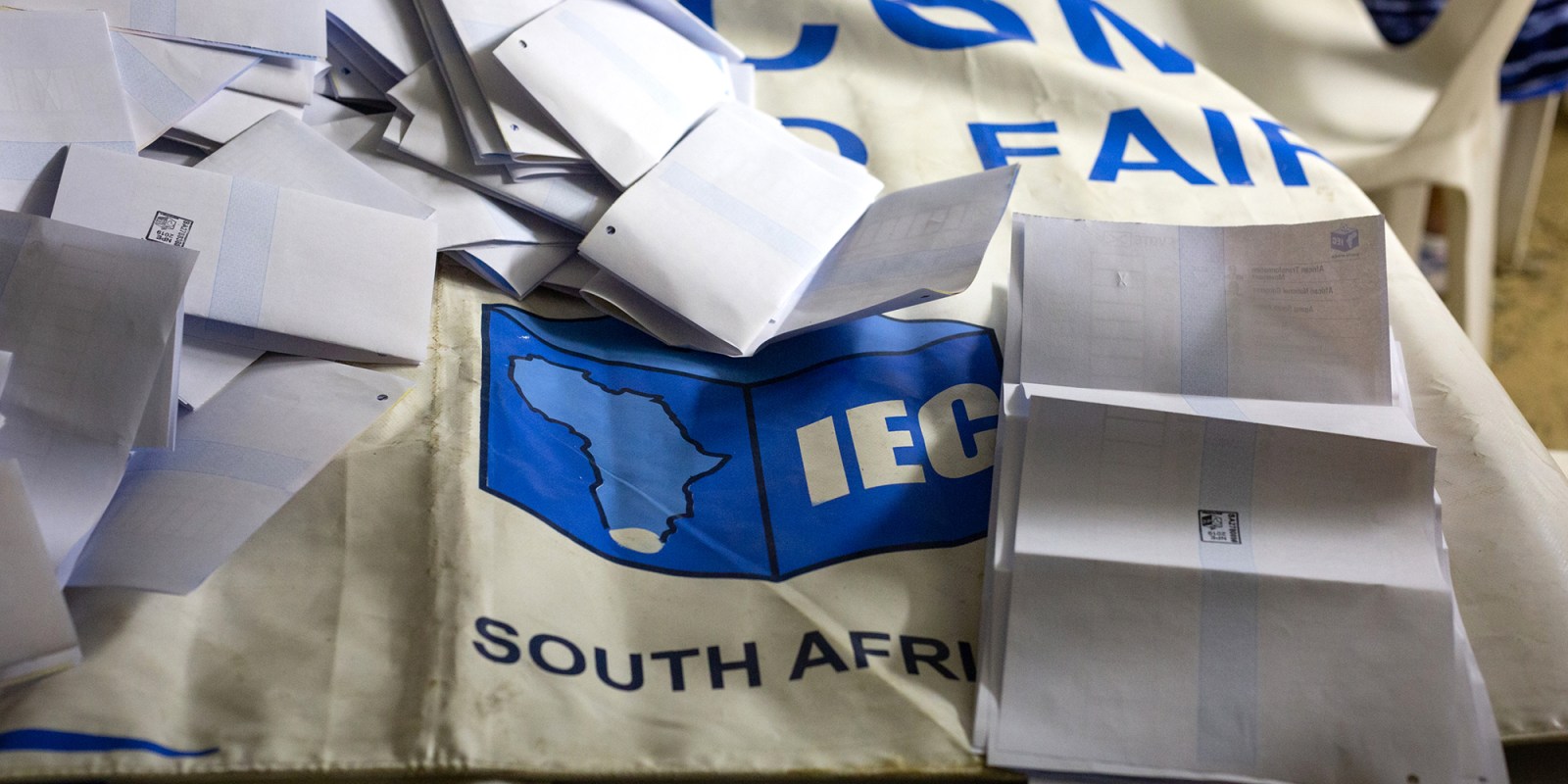 Completed ballots sit on a table at a polling station in Alexandra, Johannesburg, South Africa, 08 May 2019. (EPA-EFE/Yeshiel Panchia)

Voter turnout dropped to record lows during the elections, which increasing numbers of citizens no longer see as a vehicle for reaching their aspirations.

Voter turnout was always going to be low, but few expected it to drop as far as it did. There were signs: The long-term downward trend, a 47% drop in the registration of 18-to-19-year-olds, polls showing voter uncertainty. Days before the polls opened, #IWantToVoteBut trended, with social media users explaining why they wouldn’t make their mark.

The 2019 general elections saw the lowest voter turnout in the democratic era since turnout was first recorded in 1999. While different conclusions can be drawn, it all points to politics becoming more complicated.

“South Africa’s moving out of this era of absolute adoration of elections. In a way, the citizenry and electorate are growing up and becoming more cynical and I think, in part, the politicians are contributing to this,” said Professor Susan Booysen, director of research at the Mapungubwe Institute for Strategic Reflection and author of multiple books on politics.

Voter turnout in the national election dropped from 73.48% in 2014 to 65.99% in 2019. In provincial elections in Eastern Cape, Free State, Gauteng, KwaZulu-Natal, Mpumalanga and North West turnout dropped by around nine percentage points.

Most pre-election predictions suggested turnout would continue to fall and drop by around three percentage points, but few predicted how drastic the decline would be.

“What is materially true is that people are tired and fed-up with the political system. That is the basis of it. Everything else is secondary, the weather and so on,” said IFP spokesperson Mkhuleko Hlengwa as the results continued to come in at the IEC’s national results centre last week.

“This was a protest on the part of the citizens to shake everyone up to the realisation that they need to change how they do things — and all political parties need (to) reflect.”

Prior to the elections, StatsSA said there were 35.86 million eligible voters. The IEC said 74.6% of eligible voters were registered, with a large portion of young people deciding not to join the voters’ roll.

Booysen said citizens were realising elections were “no magic formula” to achieve the change they wanted to see and research had shown that people also saw the protest as a way to supplement elections to have their voices heard.

Analysts and party representatives said issues such as inclement weather in parts of the country on election day and voting stations opening late or running out of election materials likely contributed to the low turnout, but they were only secondary influences.

“I think there’s a lot of voters out there that have lost hope in especially the bigger parties, in the governing party especially, but also in the official opposition,” said Wouter Wessels, head of elections at the Freedom Front Plus.

“That means they just decided not to go and vote because they’re disgruntled with their previous choice, but they haven’t decided to make a move to an alternative.”

Hlengwa said the low turnout rate followed other moves away from traditional politics. The #FeesMustFall movement largely rejected organised political parties. The record 48 parties on the national ballot was a sign people believed established parties were not accountable, he said.

“It could have a number of dynamics: One, it could be speaking about the maturity of our own democracy; two, it could also talk about instances of voter apathy and one of the messages that we in the ANC have always been pushing forward is that participating in elections is an important way of asserting our own democratic dispensation.”

The failure of dominant parties such as the ANC to meet expectations, however, probably contributed to the problem.

“I think people have come to the point where they’re saying it’s useless for me to go and give my mandate to any of these political parties because not one of them delivers,” said African Independent Congress treasurer Margaret Arnolds, adding that service delivery challenges were keeping voters away.

Booysen said voters were becoming more cynical about political parties, while their leaders had struggled to connect with voters and had ambiguous policies.

Unisa’s Dr Somadoda Fikeni said the low turnout might reflect a portion of the population’s distrust of the political system.

“People might be beginning to worry about the system itself and therefore beginning to be alienated or losing trust in the entire system, and that is not the whole population. We still have a decent number (of voters). However, the worry is that those who are not participating have a considerable number of young people,” said Fikeni.

Political parties want to reverse the downturn, but after they campaigned along with the IEC to promote registration drives and get voters to the polls, it’s unclear how they can arrest the decline.

“The only way that young people can play an active role in this country, construct a country of their own wishes and dreams, is if they participate in elections,” said Mabe.

“But also we must give them reason why they should vote,” she added.

Hlengwa said by staying away from the polls out of frustration with the current government, voters were helping to keep that same government in office.

“The IFP says if you are unhappy, don’t define yourself outside of the system. You need to fix the system which drives the process and that system is elections because it delivers power for governance and service delivery and so on and the unintended consequence of protesting in the form of not voting has been to deliver us yet again with the ANC,” he said.

While national voter turnout has dropped from 77.3% in 2009 to 65.99% in 2019 and more voters are choosing to stay away from the polls than cast a ballot, it may not be as alarming as it sounds.

There is a benefit to the low turnout, at least for parties aiming for only a few seats in the legislature.

Due to the low numbers, the number of votes required to win a seat in the National Assembly dropped to about 43,000, which along with the IEC’s fraction calculation system for allotting seats, is generally assumed to assist smaller parties in getting a seat in Parliament. DM