KwaZulu-Natal: Old kid on block back with a vengeance 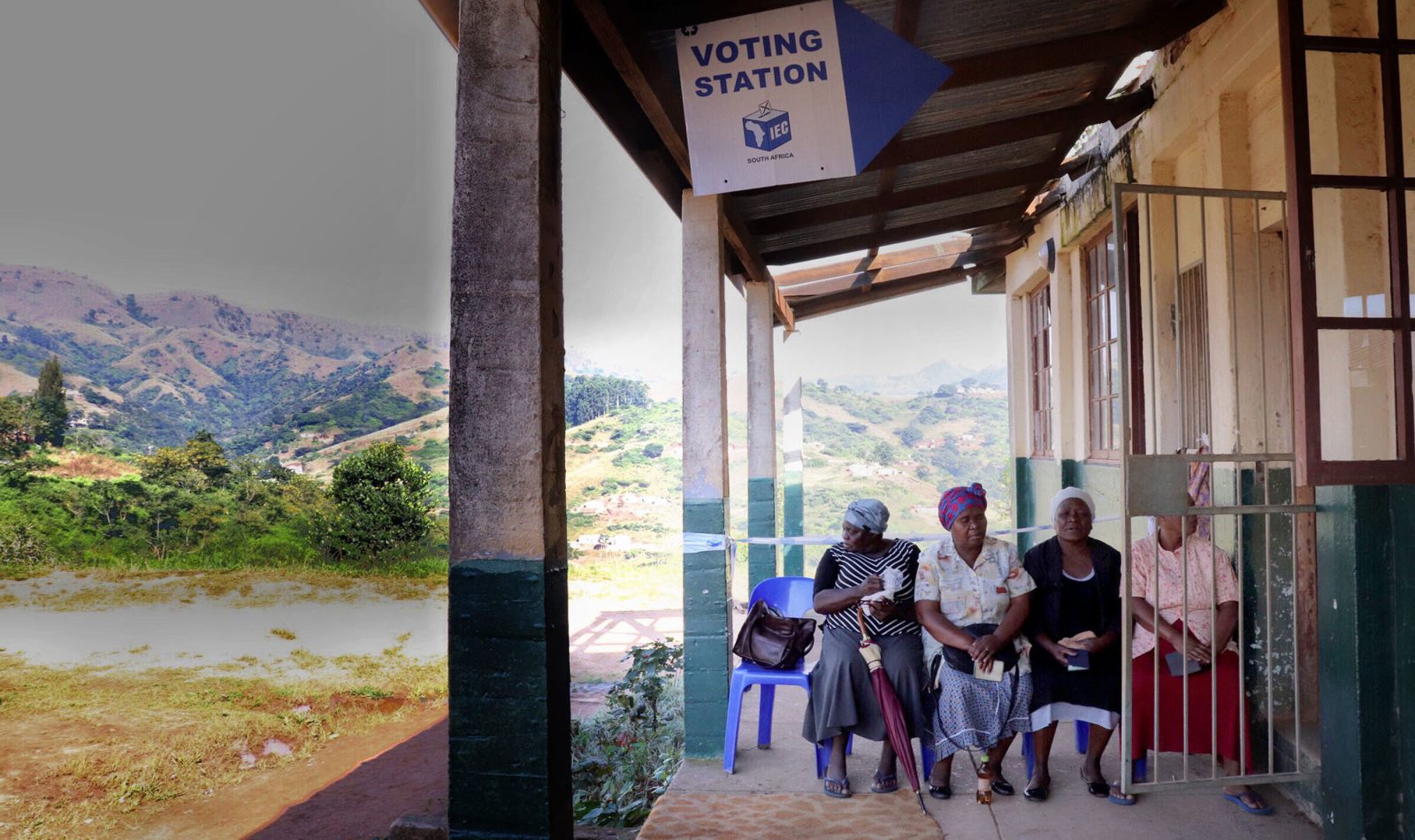 Voters line up at Ngwoneni Primary School voting station in Engonweni, Ndwedwe, in KwaZulu-Natal on 8 May 2019. (Photo: Aisha Abdool Karim)

One thing is clear in the heavily contested province of KwaZulu-Natal — the ANC had better watch out for its old rival, the IFP, which has reclaimed its position as the main opposition, putting in a particularly strong showing in the northern region.

Despite its comeback, the IFP did not see the most growth in KwaZulu-Natal in 2019. That award went to the EFF, which gained just under 8% more votes since the previous national election.

The IFP, however, managed to regain traction in Northern KwaZulu-Natal, snagging seven local municipalities across the Umzinyathi, King Cetshwayo, Zululand and Umkhanyakude districts.

This is the first time since the 2009 general election that the IFP managed to regain this region.

“The reason people have put trust in the IFP is because the leadership of the IFP has integrity and is honest,” IFP national secretary General Velenkosini Hlabisa told Daily Maverick.

“When the IFP is given an opportunity, the resources of the state do not get wasted through corruption.”

KwaZulu-Natal was marked as a high-risk area for election violence and the election campaign was marred by various service delivery protests, particularly in the Alfred Duma local municipality in uThukela district. While the province continued to recover from devastating floods which claimed the lives of 70 people, there was also an ongoing municipal workers’ strike in Ethekwini up until 7 May 2019, the day before the national elections.

Even on election day, Ethekwini still bore the remnants of protest action in the city with rubbish strewn across the metro. In the end, the district had a 69.72% voter turnout, an 8.4% drop since 2014.

Reservoir Hills, in Ethekwini, was hit hard by the floods, which occurred in late April. It also saw residents from informal settlements taking to the streets to protest against the lack of housing and poor service delivery.

Hillview Primary School voting station, in Reservoir Hills, was the only station in the area where most people voted for the ANC, the party taking 61.5% of the vote.

Both the IFP and ANC saw a correlation between low voter turnout, voter discontent and the increasing frequency of service delivery protests in the province.

In the Ulundi local municipality, the IFP’s main stronghold, a protest broke out on election day near the Ekujulukeni voting station. Protesters reportedly blockaded the roads to prevent IEC officials from accessing the voting station and threw rocks at police vehicles. The voter turnout was just above 32%.

The growing discontent across KZN is something the IFP chose to tap into during its campaigning, which specifically targeted areas with a track record of service delivery protests.

“The protest by communities is all over in KwaZulu-Natal, which is an indication that people are not satisfied with service delivery and the IFP will tap into those issues,” said Hlabisa.

Of particular interest to the party was the uThukela district, the iLembe district and Ugu district.

Hlabisa was confident in the IFP’s “strong track record when it comes to service delivery” enabling it to gain a foothold in these areas. This was in spite of a recent report revealing that IFP stronghold Msinga was found to be the worst-run municipality in the country.

In response to questions by Daily Maverick about the municipality’s standing in the report, Hlabisa replied:

“The standards that were used in that report are not for a deep rural municipality. Obviously, you will get a wrong result.”

Even with the release of the report, Msinga remains loyal to the IFP. The party won 64.38% of the votes in the municipality, just more than a 14% increase from 2014.

ANC KZN provincial secretary Mdumiseni Ntuli admits that the ruling party has failed to deliver on its promises in some of its KZN municipalities, which has negatively impacted on its result.

“We’ve gone into the elections having a number of areas governed by the ANC, where there was a great deal of instability and a failure… to address some of our basic services and service delivery,” said Ntuli.

“The performance of the ANC may have been affected by violence in those areas. We know there were municipal worker strikes in eThekwini, rubbish was not collected, and worst of all, water access was affected.”

Although the party gained the majority in the Ethekwini municipality, it had a 10.5% drop in support since the 2014 elections.

The IFP held on to the four local municipalities it won from the ANC in the 2016 municipal elections, namely, Hluhluwe, Mthonjaneni, Nqutu and, significantly Nkandla, former president Jacob Zuma’s home base.

Hlabisa acknowledged that having Zuma as ANC president in the 2014 elections may have helped give the ANC an edge, as “some people thought voting for Mr Zuma will be somehow advantageous because he is from KwaZulu-Natal”.

Zulu culture, in its most traditional form, is strongest in the deep rural areas of northern KZN. The IFP has historically embodied Zulu ideals and resonated with voters in the region. But when Zuma stepped in, the charming, proud Zulu president managed to shift the vote towards the ANC.

Despite President Cyril Ramaphosa stepping up to the plate, it is clear that Zuma is still loved in the province.

Hlabisa did not think that the “Zuma-Ramaphosa issue” played a big role in influencing the 2019 results. He instead attributed the IFP’s upswing to the fact that it was “a solid party in 2019”.

The formation of the breakaway National Freedom Party (NFP) in 2011 brought to light fractures within the IFP and cost the party votes in the previous national elections, according to Hlabisa.

“Once you split, you are a house divided,” said Hlabisa.

“This time around we are solid, we had no challenges within the party.”

The NFP, however, was unable to recover in the 2019 election, securing only 1.57% of the provincial vote. The party took a blow after being unable to contest the 2016 municipal elections.

“When you’re a political party and you don’t contest the election, that is something that is unjustifiable,” NFP provincial secretary Zandile Myeni told Daily Maverick.

“We had an exodus of members moving to other parties and after that, you saw a drop in trust from the general public because any party is there to win the election.”

The NFP won two municipalities, eDumbe and Nongoma when contesting in the 2014 elections. While the IFP won 46.18% of votes in Nongoma, the ANC was able to grab a majority with 36.36% in eDumbe.

“The fact remains that we are a breakaway party from the IFP, but the IFP is not a threat to us. The threat to us is the ruling party,” said Myeni.

The ANC struggled in 2019 with combating infighting issues, which echo those of the IFP in 2014.

“We could have done better if there was more unity and we weren’t taking each other to court left and right,” said Ntuli.

“I think they (the IFP) have done very well to activate voters that were disillusioned in the areas of the northern part of KwaZulu-Natal, which have never been our own stronghold,” Ntuli told Daily Maverick.

The ANC, which dropped by just more than 10%, grabbing 54.22% of the provincial vote, blamed its result on low voter turnout.

“If you look at the areas where the ANC has been in charge, the ANC has had a massive support base. The decline does not seem to be going on the side of the IFP, it’s more people who have decided not to vote.” DM