Tense wait for KZN politicians as results dribble in 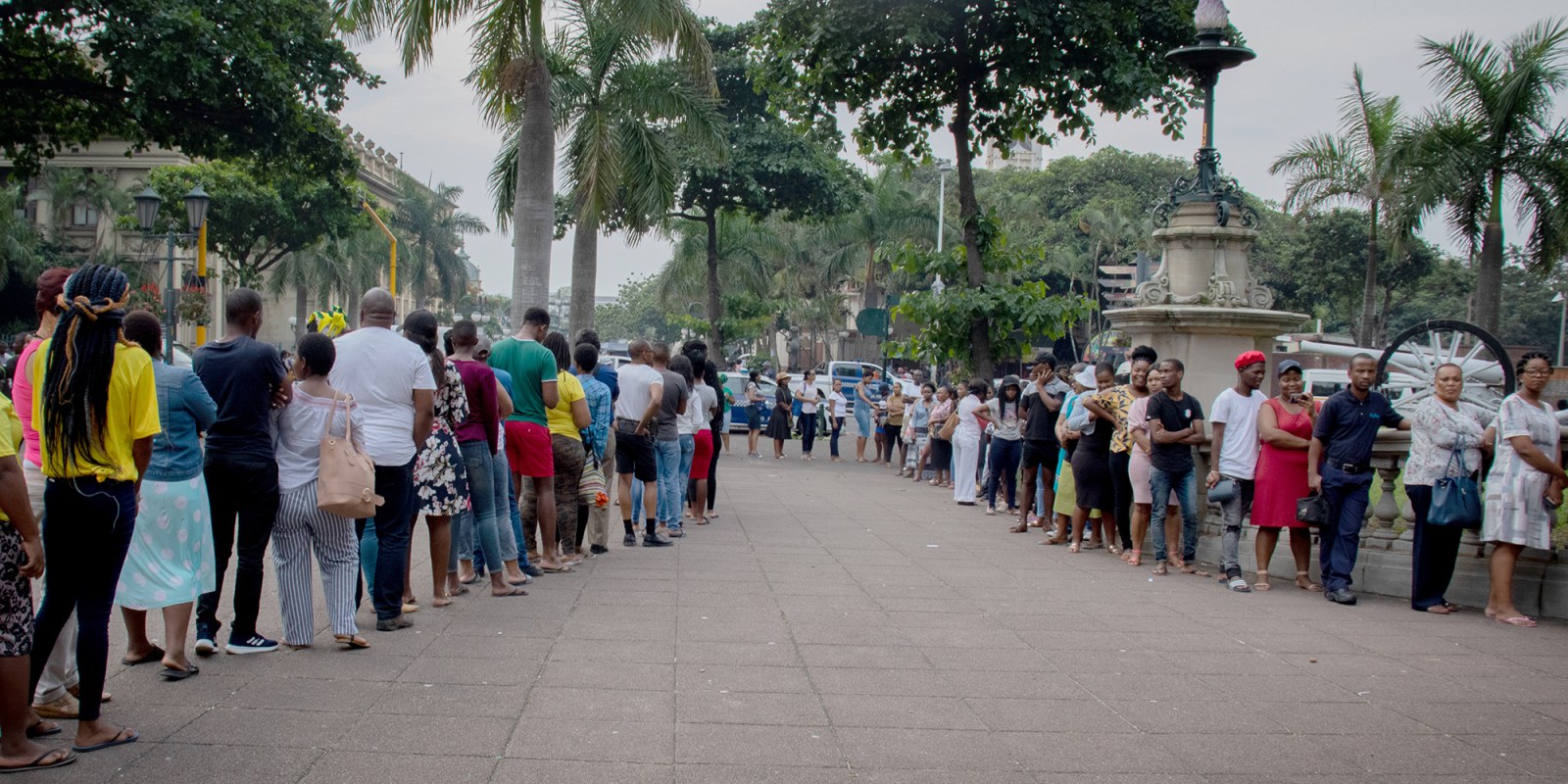 Voters line up to cast their ballots at Durban City Hall voting station in KwaZulu-Natal on 8 May 2019. (Photo: Aisha Abdool Karim)

KwaZulu-Natal has traditionally been slow to return election results and the 2019 polls have proved no exception. With less than half of voting stations reporting by Thursday night, it made for a long and anxious wait for the small political parties gathered at KwaZulu-Natal’s IEC results centre. While it looked likely that the ANC would retain control of the province, the question of which party would take up the official opposition mantle was still far from settled.

How do politicians kill time during the long wait for elections results?

By staring fixedly at the IEC’s results screens, talking up their parties’ chances to journalists, and engaging in some friendly competitive banter with other parties.

At the IEC’s results centre in Durban, KwaZulu-Natal, International Relations Minister Lindiwe Sisulu swept in on Thursday afternoon and revealed herself to be world-class at the art of political sledging.

Pausing in front of an unmanned desk set up for the Black First Land First (BLF) party, she announced: “They’ve gone to look for the land”.

Sisulu offered DA KZN provincial leader Zwakele Mncwango some help: “We’ll give you headache tablets, because you’ll need them for tonight”, before asking Congress of the People (Cope) officials when they were throwing in the towel and re-joining the ANC.

Although the mood was jovial, there was little doubt that smaller parties were feeling the heat – as a nationwide poor showing of the minnows looked likely to be replicated in KwaZulu-Natal.

BLF’s provincial spokesperson Thobani Zikalala had celebrated his birthday on election day, but it seemed that South African voters were unlikely to give him the present he hoped for — “more than three seats, maybe five” in the National Assembly.

Much like BLF’s national leadership, Zikalala blamed the party’s limited resources and a biased media for its poor showing. In a province such as KwaZulu-Natal with deep rural pockets, he said BLF had been unable to reach many voters.

“We didn’t get an opportunity to see all our people face to face, because we didn’t have the resources to go to Umhlabuyalingana or Matatiele, we just didn’t have the money,” Zikalala told Daily Maverick.

“I don’t think we spent more than R200,000 nationally on campaigning. We didn’t have more than 5,000 T-shirts printed, or pamphlets, or branded cars or stadiums. We didn’t have media on our side: They only reported negatively on us and cast doubt in voters’ minds. Every time the media speaks about BLF, it’s when we are going to court or being stopped from contesting elections, or ‘one settler one bullet’.”

Although the EFF looked set to more than triple its provincial vote compared with 2014 election results, EFF provincial chairperson Vusumuzi Khoza expressed frustration with the news that at least 20 people in KwaZulu-Natal had apparently succeeded in voting twice.

“We were concerned that it’s only now that it’s been picked up that (ID documents) can actually be scanned multiple times,” Khoza told Daily Maverick.

“The IEC is terribly inefficient when it comes to use of technology. We are in the fourth industrial revolution, and they are still using a Nelson Mandela 1994-era technology.”

Khoza said that the EFF was confident the final 2019 results would prove that the party has found traction even in provinces such as KwaZulu-Natal, where the Fighters have struggled to gain a foothold in the past.

“We just went all out for all provinces because we want to change the narrative that says there are certain places where the organisation cannot grow. We even sent our people to go and vote in (whites-only Northern Cape town) Orania, so taxis arrived in Orania because you could vote anywhere.”

The National Freedom Party, which previously enjoyed relatively strong support in KwaZulu-Natal as a breakaway faction of the IFP, looked likely to confront the reality of an almost total collapse.

But NFP provincial secretary Zandile Myeni was putting on a brave face on Thursday, telling Daily Maverick that there was still time for the party’s electoral fortunes to improve.

“When you look at the current result that we have received, you can’t have emotions,” Myeni said.

“As we are here, we are tired because we are not sleeping, but we are looking at the (results) scoreboard.”

Fatigue was a common complaint among politicians watching the results, with KwaZulu-Natal’s full results expected only early on Friday morning.

“On Friday we sleep,” African Transformation Movement KZN spokesperson Sibusiso Ncwane told Daily Maverick. His kids had been complaining that his political campaigning was keeping him too busy.

“We are the new party. The last born. It’s even the last one on the ballot paper,” Gwagwa said.

“I will never get discouraged because we just started. Everybody else that is here, most of them have been here for quite some time. We’re waiting and watching.”

Though the ANC looked set to maintain outright control of KwaZulu-Natal, the position of the official opposition in the province remained up for grabs. The IFP had taken an early lead above rivals the DA, but the DA’s Mncwango told Daily Maverick that many DA strongholds in the province had yet to report results.

With general uncertainty still the order of the day, Thursday evening was much too early for celebrations for even the largest parties.

Yet some of the political contenders present had quite specific fantasies of what they would do to let loose if their electoral targets were met.

“Maybe I will take a farm or two,” said the BLF’s Zikalala, laughing. DM