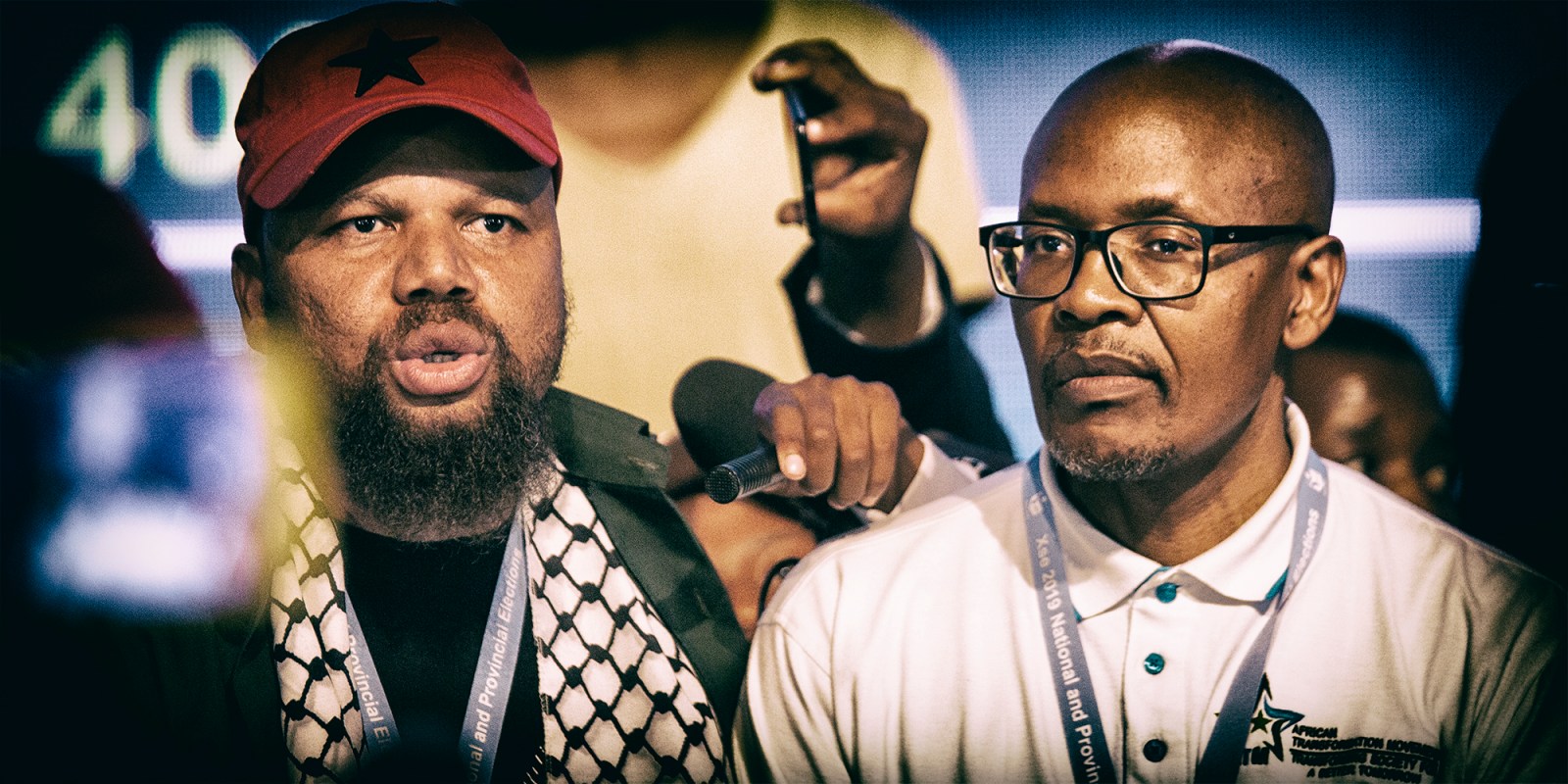 Adil Nchabeleng of the African People's Convention, left, and Mzwanele Manyi of the African Transformation Movement speak at the National Results Operation Centre in Pretoria on 9 May on behalf of small parties contesting the legitimacy of the 2019 elections. (Photo: Leila Dougan)

A smallanyana revolution started at the Tshwane National Results Operations Centre as the ‘smaller’ parties decided to join together and contest the legitimacy of the national results that are still coming in for the 2019 national elections.

As it stood by early evening on Thursday, May 9, the ANC, DA and EFF, considered the “big three”, had taken a large share of the votes of the 56% of total voting stations counted.

But the so-called smaller parties were having none of it.

Led by Mzwanele Manyi, chief of policy and strategy at the African Transformation Movement (ATM), a party founded in 2018 which had garnered 0.48% of votes cast so far, a group of “small” parties were up in arms about the process.

According to Manyi, the group had noted “irregularities” in the electoral process, specifically allegations of double voting, stolen ballots and people being turned away. The group said it had notified the Electoral Commission of South Africa (IEC), but to no avail.

Adil Nchabeleng, spokesperson for the African People’s Convention, which had 0.11% of the votes, said the 2019 election “has not been free and fair”.

He said although the election had been peaceful, it was unfair when the parties that were considered “small” were not given equal access to the media. Nchabeleng lambasted the media for focusing solely on the “big three parties”.

He said his party’s agents reported that people had been turned away from voting stations because there were not enough ballot papers, asserting that this was a “deliberate move to undermine minority parties”.

Secretary-general of the ACM Romeo Ramuada said the IEC was favouring the ANC because the government it controlled funded and paid IEC officials. He said it did not make sense for his party to receive only 2,048 votes (0.02%) after it had deployed 5,000 party agents to polling stations.

Regarding the four people arrested for having voted twice in KwaZulu-Natal, Ramuada said citizens were being arrested because of the IEC’s negligence.

“Over and above the overwhelming evidence,” said BLF deputy president Zanele Lwana, whose party had by then received 0.09% of the votes, “there is a clear political programme for a government of national unity by parties aligned to white monopoly capital”, which he identified as the ANC, EFF and DA.

Moreover, there had been a programme to “alienate dissenting voices’’ and label them as “small parties”.

The group said it would approach the Electoral Court and, if need be, the Constitutional Court, to nullify the elections. It demanded a re-run of the election to ensure a poll that was more “free and fair”. DM