In KwaZulu-Natal, the story of these elections belongs to EFF and IFP 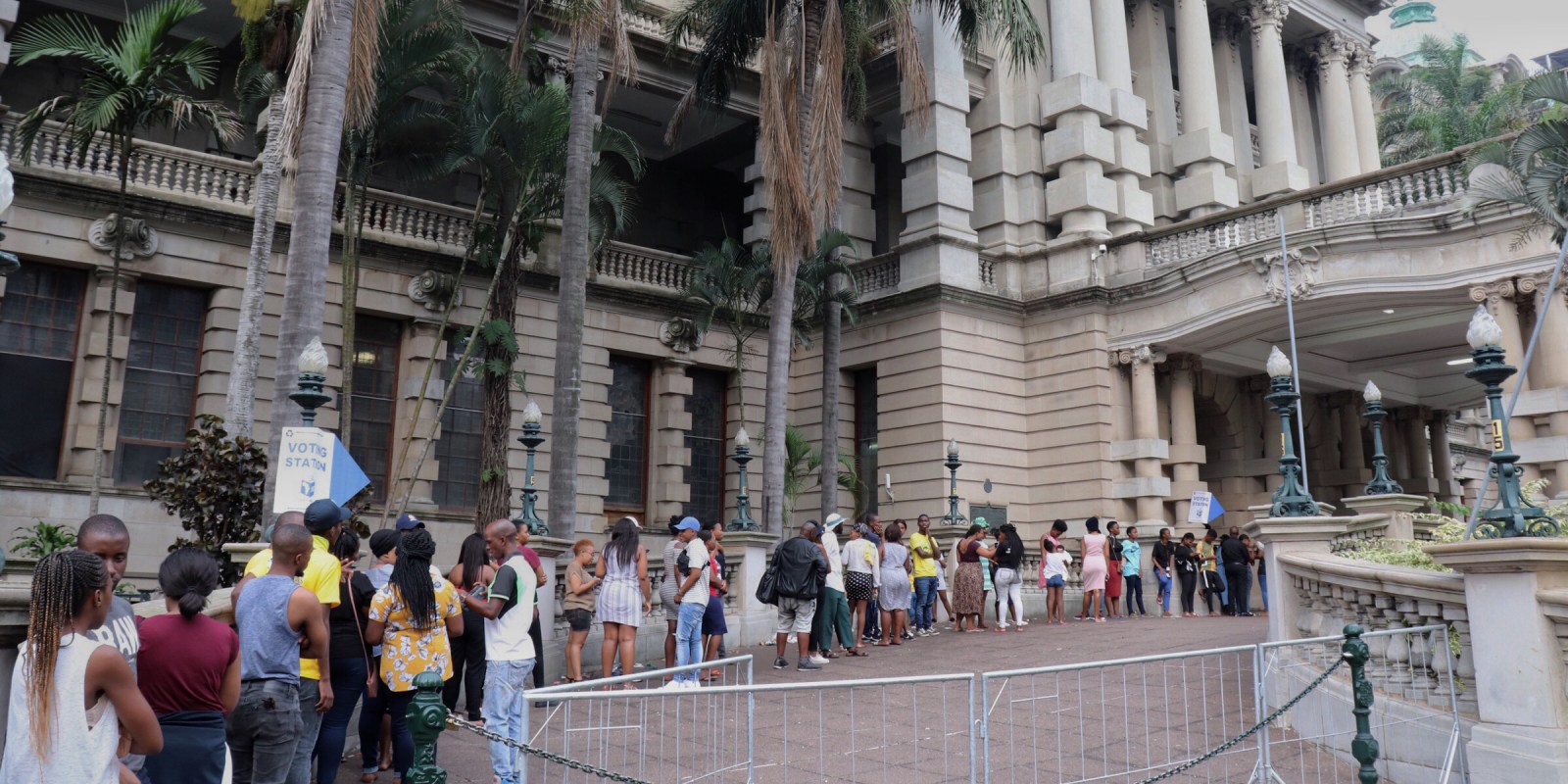 A long winding line of predominantly young voters wait to cast their vote in central Durban, KwaZulu-Natal at City Hall on 8 May 2019. Photo: Aisha Abdool Karim.

Though the ANC will maintain outright control of KwaZulu-Natal, the election in this once sure-thing province was a great deal tighter than the party would have liked.

The ANC experienced its biggest drop of support in the country in 2019 in KwaZulu-Natal, falling by almost 10 percentage points to its lowest ebb in over a decade. The big winners have been the IFP, taking over the position of official opposition from the DA, and the EFF, which quadrupled its vote.

Late on Friday afternoon, with most of the voting stations in KwaZulu-Natal having finally returned their counts, EFF officials gathered in the Durban IEC results centre began to sing.

And there was plenty for them to sing about.

In a province that has been viewed as impenetrable to the EFF, the Fighters took their support from less than 2% of the provincial vote in 2014 to close to 10% in 2019. In real terms, it was an increase of more than 250,000 votes.

Little wonder that the EFF’s KwaZulu-Natal chairperson, Vusumuzi Khoza, was beaming from ear to ear as he chatted to his colleagues on Friday.

In the past, the EFF’s failure to gain much traction in this province has been attributed at least in part to what was viewed as leader Julius Malema’s open disrespect for former ANC president Jacob Zuma, who is still adored in parts of KwaZulu-Natal as a Zulu cultural figurehead.

Khoza is quick to downplay any political impact emanating from Zuma, however.

“This thing goes beyond Jacob Zuma,” he told Daily Maverick, describing the ANC’s provincial leadership as “clueless” and lacking direction.

Yet the “Zuma effect” on KZN politics is not merely hypothetical. In the 2009 elections, shortly after Zuma had taken power in the ANC, the party’s vote in the province leapt by a staggering 17 percentage points – in an election in which the ANC’s support dropped in most other provinces.

Before the 2019 elections, the ANC KZN leadership dismissed any possibility that ANC voters in the province might punish the party for dumping Zuma, but it is difficult not to join the dots between Zuma’s ousting and the notable drop in provincial votes for the ANC.

Factionalism has also riven the ANC in KwaZulu-Natal in recent years, with a bruising power battle between ANC KZN chair Sihle Zikalala and rival Senzo Mchunu believed to have cost the party in the 2016 local government elections.

Although the official narrative has been that Zikalala has largely succeeded in restoring unity since the ANC’s 2017 Nasrec conference, poor turnout at the party’s final pre-election rally in Pietermaritzburg suggested that all might not be as rosy as presented.

But the EFF’s Khoza said his party’s surge in KwaZulu-Natal in these elections could largely be attributed to good old-fashioned shoe-leather campaigning. Judging by what Daily Maverick witnessed in the province in the days leading up to the elections, there is no doubt that the Fighters have worked hard.

Khoza said the EFF rebuilt its structures in the province over the past two years and established more than 800 branches province-wide.

“We did a lot of ground campaigning, door to door. We appreciated the importance of speaking to our voters one to one, rather than addressing them by halls and social media. That has contributed to the growth we are seeing,” he told Daily Maverick.

In the Durban IEC results centre on Friday, there was also a mood of excitement among the IFP representatives present.

Confounding the predictions of critics who said that entering the 2019 elections with 90-year-old Mangosuthu Buthelezi still on the ballot sheet would stymie any potential for growth, the IFP was able to claw back some of the losses it suffered provincially in 2014, increasing its vote by some five percentage points to just more than 15% with 97% of the voting stations counted.

The resurgence of the IFP in KwaZulu-Natal might in some ways seem mystifying, particularly if one considers that three of the 20 worst-performing municipalities in the country – according to Good Governance Africa’s 2019 rankings – are in KwaZulu-Natal and controlled by the IFP. One, Msinga, is ranked as the very worst in the country.

Yet the IFP’s success makes more sense if one takes into account the almost total collapse of the National Freedom Party (NFP), which dropped around five percentage points – almost exactly the margin gained by the IFP – in the provincial poll on 8 May.

As the NFP was a breakaway party from the IFP, it is reasonable to assume that its collapse led many of its former supporters to return to their original political home.

The reasons behind the NFP’s decline, meanwhile, are not rocket science: the party failed to contest the 2016 local government elections after failing to pay its deposit in time, its leader has been virtually absent from public view for the last few years due to illness, and three other high-ranking party officials have defected in the last few months to other political homes.

Although the DA has been stripped of its status as the official opposition in the province by the IFP’s rise, its party representatives were putting on a brave face on Friday.

They pointed out that the party at least registered a small provincial increase in votes in KwaZulu-Natal – as opposed to the DA’s provincial results in areas such as Limpopo and the Eastern Cape, where it seems to have recorded worse results than in 2014.

Still, with the last SA Institute of Race Relations poll suggesting that the DA stood to win as much as 23% of the provincial poll in KwaZulu-Natal, the fact that the final result looked likely to settle around 14% cannot but come as a disappointment.

One party agent blamed a lack of campaigning resources, saying that the DA’s national leadership had focused attention on the Western Cape and Gauteng at the expense of other provinces.

But ultimately KwaZulu-Natal will remain in ANC hands after the 2019 elections, with the ruling party set to bag a clear provincial majority of about 55%.

That result will leave the ANC in KZN breathing a little easier after a fraught campaign season – but it’s clear that the political terrain is shifting quickly and significantly in the province with the second-highest number of registered voters in South Africa. DM