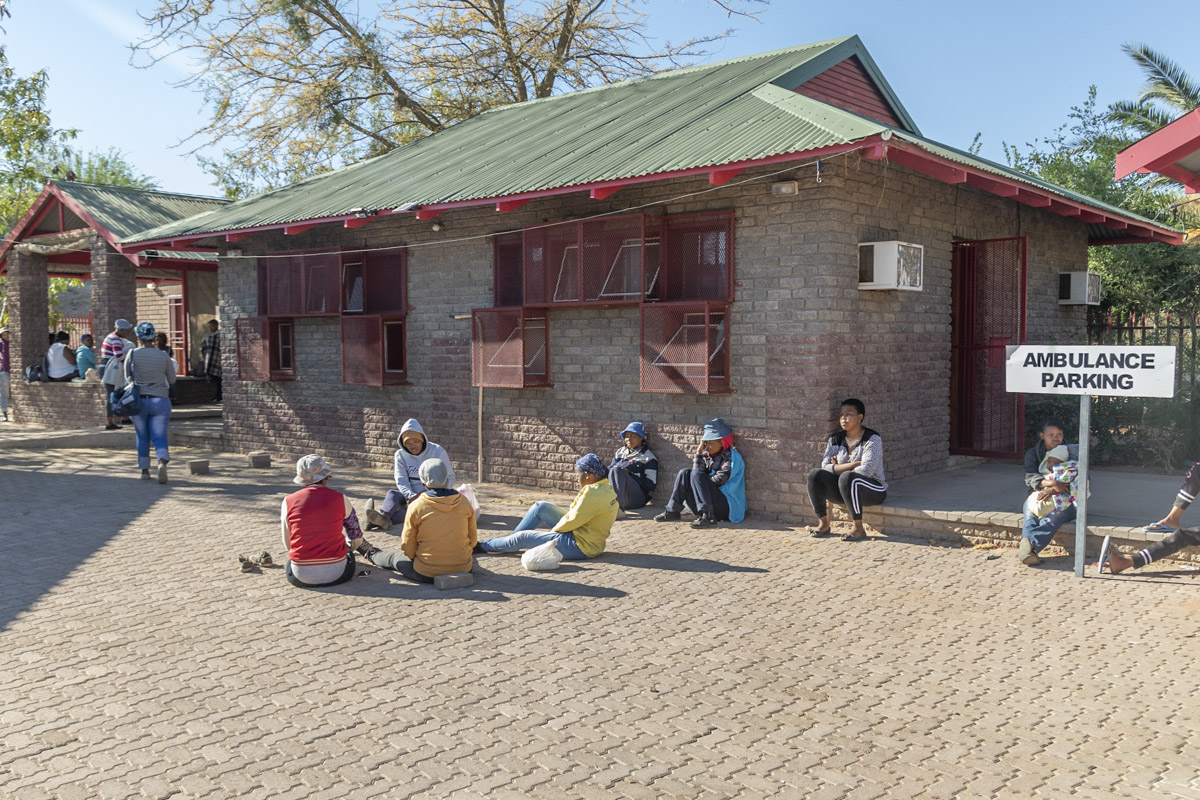 Augrabies Health Care Clinic. One of the small town clinics outside Kakamas, where patients wait on the floor for the nurses to arrive. Photo: Thom Pierce

Sutherland has no doctors after the last state doctor left at the end of November. A professional nurse, Marguerite Jordaan, who recently retired after 29 years in the service, said it has been extremely challenging to deliver a 24-hour service at the 24-bed Community Health Centre which includes an eight-bed maternity unit. What does she do when she has a serious case and there is no ambulance or doctor? “You pray a lot,” she smiles. “You do what you can and you hope for the best.” The Community Health Centre relies heavily on the nearby Southern African Large Telescope (SALT) operation to sponsor crucial basic medical supplies such as bandages, syringes, suture material and plasters.

About 110km on a corrugated dirt road east of Sutherland, Fraserburg also has no doctor and there have been reports of several nursing staff simply not pitching for work on some days. A nurse told Spotlight that referring patients to hospitals was a massive challenge with ambulances often forced to transport up to eight patients to Calvinia or Upington. She recalls instances where Calvinia could not take on any surgical cases as they had no gauze. The nurse also said there have been times when the depot in Kimberley had no insulin and no drugs for epilepsy.

Both the outside and inside of The De Aar hospital building looks like a shiny pamphlet. The hedges that line the driveways are trimmed, the signs on the hospital are gleaming in the afternoon light, the security guards at the gate are many, there isn’t any litter in sight — just paved walkways and seemingly unused red benches.

About a year ago, the old De Aar hospital was suddenly closed and almost overnight, the entire hospital was moved a few kilometres down the road to the new facility.

The old facility is now an empty lot, guarded day and night by two security guards.

Over five or six months, thieves have looted old the hospital of what furniture was left. Pieces of the ceiling have been ripped out, corrugated iron roofing and other equipment ripped from the building. Everything that is possibly worth anything has been removed.

The corridors are littered with patients’ files, sealed syringes, used syringes, medication packets, floppy computer discs and other debris. Some say that the old hospital was supposed to be turned into a nurse’s home, but that the delay meant the thieves could take what they wanted.

Now De Aar, famous for being home to one of the country’s most important railway junctions, is home to what appears to be two mostly empty facilities, and a story that just doesn’t add up.

Spotlight visited an ambulance base in Keimoes which is basically a rundown little office with a collapsing ceiling and electrical extensions running across the floor. A manager who spoke to Spotlight admitted that “the ambulances are more broken-down than running”.

From the outside, Kakamas hospital is picture perfect. The image of the hospital is delicate, so delicate that if one looks a little bit harder, the hospital starts to unravel, from the inside out. There are session doctors in the hospital, but the theatre has been locked for years. There are doctors, but there are no oxygen tanks. Staff tell us there are no IV drips and very few drugs and other medical supplies.

They tell us that nepotism is rife, that friends are appointed to senior positions with no qualifications, that HR functions are a joke. Community activists, hospital staff and NGO workers spoke openly about the dysfunctional state of the hospital.

“There is corruption everywhere,” says NGO worker Caroline Booysen, “The only people that get help here are relatives or friends,” she said.

We are led down a green passage, with yellow doors alongside it. At the end of the passage are two doors, with the words “Theatre” painted on a panel above the door. At first glance, all seems well until you notice the big golden padlock dangling on a latch. The theatre is closed. And has been so for months. DM

While Spotlight is published by SECTION27 and the Treatment Action Campaign, its editors have full editorial independence – independence that the editors guard jealously. Spotlight is a member of the South African Press Council.