Battleground Gauteng: ANC holds on by a razor-thin marg...

Battleground Gauteng: ANC holds on by a razor-thin margin as count continues 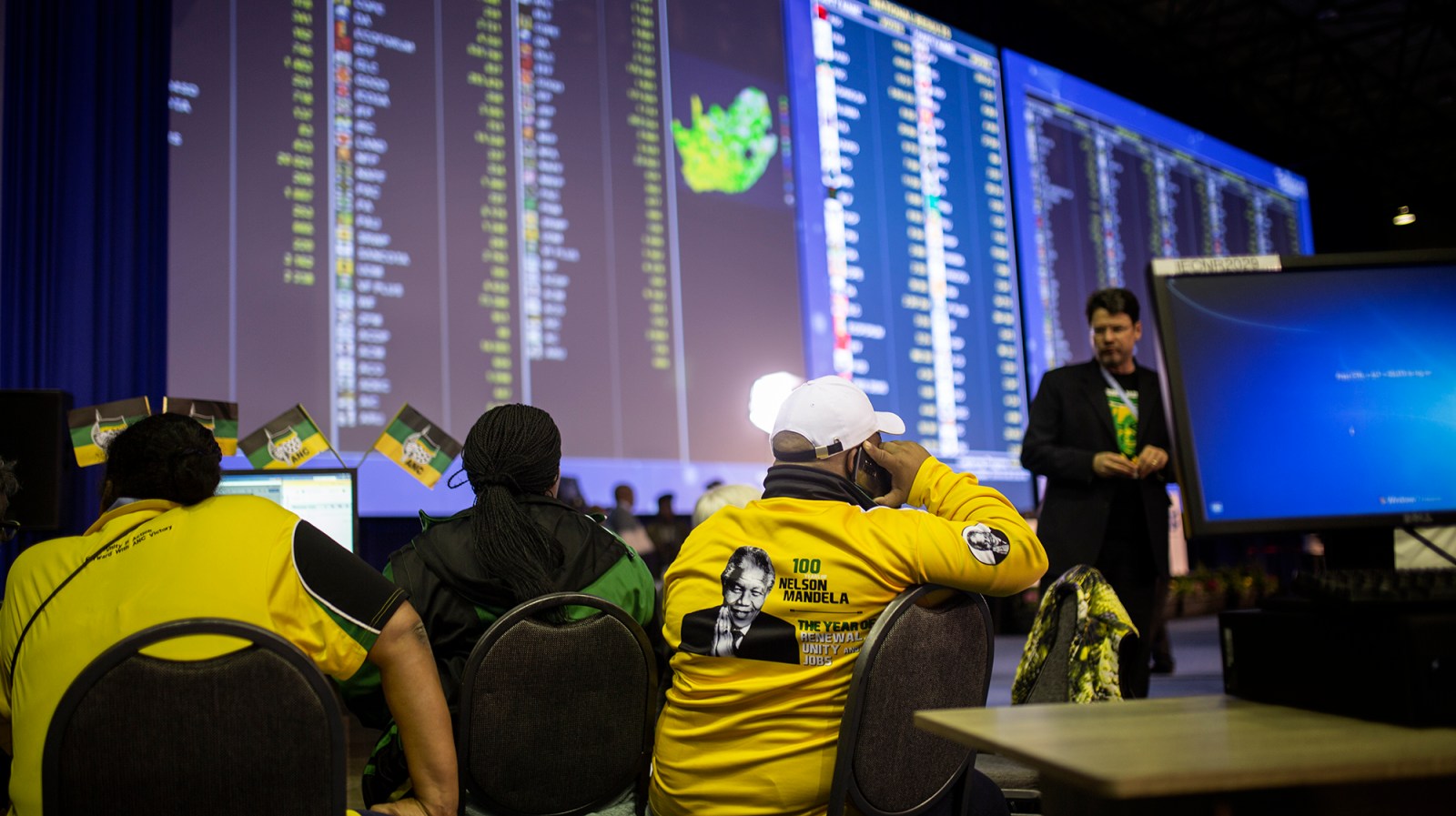 ANC officials keep an eye on the results board at the IEC National Results Operation Center (ROC) on Thursday 9 May 2019. Photo: Leila Dougan

With half the votes in Gauteng counted on Thursday night, opposition parties were still hopeful the ANC might fall under 50%, but the ruling party looked like it might just scrape over the line to keep its majority in the country’s economic heartland.

ANC deputy secretary-general Jessie Duarte was watching the results come in from Gauteng on Thursday night, waiting for the “Soweto surge” that could solidify the party’s majority in the most contested province in the 2019 general elections.

With 51% of Gauteng results captured, the ANC was leading in the province with 51.07% of the vote at 9pm on Thursday. Opposition parties still hoped the province would be hung, making a coalition necessary, but prediction models suggested the ANC would retain its majority by a razor-thin margin.

“We’re confident we’ve passed the golden 51%. That’s what they say in electioneering science — once you’ve reached that point it’s very difficult to drive you back, but we’re confident we’ll do well in Gauteng,” said Duarte at the IEC’s national results operation centre in Tshwane.

At around 6pm, with results still coming in from Gauteng’s metros, Intellidex and Daily Maverick analyst Peter Attard Montalto predicted the ANC would win 50.56% in the province, the DA 26.63% and EFF 14.99%. At the same time the Council for Scientific and Industrial Research predicted similar figures, but with the DA taking 27.5%.

“The night is young,” she warned.

The DA was able to form coalitions and govern Johannesburg and Tshwane after the 2016 local government elections, with the support of the EFF, which voted with the coalitions on a case-by-case basis. The DA then turned its attention and resources to do the same in Gauteng.

A weak performance in Gauteng would be a significant blow for the DA, particularly to its leader Mmusi Maimane and premier candidate Solly Msimanga, which held its key election rallies in the province and moved its head office from Cape Town to Johannesburg after the 2016 elections.

Standing near the large IEC results screens, Duarte was cautiously optimistic. While her party was still trailing its 2014 result, the ANC was out-performing pre-election polls that suggested the province might be governed by a coalition after the election.

She said the ANC’s door-to-door campaign suggested there was a “positive swing back” in the year-and-a-half since President Cyril Ramaphosa was elected to lead the party, embarked on an ANC renewal campaign and launched commissions of inquiry into State Capture, including at SARS and the PIC.

The main opposition parties were still hopeful the ANC might win less than 50% of the vote and the province would be governed by a coalition.

Selfe said it would be an “interesting result” if the ANC was forced to work with a coalition partner and said the party often governed better in coalition administrations. The Freedom Front Plus, Inkatha Freedom Party, African Christian Democratic Party and African Transformation Movement were trailing the EFF in the provincial vote on Thursday evening.

On the DA’s lacklustre performance in the province, Selfe said:

“I think we will have to interrogate that.”

Speaking at the IEC’s provincial results centre in Johannesburg, DA MPL Ashore Sarupen said the number of black DA voters had increased across the board.

“Black votes have doubled in places like KwaThema. We went from 3% to 7%.”

Back in Tshwane, EFF chairperson Dali Mpofu said his party was relaxed as it had significantly improved on its 2014 results across the country. He was still hopeful the ANC might fall below 50% in Gauteng.

“It would bring an interesting dynamic if Gauteng was hung. Obviously by how much it’s hung would then determine who has to talk to who,” said Mpofu.

Freedom Front Plus has been the surprise of the 2019 elections and by Thursday evening it had tripled its share of the Gauteng vote compared with 2014, up to 3.6%.

The party campaigned on a hard line against issues such as land expropriation without compensation and appeared to benefit from conservative white voters shifting away from the DA.

“I don’t want to sound arrogant, but we worked very hard in educating the voters to make them understand that the Freedom Front Plus is the last bastion for these elections. It was now or never. So we had to work to make people aware of what they were voting for, especially the minority parties,” said the party’s Amanda de Lange.

Reports of voting irregularities, including double voting and a lack of voting materials at some polling stations, have marred the elections. IEC leaders have assured the country that the elections are credible but have taken steps to ensure people believe the process is legitimate.

The IEC’s Gauteng provincial deputy manager Ledimo Nthejane said there had been grievances raised by political parties, but said:

“Where political representatives raised issues with the Electoral Commission we investigated those matters and provided political parties with the necessary information of the investigation.”

Nthejane told Daily Maverick that where there was reasonable evidence that someone had voted more than once “the matter was referred to the South African Police” and that “investigations are currently underway”.

With results still coming in, the situation in Gauteng is expected to be clear by Friday morning. DM