ANC holds firm in less contested provinces but its supp... 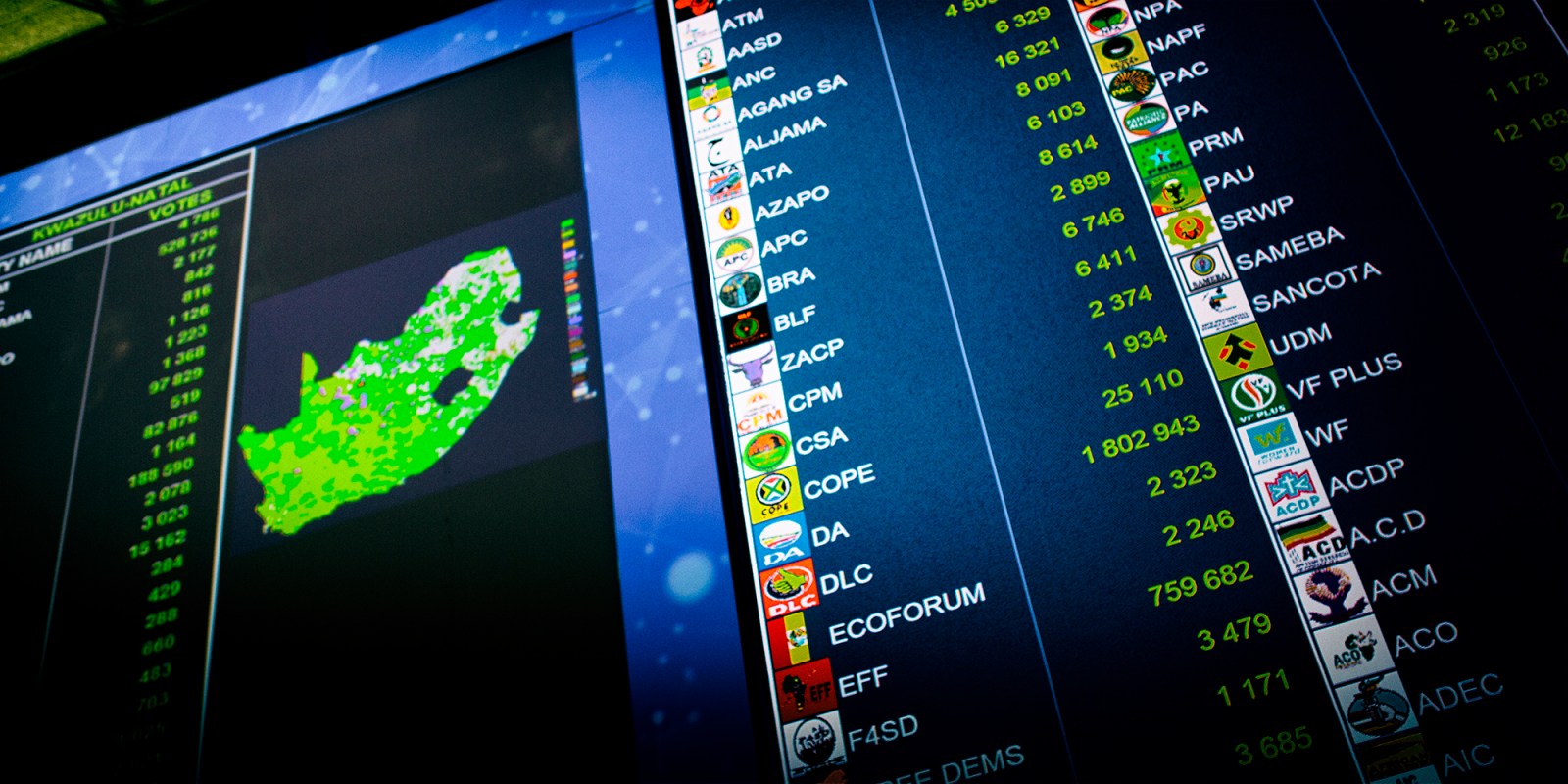 Results continue to come in at the National Results Operation Center (ROC) in Pretoria, Thursday 9 May 2019. Photo: Leila Dougan

Elections have left the ANC poorer nationally and in Gauteng – and the Western Cape is long since lost – but in the provinces with large rural constituencies, it’s mostly still king. All its%ages are down because some voters strayed, but mostly, those who were unhappy with the party appeared to have stayed away.

In the provinces, elections results centres are emptying out as the vote count wraps up. Slowest to finish are Limpopo – where only about 70% of the votes were counted by noon on Friday, more than a day and a half after the close of the polls – and the Free State, where 28% of the votes were still outstanding.

Trends in provinces reflected national trends with the ANC’s share of the vote down – there are massive service delivery problems in many municipalities, where residents often lack basics like clean water, and infighting and corruption within the ANC remain a problem – while the EFF has gone up. The DA, similarly, appears to have shed votes to the FF Plus, which had a good election overall, gaining seats in legislatures where it wasn’t represented in the past.

Mpumalanga and Limpopo are once again a mainstay for the ANC, and although the party’s days of getting over 80% in these provinces seem to be over, it will still dominate the legislatures there.

Limpopo (with 69% of the votes counted)

Even though 30% of the vote count was still outstanding in Limpopo and this could still present with drastic swings depending on whether these votes are in voting districts in, say, Seshego, where the EFF is strong, or in an ANC area. So far, the ANC garnered 75.5% of the votes in President Cyril Ramaphosa’s home province, down from 78.6% in 2014. The EFF is up by just under four%age points to 14.17%, while the DA dropped from 6.48% to 5.57%. The FF Plus, which wasn’t a factor before, looks set to get a seat or two in the legislature with 1.57%.

Mpumalanga (with 94% of the votes counted)

There was much worry about the Bushbuckridge Residents Association (BRA), which was formed in 2014 by former ANC members. Campaigning in the weeks ahead of the election by Deputy President David Mabuza (also former Mpumalanga premier) and Ramaphosa appear to have slashed the BRA’s vote almost in half (from 15 386 to 8 784). It looks unlikely to get a seat in the legislature. The DA has given up its spot as the biggest opposition party to the EFF, dropping from 10.4% in 2014 to 9.83%. The FF Plus looks set to enter the legislature with one seat at 2.44% of the vote.

North West (with 99% of the votes counted)

Fierce infighting after the sacking of premier Supra Mahumapelo last year appears to have cost the ANC close to 150 000 voters, with its share of the vote dropping from 67.39% in 2014 to 61.81%, which is more or less on par with what the party’s provincial task team members said they expected. The EFF gained 32,000 votes in the province, and its%age share jumped from 13.21% in 2014 to 18.62%, which means the North West will be the party’s biggest province in percentage terms.

Black First Land First got only 662 votes in the province that is the home of its founder, Andile Mngxitama.

Free State (with 72% of the votes counted)

The%ages could still change when the rest of the vote count is done.

Eastern Cape (with 95% of the votes counted)

In Nongqunga’s home province the ATM had its strongest showing with 1.52% of the vote. Over 28 000 people voted for the party here.

The ANC has dropped to below the 70% mark, which this home province of former presidents like Nelson Mandela and Thabo Mbeki maintained till 2014. The ANC looks set to have lost more than 200 000 voters here. The DA could also have lost about 50 000 voters here, with its%age dropping from 16.2% in 2014 to 15.18% in these elections. The UDM is the biggest loser – from 6.16% of the vote to 2.66%. Part of this could be due to losing votes to the ATM, but also possibly because the UDM was perceived as less than clean following the drama in the Nelson Mandela Bay metro, where it cooperated with the ANC to unseat DA mayor Athol Trollip last year. UDM mayor Mongameli Bobani replaced him. The DA accused him of being corrupt, and of cooperating with the same allegedly corrupt administration that the UDM tried to clean up in the metro in the first place.

The EFF is also making some inroads into this largely conservative province, more than doubling its share of the vote from 3.48% in 2014 to 7.74%. Founder of the Socialist Workers Revolutionary Party Irvin Jim has again failed to capture the imagination of the masses in his home province, but he did manage to get just under 4,600 actual votes here.

Northern Cape (with almost 100% of the votes counted)