We should be grateful for boring elections 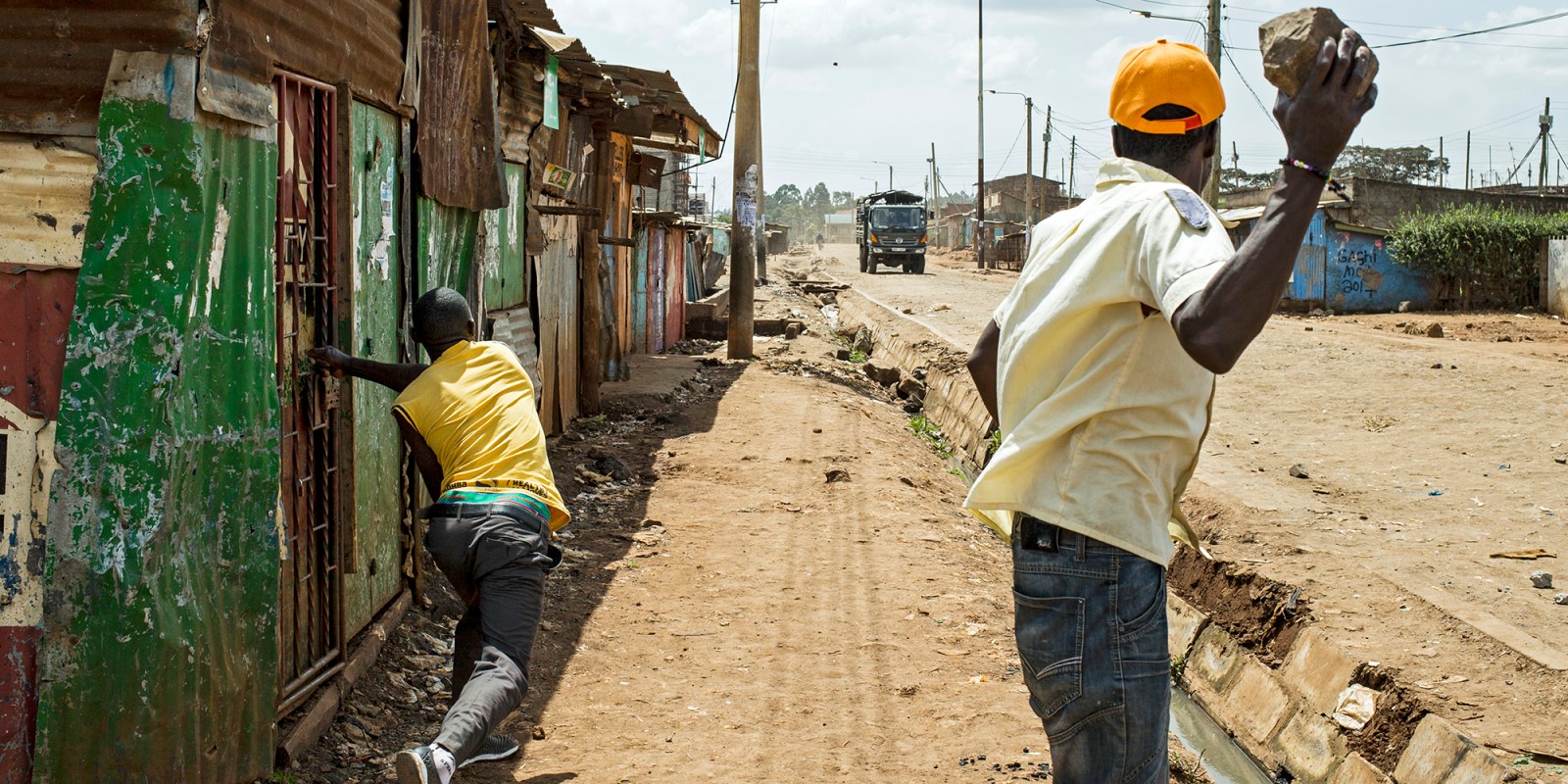 Supporters of the opposition coalition, the National Super Alliance (NASA) led by presidential candidate Raila Odinga, throw stones at police on the streets of Kawangware slum in protests across Nairobi, Kenya, in October 2017. (Photo: EPA-EFE/Kabir Dhanji)

Politics junkies and ordinary voters alike have been yawning that these elections have been the most boring to date. But having an election that offers a thrill a minute is not always a good idea.

There was this hot guy on Kenyan television a few days after that country’s general election on 8 August 2017. His name was Ezra Chiloba and he was the chief electoral officer. It fell to him to read out all the results in all the constituencies. My female election observer companions and I took to making mirth about the man nicknamed “Chilobae”.

But that election was no laughing matter. Chiloba was suspended and then sacked under a cloud soon after, and the rigged presidential election was annulled in an unprecedented and groundbreaking high court ruling.

That was an exciting election alright. There was the murder of the electoral commission’s head of information, communication and technology, Christopher Msando, his body showing marks of torture and his finger cut off. There was talk that the fingerprint was needed to gain access to the electronic results.

Kenyans say the electioneering never really stopped, and just more than a year after President Uhuru Kenyatta’s inauguration for a second term, the country is in full elections mode again.

That’s an exciting election for you.

Just across our border, in Zimbabwe, in August 2018, there was much buzz about the first election following the ouster of former president Robert Mugabe. Opposition parties thought their time had come at last, and the campaigning was a little less tense than previously. But barely 24 hours after the polls had closed, there was smoke in the Harare CBD as protesters burnt banners, and soon the army moved in with live ammunition. There was blood on the street and opposition supporters and leaders appeared to have been targeted for torture and harassment. Opposition leader Tendai Biti tried to leave the country and was arrested at the Zambian border. Things aren’t exactly looking up for Zimbabwe’s economy right now.

So much for exciting elections.

Then there was the election in the Democratic Republic of Congo, which eventually took place at the end of last year after a two-year delay. Such were the upheavals that, once a date was eventually set for 23 December 2018, there was another postponement – of about a week – after 8,000 voting machines were burnt.

The voting happened amid an Ebola outbreak in some areas, as well as ongoing fighting in the northwest of the country and clashes between opposition supporters and the police in Kinshasa. When the results were announced in the early hours of the morning, after some postponement, there were questions about their credibility.

Nothing boring about these elections.

Not so long ago, South Africans were treated to thrilling elections too. It was especially thrilling in 2009, when Jacob Zuma was about to become president. Eight years after corruption allegations were levelled against him, and a convenient two weeks before the polls, prosecutions boss Mokotedi Mpshe dropped corruption charges against Zuma. It was only after billions of rand in tax money had been redirected to private pockets and millions had become disillusioned with or alienated from the ANC, that these charges were reinstated.

It was back in those days that then ANC Youth League leader Julius Malema had expressed preparedness “to take up arms and kill for Zuma”. The ANC splinter Congress of the People was an unknown variable and posed the first real threat to the governing party, and election campaigning was particularly personal and vicious. Cope convinced a million people to vote for it, but the party soon turned into a damp squib riddled with infighting, and today is desperately sidling up to Afriforum in the vain hope of scoring more votes.

In 2011, Malema called then DA spokesperson Lindiwe Mazibuko a “tea girl”. Electioneering in South Africa was firmly in the gutter, and newspaper sales were doing well. It was exciting. With the birth of the EFF and its participation in the 2014 elections, things got even hotter. Malema’s campaign was on steroids and no ANC elder could reign him in. The EFF was disruptive and sometimes violent, and often the ANC blocked them from having meetings in stadiums or halls by double-booking or by drowning their gatherings in song. The Red Berets posed even more of a threat to the ANC than Cope.

By 2016, the municipal election had turned into a bit of a referendum about Zuma. The momentum against him had picked up and the ANC lost three metros as urbanites came out to vote in their thousands. Race was a big election issue as Zuma went low with hints that the DA was a white party for which one could not vote.

In 2019, though, President Cyril Ramaphosa went high. His election campaign has been polite and about nation-building, not fanning racial divisions. During his year as president, he actually did things, and he went around the country with his offering to communities. He had already wooed overseas investors at a conference, where pledges were made, and he promised even rural backwaters that they would see a share of this.

Having started to fix the broken law enforcement institutions, and with the Zondo Commission of Inquiry into state capture under way, Ramaphosa promised that the corrupt would be wearing orange overalls. He said school children would get tablets and would be equipped for the fourth industrial revolution. And so on and so forth. There were some references to the smallanyana parties that yapped like brakanyanas, but it was all very gentlemanly.

Even Malema’s rhetoric was much the same as usual, with the most gutter campaigning coming from fringe elements such as Black First Land First.

There are likely to be shifts following today’s elections, but they will be minimal and incremental. More predictability in politics leaves more time for thinking about governance, and about how to build the country again. We should be grateful for boring elections. DM