This is the winter of our discontent: Jobless and despe...

This is the winter of our discontent: Jobless and desperate in Juju Valley 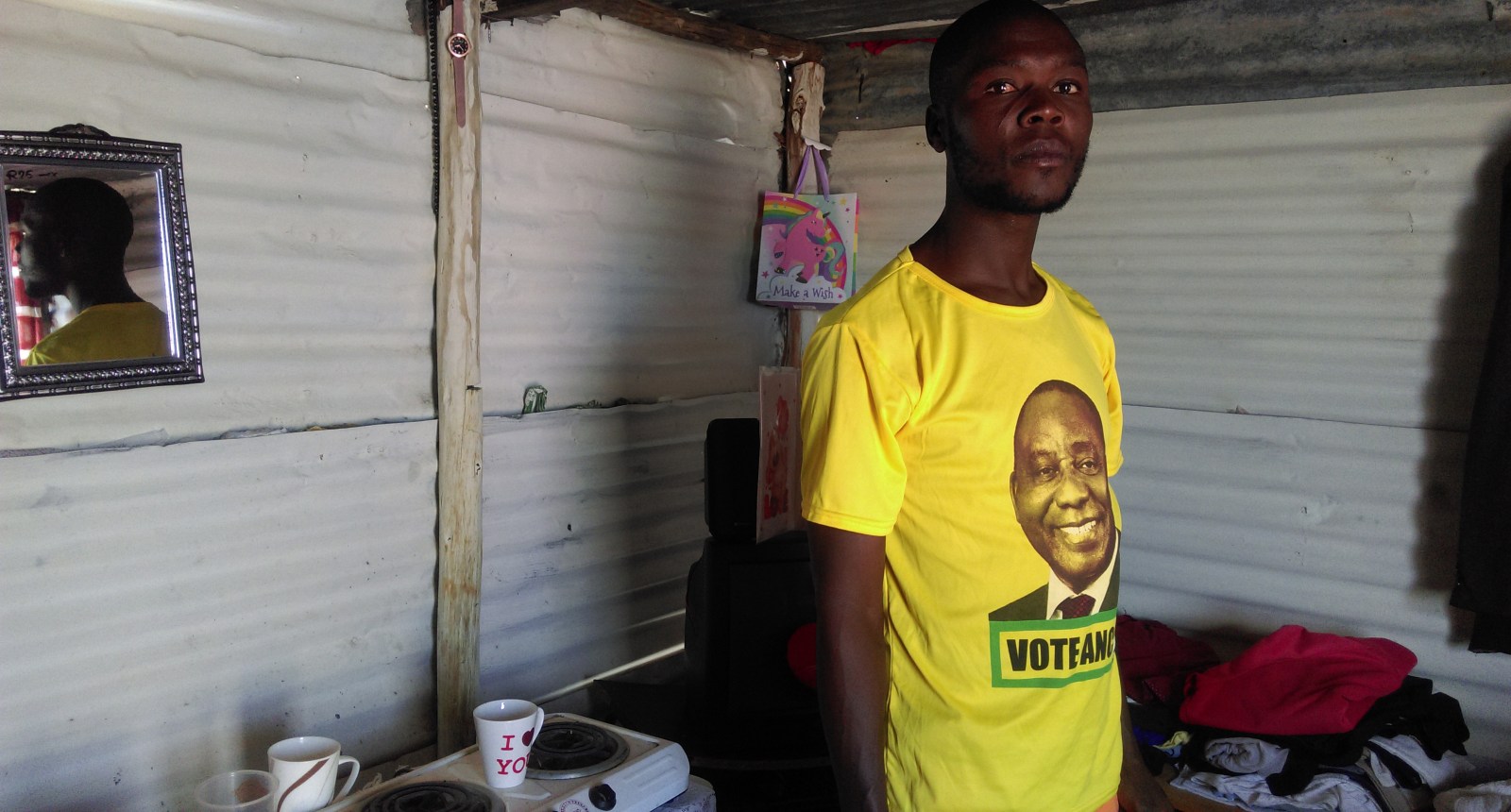 Much of South Africa’s political uncertainty lies in the broken hopes of young people who have been alienated by the desperation of their lives. In Juju Valley outside Polokwane, one man’s story is the story of our nation.

When EFF leader Julius Malema made a call for land occupations in 2016, a group of people in Seshego, a township in Polokwane Local Municipality and Malema’s home town, who had been waiting for housing, took heed of the command and invaded private land in Ward 13.

At the time, Malema was facing charges of contravening the Riotous Assemblies Act in the Bloemfontein High Court for allegedly inciting public violence following his calls for land grabs in 2014 and again in June 2016. The land in Ward 13 belonged to the Brener family, who had emigrated to the United Kingdom following the death of the landowner.

According to the 2011 Census, Ward 13 is 2.6km² in size and has a population of 12,862, with an average age of 26; 15% of households do not have an income. It is difficult to know by how much that number has risen as there has not been a more recent census; there is a 1.46% annual rise in population in Limpopo.

Malema’s call for land grabs came shortly after the EFF had won Ward 13 in the August 2016 local government elections. Following the win and the orders from the commander-in-chief, EFF councillor Oupa Ramaphoko led people to settle on the unoccupied private land in October that year.

Ramaphoko himself moved with his family into a corrugated iron shack. He is celebrated as the father of the informal settlement, which has more than 400 households and roughly 200 shacks and has been named Juju Valley, in honour of the EFF president.

The group quickly turned into a community determined to make a new home. A Facebook group was started for Juju Valley Residents to inform them of upcoming plans to bring in electricity and water, about regular meetings and when there was a funeral.

A patch of land was levelled for a soccer field for the local team. Beside the field, poles with rings at the top were erected for a netball pitch. There were even plans to build a community hall.

In 2017, a few months after the initial land occupations, 31-year-old Jan Makgoba moved into Juju Valley. Makgoba had lived in another section of Ward 13, in a two-bedroom house with his mother, his two sisters and their children.

His mother is a domestic worker for “some family in town” and his sister Katherine, who has four children, works at a tavern. His other sister, Annah, who has three children, is unemployed.

Before moving to Juju Valley, Makgoba slept on a couch in the living room, his sisters slept in one room and his mother slept in the other room with the children.

Makgoba had a job, although unemployment was at 27.7% – at the time the highest ever recorded in the country. He worked in construction and earned R280 a day, building a tar road from Madiba Park in Seshego to Hospital View as part of the Polokwane Integrated Rapid Public Transport (IRPT) project.

The work was tough under the scorching Limpopo sun, but at least he had a job, Makgoba says.

In a month, working from Monday to Friday, he would get paid R5,600.

Deciding to move out of the cramped space at his mother’s house, Makgoba followed others who had settled on private land. With the money he had earned on the road project, he bought material to build himself a small shack in Juju Valley. He saved up for a bed, then a two-plate stove, then a TV and music system.

Every month, he sent R1,500 to his mother. But when the road construction ended he was again unemployed. Without a degree or any kind of qualification, Makgoba has found it very difficult to get a job.

He dropped out of school in 2010 when he was in Grade 10. Both his parents were unemployed and it was difficult for him to spend long hours at school on an empty stomach.

“Sitting at home was different. I saw people going to school, some are working now,” says Makgoba.

His father sent him to live with his grandmother because they could not feed everyone in the house. His grandmother earned a pension and was able to at least buy some food.

Makgoba says his father told him: “I’m sending you there because of poverty.”

Shortly thereafter, his father died in a car accident and his family joined the 50% of households in Ward 13 that are led by women. His mother went to find a job as a domestic worker.

He can’t remember the last time his father had a job before he died. His uncle, after whom Makgoba was named, lives in the neighbouring township. He too does not have a job.

Determined to break this cycle of unemployment in his family, after he left school Makgoba worked at a local car wash. If lucky, he would wash three cars a day. The customers paid him R40, of which he would give R25 to the car wash owner; he would keep R15 for each car he washed.

Makgoba says the job was too slow and the money was “just too little”. He eventually left, hoping to get a better job.

Makgoba has a scar running across his face, got during “those days” when he was behaving badly, he says. When he was unemployed, he was “a constant drinker”, which would lead him to fight with his mother.

One evening, while walking home with some friends from the Catch-Up Zone, a local tavern, he was mugged by a group of seven men. His friends ran away as soon as they saw the muggers walk towards them, but Makgoba recognised some of them as they were known in the community as “nyaope boys”. He says he wasn’t scared.

He tried to fight them while they searched his pockets, but there were too many of them. They took his phone and the little money that he had.

Makgoba was “overcome by anger”. He felt overpowered and wronged, he says, and he went home to get something with which to fight them. He found a spade and returned to get revenge.

In his rage, he thought of his father who had died, he thought of how he dropped out of school and the pain of being unemployed. He found the group sitting in a circle, drinking, at the Catch-Up Zone. Running straight for them, he swung his spade, hitting one in the head.

The others attacked Makgoba. He was kicked, punched and hit in the face with a bottle. He lost consciousness and only remembers waking up while being pushed into the hospital. He felt blood running across his face.

“They beat me like a pig,” he smiles, his head lowered.

At the hospital, the nurse told him he was lucky that someone had intervened and stopped the fight.

He spent two days in hospital and was still angry when he was discharged. He wanted revenge more than ever. His mother begged him not to go looking for them. “It was rough. I was feeling like there is no life,” says Makgoba.

Sadag notes: “The relationship between depression and unemployment poses a unique problem – the more you can’t find employment, the more depressed you become, the less motivated you are to seek employment.” This “continues the unending spiral downwards to the dark feelings of despair, loneliness, worthlessness and possibly even suicide”.

Makgoba’s neighbour in Juju Valley is also unemployed. An elderly couple who live opposite him get social grants and support their daughter, who is looking for a job. Only one of his neighbours on the right works, as a packer at Golden Chickens.

He spends most of his days cleaning up in his shack, says Makgoba. He wears an ANC T-shirt to clean, brought by a friend from an ANC rally when President Cyril Ramaphosa visited Seshego on 16 April 2019.

Makgoba says politically he is “neutral” and he is “not going to vote”.

“When it (Juju Valley) started there were meetings but not any more, they have stopped calling meetings.”

In September 2017, the EFF Councillor put in 10 taps for water throughout the settlement. Since then nothing has been done. Makgoba gets electricity from the neighbouring community.

This puts a strain on the people living on the fringes of Polokwane who receive no support from their local representatives.

Makgoba has a four-month-old daughter. She lives with his girlfriend and her mother. She too does not have a job. He visits her every day and hopes to find work soon so that he can support them.

He says what he would really like to do is open a supermarket in Juju Valley so that the people who live there don’t have to go far to do their shopping. DM