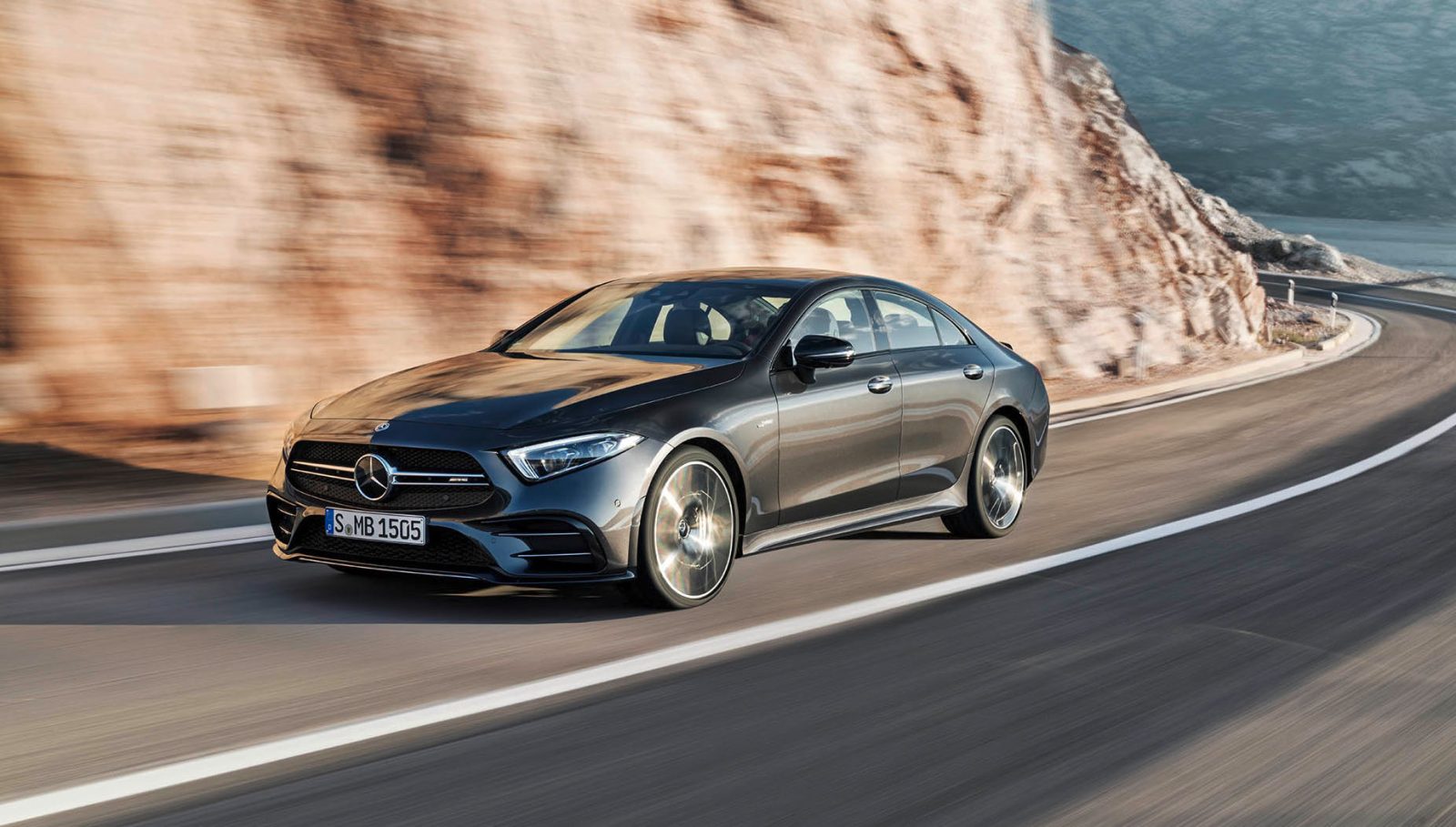 Mercedes-AMG 63-badged models have typically been powered by the aristocratic performance marque’s venerable twin-turbo V8. But now a new generation of smaller, more efficient AMG engines is being rolled out. Can these AMG ‘lite’ powerplants still deliver the dynamic goods?

There are two important aspects to the debut of the latest Mercedes-AMG CLS 53. First, it’s the third, all-new iteration of the car that pioneered the four-door coupé concept back in 2004. Second, it heralds the arrival of an all-new AMG engine.

AMG and Mercedes-Benz performance models have been synonymous since the late 1960s, when two ex-Daimler engineers started a tuning shop focused on transforming Mercedes-Benz models into hardcore tar-burners. 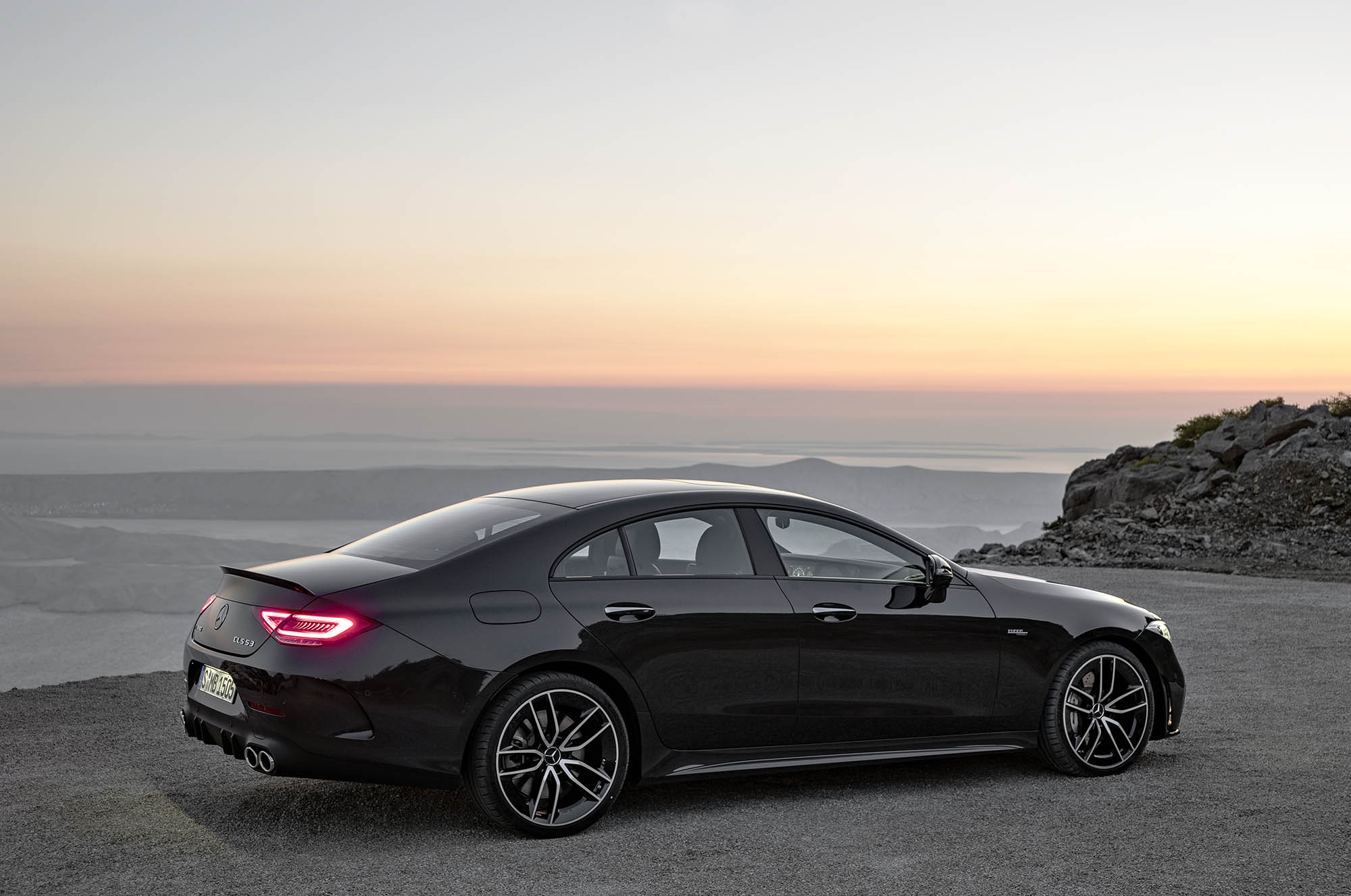 Today, AMG is a wholly owned subsidiary of Mercedes-Benz and is responsible for developing and engineering the luxury brand’s performance models: Hairy-chested muscle machines with a reputation for unruly, challenging – and thrilling – dynamics.

The advent of the new Mercedes-AMG CLS coincides with the debut of a new AMG engine, as signified by the CLS 53 nomenclature. It’s not just a scaled-down version of the previous 63’s twin-turbo V8, but a completely different design.

The 3.0-litre in-line six-cylinder motor is 90kg lighter, a lot more fuel efficient (and more environment-friendly), and employs a raft of advanced technologies, including pairing the single turbocharger with an electrically powered supercharger. 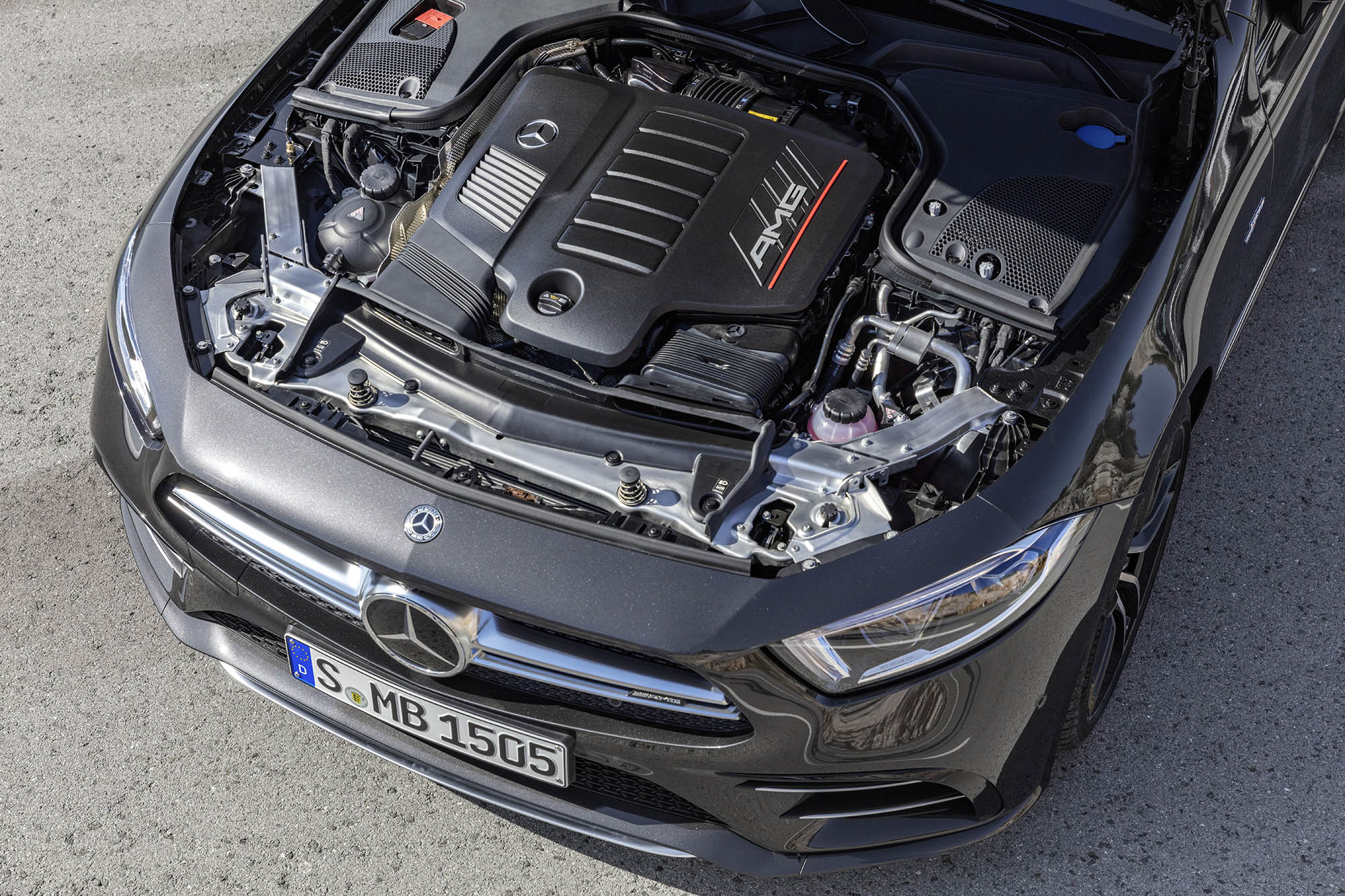 It’s clear that the engine is a response to increasingly strict emissions regulations. But the real question is whether it still deserves the AMG badge – and if it can deliver the expected adrenaline-pumping get-up-and-go.

In the new CLS, the 53-Series AMG engine delivers 320kW and 520Nm – output figures which suggest swift rather than racy dynamics. But the six-potter does have a trick up its sleeve.

That electric compressor (effectively a zero-lag, electrically powered supercharger) can instantaneously add 16kW more urge and – more importantly – a full 250Nm of extra shove. That’s a lot of on-demand kick and might just add credence to the AMG designation after all. 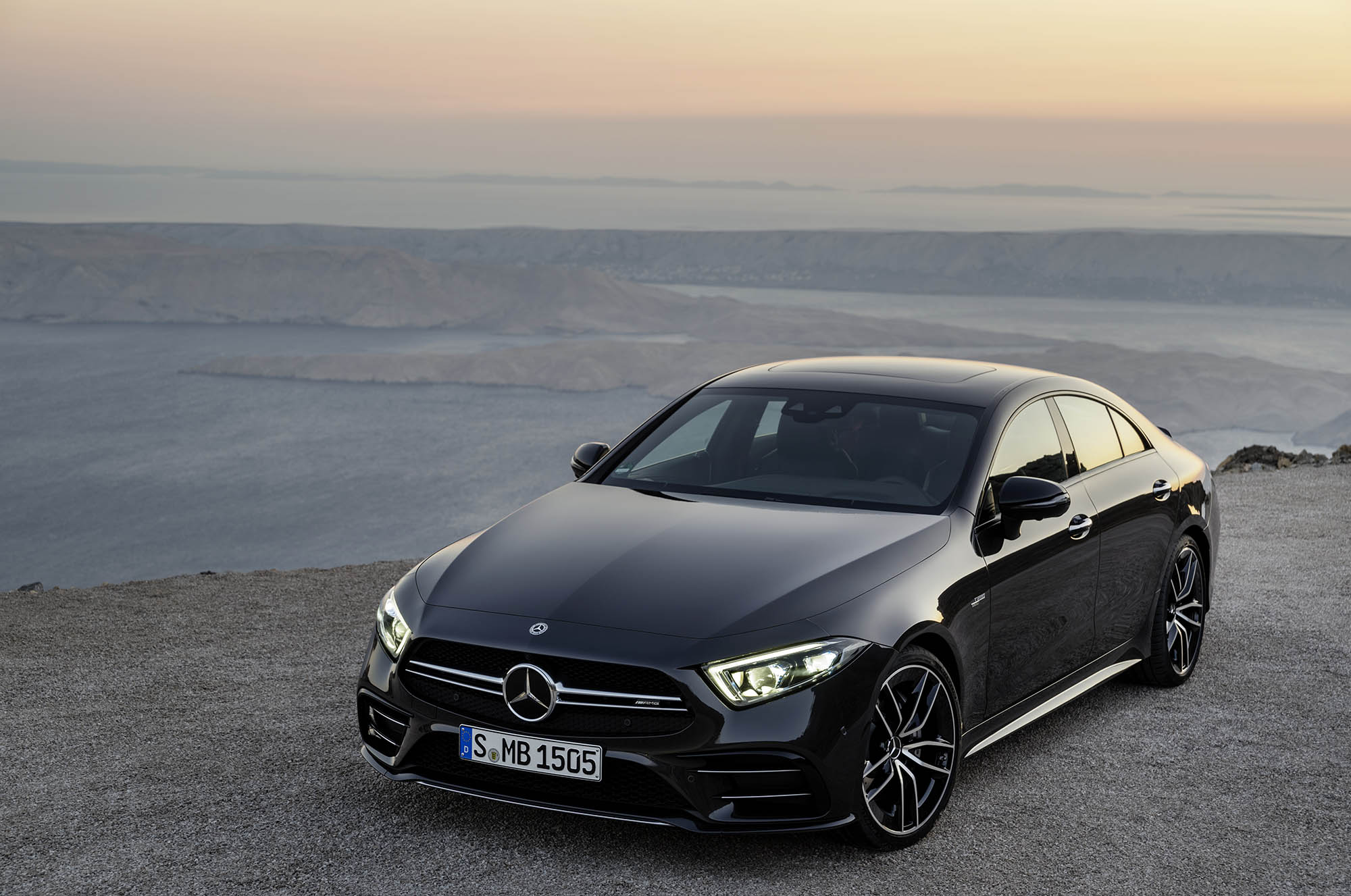 The AMG treatment goes beyond the engine, of course. In third-generation guise, the CLS is a sleek and commanding beast that is more visually balanced and aesthetically convincing than its forebears.

It’s still a big car, but the emphasis on streamlined aerodynamics at the core of the four-door coupé concept makes for an almost feline presence that carries more belligerence and visual muscle than before. 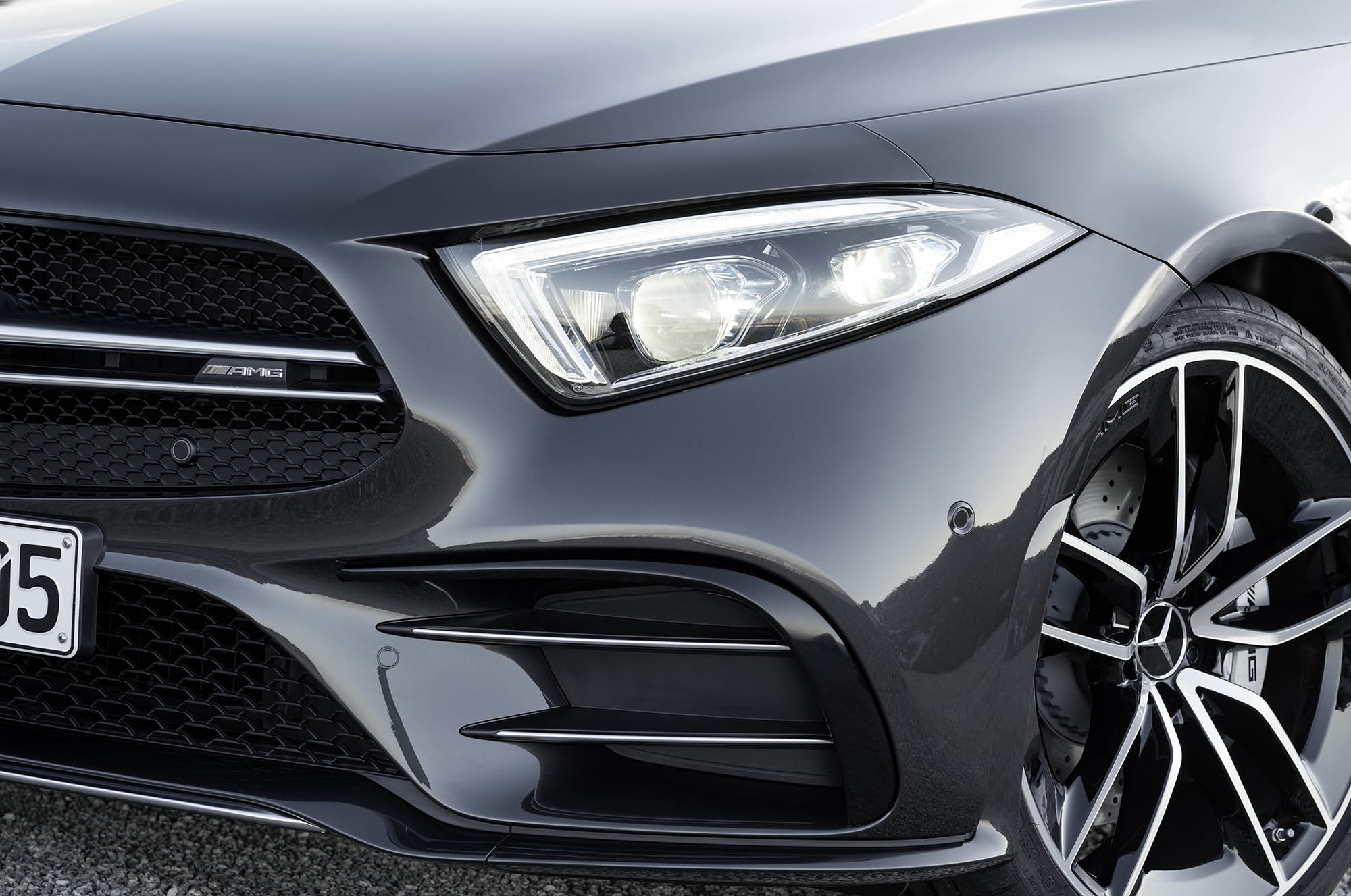 Those aspects gain further emphasis in 53 AMG guise: The lower suspension, bigger wheels and more aggressive grille treatment, together with the usual assortment of splitters, diffusers and spoilers, create the angrier visage we’ve come to expect of Mercedes-AMG models. 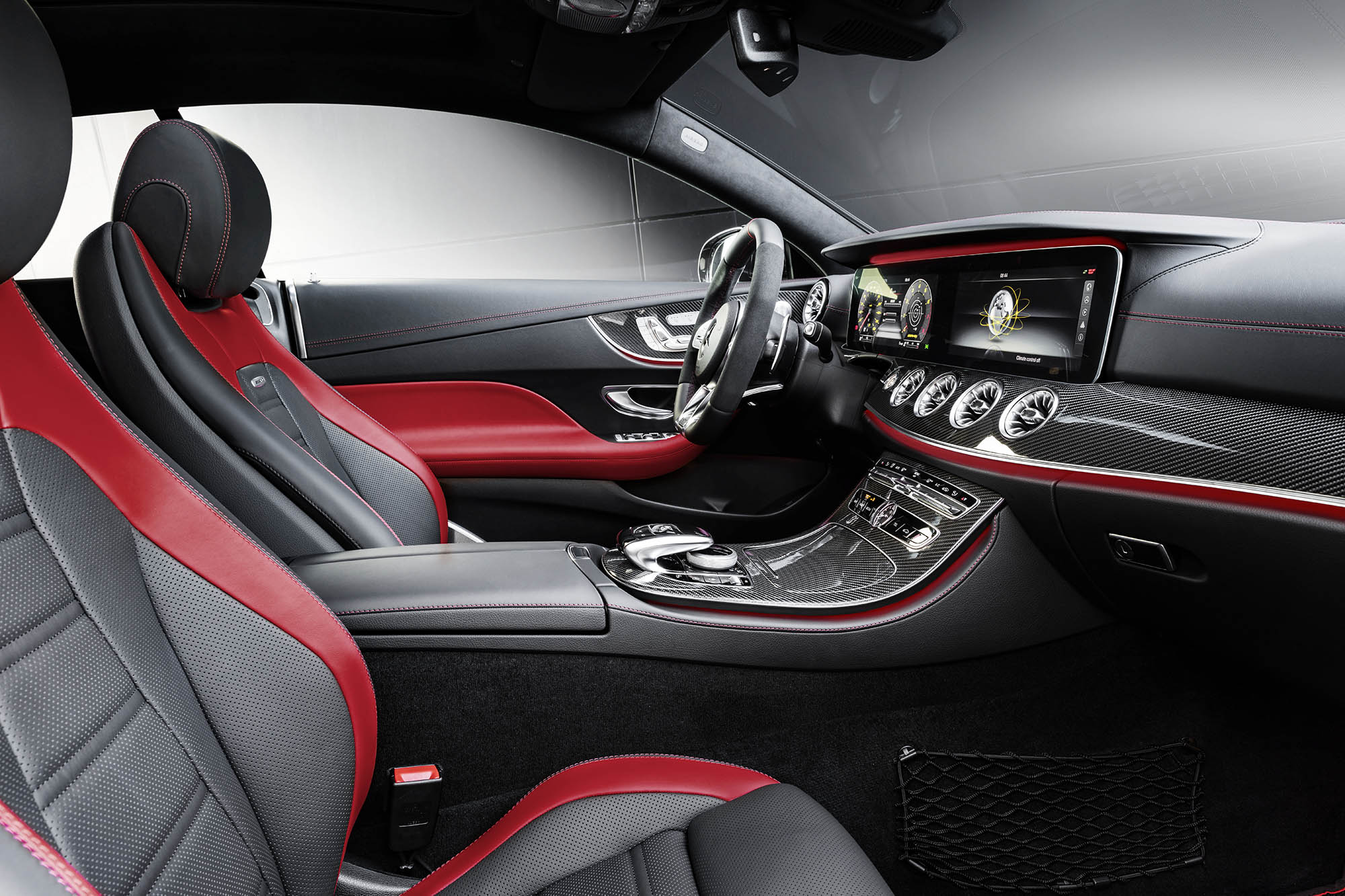 The interior is opulent and overtly sporty to the point of being ostentatious: Big-bolstered buckets cosset front occupants in kidney-hugging comfort, while the sculpted rear bench offers generous leg and headroom – the latter significantly better than before. 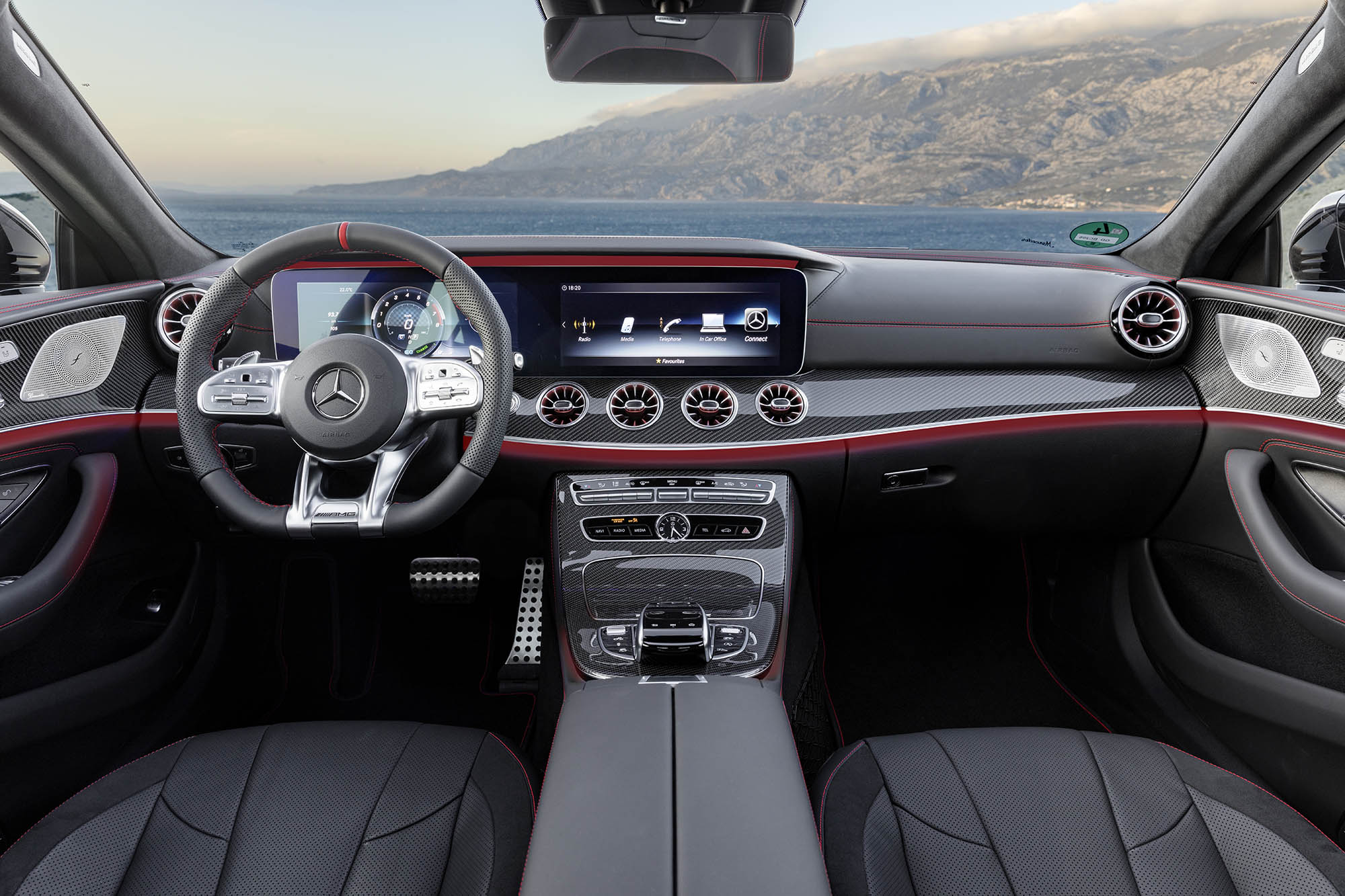 Lashings of glossy carbon-fibre detailing and swathes of hand-stitched leather are offset by the metallic finishes of the air vents and switchgear. Dual 12-inch colour screens deliver a panoramic, all-digital interface for both instrumentation and infotainment, with a vast array of user-selectable configurations.

But really, AMG cars are all about the driving experience, and Mercedes-Benz SA chose the Kyalami Grand Prix Circuit for an all-too-brief encounter with the CLS 53. During some standing-start sprints, slalom tests and track sessions, the big four-door certainly managed to vindicate its membership of the AMG club.

Let’s not forget that this is a big and heavy car. It’s a whisker longer than 5m and just short of 1.9m wide, while tipping the scales at 1.98 tons.

In that context, the AMG 53 drivetrain delivers the goods in convincing fashion: The claimed 4.5sec 0-100km/h acceleration time seemed entirely feasible, while the wieldiness of the big Merc through the slalom course was neck-wrenchingly impressive. 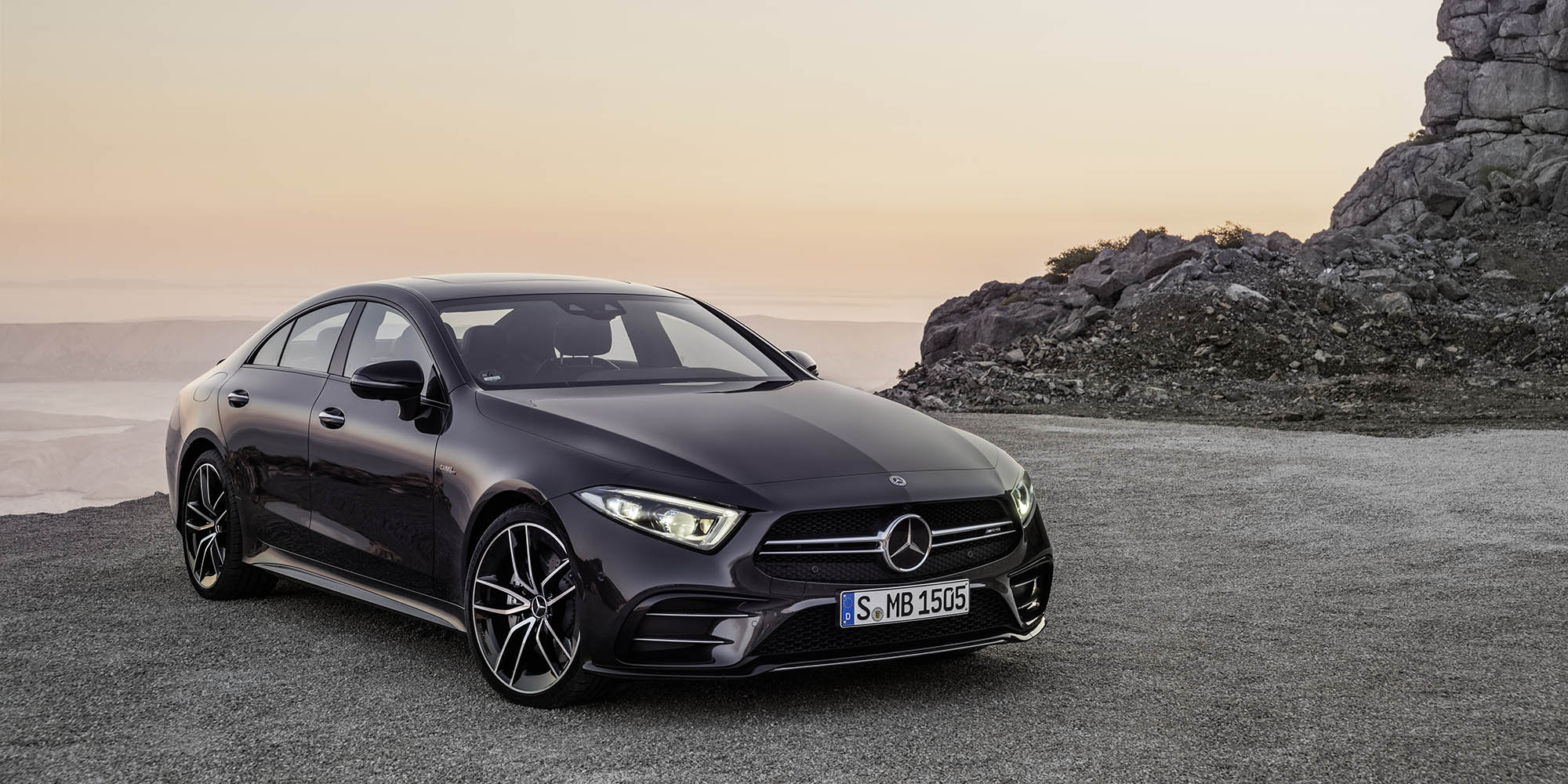 On the track, the CLS 53 showed off immaculate composure, even when pushing into corners hard and carving up the apexes. The 4Matic+ all-wheel drive deserves much of the credit here: It seamlessly delivered just the right amount of traction, keeping the handling nice and tidy.

Those used to the traction-control-defying, tyre-smoking and tail-wagging antics usually associated with AMG models may be disappointed, but the truth is that you end up being able to use more of the car’s potential most of the time – and enjoying the experience.

As always, there’s a choice of driving modes, ranging from Eco and Comfort to Sport and Sport Plus. Given the car’s AMG credentials, the latter is really the one to dial in: It sharpens up throttle response, stiffens the suspension and adds a delicious growl to the engine note.

In Comfort mode, progress is much more civilised and understated, which may be better suited to long-distance cruising, but seems to emasculate the car too much, certainly in the AMG context. 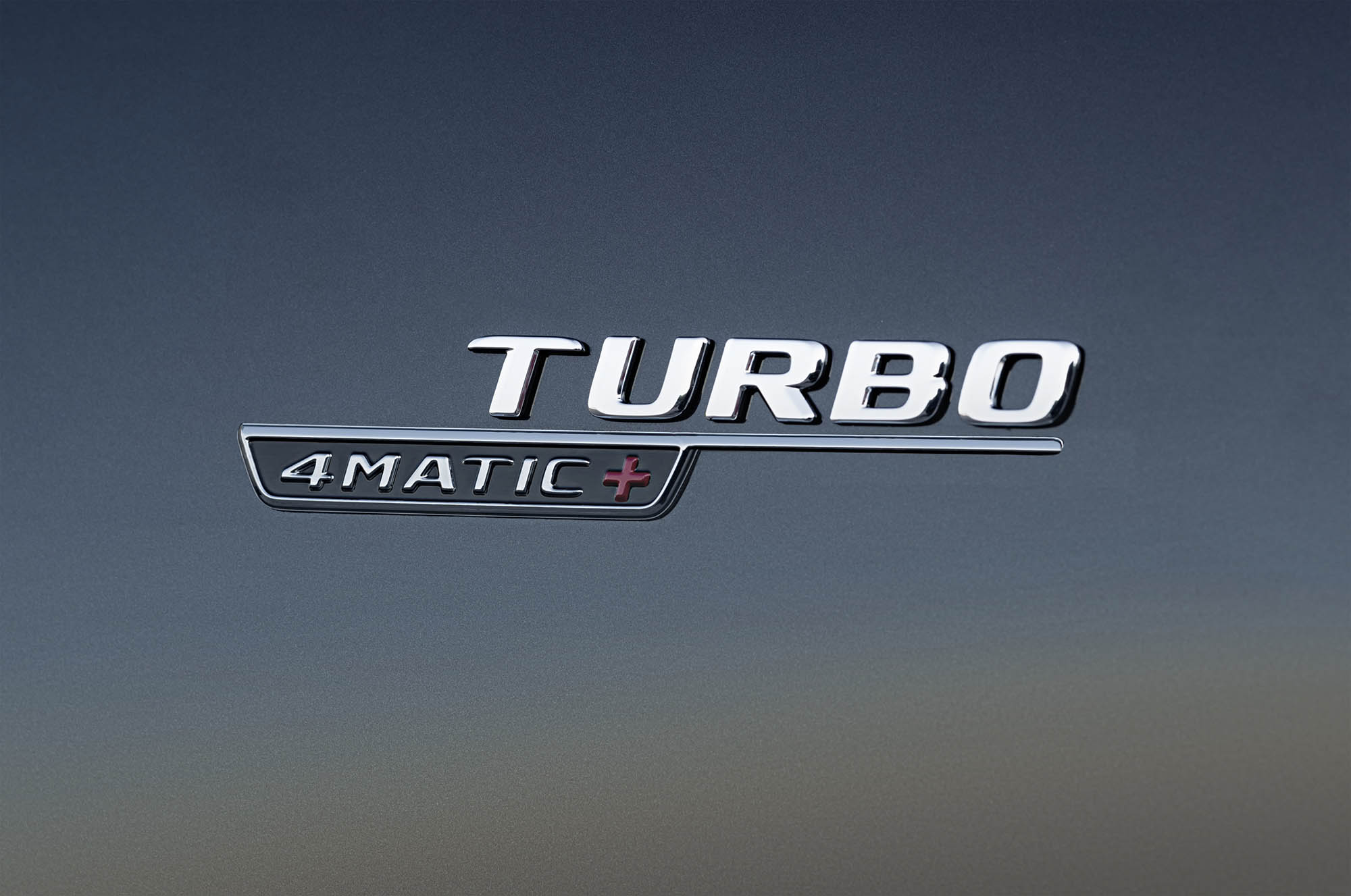 Most of all, you don’t feel short-changed by that in-line 3.0-litre mill: There’s always plenty of oomph, and the shove from the turbo/compressor combo is tremendous.

This 53-Series AMG engine has already found its way into other Mercedes-AMG models, notably the E53 Coupé and E53 Cabriolet, both of which were also on hand to sample. They share the same platform with the CLS but look less imposing in the metal.

Unsurprisingly, the dynamics are similar too, although, on the day, the E53 Coupé felt a little looser at the rear than the CLS. There’s no apparent reason for this, but if anything, it made for a slightly livelier driving experience.

Does it matter that the E53 engine is smaller, has two cylinders less, and isn’t built to reflect AMG’s renowned “one man, one engine” philosophy? Frankly, no: The driving experience remains thoroughly engaging.

It’s a trend that follows last year’s release of the AMG 43-Series engine in the C-Class and will be extended to the A-Class with a new 33-Series motor. Yes, AMG is going more mass market and, in future, only the top-end AMG models will get the hand-fettled 63 engines.

That both the 43 and 53 power plants manage to deliver the dynamic goods in such persuasive fashion proves that it’s the right decision, while making some of AMG’s engine prowess available to a wider market.

Despite my initial misgivings, I have to concede: The Mercedes-AMG CLS 53, and its E 53 siblings, prove that AMG lite is alright, after all. DM