Alexandra and Sandton go to the polls: Neighbours hopin...

Alexandra and Sandton go to the polls: Neighbours hoping for change 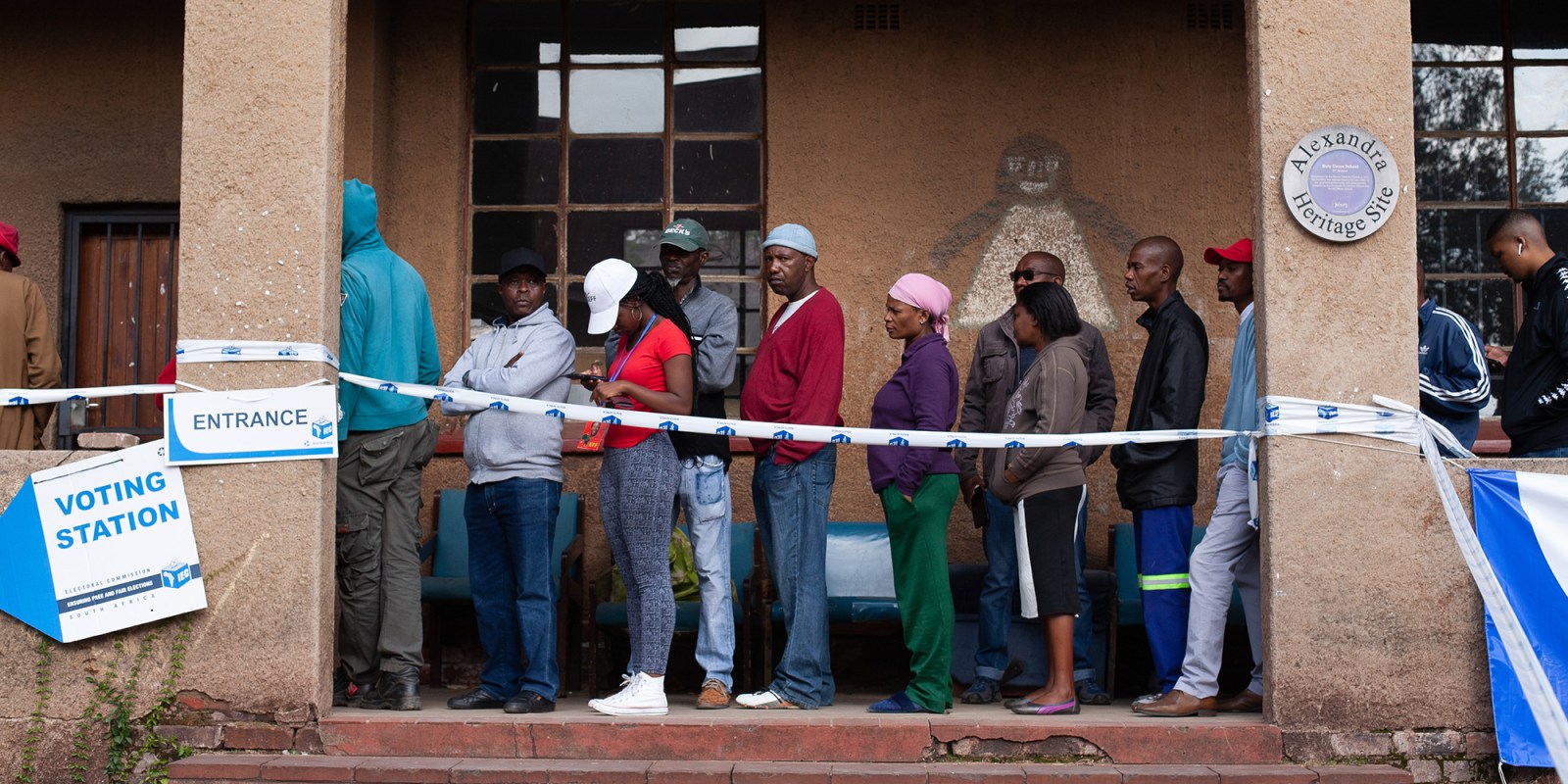 In an election in which voters are forced to choose ‘the lesser evil’, residents of Alexandra and their neighbours across the bridge in Sandton cast their ballots to give power to political parties they hope will best serve their interests.

In the wee hours of the morning of 8 May, Sina Malibe, a 55-year-old woman living in Alexandra Ward 91, woke early and went to the polls. She arrived at an abandoned building, once MC Weiler Primary School, by 5am to get ahead of the queue to make her mark.

She became a little frustrated when the voting station did not open at 7am, and when it did a few minutes later, the scanning machines were not working. The queue grew longer and a second queue had to be started to help the elderly quickly.

The queue began to move and she finally arrived at the front to vote. Malibe said her vote was a secret, but she would like the party she voted for to take care of the elderly as they lived in one-bedroom houses and often had to take care of children.

The government must also make sure children had money to go to school, said Malibe.

She would also like the government to renew Alexandra, saying she hoped it would be able to remove all the shacks and build proper houses.

The Alexandra Renewal Project (ARP) has been a point of contention recently, following service delivery protests in the area. Political parties called each other out, with the ANC asking what the DA had done during its two-year governance of the City of Johannesburg. They asked Mayor Herman Mashaba to account to the people of Alex.

In turn, the DA asked the ANC what had happened to the R1.6-billion that was earmarked for the ARP in 2011. EFF leader Julius Malema chimed in during a rally at Alexandra Stadium, alleging that the ANC’s former Gauteng premier, Paul Mashatile, and the current premier, David Makhura, knew what had happened to it. He said they could be arrested for wasting the money.

Malibe hoped these “elections go well and it is fair”. She boarded a taxi organised by the ANC, on her way to work as a party agent at a polling station in Illovo.

Ongeziwo Tiko volunteered to work as a queue controller and ID scanner at the MC Weiler Primary School voting station. He also arrived at 5am to help set up.

In March, he sent his CV to the IEC offices in Sandton and was chosen to work as a volunteer. Because he worked as a scanner and queue controller, he had been trained for one day; those with more responsibilities had had more days of training.

He like the job, Tiko said, because he got to work with people even though he had to stand all day. He was grateful that the IEC had hired him as there were no jobs. He had signed a contract with the IEC and expected a small payment after the job was done.

Three kilometres away, Prudence Moroane was working as an internal auditor at the polling station at Inkanyeza Waldorf School. A recent accounting graduate from the University of Pretoria, Moroane works at one of the big four accounting firms that were hired to audit the elections.

She arrived at 6am to “assess and evaluate proceedings” and check “if IEC staff had adequate training”. The presiding officer briefed all the IEC staff, she said, explaining what was expected of them for the day.

It was the first time she would vote, Moroane said, adding that she hoped to get time later in the day to cast her ballot when there was less of a crowd.

She was not allowed to speak to the voters or the IEC staff but only to “observe and keep a record”. “We are like a fly on the wall,” said Moroane.

This was a different approach compared with African Union Election Observers, who arrived at the voting station at the Women for Peace Community Centre at 99-8th Avenue in Alexandra. A dozen observers from the African Union entered the polling station, spent about five minutes walking about and taking photos and, without talking to anyone besides the presiding officer for a few minutes, left in their convoy.

Kethokuhle Thuse lives in Alexandra, but voted at the Sandton Fire Station, which is 500 metres from his work. He has been working at a KFC on Grayston Drive for three years.

His vote was a secret, Thuse said, but he would like the party he voted for to create more jobs, fight corruption and strengthen the borders. As he saw it, people entered as they liked.

Clamping down on “South Africa’s porous borders” has been Mashaba’s mission since becoming mayor of Johannesburg.

Mashaba was also in the queue at the Sandton Fire Station. He said he came to “vote the criminal organisation out of power” and that “Gauteng needs a new beginning”.

The mayor believed the ANC had been trying to “collapse” his administration and that the protests in Alexandra, where he was called to meet residents, were not by the community but were organised by the ANC.

The community members knew the things his administration had been doing for them.

Asked what he planned to do for Alexandra, Mashaba said he had plans for all the five million residents of Johannesburg. If the DA took Gauteng, he would work with an amicable provincial legislature.

One in three people in Johannesburg was unemployed, according to the mayor, and it would be easier for him to get economic activity going and fix the 160,000 housing backlog and the R170-billion infrastructure backlog.

“Our problems are massive,” said Mashaba.

Just as the mayor was going into campaign mode, a young boy asked if he was going to build more sweet shops, causing much laughter from the other voters in the queue.

The ANC/DA fight is a proxy battle for control over South Africa’s economic powerhouse province, Gauteng. Analyst say the race will be close, with a coalition government a real possibility.

For Debbie Aremband, who lives in Sandton and who also voted at the fire station, it was “a privilege to vote”. Although she knew a lot of people who were not voting, she said because women had once not been allowed to vote, it was important for her to do so.

She first voted in 2004, when she became eligible to do so.

“We want a free and fair country. We want a country that runs well. Obviously, we want corruption to end,” she said.

Although Aremband would not say for whom she had voted, she said the party she had chosen had since changed for the better. It was understanding the people more and learning what to do to improve the country.

It is yet to be seen what kind of change the elections will bring to the socio-economic challenges of the country, embodied in the inequality between Sandton and Alexandra. Whichever party gets the most votes, will have to contend with an expectant electorate. DM