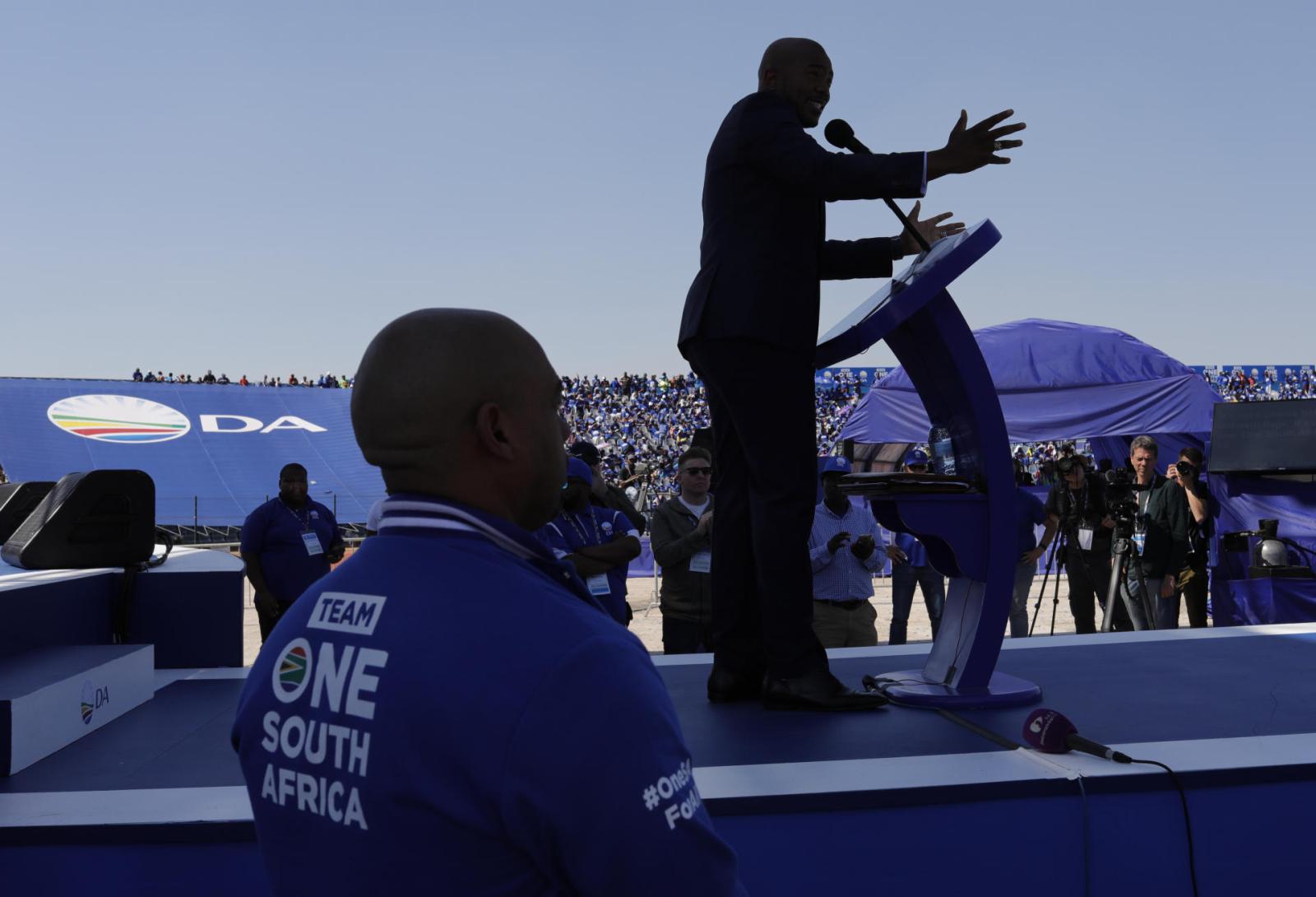 Democratic Alliance (DA) leader Mmusi Maimane (R) addresses the crowd during what was billed as the final DA rally prior to the elections held in Soweto, Johannesburg, South Africa, 04 May 2019. EPA-EFE/KIM LUDBROOK

Amid reports that the ANC’s hold on KwaZulu-Natal could be more tenuous than previously believed, the DA chose KwaMashu outside Durban as the location for one final last-ditch rally before Wednesday’s voting. Energy and spirits were high, but several senior DA figures urged vigilance at voting stations due to the fear of dirty tricks at the poll.

Forget Ramaphoria – at a tent set up by the DA on sports fields in KwaMashu on Tuesday morning, Mamainemania was in the air.

A small but passionate crowd of DA supporters greeted the party leader as if he were a rock star on arrival, with several wearing kangas adorned with Mamaine’s face.

A grinning Maimane, flanked by the DA’s KZN Premier candidate Zwakele Mncwango and the DA’s chief whip in Parliament John Steenhuisen, seemed in good spirits with less than 24 hours to go before the 8 May polls open.

Asked by Daily Maverick if the DA had chosen the location for their final rally in response to the SA Institute of Race Relations’s eleventh-hour poll suggesting that the ANC may lose its majority in KwaZulu-Natal, Maimane said that the province had been a priority for the party from the start.

“That’s why I’m here on the eve of elections,” Maimane said. “I’ve been coming here nearly every week in this campaign. I’ve been in KZN, we’ve been working the ground.”

He suggested that the SAIRR’s poll might not go far enough in its predictions: “I can tell you, the ANC is in deep trouble.”

Maimane denied that the DA had focused its KZN campaigning in Indian areas like Chatsworth, saying that the party was not interested in targeting any particular race group: “We are the only party that will grow in Chatsworth as we will in Umlazi.”

Earlier in the day, several DA leaders at the event had voiced concerns about the potential for dirty tricks during this year’s elections.

DA MP Dianne Kohler-Barnard told Daily Maverick that they had received reports from some DA voters of ballot sheets not being stamped on the back, which is required to happen immediately before the sheets are issued to voters.

Chief whip Steenhuisen told the DA supporters gathered in KwaMashu that they must “watch carefully” during the voting process to make sure all protocols were observed.

“You must watch these guys, they’ve been in the corruption business for 25 years,” Steenhuisen told the crowd.

The IFP has also been warning supporters of potential electoral fraud, with leader Mangosuthu Buthelezi hinting at the possibility of an unfair election – although Buthelezi has made this accusation at regular intervals since 1994.

In April, City Press reported on an IFP regional leader telling supporters: “The ANC looks quiet but they are busy plotting how to steal the election and manipulate the voters’ roll.”

With KwaZulu-Natal also identified as a potential hot spot for election violence, there are particular anxieties from opposition politicians in this province that voting may not proceed in a free and fair manner at all voting stations.

“It is a deep concern,” Maimane told Daily Maverick.

“I think South Africans must be vigilant. More than anything, make sure all ballots are stamped twice. Already, we’ve got intelligence about how there have been some manipulations, including what type of ink is being used. We’ve had some concerns about how special votes have been conducted.”

On Tuesday morning, the IEC released a statement in which it said it was investigating “reports of instances of the double envelope system not being used in some special voting yesterday as well as some ballot papers which may not have been stamped at the back”.

Depending on the outcome of its investigations, the IEC said it would “make a decision on whether these votes are included in the count or not”. It also called on party agents and voters to take potential problems at voting stations to the presiding electoral officer on duty.

“Providing as much detail of any incident – including where and when it occurred – would significantly speed up the investigation process,” the IEC said.

In Maimane’s view, voters themselves are often the best line of defence against electoral fraud.

“We are calling on all South Africans: be vigilant,” the DA leader said.  DM