Russian businessman Yevgeny Prigozhin prior to a meeting with business leaders held by Russian President Vladimir Putin and Chinese President Xi Jinping (both not pictured) at the Kremlin in Moscow, Russia, 04 July 2017. EPA/SERGEI ILNITSKY/POOL

Working with the Dossier Centre, a London-based investigative centre, Daily Maverick can reveal a plan to interfere with South Africa’s election by an organisation closely linked to Yevgeny Prigozhin, the businessman known as ‘Putin’s chef’ and the man behind the world’s most serious disinformation campaigns.

Using an NGO called the Association for Free Research and International Co-operation (Afric) and working with political technologist Peter Bychkov, who works for Yevgeny Prigozhin, a businessman known as “Putin’s chef”, a plan was hatched to create a disinformation campaign that favoured the ANC and put out propaganda against the opposition DA and EFF for the 2019 election.

The main Russian operative who wrote the disinformation campaign is Yulia Afanaseva (pictured in South Africa), a Prigozhin employee. Afanaseva has been in South Africa several times for Afric.

Documents reveal plans to make an “Eff manifesto sucks” video and to develop deep disinformation on both the EFF leader Julius Malema and the DA leader Mmusi Maimane. 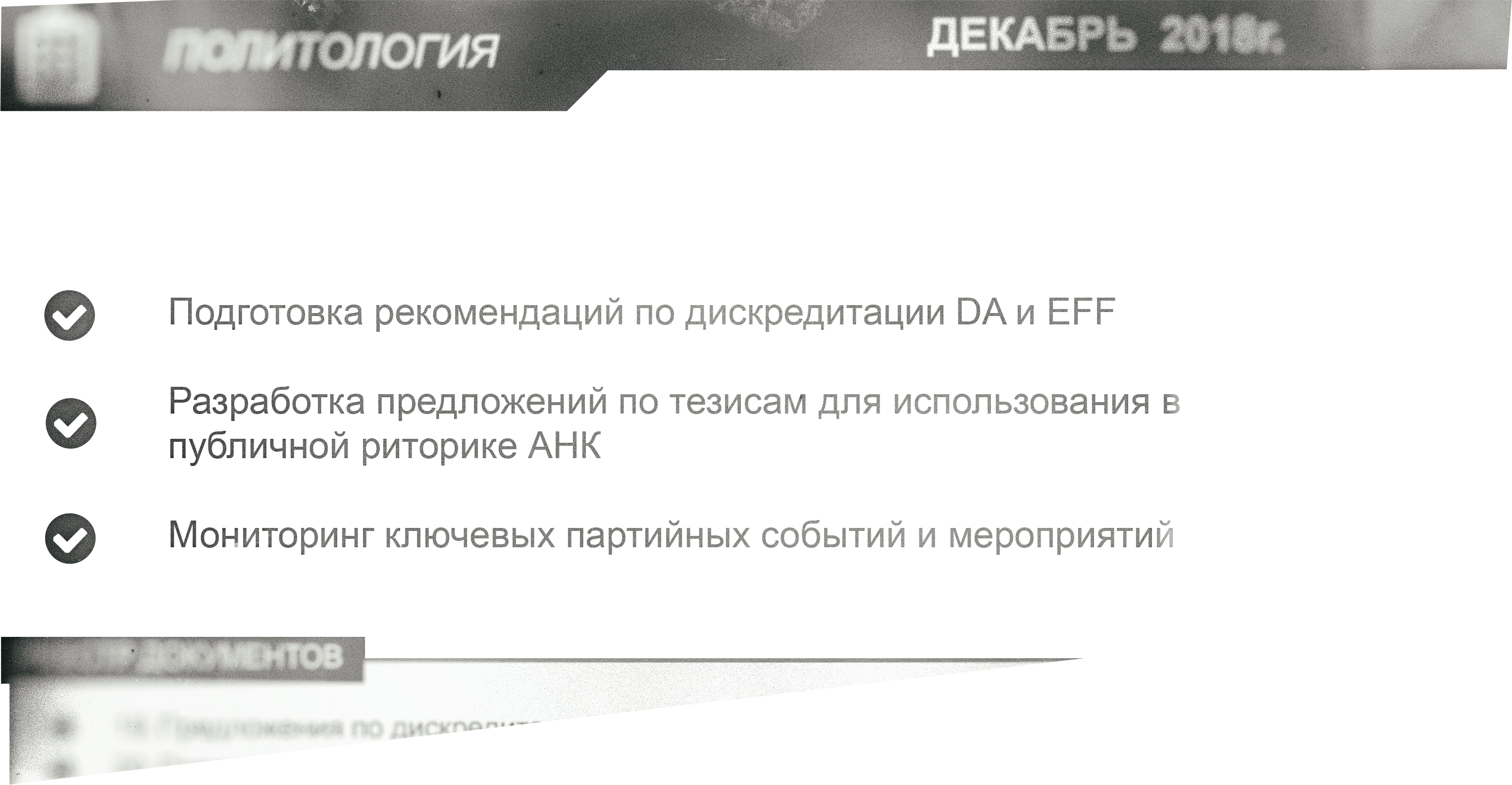 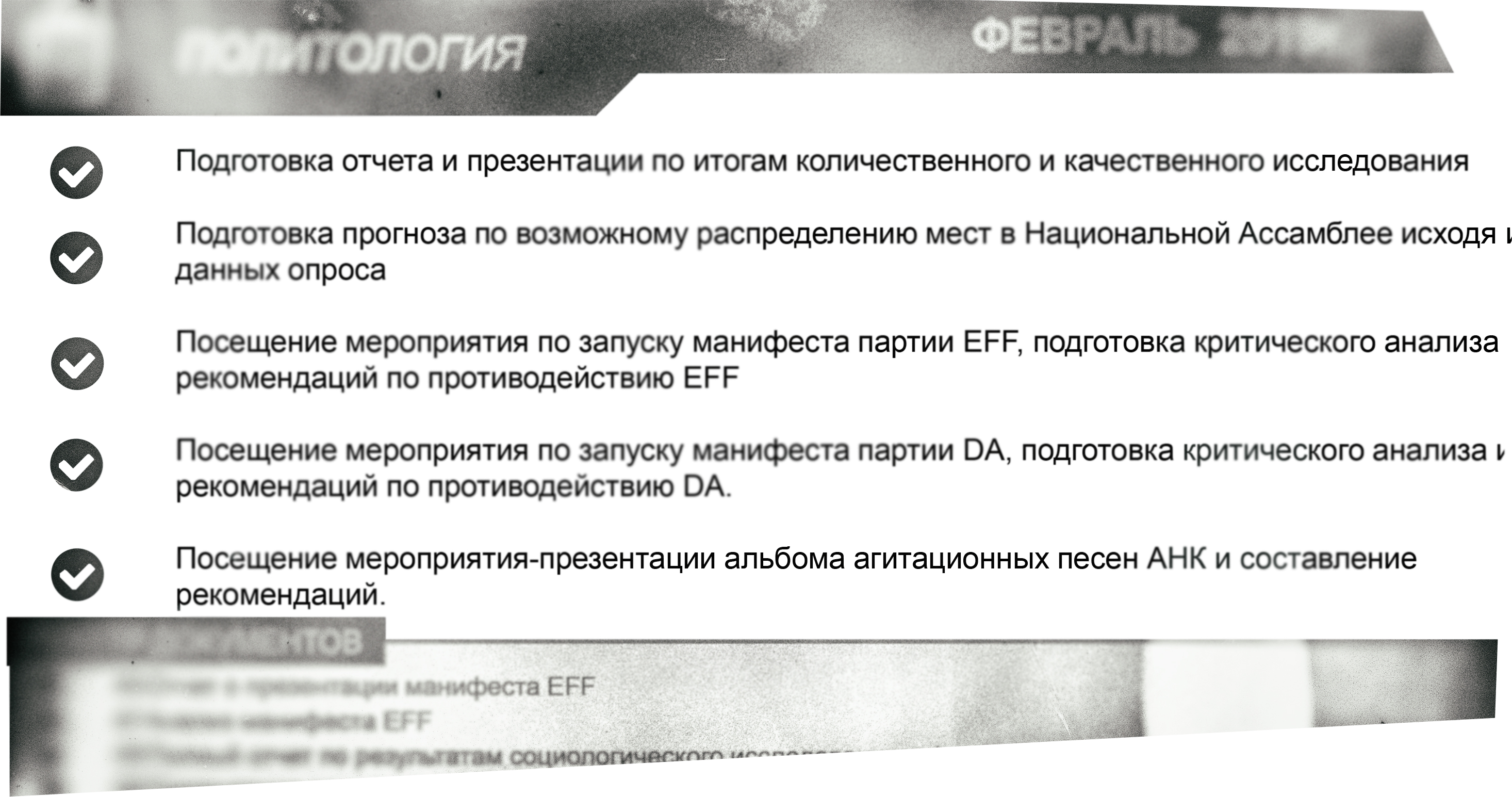 The Dossier Centre, funded by the Russian former oligarch and businessman turned rights activist Mikhail Khodorkovsky, is in possession of documents which reveal that Bychkov’s so-called “Back-Office” in St Petersburg despatched political analysts to South Africa in February 2019 under the auspices of Afric and the International Anti-Crisis Center (IAC), a geopolitical research centre whose work aligns with Russian geopolitical strategy, both of which are used as a cover for Prigozhin’s activities in South Africa.

Under the guise of analysis or research they prepared a document which contains details of the alleged disinformation campaign.

The Russian-owned Afric Centre appears to have gotten out of the blocks too late, as there is no evidence of meaningful or organised disinformation in the South African 2019 election campaign. But what is significant is that a pattern of influence-buying and disinformation led by a Prigozhin-influencer network has made its way to South Africa.

Who is Yevgeny Prigozhin?

In 2018, the US department special counsel investigating Russian interference in the US election, Robert Mueller, indicted Prigozhin for allegedly using his catering company (he started his career as a hot-dog salesman) to fund the Internet Research Agency (IRA) which led the cyberwar on presidential candidate Hillary Clinton during 2016 elections. This is now regarded as a contributing factor in bringing US President Donald Trump into the White House. The trolling agency, the IRA, is regarded as the progenitor of the Russian disinformation movement which has been unleashed in many countries around the world, according to reports and investigations.

Afric and IAC are offshoots of the IRA and, through it, Prigozhin has sought to extend Russian influence and his own business empire throughout the continent. He and other representatives of the IRA are currently on a US sanctions list and he is now making a significant effort to do a range of business deals in South Africa, too.

The South African-related documents, verified by the Dossier Centre, reveal the anatomy of a campaign to favour the ANC and the “preparation of recommendations to discredit DA and EFF” and the “development of proposals for theses for use in public rhetoric of the ANC”. It also suggests the “Preparation of recommendations to discredit the EFF leader Julius Malema”.

Moreover, Prigozhin is known for his links to the paramilitary Wagner group which was sanctioned by the US in 2014 for its role in the Ukraine. Hundreds of its men were reportedly killed in US airstrikes after attacking American positions in Syria in 2018. Wagner is active in several African countries including the Central African Republic, Madagascar, Libya and the Sudan. In August 2018 three Russian investigative journalists were murdered in the CAR — they were reportedly investigating the Wagner group.

The document, drawn up by Afanaseva, is an apparent attempt to curry favour with the ANC. It recommends “creating a pilot version of the video dedicated to the 25th anniversary of democracy”; suggests “Digital Strategy Development for the ANC”; the “Creation of information content for distribution on their own information resources”.

In addition, the document by the Russian agency, drawn up in January 2019, recommends:

The 16-page document looks like a classic ground analysis for a disinformation campaign. It recommends the use of focus groups, polling and desktop as well as social media analysis. In a separate section called the “Document Registry” which the Dossier Centre did not access, the Russian research centre also appears to have a registry of documents or research which includes:

William Bird of Media Monitoring Africa, which set up a partnership with the Independent Electoral Commission to monitor disinformation, says:

“There was not much of a co-ordinated effort. The ANC was trying something, but it was not effective in that you don’t see evidence of a national narrative being steered (by propaganda or disinformation).”

Bird says their monitoring revealed the ANC had started accounts (called sock puppet accounts) to retweet its messages, but that these had not gained traction. He said that the DA had complained that the ANC was using social media to spread the Alexandra #TotalShutdown campaign, but DA spokesman Mabine Seabe told Daily Maverick they did not detect a foreign hand behind this.

With China now the dominant political and trade partner in most countries across Africa, Russia is making a play for influence. In October, Russian President Vladimir Putin will host an Africa-Russia Summit in Sochi. The nuclear company Rosatom is signing deals across the continent and oligarchs such as Prigozhin, who are being frozen out of the West, see Africa as a new stage of both political and commercial influence.

Prigozhin wants mines, arms and a stake in a Rosebank hotel

The Dossier Centre has also revealed that Prigozhin, or his emissaries, are looking for opportunities in South Africa. These include:

Analysts say that Prigozhin uses his centres — Afric and IAC — to build support for his business interests. In the guise of legitimate civil society organisations, they are used as an advance guard to curry favour with whomever in the state they are interested in getting into business with. Election disinformation campaigns, it appears, form a part of the package.

“Yes, listen, well, if someone somewhere wrote something, it’s a fantasy, I have never dealt with all this African politics. I am in St Petersburg and doing other things.”

Afanaseva’s mobile phone was off.

DA Federal Executive chairperson James Selfe said the evidence of interference by Prigozhin’s networks should be referred to Parliament’s joint standing committee on intelligence and perhaps even to the Inspector-General of Intelligence.

“This company is embedded in the security establishment of the Russian Federation.” But Selfe also added: “If there was such a thing (the disinformation network) it was very poorly executed.”