Cold comfort from government: Port St Johns is left to... 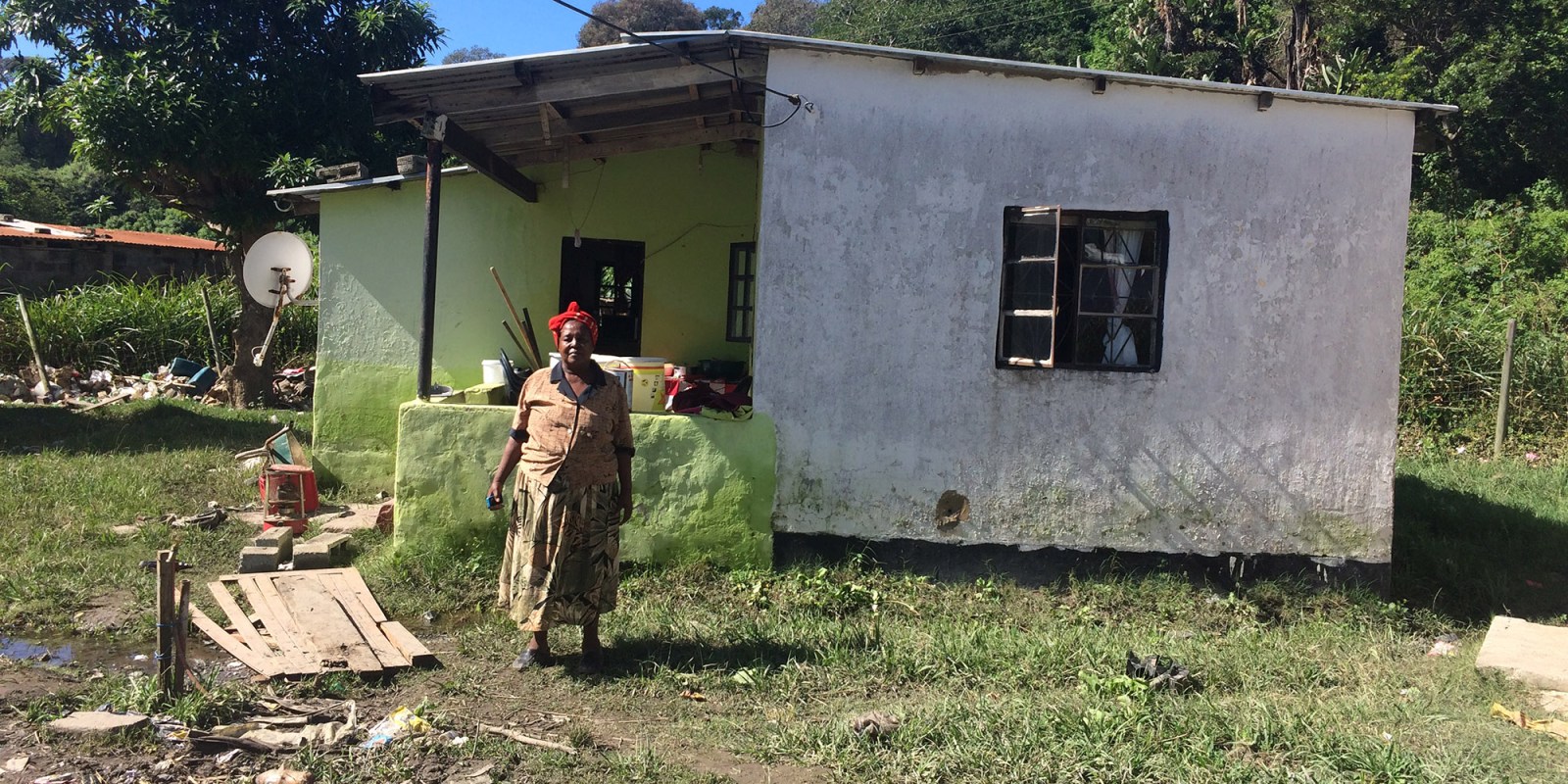 Devastating floods have laid bare the need for better planning and administration in the small coastal town of Port St Johns, but it also showed a community spirit more generous than any politician on the campaign trail.

A little stream veering off-course in between homes bears testimony to the floods that washed away lives in some parts of the popular holiday town. There is mud everywhere, and it’s a bit like walking in a riverbed with houses. Parts of the walls of some of the mud houses have collapsed. Washed-up litter rings the entire place.

Nomvelile Ngxokile, 54, points to the thigh-high line on the wall of her brick house to where the water pushed up. Everything up to that line was either soaked and muddy or was washed away by the water. This includes school books and uniforms, as well as IDs. She’d been living there for more than two decades, she says, and built the home herself.

“The rain starts on Sunday night, from the whole night, until Monday morning, even late on Monday. Hundred percent rain.” They noticed the water pushing up, and blame the blocked “drain” — the passage underneath a small bridge over the stream to the one side of the houses, which is filled with sand and litter.

It’s somehow hard to imagine that a clean “drain” would have prevented the floods, but Ngxokile insists.

“We are asking the municipality to clean the drains, but they didn’t come.”

Next to the bridge is a small dump of rubbish, with chickens picking away at scraps. Sometimes the community burns the papers themselves to get rid of the rubbish, they say. It could be that the on-off municipal strike from 2017 is to blame for the lack of action.

This wasn’t the first flood in the area — the last severe one was six years ago — but still, few want to move.

Nontobeko Mbuthuma, 65, waves her arm towards her fairly new and sturdy brick house.

“The municipality came on Sunday, they said I must move. They say this is not a good place, but I don’t know. They didn’t tell us yet (where to move to). I have been here over 10 years,” she said.

Port St Johns Mayor Nomvuzo Mlombile-Cingo says Green’s Farm is an informal settlement and not an area demarcated by the municipality for housing.

“Especially in that ditch area, the municipality had requested people no longer to build there. It’s an area that is known, whenever we have floods in Port St Johns, it is affected,” she said.

Some people were removed from the area, but in the “chaos” during the municipal strike, “some people started doing wrong things because nobody was monitoring the things that were supposed to be monitored”, she says.

The municipality has tried to resettle people in officially demarcated land, which takes into consideration the direction in which the town will expand because of environmental concerns, but people complain it’s too far and expensive to get there

“So if you make sure you have a tarred road that the taxis can use, that will be better for them,” the mayor says. Parts of the land in town are also subject to a land claim lodged by the Caguba communal property association in 2014, and it’s not possible to resettle any residents there yet.

Cleaning up after the floods is therefore “not a once-off thing, it needs long-term solutions”. Projects are needed to provide employment for residents, but the little money the town has for infrastructure goes into grading the roads with the grader that has to be constantly at hand.

“I’ve been saying to people how I wish the president can adopt this town. There are lots of projects that cannot be done by this municipality alone,” Mlombile-Cingo says. There should be an allocation from the national and provincial fiscus to help the town, as it has a lot of potential in terms of tourism, agriculture and marine biology, she says. Two high schools have even begun marine subjects with the view of the town getting a harbour in future.

“There is a lot that can be done to uplift the place.”

Outside her office in the town hall, a number of people are sitting waiting for food parcels. After the flood, many sought refuge here, and food and blankets. Businesses and churches from as far as Mthatha rallied to help those who were in need and the local bikers’ club stepped up to help transport some of the provisions. One of the local guest houses even housed some of the destitute in their facilities for three nights, with the owner cooking meals for them herself.

But now, more than a week after the floods, there seems to have been a change of plan, with the food trucks going directly to the community. Perhaps this is because the number of people coming to the town hall for food grew somewhat in the days after the flood. Some people just came because they were hungry, not because they had lost their homes in the floods. An 80-year-old grandmother, who walked kilometres to be at the town hall, bursts out in tears when she hears this. Lonwabo Pato, a young man sitting next to her, is enraged.

“They have nice houses, they are working, they have nice salaries. They don’t think of the people who are very poor. Old people are sitting here, they have nothing in their stomachs!”

Pato has a cold from sleeping on the wet floor after water broke through the wall of his mud house. He says he was grateful for the refuge and the blankets he received in the days immediately after the flood. He lost his ID in the water and says many people won’t be able to vote if they don’t get ID books soon. Even if they do, they might just desert the ANC.

Ramaphosa’s recent campaign visit to the province gave rise to rumours that he might make it to Port St Johns. After all, he visited KwaZulu-Natal after the floods there, which happened at the same time as those in Port St Johns.

“They even promised us yesterday that the president was coming, but we didn’t see a president, we only saw a picture on a bus of Cyril Ramaphosa. Not he, himself,” Pato says, and shrugs. DM