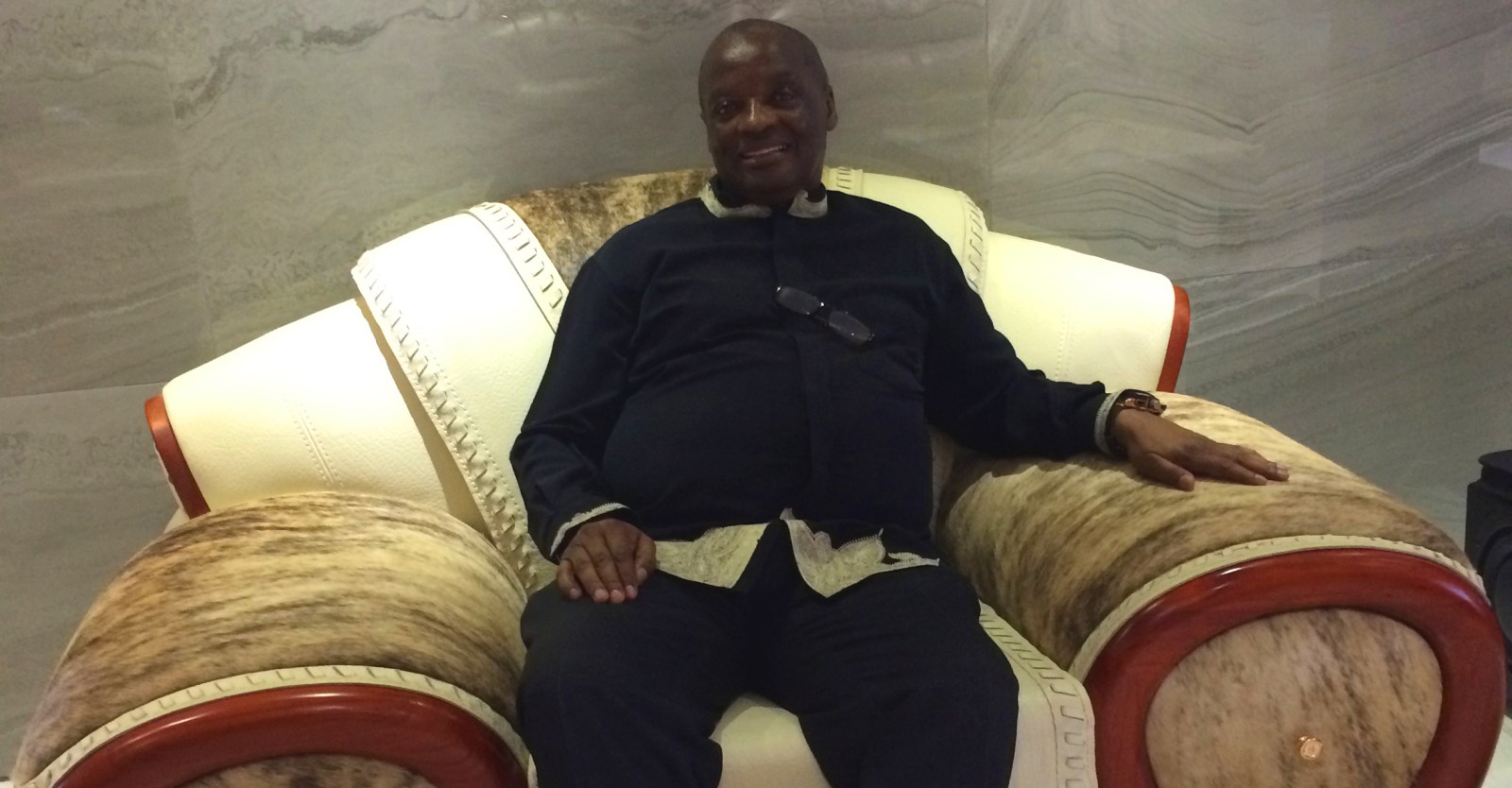 The African Transformation Movement has been rocked by claims that former president Jacob Zuma’s faction of the ANC had a hand in its formation, although Chief Apostle Caesar Nongqunga, who is said to have come up with this idea, denies it. One thing is certain - Zuma’s history with the church goes back a full half-century.

There is nothing fancy about the precious book the head of the Twelve Apostles of Christ church held open on his lap. It comprises of a 100 or so colour-printed A4 pages typed out in a garish font that resembles handwriting. It’s bound with a plastic ring-binder and has see-through plastic sleeves on the outside.

Yet Chief Apostle Caesar Nongqunga held it carefully, and rationed access to its pages. “It’s classified,” he winked during an interview at his home in the rural Eastern Cape. The book is a copy of the diary of Chief Apostle Ndlovu, who headed the church in the Seventies.

In 1971, he wrote of a plan to unify the ANC, the PAC, and the Inkhatha Cultural Liberation movement, with Jacob Zuma representing the ANC in these talks. Failing this, he wrote that all African Independent Churches should be unified to form “a strong African Transformation Congress to bring peace between the PAC and the ANC”. In a next entry, he wrote: “We can form a strong Peace Political Party, if only we can unify or unite all Messianic Churches like Bantu, Ntsikane Prophets, Shembe, Zion Christian Churches and SASO. I don’t see that any of these existing political parties can unify Africa.”

Nongqunga said he believed this was a prophecy of sorts which came to fruition in 2018, when the African Transformation Movement was formed. The “congress” in the name was replaced by “movement” when the name was registered with the Independent Electoral Commission so as not to have the ANC objecting about possible confusion, he said.

“The story started in Bloemfontein when I was in a church service, in 2017. We had a service in Bloemfontein at a stadium there which is in a location. When I was preaching, suddenly something came over me to tell the congregation that we are no more going to vote for the ANC. We used to vote for ANC as the church,” he said. “We don’t allow ourselves to vote as individuals, because we are saying if we are here politically divided, we will also be spiritually divided, because if it comes to politics, we’ll speak other languages and end up fighting whilst we are still in church, yet if we are to claim that the spirit is upon us, we have to speak in one language, which is why we discuss the political issues to decide which party to vote for. It’s been our norm all these years that we go out there and vote for ANC.”

With 6.8-million members, this is politically significant.

Nongqunga made this announcement without consulting the Apostle Board as usual when taking a grave decision, but to his surprise, they agreed with him afterwards. When prompted, he remembered that the thanksgiving service was in December 2017 – which was, incidentally, the same month that Cyril Ramaphosa was elected ANC president, although Nongqunga would argue that this is irrelevant. The reason for not supporting the ANC any more was that the church could no longer support a party so violent, he said.

“If the ANC for which we are voting is fighting and killing each other, especially their comrades, over the positions for which we put them in, are we not involved in those killings? Are we not having our hands full of blood?”

Nongqunga said while the party was his brainchild, he had no interest in being politically involved in it, or going to Parliament. “I have bigger work to do,” he said. There are political people involved in the party, such as former ANC member, Mzwanele Manyi, who was a strong Zuma supporter, and former DA chairperson in the Eastern Cape, Veliswa Mvenya, who said her task was to “kill the idea that this [ATM] is a Zuma party”. Former Unitra Community Radio station manager, Phumzile Gabada, who was linked with Cope before, is also involved in the ATM.

The party was established by the SA Council of Messianic Churches in Christ (SACMCC), which represents churches like the Twelve Apostles’ Church in Christ and the Bantu Church of Christ, and which Nongqunga said was founded to set up a party. The council is also said to have been founded in opposition to pressure from the SA Council of Churches for Zuma to step down, but Nongqunga didn’t mention this as a reason.

The ATM is in favour of capital punishment in the case of cold-blooded and unrepentant murder (self-defence and killing someone unintentionally doesn’t count) and against abortion. Nongqunga’s views on these principles seem to converge with the party, but when it comes to land, Nongqunga’s beliefs are a little different from the party’s call for expropriation without compensation. “People on this land, the British and the Chinese, they are African, because the first creation was done in Africa,” he said. “The scramble for Africa is a scramble for the ancestry of all these people. Who are we to fight these people?” he said, adding that God was on the side of the colonisers when he guided their safe passage across the sea. Nongqunga said people must co-exist in peace on the land.

Asked whether he was close to any politicians, Nongqunga said he had met many presidents, including Zuma, Ramaphosa, Thabo Mbeki, as well as UDM leader Bantu Holomisa, who has a strong political base in the Eastern Cape where he is from.

Nongqunga said the church supported liberation fighters in exile financially in the past. Fast forward to more recent times, Rapport reported in January that talk did the round in Luthuli House that the church would help carry Zuma’s legal costs. Judging from Nongqunga’s sprawling private home (it’s a compound with separate houses for the children and their families, as well as a floor with his office, which seems to have walls comprising entirely of one-way windows, and rose gardens next to the walls) and the church he is building opposite for the tiny community of Ngqeleni, the Twelve Apostles Church in Christ has some money.

In fact, the Sunday Times has reported that there was the talk of the church wanting to acquire VBS Bank and use the resources of its members to turn it around. Disgruntled general secretary of the SACMCC, Buyisile Ngqulwana, in an affidavit said Zuma arranged a meeting with the Venda King Toni Mphephu Ramabulana about VBS, but the council eventually said it didn’t have sufficient funds. Ngqulwana said in his affidavit there were “consultation sessions” with Zuma at his homestead in Nkandla, and with ANC secretary-general Ace Magashule at Luthuli House.

The ATM managed to get 30% of the vote in a recent by-election in a ward that encompasses Ngqeleni, and while this was only about 500 actual votes, it’s an impressive performance for a new party, which even trounced more established opposition parties like the UDM. Gabada said the ATM’s votes came almost entirely from former ANC voters. He claimed the party could have done better if it were not for alleged cheating. Some claim this result could be an early indication of things to come, and the party seems confident enough of its campaign strategies that it has no billboards and a minimal number of posters.

Nongqunga himself believes Chief Apostle Ndlovu’s diary inscription referring to the rise of a new party is all that is needed for it to come true, almost half a century later. DM