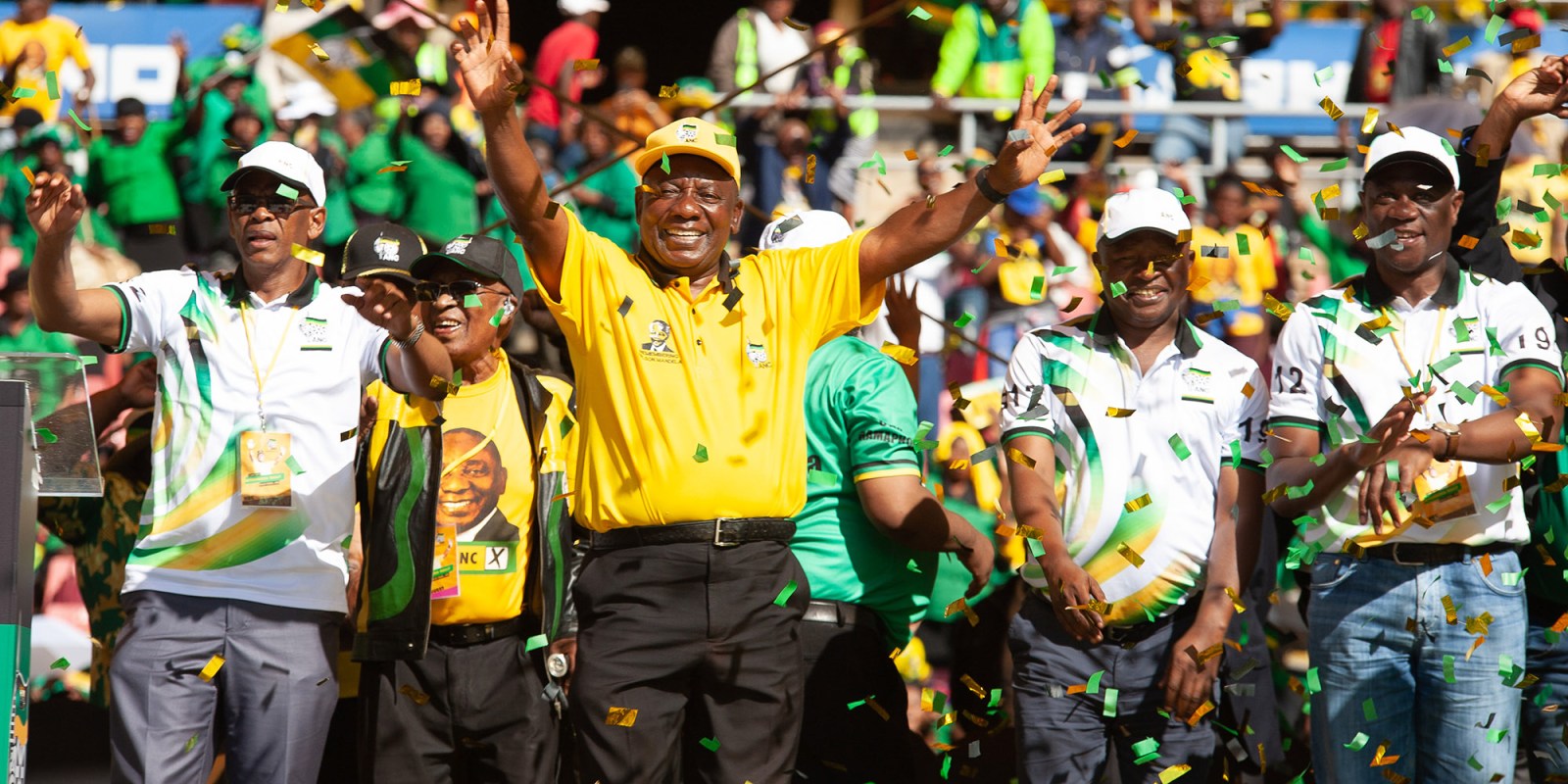 President Cyril Ramaphosa on Sunday addressed the ANC's Siyanqoba Rally ahead of the 2019 elections. He urged voters to get to the polls and support the ANC. Photo: Greg Nicolson

The ANC has the knack of ending its election campaigns with rallies so spectacular that they could almost make you believe the party will live happily ever after. Beneath the veneer, though, there is the intrigue that will play out after the elections.

It was a strong speech that President Cyril Ramaphosa delivered in the ANC’s Siyanqoba final elections rally at Ellis Park Stadium on Sunday to an almost-capacity crowd in the 60,000-seater stadium.

A number of seats were empty again before his speech got to the halfway mark, but those that stayed were enthusiastic and cheered when Ramaphosa spoke out decisively against corruption. Having taken steps to strengthen the law enforcement agencies and revenue service in the almost 15 months since he forced Jacob Zuma’s resignation as president, his emphasis was on corruption:

“Let us declare, here and now, that we will never surrender our freedom to corruption and state capture,” he said. “We will fight with every means at our disposal to ensure that those who occupy positions of authority serve only the public interest.”

By now it is well-understood that Ramaphosa’s election fight wasn’t just against other parties, but also, ironically, against a faction within the ANC itself. He twice went off-script to make the point that the steps he was taking against corruption were mandated by the ANC’s 2017 national conference at Nasrec, where he was voted president by a majority of delegates — albeit a fairly slim one.

He emphasised that there were processes underway, such as the Zondo Commission, which were “uncovering the nature and extent of state capture” but added that there was still more to do.

“We should expect resistance from those who have benefited from wrongdoing,” he said in what was effectively a reference to about half the current ANC. “But let there be no doubt — those responsible for state capture and corruption will be held to account, because we have to restore the rule of law.”

“We are determined that those found guilty of corruption or involvement in state capture will not be allowed to occupy positions of responsibility, either in the ANC, in Parliament or in government. This is important if we are to deal with the issue of integrity. The era of impunity is over. We are now entering the era of accountability. We are now entering the era of consequence.”

Looking at the ANC’s lists to Parliament, and even at its top leadership, this is a little difficult to believe. The lists contain some compromised candidates such as Nomvula Mokonyane, Malusi Gigaba, Bathabile Dlamini, Faith Muthambi and Mosebenzi Zwane, but as ANC secretary-general Ace Magashule (himself facing a host of corruption allegations) said at the time:

“You are talking about people that have never been charged with any crime or offence.”

Ramaphosa said in an interview in February on the sidelines of the African Union summit, when asked how he would deal with issues of integrity among the ANC’s public representatives, that there are processes unfolding. He made a gesture with his hands that resembled flowers blooming. These processes will have to appear to be objective and fair and without his interference if there isn’t to be a backlash against him.

Already there are allegations from a disgruntled member from the newly formed African Transformation Movement — a dark horse with strong support in charismatic churches — that Zuma and Magashule were trying to use that party to weaken Ramaphosa.

Also, Ramaphosa had barely finished speaking in Johannesburg when Zuma stepped on to a stage in Pietermaritzburg for his own Siyanqoba rally — as if he’s still the president. In fact, Isolezwe reported in January that there were people in rural KwaZulu-Natal who still thought Zuma was the president. Whether Ramaphosa’s repeated visits to the province in recent weeks would have completely cleared this confusion is difficult to say, but it suits Zuma to still have power and patronage networks in a province as large and rich as KwaZulu-Natal.

The Ellis Park Siyanqoba rally was a far cry from the ideal of unity that elections organiser Fikile Mbalula privately said he wanted: All the former presidents standing up on stage, triumphantly holding hands. Thabo Mbeki was never one for rallies, and would possibly not have gone if Zuma had gone, so in the end, it was only Kgalema Motlanthe who graced the occasion with his presence.

So even though Ramaphosa is the incoming president — unlike Zuma when he addressed the 2016 local government elections Siyanqoba rally in the same stadium, just over a year before the ANC’s Nasrec conference — there is still uncertainty over whether Ramaphosa will be able to rally the ANC behind him effectively enough to do what he’s promised to do in this elections campaign.

There is also the constant simmering talk that some comrades are devising a plot to oust him in the months after the elections. That’s possibly why he’s been trying to rally the party’s veterans behind him — they’ve had a really prominent place in his elections campaign, too — and why Cosatu and the SACP, both friendly to Ramaphosa, are back to providing messages of support on an ANC platform after being left off the programme in the latter part of Zuma’s presidency.

It could also be why there’s the talk among Ramaphosa supporters in the ANC Youth League of a “revival” ahead of this structure’s conference in September. The young women’s desk in the ANC Women’s League is also mostly behind him: They were a constant feature on his campaign trail with their distinctively youthful and sexy uniform of black dresses and ANC doeks.

So, after the fight to keep the ANC in power with a respectable margin — closer to the 60% mark than the 50% mark (the party got 62.15% of the vote in 2014) — Ramaphosa will have to ensure that the party pulls behind him sufficiently so that he can do what he’s promised on corruption, growing South Africa’s economy, attracting investment and giving the thousands of people he encountered in places without potable running water and sanitation the services they deserve.

While Ramaphosa did not denigrate any opposition parties during the campaign in the same way Zuma did, including indirect racial references to “white” parties, he did use the ANC’s incumbency to his advantage in an unscripted piece of rhetoric.

“Others scream, we build houses. Others criticise, we provide water to our people. Others make false promises, we build clinics and hospitals. Others want to create jobs, we create jobs. Others jump on rooftops, we are the ones who provide ARVs to those who live with HIV. Others praise themselves for what they have not done, we provide pensions and grants to 17 million South Africans. Others scare off investors, we invite investors to come to our country. Others insult us, we respect the people of South Africa.”

Ramaphosa promised that the ANC will be the government after the elections, but his battle inside the ANC is far from over. DM