We have been here before – and we will not be silenced 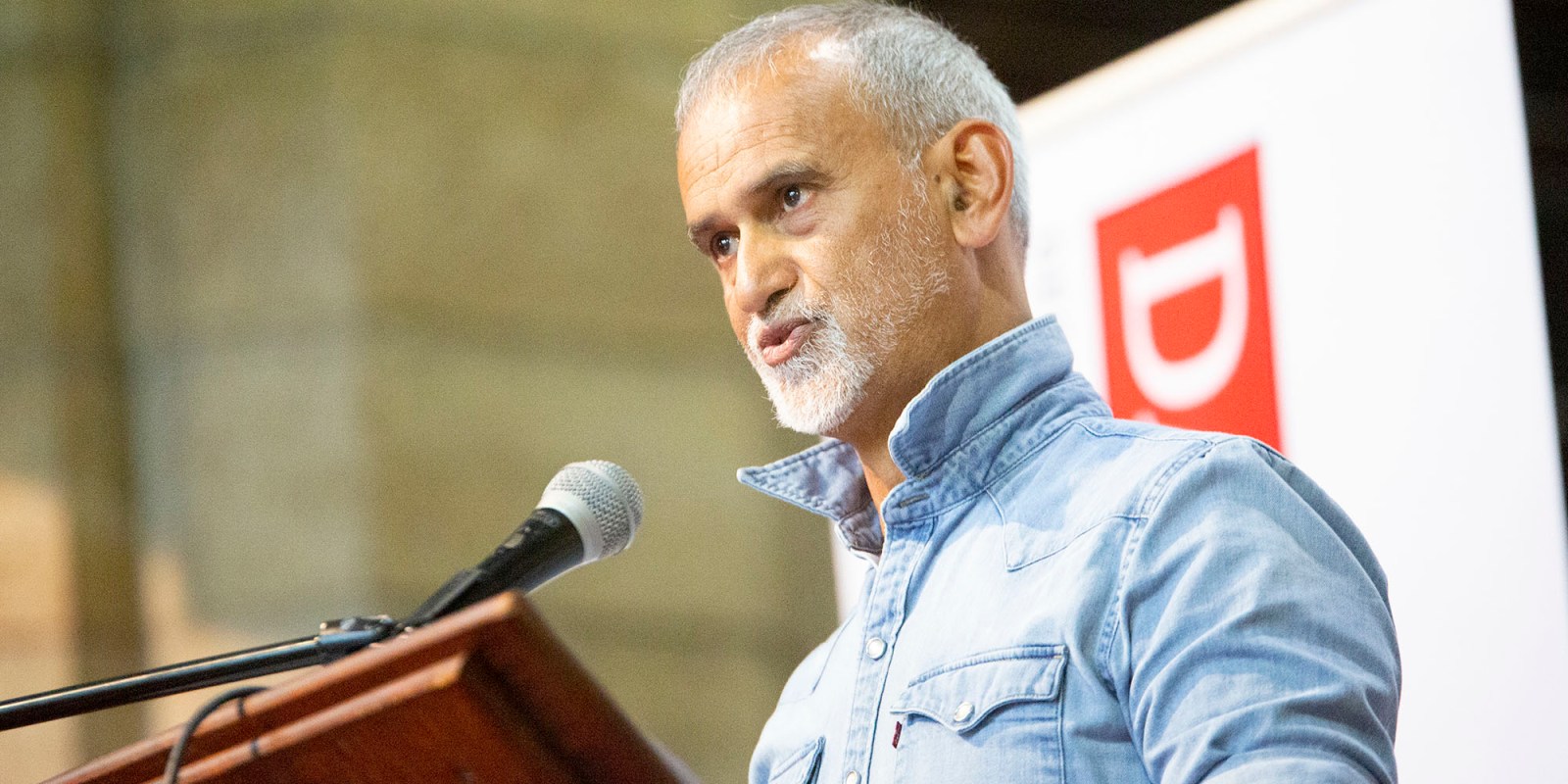 Censorship and the suppression of ideas are the first resorts of tyrants. Assassination of critics is just another step on that road to tyranny. We have to guard jealously against the erosion of our hard-won freedoms.

Mike van Graan is a cultural activist, playwright, poet and writer. This is the text of his address in St George’s Cathedral, Cape Town, at the World Press Freedom Day gathering on Friday 3 May 2019.

Just over three decades ago, during a state of emergency in this city, “Arts Festival 86: Towards a People’s Culture”, was organised. Four days before its opening, it was banned, deemed to be a national security threat.

In Claremont, a theatre group was arrested and charged with constituting an illegal gathering for staging street theatre that protested the migrant labour system.

Piekniek by Dingaan, a cabaret performed by the mainly white Afrikaner Capab Drama Company, mocked the restrictions placed on the media by the National Party regime. The cabaret was banned from being performed at the Nico Malan – the former Artscape – not by the Censorship Board, but by the chairperson of the Capab board, a government appointee.

And yet, post-94, a former culture minister who had sworn to uphold this Constitution, refused to open an exhibition featuring photographs of gay women embracing each other, as in her view, it was “immoral, offensive and against nation-building”.

Two South African films – Of Good Report and The Wound – were banned by the Film and Publications Board, only to have the bannings overturned by courts of law.

Then there were those within the ruling party who lambasted the disruption of the launch of Gangster State, but who just a few years earlier, had themselves called for the destruction of Brett Murray’s art work, The Spear. The painting was part of Murray’s Hail to the Thief exhibition which already in 2012 spoke to the themes of state capture, the ransacking of the public purse by politically-connected elites and the complicity of the ruling party.

But what is the disruption of a book launch, or the destruction of a painting compared to the deliberate, methodical sabotaging of the National Prosecution Authority, the decimation of the SA Revenue Service, the looting of state-owned enterprises, the destruction of the Scorpions, the laying waste of the SA Police Service, the relentless assaults on the former Public Protector, on journalists and whistle-blowers by thieves, thugs and traitors who now seek our votes, begging for another chance?

Remember those who now beat their breasts

And wail about their leaders gone astray

Who bleat about the selling of ideals

And the robber capture of once good comrades

Remember how once they mocked and spat their vitriol

Drowning you in epithets

Banning you to the margins

When first you pointed to the error of their ways

And begged them return to what once you all believed in

These are not men of principle

Nor women of moral courage

They are weeds that blow in the factional winds of opportunity

Smile with them if you need to

March with them if you have to

That when the current tide has turned

And they and their faction are

Once more delivered to the troughs that your vote bestows

Should you dare be a democrat

They will not hesitate to unleash their tongues

To cut you down

Unsheath their knives and plunge these in

And margin you as traitor once again

Having completely compromised the security services and those mandated to enforce the law, the thieves, the thugs and the traitors now claim the law to reject criticism of them as unfair… “innocent until proven guilty”, they angelically protest.

As with the right to education, the right to security, the right to health, so those of us who are better resourced are more able independently to practice the right to freedom of artistic expression. Most practitioners in our country though are dependent on public resources to create and distribute their work. Which is why we fought hard for the arm’s-length principle in the initial White Paper on Arts and Culture, to ensure that what happened at Capab would not happen in our democracy, that politicians and their appointees would not compromise freedom of expression by controlling public resources for the arts or publicly-funded spaces.

And yet, just a few years after adopting this principle, the law was changed so that all boards of publicly-funded cultural institutions have their chairpersons directly appointed by the minister. Independent organisations created by the arts and culture sector are ignored in favour of a sweetheart organisation created and funded by the Department. Public funding is used to limit freedom of artistic expression; as a consequence, self-censorship is rife. Hardly surprising when a minister in charge of the police who massacred 34 miners exercising their right to freedom of association and freedom to protest, is now the minister in charge of an industry premised on freedom of creative expression.

And the ruling party tells us that we must thank them for the freedoms they brought us, as if we should be thankful for these freedoms by not exercising them, at least not against them.

“Let us remind you”

Grown deaf with their own propaganda

Drunk on the spoils of incumbency

And their patrons’ gifts

Blinded by the arrogance

“It is us who brought you freedom

If it were not for us

You would not have the right to write

To say as you please

To insult us with your poems

Your twisted tunes and

Fast having made up for time lost

Caricatures of that which once they said they loathed

Would have us silent

In the face of betrayal

Would have us genuflect

To them as lords

When first they promised they would serve

You thieves of dreams

You robbers of hope

Who seek to balaclava your looting

That springs hollow from

Ours are freedoms we carry in our hearts

They were not yours to give

They are not yours to take

The freedoms written in our hearts

In the voting booths

So make your hay

While your sun goes down

For soon our onward march

Will footnote you to history

We see how those who would suppress freedom of expression work. First, they ignore their critics, hoping they would go away, and if not, they take away their funding, remove their platforms for criticism. Then they label them – racists, Stratcom agents and unleash the trolls – shooting the messenger to try to discredit the message. Then they leak fake and even real stories to embarrass the critic so that they back off. After which they threaten legal action, suing the critic for millions in order to silence them. Then there’s the physical intimidation, of the critics’ loved ones, and the death threats to the critic. Then there’s the abuse of state institutions to conduct raids, issue summons, make trumped-up arrests.

And finally, there are the assassinations, the ultimate form of censorship.

When truthtellers are declared enemies of the people, when news reporters become news items for the threats against them, when truth defenders need bodyguards, then we should know that democracy has not been won; all that has changed are the conditions in which it needs to be advanced and defended against those who would create democracy in their selfish, self-serving image.

I’d like to end with a poem – The Patriot – to honour real patriots but labelled traitors, by those who have power, but are the real traitors for having committed treason against our Constitution, our country and our people.

I am not a patriot

For pointing out naked emperors

For not joining the chorus of praise singers

For allegiance to country, not party

I am a traitor

For choosing the margins not mainstream

For saying what others but think

I am a sellout

For donating my poetry to resistance

For refusing to live in denial

For declining thirty pieces of silver

I am a racist

For breaking the silence with a whisper

For preferring thought to propaganda

For standing up amidst the prostrate

For repeated conspiracy with the questions what, how, why

I am a counter-revolutionary

An enemy of the people

An agent of imperialism

A front for white monopoly capital

For not martyring my mind

For not holding my tongue

For not sacrificing my soul

I have been here before

And here I am again

As some other “ist”

This time as artist

Hard on the footsteps of those

Who appropriate history for contemporary pillaging

Who now crucify the people on their electoral crosses

I have been here before and I shall be here again

For as long as the poor – like Truth – are with us. DM