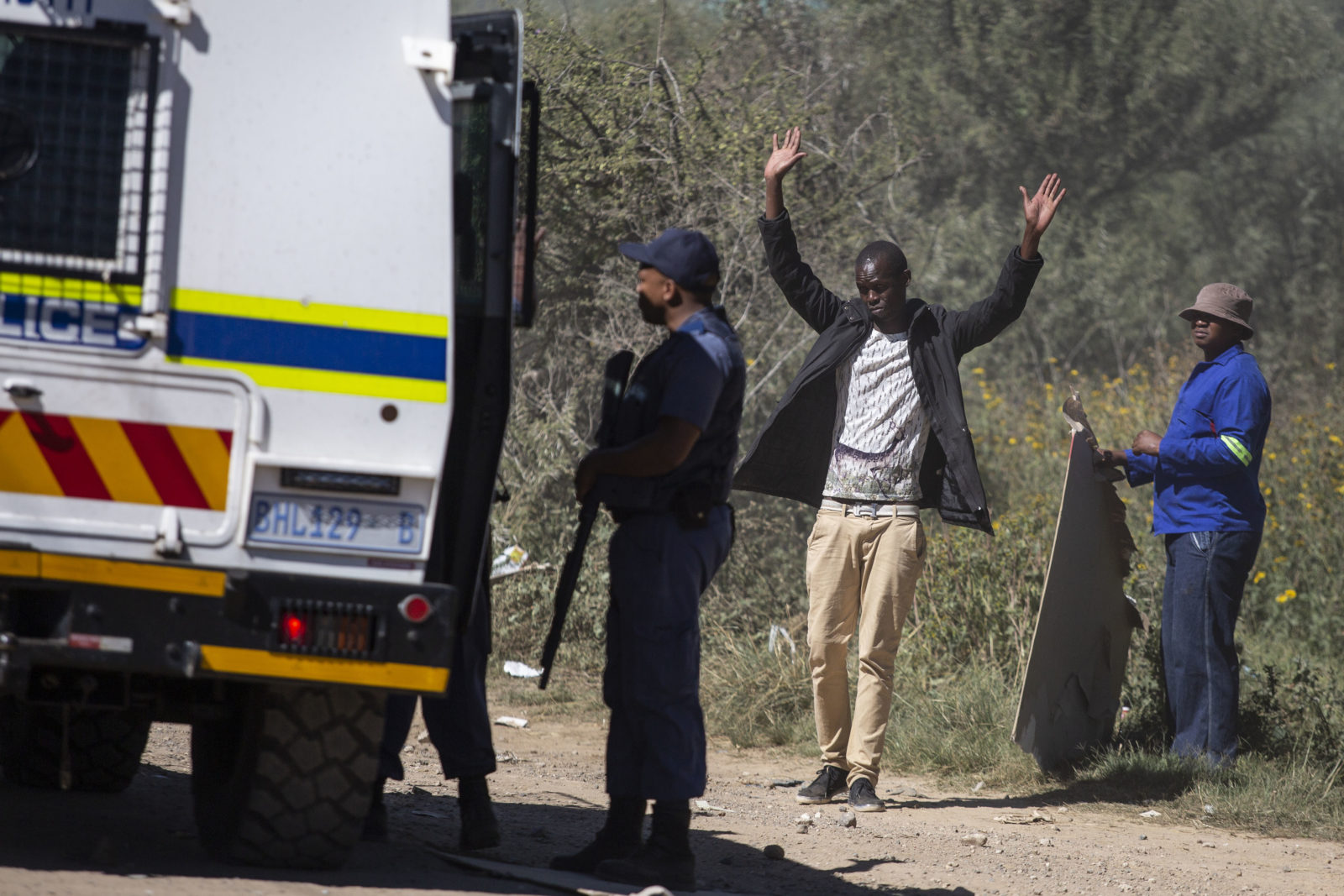 In this file photo from April 2018, a protesting resident of Mahikeng holds up his hands to avoid being shot at by police as violence continued in the capital of the North West province. Picture: Daily Maverick

Just days before South Africans cast their votes in the national and provincial elections, the Justice, Crime Prevention and Security Cluster is on high alert in KwaZulu-Natal and North West after these provinces were identified as high risk.

Police Minister Bheki Cele has warned that areas within the North West and KwaZulu-Natal provinces are being viewed as potential trouble zones in advance of the 8 May elections.

Speaking at the Government Communication and Information System offices in Pretoria, Cele said: “Through our intelligence operations hot spots in the country have been identified and will be prioritised. The highest risk areas are the North West and KwaZulu-Natal”.

On Thursday 2 May, the Justice, Crime Prevention and Security Cluster (JCPS) briefed the media on the state of readiness for the upcoming general elections.

Cele said the motivation to flag these two provinces as high risk stems from the activities that have been unfolding.

“It is not the duty of the police to interfere with peaceful marches. We come in where there [are] violent actions where it begins to interfere with the constitutional rights of other people. So these two provinces seem to be high on that, especially KZN, [where] there are still areas where there is political violence and blockage,” said Cele.

Some of the areas flagged as high risk in KZN are Ilembe, Lindelani, KwaDukuza, Ndwendwe and a township in Vryheid called Bhekuzulu.

“Already there has been a pre-deployment there. We have sent some platoons and some sections in those specific areas to make sure that there is a pre-stabilisation,” Cele said.

In North West, the areas flagged are Bloemhof and Brits. This is after politicians were barred from entering the province and two buses were burnt, according to the police minister.

“They are high risk because there is a lot of interference with the political and constitutional rights of other people,” said Cele.

Even though the North West and KwaZulu-Natal have been pinned as high risk, Cele said all other provinces have the same basic security system in place. The identification of risk is ranked according to low, medium and high. All provinces will have some form of risk.

The country has been faced with a surge of service delivery protests in the run-up to elections. In some instances, protesters have threatened to disrupt election day.

Cele said: “Police officers will monitor all forms of protestation or shutdowns to ensure that no individual’s constitutional right will be infringed.”

In Gauteng, Alexandra has been identified as high risk especially after the shutdown protests which took place in early April.

At Thursday’s briefing, journalists also heard that Home Affairs will be issuing more than 300 identity documents in the Eastern Cape and 121 in KwaZulu-Natal in order to enable people who lost them during the recent floods to vote. DM