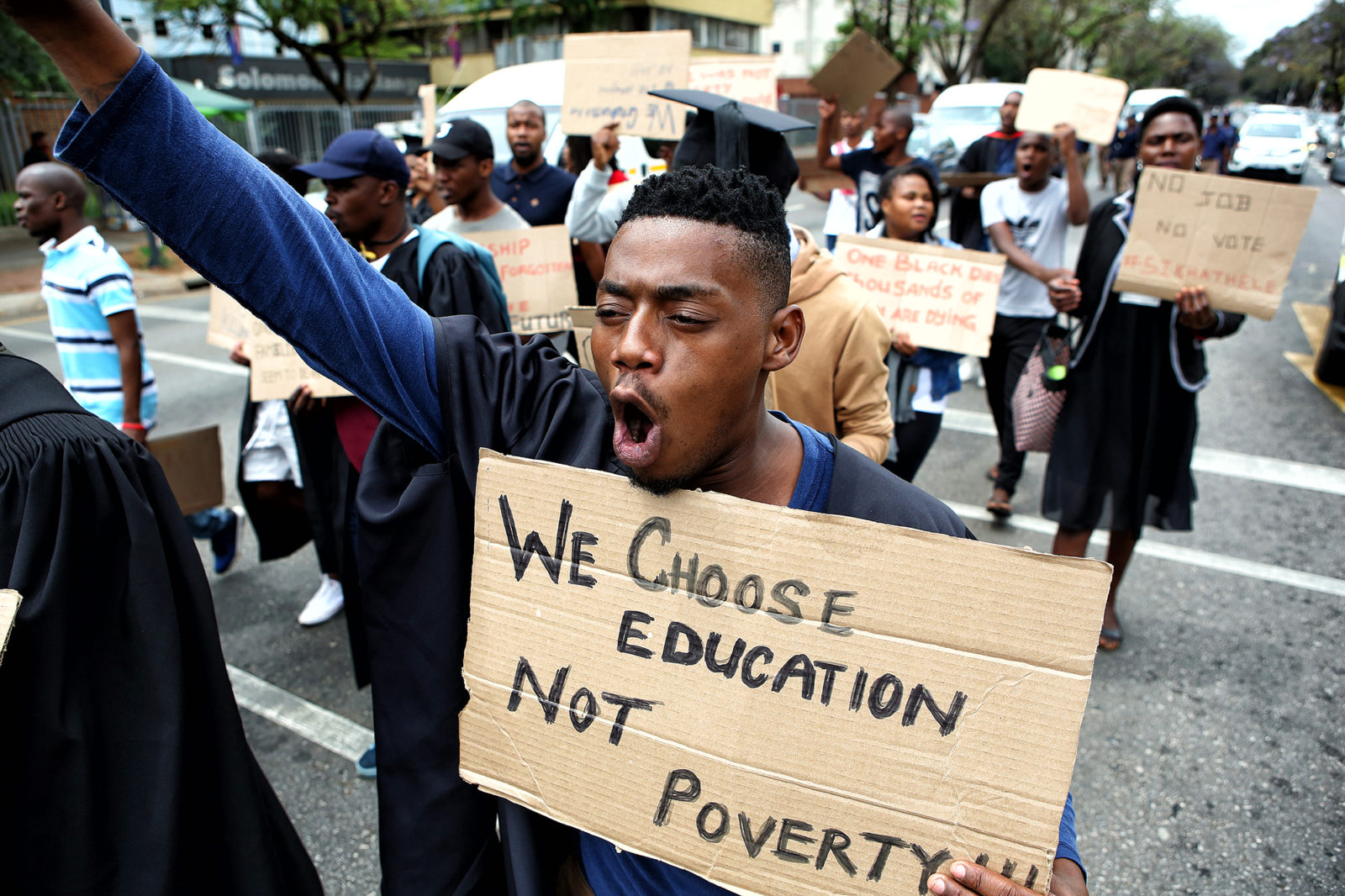 Unemployed graduates from KwaZulu-Natal and Pretoria march to the Union Buildings on November 06, 2018 in Pretoria, South Africa. (Photo by Gallo Images / Phill Magakoe)

South Africa was not the only economy in the region to suffer a lost decade or ‘nine wasted years’, to quote President Cyril Ramaphosa. In some ways mirroring Pretoria’s trajectory, many African economies have been racking up concerning levels of debt against a backdrop of relatively sluggish growth. Part of this stems from continued reliance on natural resources. The failure to diversify or industrialise is one reason why so much of the past decade has been lost.

A record was chalked up in 2018 for international bond issues from sub-Saharan Africa, according to the World Bank. On the one hand, this is a good sign. It demonstrates investor appetite for African debt and the region’s increased ability to tap global financial markets and sources of capital.

Yet there is a double edge to this sword. Debt levels across the world’s poorest continent are rising rapidly, and in many cases probably unsustainably, threatening the promise unleashed more than a decade ago when much of the region’s debt was forgiven.

In the early 2000s, Africa was in the throes of a debt crisis, with regional debt to gross domestic product (GDP) levels north of 90%. Much of this was effectively written off under the “Heavily Indebted Poor Country and Multilateral Debt Relief” initiative, championed by celebrities such as Bono. This was no bad thing and seemed to pay off. Most Africans had seen little or no benefit from the debt piles mounted by their governments, which were often squandered (think of guns versus butter). And this debt reduction coincided with an unprecedented acceleration in regional economic growth.

According to the World Bank’s latest Africa’s Pulse report — a bi-annual look at African economic issues — the median of the continent’s debt-to-GDP ratio by 2012 was down to a manageable 24%. Since then, growth has slowed markedly, while debt has ballooned. By 2018, median public debt as a ratio of GDP had reached 53%. Meanwhile, growth has cooled. The World Bank estimates sub-Saharan growth was 2.3% in 2018, the fourth straight year that the population grew faster than the economy.

And the nature of this debt is changing. The report says that 2018 was a record year for sub-Saharan international bond issuance, totalling more than $17-billion. The percentage of external debt climbed to 27% in 2017 from 18% in 2012, raising the exposure of African economies to debt denominated in foreign currencies.

“The increase in debt levels together with the shift of external debt toward more market-based instruments and more expensive and riskier sources of finance have increased debt vulnerabilities substantially,” the report says.

In layman’s terms: Eurobond holders are going to be a lot more reluctant to forgive or relieve debt than many of the big lenders in the past, which included governments and multilateral institutions.

“As of end-2018, nearly half of the countries in sub-Saharan Africa covered under the Low-Income Country Debt Sustainability Framework were at high risk of debt distress or in debt distress, more than double the number in 2013,” the report notes, rather ominously.

Part of the reason has been a failure — with some notable exceptions such as Ethiopia — to diversify meaningfully from an over-reliance on resources. When African growth rates were hot and debt was in decline, the value of exports from the region soared to $420-billion from $100-billion between 2000 and 2011. But that was largely the result of the commodity boom, with much of the underlying consumption fuelling that growth based on the income generated from resource exports.

“Eurobonds are a double-edged sword for African governments which may see the massive demand for African debt as a way to finance large projects now, but without preparing for the future. Zambia is a good example of this — the government has taken on several Eurobonds since 2012 on the back of high copper prices and a stronger currency, but the situation has reversed and the government is now on the verge of defaulting on its debt, particularly as its Eurobonds are about to mature,” said Shawn Duthie, an analyst with Africa Risk Consulting.

There are clear warning signs here for South Africa after its own lost years. The economy is barely expanding and like the rest of the region, GDP growth lags behind population growth. Debt has also been soaring. South Africa’s debt-to-GDP ratio was around 35% in 2010 and now stands at 56%.

Meanwhile, according to the Minerals Council, mineral products accounted for 27% of South Africa’s exports in 2017. That hardly puts the economy on a par with the likes of Zambia or Angola when it comes to resource dependence, but it means the trade and current account numbers are vulnerable to commodity boom and busts.

Like the rest of Africa, we are getting poorer and more highly in debt. There is a lot of ground across the region to make up after these lost years, and international lenders are unlikely to be as forgiving as they were in the past. DM