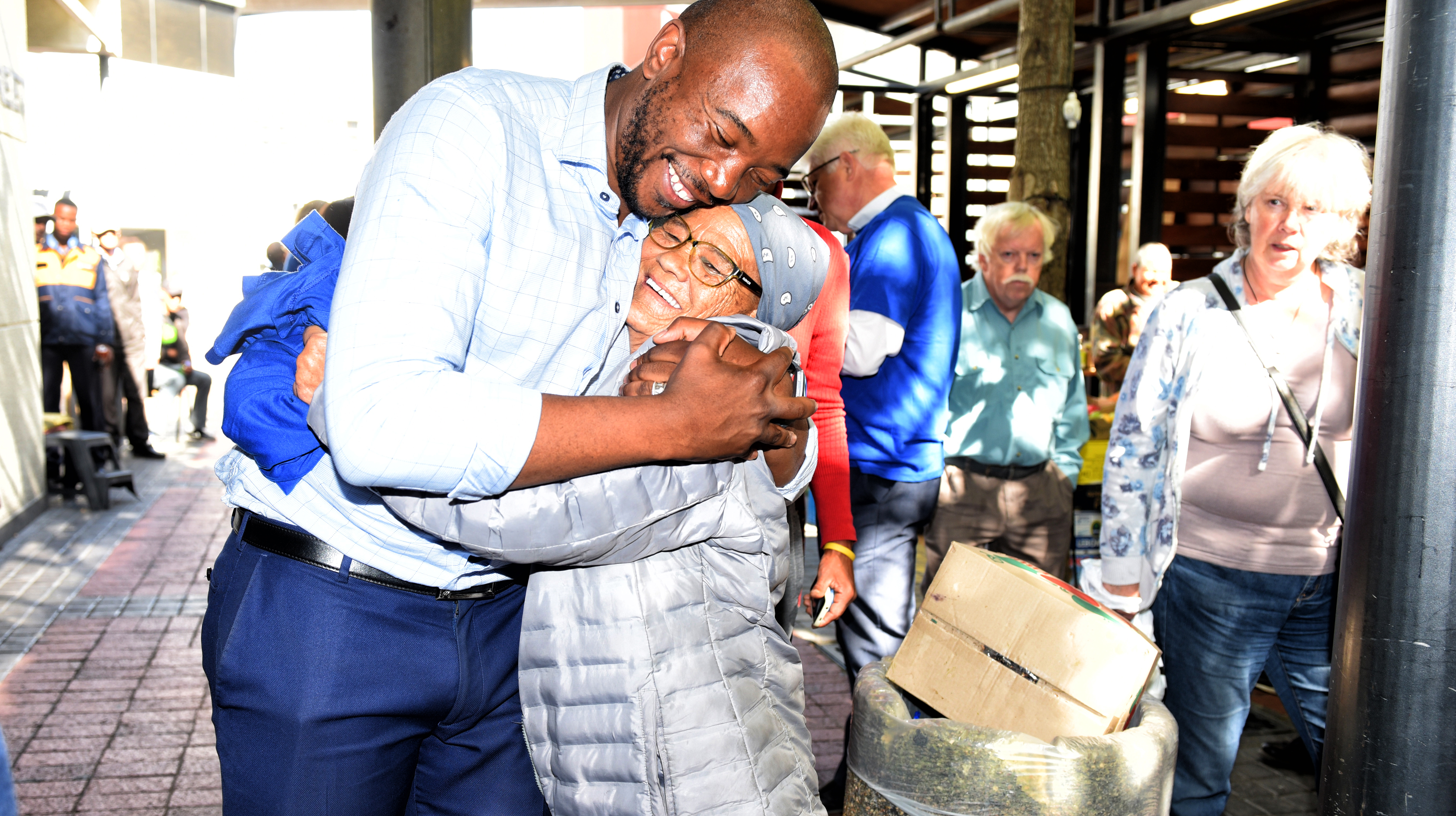 Democratic Alliance (DA) leader Mmusi Maimane interacts with Diane Honey at the Dreyer Street Market next to Cavendish Square on April 25, 2019 in Cape Town, South Africa. Maimane had visited the area as part of DA’s election campaign ahead of the national polls. (Photo by Gallo Images/Netwerk24/Edrea du Toit)

DA leader Mmusi Maimane finds himself in an unenviable position as the elections loom large. If the DA doesn’t enlarge its national support next week, he could find himself out of a job, and some pundits are already predicting that as his fate. But there are many imponderables in this election, not least how Gauteng voters will jump.

While almost no one has yet voted in our elections, it already appears that many are beginning the post-mortems of how the various parties have campaigned. Of course, one’s view of a campaign may well depend on where you stand: If you support the ANC you may well claim that it has been a strong and energising campaign, but you may have a different view if you wear blue, or red, to bed every night.

It seems some people are already beginning to examine the DA’s campaign, and particularly the role of its leader, Mmusi Maimane. He appears to be in a difficult position, and could be the first leader of the party not to increase its support in an election. If that does happen, he may not be the leader for much longer. But, there are important structural reasons as to why he has found himself in this position, and why any other leader would probably be in roughly the same place.

It seems almost common cause among voters that the DA has not had a strong campaign. It has been unable to dominate the campaign trail, and has found it difficult to lead the national agenda. Certainly, it has not been able to make its issues of competent governance and policy to grow the economy come to the fore.

Then there is the polling evidence. The DA may well take issue with some of the polls that have been produced so far. Claims that it may do less well than the EFF appear to defy all previous expectations of this election. But it does seem at the moment that a good result for the DA may simply be to stay level with its 2014 showing of 22%. Considering that both Tony Leon and Helen Zille were able to improve its support while they were in office, this would certainly be a disappointment to Maimane and his supporters.

It all seemed so different back when he was elected to the position in 2015. Then, it was obvious that he was the right man to take on then-president Jacob Zuma. His “broken man leading a broken country” speech in Parliament has been rightly praised as summing up the situation at the time. Generally speaking, his performances in Parliament received good airtime, and he was able to portray himself as the urban black future of the country, speaking truth to a man who derided people such as he as “clever blacks”.

The party seems unable to paper over its cracks, the argument about whether or not it still supports race-based redress (or affirmative action and BEE) refuses to disappear. Its handling of the Patricia de Lille issue in Cape Town made a mess of its reputation for competence, as did her handling of the water crisis in 2017/18.

But perhaps the worst problem for the party’s long-term future was the decision to go into informal coalition agreements with the EFF in Joburg and Tshwane. This has led to the perception, on the one hand, that it is involved in corruption (which it denies), and on the other to the possible fear of losing votes from white people who strongly disagree with the EFF (those votes may well go to the Freedom Front Plus).

All of this has damaged the party, possibly quite badly.

However, it is important to remember that almost none of this would have mattered if Nkosazana Dlamini Zuma had won the ANC’s Nasrec election. No one would be talking about those issues. Instead, the DA would be unified, and possibly the biggest force against the continuation of the perceived looting by former president Jacob Zuma.

Just this alone shows how much has changed around the DA, and Maimane as its head.

Recently, some research showed that Zille was more popular with DA voters than Maimane. Many reasons were advanced to explain this, including their different racial identities, and the idea that her age presented an advantage. But in the middle of it all was a strong suggestion that Zille had been a “strong” leader, while Maimane was “weak”.

While that cannot be discounted entirely, the shifting sands around the DA should also not be forgotten.

In British politics, there are those who compare current Prime Minister Theresa May rather unfavourably with Winston Churchill. But Churchill was leading a united government of different parties against an incredibly evil foe. May is trying to lead a divided party on the complex issue of Brexit.

For long, Zille was leading a united party against the foe of the Zuma ANC, while Maimane, of late, is leading a divided DA against President Cyril Ramaphosa.

In other words, while the personality of a leader obviously matters, it may be that the situation around them has changed significantly.

The other problem that the DA may well now be hitting is that it has simply gathered all of the votes that it can attain structurally in our society. Parties often have finite pools of potential voters, there are some voters who will never vote for it no matter what. So, some white voters would never vote for Julius Malema, some black voters will never vote for the DA. The DA has managed to get very high levels of voter turnout in the suburbs. But it may be that the structural limitation for them is in fact that very few voters who don’t live in suburbs will vote for them.

If that is the case, this is unlikely to change for quite some time. The DA could be limited by the very structure of our society.

However, the other aspect that those who write political obituaries for Maimane might miss is that the result of this election is about more than one number. While it is about the national figure, it is also about Gauteng.

Here again, it is what happens to the ANC that may matter most. If the ANC falls below 50% in Gauteng and the DA has a chance of forming some sort of government (and that would probably have to involve the EFF once again), then Maimane and the DA might both look as if they are still growing. Certainly, this would appear to be a solid result.

While there are those who have complained about the lacklustre nature of the DA’s campaign, the ANC’s campaign has also appeared to miss its usual razzmatazz, despite the identity of the man supposedly running it. This is for the same reason as the DA – it is not as united as it was, say, 10 years ago.

Both the ANC and the DA are suffering from the same problem – campaigning across racialised inequality is difficult to do, and it can lead to divisions within one’s own party. This is why the EFF’s message comes across so strongly and so clearly; it has only one well-defined constituency for which to cater. The ANC and the DA both have constituencies that are much broader, and therefore more complex, to attract.

There may well be those who are tempted to do that, while blaming him for the party’s shortcomings. But they might find that difficult to do in that there is for the moment no clear candidate who appears to be able to unite all of the DA’s different parts. Again, the problem is not so much the leader, as the structure of the party and the diverse groups within it, and the constituencies it represents.

This may well protect Maimane for some time after the polls. But, just like within the ANC, this election could well set a playing field for what comes after. DM