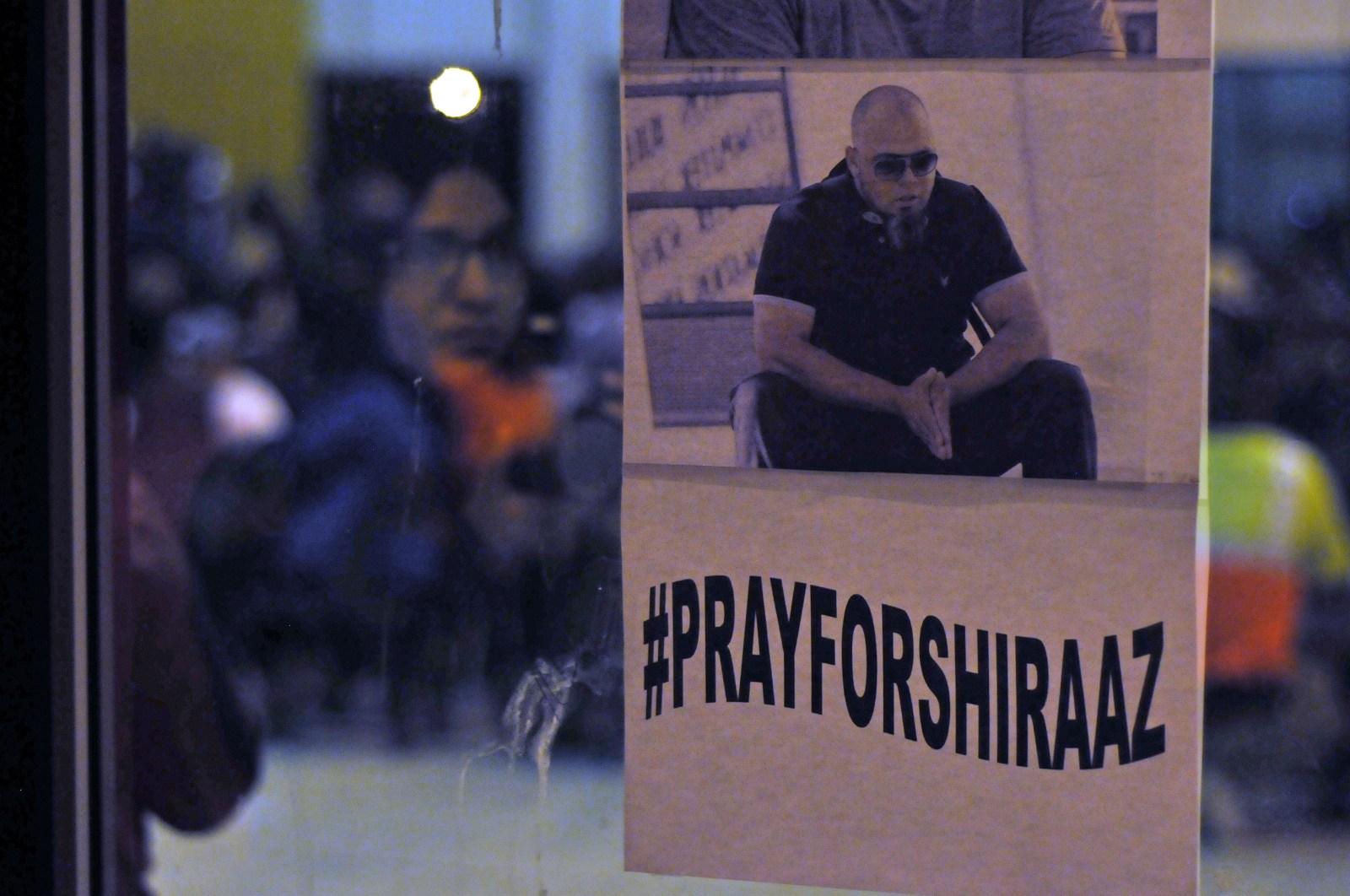 A woman is reflected next to a poster outside a community hall hosting a night vigil for kidnapped photojournalist Shiraaz Mohamed, on January 18, 2017 in Johannesburg, South Africa. Community members, friends, family and colleagues of photojournalist Shiraaz Mohamed held a night vigil at the Lenasia South Civic Centre. Mohamed was abducted in Syria on 10 January while working with the aid mission Gift of the Givers. (Photo by Gallo Images / Dino Lloyd)

A video sent to the NGO Gift of the Givers shows South African journalist Shiraaz Mohamed, abducted in Syria in early 2017, to be alive. In the video, dated 13 April, Mohamed said he fears for his life and begs for help from a number of people and organisations.

A new video shows abducted South African journalist Shiraaz Mohamed is alive, over two years after he was kidnapped in Syria.

In the video, sent to the NGO Gift of the Givers, Mohamed asks the international community for help securing his release while a man stands behind him, appearing to hold an assault rifle.

“Dr Imtiaz Sooliman, my South African President, my family, my friends, the international community, anyone that can help, I need your help in securing my freedom please,” Mohamed says.

Sooliman — the founder of Gift of the Givers — said in a statement on Sunday that the group has been attempting to trace Mohamed’s whereabouts since he was abducted.

“The proof of life video, made on 13 April 2019, arrived by WhatsApp at 10pm on 26 April. Shiraaz’s family was very emotional, ecstatic, full of hope and grateful to the Almighty. They knew for certain that Shiraaz was alive,” the statement reads.

Mohamed was kidnapped near the Gift of the Givers Ar Rahma Hospital in Darkoush, Syria in January 2017. According to the release, he’s a photojournalist who was documenting communities in Syria. He was accused of being a foreign spy.

According to a statement released at the time of his abduction, by the Committee to Protect Journalists, Mohamed had previously contributed to The Associated Press and the European Pressphoto Agency, but was not on assignment for either agency at the time.

In the video, Mohamed says he fears for his life and that Russian airstrikes are moving closer and closer to his location.

“It’s always about money”, he told SABC. “No matter what they tell you about religion, and good natured-ers and nobilists, it’s all lies. It’s only about money. It’s a business.”

The Department of International Relations and Co-operation said in a statement that it was aware of the video but would not give any further information. Dirco has continued to be in contact with Mohamed’s family, the statement said.

Gift of the Givers is an NGO that provides disaster relief in countries around the world. Sooliman said the group knows which group kidnapped Mohamed, but is not releasing that information at this time.

A number of journalists have been kidnapped in Syria since the start of the Syrian Civil War. In November 2012, American journalist James Foley and British journalist John Cantlie were abducted by Isis fighters. Foley was killed in 2014 and was the first American citizen to be killed by Isis.

In February, the British government said it believed Cantlie was still alive.

The war in Syria continues to rage on, even as Isis strongholds have been largely defeated. The war started after an Arab Spring uprising against President Bashar al-Assad in 2011, and has continued ever since. In March 2019, the Syrian Observatory for Human Rights said it had documented the deaths of 371,222 people on Syrian territory since the start of the civil war. DM