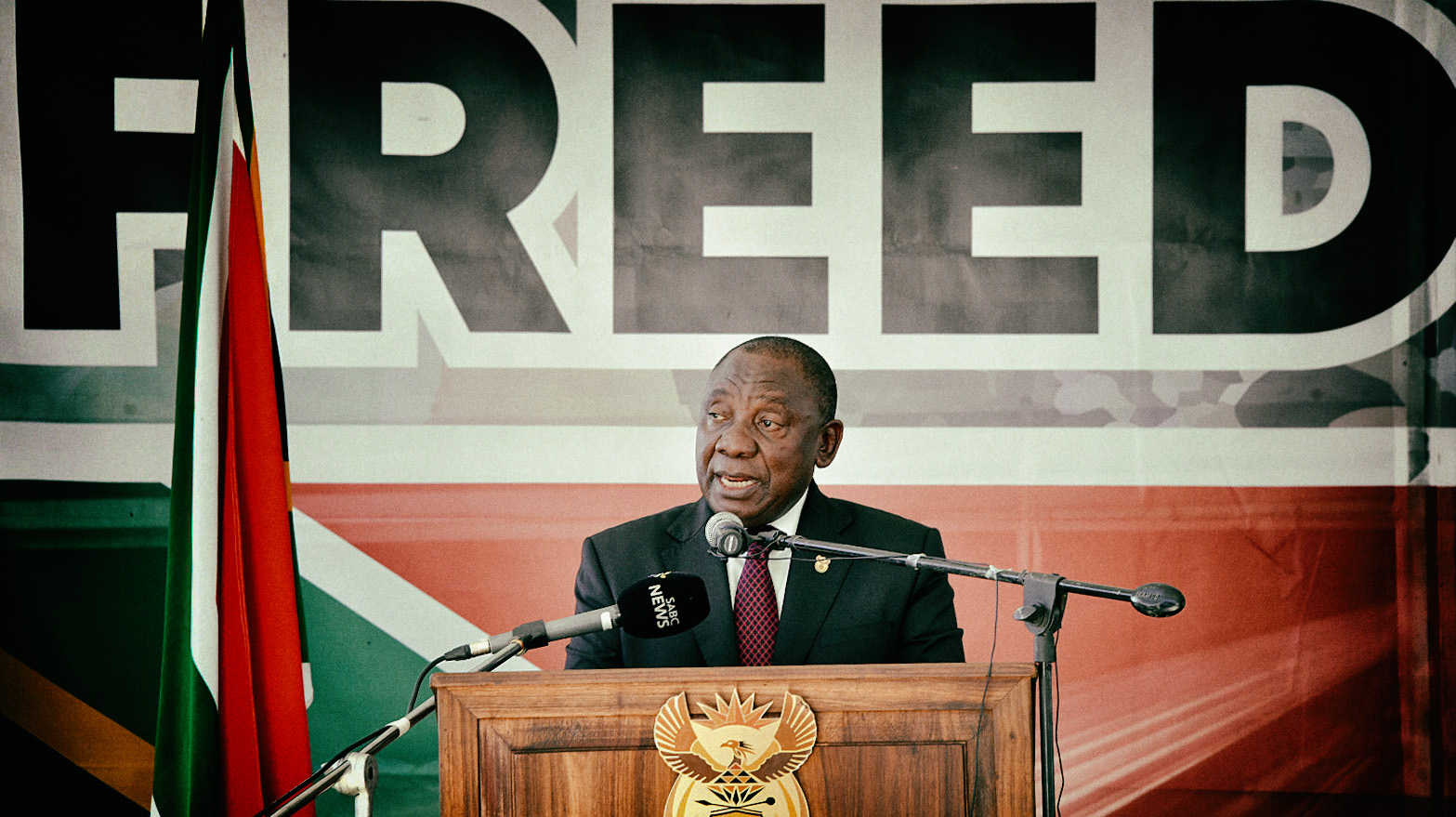 President Cyril Ramaphosa addresses the crowd while marking 25 years of freedom and democracy with his keynote address at the Freedom Day national commemoration in Makhanda, Eastern Cape , South Africa, 27 May 2017. EPA-EFE/Elmond Jiyane

Even as President Cyril Ramaphosa celebrated Freedom Day by saying the right things, the uncomfortable reality of how far South Africa still has to go stared him in the face from the audience on their plastic chairs in a large white marquee in Makhanda.

It was an unapologetically ANC gathering. The way a small group of ANC supporters shooed a smaller group of EFF supporters away from the venue afterwards, singing a song translating to “get out, you nonsense”, attested to how it was perceived by many of those attending.

There were some traditional leaders and what appeared to be diplomats, but a very large portion of the crowd wore ANC regalia and sang party campaign songs composed before its 2017 conference in Nasrec — and are still alive for the elections campaign. Many of the songs were in honour of The ANC’s elected leader, President Cyril Ramaphosa.

The choir after his speech also performed a song with his name in it, and Ramaphosa got up and enthusiastically danced with the choir, Madiba-style. If it weren’t for Ramaphosa’s speech, it could have been mistaken for a posh ANC rally in a marquee the size of a really, really big church, covering a soccer field.

Ramaphosa himself is likely to be aware of the separation that should exist between party and state, but with the Freedom Day event sandwiched neatly midway between his three-day ANC election campaign in the Eastern Cape — from Butterworth down to Uitenhage and back to Mthatha again — it must have taken some doing on his part to take off the ANC T-shirt and to put on a suit.

The speech was all you’d expect from a Freedom Day speech, highlighting the “Frontier War” battles against colonialism around that town. It was recently still named after the British Colonel John Graham, who was known to have caused much bloodshed and pain. The quaint, but run-down town was in 2018 renamed after the warrior, sangoma and prophet, iqhawe Makhanda ka Nxele, who led the attack on the British garrison and Graham here, 200 years ago.

“Despite the passage of time, it is a day we remember vividly — the exhilaration of seeing nearly 20 million South Africans of all races waiting patiently at polling stations around the country to cast their ballots.

“For those of a certain age, we remember the moment we placed a cross on a ballot paper for the first time in our lives.”

Ramaphosa remembered how much had been achieved — in terms of providing homes, electricity, water, and of beginning to try to undo apartheid’s harm — but how much still has to be done.

“We cannot be a nation of free people when the residents of places like Makhanda have to go for so long without a reliable supply of clean water.”

At this point the crowd cheered loudly because they know what he’s talking about — the queues for some of the 60,000 two-litre bottles of drinking water at the Gift of the Givers trucks attested to that. (The organisation’s almost two-month intervention in the town, stricken with severe drought and mismanagement, is coming to an end now.)

“We cannot be a nation of free people when funds meant for the poor are wasted, lost or stolen,” Ramaphosa said, and there were more cheers because in Makhanda the fruits of that are visible in the potholed roads and some of the general dereliction.

Ramaphosa called for social coherence. Recalling the divisions apartheid had brought, he called on those still pledging allegiance to the old South African flag to stop, and in the same breath he called for an end to xenophobia.

“Out of respect for our Constitution — and in defence of our freedom — we reject racism, we reject the pledging of allegiance to a racist past and its symbols, we reject attacks on those who have sought refuge in our country and we reject violence, insurrection and disregard for the rule of law.”

Even though Freedom Day saw few massive public displays of the South African flag — as is the case in some other countries during national day celebrations, notably in the United States on the Fourth of July — Ramaphosa called on people to be proudly South African:

“Regardless of race, creed, disability, sexual orientation, religion or social standing, we share as a source of pride the name ‘South African’.

“This was supposed to be an event of the people, not political parties, but the mere fact that they mobilised their own membership to come here, it sent the wrong messages to us, that’s why we had to come. Coming here we had to spend 10 to 30 minutes right at the entrance because we were not allowed to come in because of our T-shirts.”

She said they were let in only after the police at the entrance were given clearance by their superiors, but by then they had missed Ramaphosa’s speech.

Arts and Culture minister Nathi Mthethwa confirmed that for the past few years opposition leaders had not been invited to speak on stage as this made proceedings extremely lengthy. No specific invitations were sent out for any to attend (it was an open invitation, Mthethwa added). Opposition parties ended up using the day — 11 days before the 8 May elections — to hold their own Freedom Day rallies.

At this government-sponsored-cum-ANC event, there was an inspection of the armed forces, a flypast by ear-piercing Silver Falcons, and speeches by the president, premier and mayor. The rest of what must have been a considerable expense for the organisation of the event and the provision of thousands of sandwich, fruit and chicken lunch packs was justified by a long culture and entertainment programme.

Many in the audience were children, and although they were probably the reason for much of the restlessness and noise in the marquee as Ramaphosa was speaking, they did seem entertained. Some of this they will take into the future, but what that will be 25 years from now remains to be seen.

Although the ANC  played a large part in the road to 27 April 1994, it didn’t get to the goalpost on its own. Airbrushing history could make for a distorted picture in the future. DM