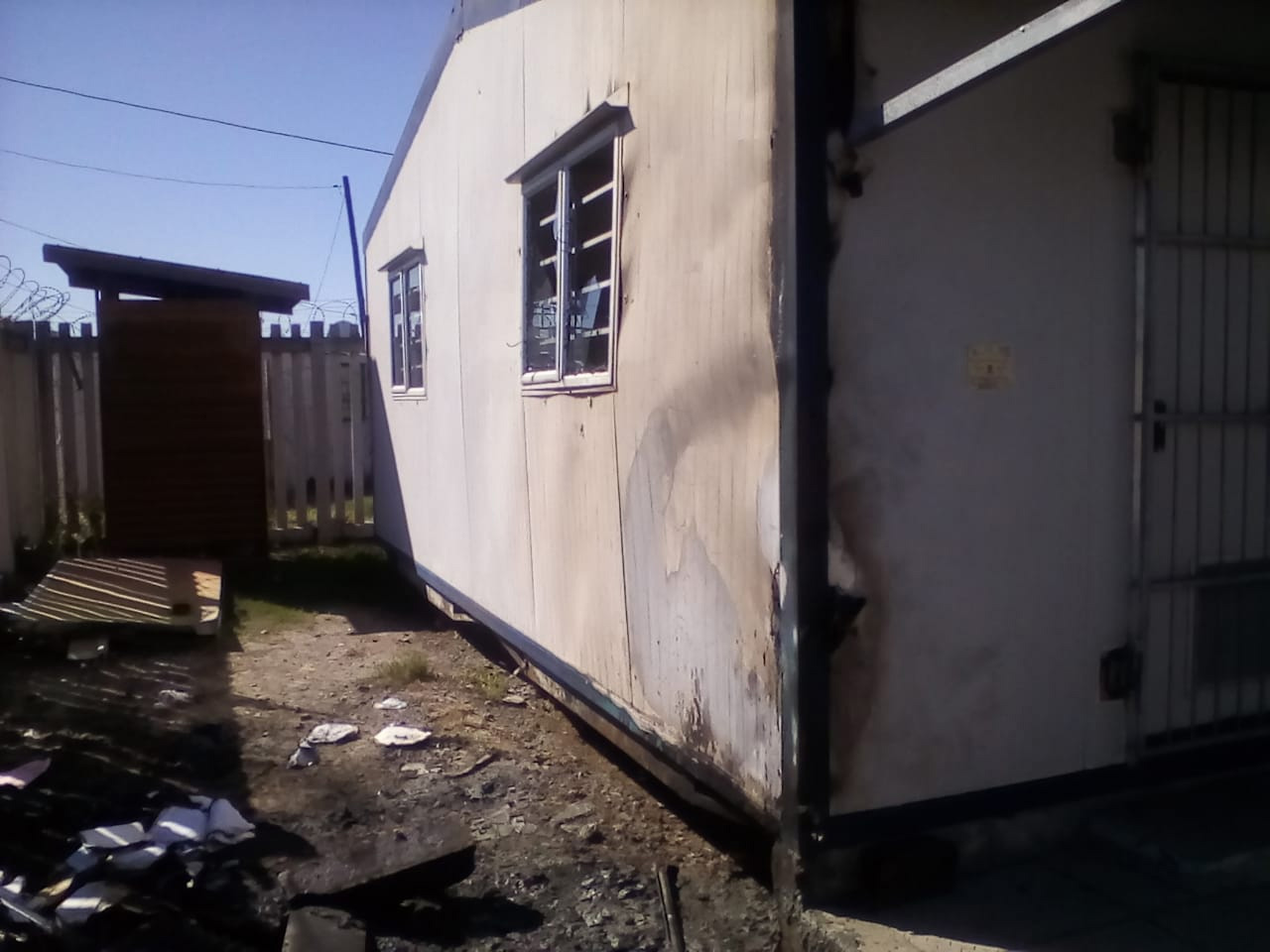 This wellness centre in Khayelitsha, started by Medecins Sans Frontieres several years ago, was burnt in a protest on Thursday morning. Photo: Vincent Lali

Angry protesters from QQ section, who demanded to be relocated to Mfuleni, burnt a community clinic in France informal settlement, Khayelitsha, at about 6am on Thursday. The demonstrators smashed windows of the community clinic, chased a guard away, and forced it to shut down, said France community leader Noziphiwo Lokhwe.

She said, “The protesters moved towards our community hall and threatened to burn it, but the police intervened and dispersed them.”

Lokhwe condemned the torching of the community clinic. “We don’t go along with the destruction of our clinic. It’s unacceptable,” she said.

This type of clinic is called a wellness centre. It was set up by the Nobel Peace Prize-winning humanitarian organisation Medecins Sans Frontieres (also known as Doctors Without Borders or MSF) several years ago and has since been taken over by the provincial government. The damage doesn’t appear to be too bad, but it was still closed on Friday. There are shards of glass and patient files strewn on the floor inside.

Lokhwe said shack dwellers would now struggle to get medical attention. “The clinic helps us with tests for chronic diseases. Now we will have to travel long distances to other areas to get treatment,” she said. “Kids could not go to school today because the violent demonstration prevented transport from coming to collect them.”

Lokhwe said the QQ residents started to protest a few days before the Easter weekend. “They went on a rampage, robbing Somali traders of their stock and a Clover bakkie of milk, yoghurt, cheese and other things,” she said.

Ward councillor Monde Nqulwana said: “We are already complaining about long queues at Khayelitsha Day Hospital. Now the lines will be longer as the residents will have to get treatment from the day hospital which they used to get from the burnt clinic.”

Throughout the morning, the protesters blocked Japhta Masemola Road with burning tyres, various objects and a shipping container.

Cops tried unsuccessfully to disperse them as they regrouped and burnt objects again, preventing traffic from moving along the busy road.

Community leader Sikho Lerumo said QQ shack dwellers demanded electricity and toilets. “We want to be relocated to a serviced site in Mfuleni because we are not accessing basic services where we stay now,” he said. “If the City can’t move us somewhere, it must provide us with basic services.”

The shack dwellers had been living in QQ section without basic services since 1987, Lerumo said.

“Because we can’t even boil water, most of us bathe with cold water before we go to work. Learners can’t do their school work at night because they have no electricity to light their homes.”

“Other residents also stay under high voltage power lines nearby and the City has installed electricity for them. Why can’t the City give us electricity as well?” said Lerumo.

About the torching of the community clinic, Lerumo said: “Residents burn state property to announce to government that there is a protest going on and that we want attention.”

Community leader Mzukisi Gidi said, “The torching of the clinic is trivial because we are still going to do worse things if the City of Cape Town doesn’t deal with our demands.”

“We will protest until Jesus comes back if the City doesn’t come and address us,” he said. Gidi said the angry shack dwellers would prevent the IEC from putting up voting stations in QQ Section and nearby informal settlements.

“We know they will erect voting stations here soon. We will burn them as we are not going to vote,” he said. Gidi said he and other shack dwellers are outraged that they don’t enjoy the same basic services as other South Africans.

“We’re not benefiting from the advent of democracy as if we QQ residents are not South Africans. We are prepared to die to ensure we get basic services like everybody else,” he said.

Protester Luyanda Memani said he grew up in QQ section without access to basic services. “We are angry because our mothers walk long distances in the rain and pay between R30 and R50 to relieve themselves in toilets located in other areas,” he said. “Our lives are in constant danger as fires travel through illegally connected wires and burn our shacks.

Nqulwana confirmed that the City and Eskom made a decision not to install electricity in QQ Section because the shack dwellers stay under high-voltage power lines. In January 2019, he proposed to the City that about 700 families staying in QQ section be moved to a place where they could get basic services. “The council approved the motion and now it is part of the City’s programme.” DM