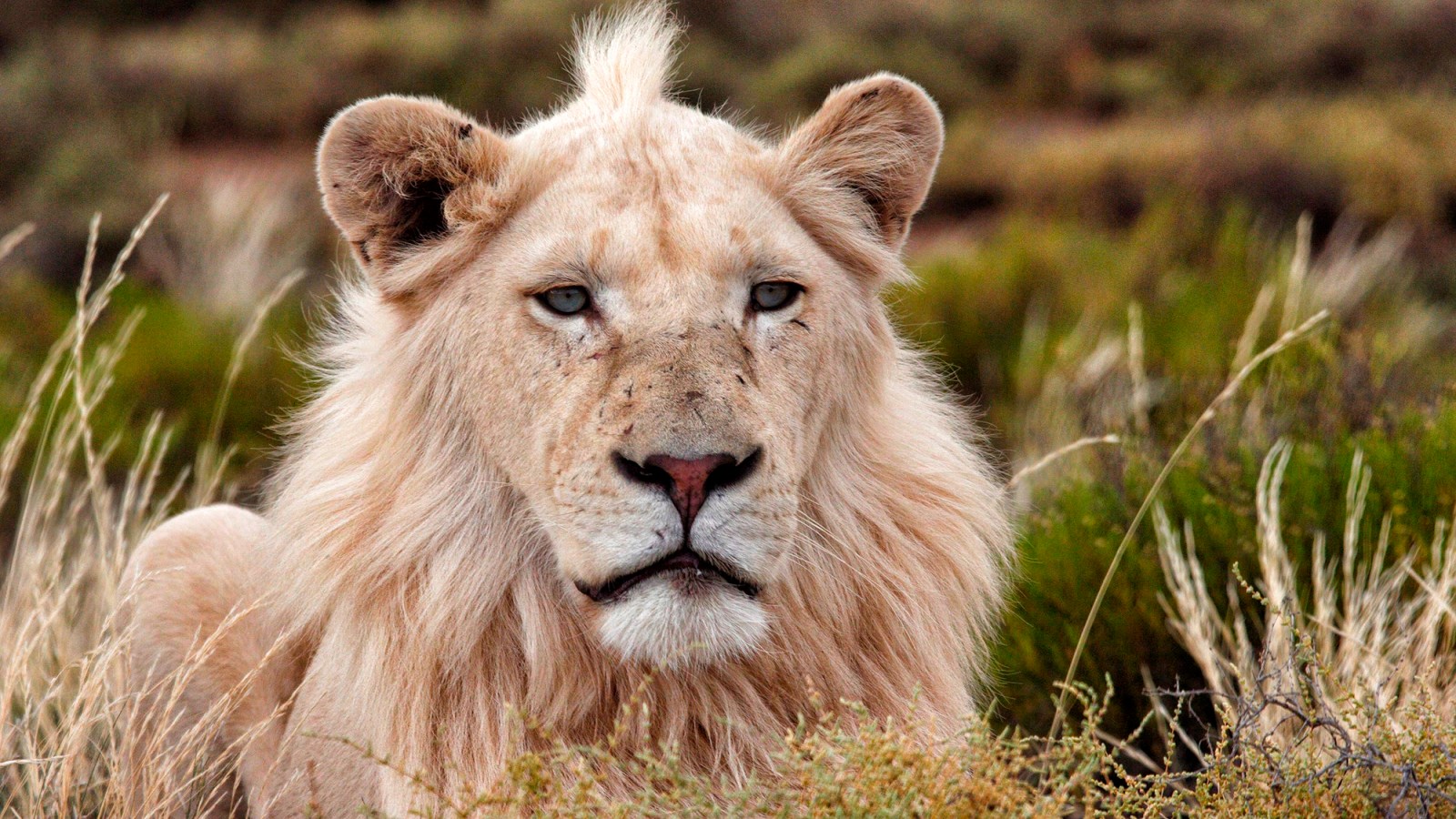 A male white lion, part of a rare white lion pack, in the wild in South Africa. (PHOTO: EPA/LIESL EICHENBERGER)

Trophy hunting has historically been the preserve of colonial, white males. The only thing that has really changed is that the white males are no longer colonials, but come from all over the world to hunt Africa’s wild animals. Their weapons are high-powered, precise, and often a product of developments in military technology. Part one of a two-part series.

The squirrel that you kill in jest, dies in earnest. – Henry David Thoreau

It’s time to take stock of trophy hunting. For most of our existence as Homo sapiens, we have been hunters as well as gatherers. Trophy hunting, however, is something else entirely.

It’s not rooted in our deep, instinctive past, as hunters will often claim, but in the relatively recent conquest of foreign lands and the invention of devices that hurl projectiles from a safe distance.

“Sport” hunting is driven, neither by the need for food nor for conservation in a time of the planetary biological collapse, but by money and the desire to hang a reconstructed “conquest” on the wall or walk on its flayed skin in the hallway.

Who, exactly, are these people depleting the African gene pool of the best-looking and often endangered creatures so essential to the survival of their species? Does their cash, as they claim, really go to the protection of those animals that survive their guns? Is it really sustainable to kill one wild animal to protect another?

The sport incorporates the possibility of losing. But with trophy hunting, the deck is stacked. The industry of death-delivering instruments – a division of the military complex – is vast. It offers beautifully crafted, high-powered rifles with sophisticated telescopic sights so hunters can stay far from their “dangerous” quarry. In some instances, helicopters, microlights, drones and GPS will be used to track target animals.

There’s a wide choice of ordnance designed to penetrate deep or explode into lethal fragments on hitting bone. There are high-performance compound bows and flesh-penetrating arrows from modern iterations of ancient crossbows.

Weapons will, as usual, be displayed alongside stuffed animals and outfitters offering exclusive safaris to foreign countries, thrilling hunts, first-rate taxidermists and safe passage of trophies to the doorstep. In this brand of hunting, is there really a chance of losing the game?

Those who frequent such shows are most often members of hunt clubs, a number in Southern Africa and, to the north, mostly the United States, though the tradition is spreading in the Middle and Far East (China is about to host a large hunt show in Beijing).

In Africa, membership of these clubs has a very colonial-looking social demographic. In South Africa – using surnames as a rough guide – the Professional Hunters Association of SA has 453 Afrikaans speakers, 232 English, German or Portuguese speakers and eight who speak an African language.

Membership of the newer Custodians of Professional Hunting and Conservation is 65 Afrikaans, 47 English, seven African and one woman.

Hunters are supported by powerful lobby groups such as Safari Club International (SCI) which promotes prestigious awards for excess. To get on the African Big Five Grand Slam list, a hunter needs to kill an elephant, a rhino, a lion, a leopard and a buffalo. The African 29 award demands a minimum of 29 African wildlife kills.

It lists the biggest and the best trophies for bragging rights and has helped to erode the principles of fair chase. This is because some clients don’t care how their trophy is obtained as long as it gets into the SCI record book. Trophy hunters are therefore dis-incentivised from killing weak and ageing animals, an ecosystem service that is often promoted as justification.

Hunters also get preferential treatment from the United Nations through its Convention on International Trade in Endangered Species of Wild Fauna and Flora (Cites) which deals with wildlife trade. A loophole allows trophy hunters to kill even Appendix 1 species, the most critically endangered wildlife. A poacher may not kill an elephant to sell its tusks. But a trophy hunter can legally kill the same elephant and export the same tusks.

Notorious hunters from the colonial era, who described their hunting expeditions in a minute and bloodthirsty detail, are idolised in modern hunting publications, which carry similar stories of modern-day hunting trips.

One self-proclaimed modern hunting hero is responsible for thousands of killings. Former Zimbabwe ranger Ron Thomson claims to have shot 5,000 elephants as well as 800 buffalo, 50 to 60 lions, 30 to 40 leopards and around 50 hippos. He is urging Botswana to lift its ban on elephant trophy hunting and personally presented President Mokgweetsi Masisi with a copy of one of his books. His book God Created Man the Hunter says it all.

He told The Times he has no conscience about killing animals, saying Africa has too many elephants.

“I didn’t have any sentiment. I’m totally unrepentant, a hundred – ten thousand – times over for any of the hunting I’ve done because that’s not the problem.”’ He previously told The Guardian: “It was a great thrill to me, to be very honest.” Trophy hunters may think him a hero, but he should be tried for crimes against nature. Future generations will not judge him well.

What about the impact of trophy hunting on the animals themselves? Hunters claim that they kill “humanely”. But according to a report by the Campaign to Ban Trophy Hunting released in April 2019, the demand for “perfect trophies” increases the likelihood of pain and suffering. This is not simply because many hunters are bad shots, but because they avoid head shots most likely to result in instant death as this ruins a trophy destined for mounting. This is simply cruel.

A 2016 report on commercial hunting in South Africa, Namibia, Zimbabwe and Tanzania by the US House Committee on Natural Resources concluded that “significant questions remain about whether or not trophy hunting is sustainable”.

It found that it was directly responsible for population declines of big cats, particularly lions. The report found trophy hunting and poaching were outpacing the reproductive rate of elephants.

The killing of wild animals by hunters is considerable. According to the CBTH report, elephant trophy hunting has soared since Cites came into force in 1975, despite the ivory trade ban in 1989. In 1985, trophy hunters from 19 countries shot 929 elephants carrying 645kg of ivory. By 2015 this had jumped to 3,699 trophies plus 7,591kg of ivory taken by hunters from 47 countries. This represents a four-fold increase in numbers of trophies and a 1,200% jump in the amount of ivory.

The report named Austria, Britain, Canada, China, France, Germany, Italy, Mexico, Russia, South Africa, Spain and the US as the “Deadly Dozen”, countries from which the most trophy hunters originate, with the US topping the list.

Biologists have often claimed that hunting the biggest and best animals within a species dilutes the gene pool. According to former Namibian professional hunter Johannes Haasbroek, “when you hunt for a trophy, you look for the biggest and best animal you can find for your client. It is very likely to be an animal in his breeding prime… trophy hunting manipulates the genetic stock over time by eradicating the carriers of the largest horns and tusks”.

An alarming new study – A century of decline: Loss of genetic diversity – has proved this. It found that lions shot by colonial hunters more than 100 years ago were 17% more genetically diverse than the ones that now populate Africa.

According to the researchers, the discovery is worrying because it indicates that the species’ fight to survive – especially as the climate changes – may be even more difficult than had been previously thought.

Comparing DNA from late 19th century museum exhibits and present-day lions in Southern Africa, the study noted that “the rapid decline observed in allelic richness and the highest levels of genetic differentiation coincide with the arrival of the first western settlers in 1890 and the subsequent rise of the colonial presence in the region after the end of the Matabele Wars in 1897”.

Reducing lion populations to islands within a sea of humanity further reduces the gene pool and increases inbreeding.

Trophy hunting in Africa has deep colonial roots with tendrils in the present. They should have been pruned back. But mainly white male hunters, backed by wealthy lobby organisations, rifle manufacturers and strategic marketing, are turning those roots into a tree whose fruit is weaponry, mounted trophies, hubris and death.

Hunting is, of course, not solely to blame for the world’s wildlife crisis. Poaching and human encroachment do more damage. But in the face of such catastrophic levels of biological collapse, can we really permit rich white men to kill iconic wild animals and deplete the gene pool … for sport?

We really need to stop hunting Africa’s iconic animals. They become trophies of nothing more than human ignorance and cruelty. Fortunately, the writing is on the wall for the industry, which will be explored in Part 2: End of the game.

To quote Michele Pickover: “The time is overdue for individuals, civil society and governments to recognise animals as complex, living beings, rather than as tools, objects and trophies.” DM